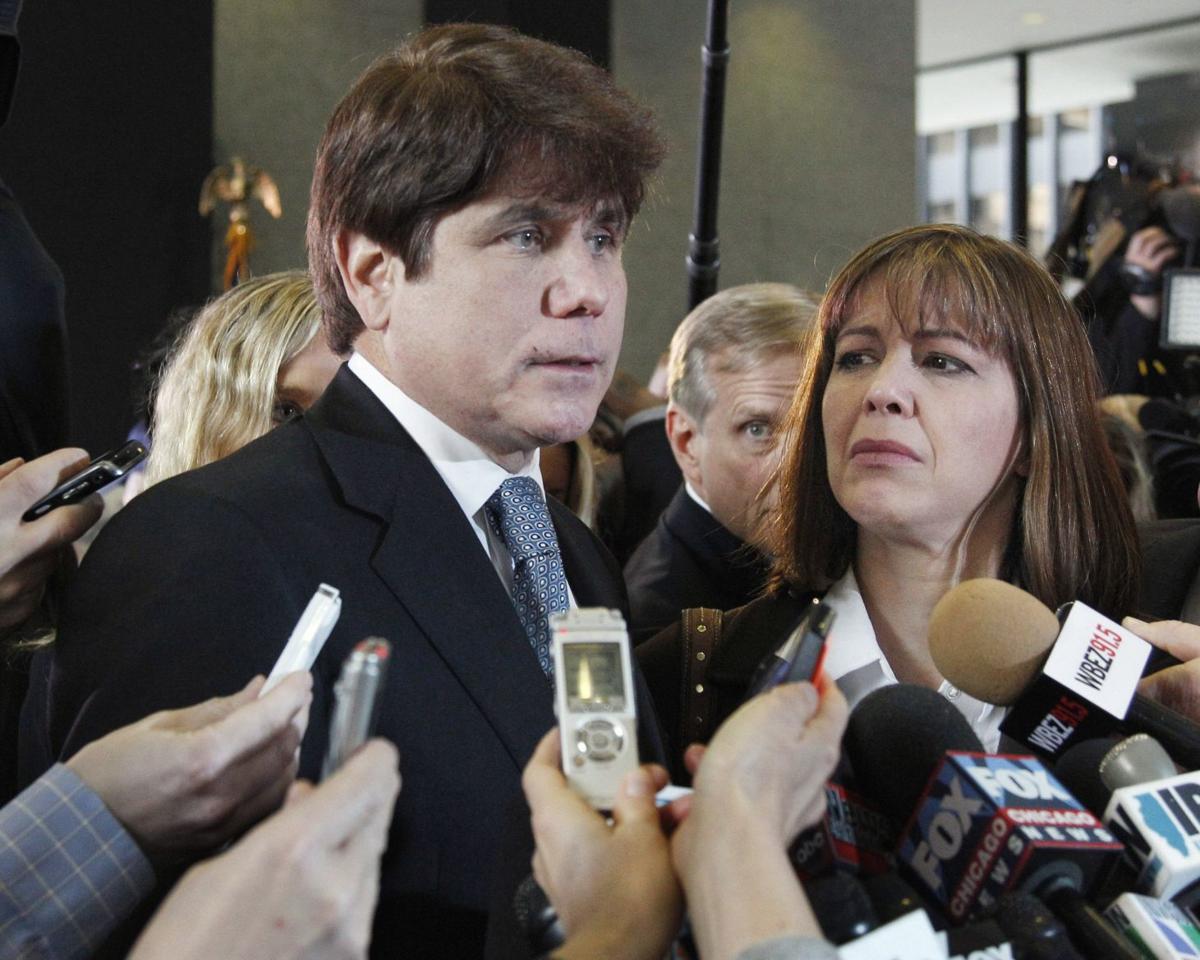 FILE - In this Dec. 7, 2011 file photo, former Illinois Gov. Rod Blagojevich, left, speaks to reporters as his wife, Patti, listens at the federal building in Chicago, after Blagojevich was sentenced to 14 years on 18 corruption counts. On Monday, March 28, 2016, the U.S. Supreme Court rejected Blagojevich's appeal of his corruption convictions that included his attempt to sell the vacant Senate seat once occupied by President Barack Obama. (AP Photo/M. Spencer Green, File) 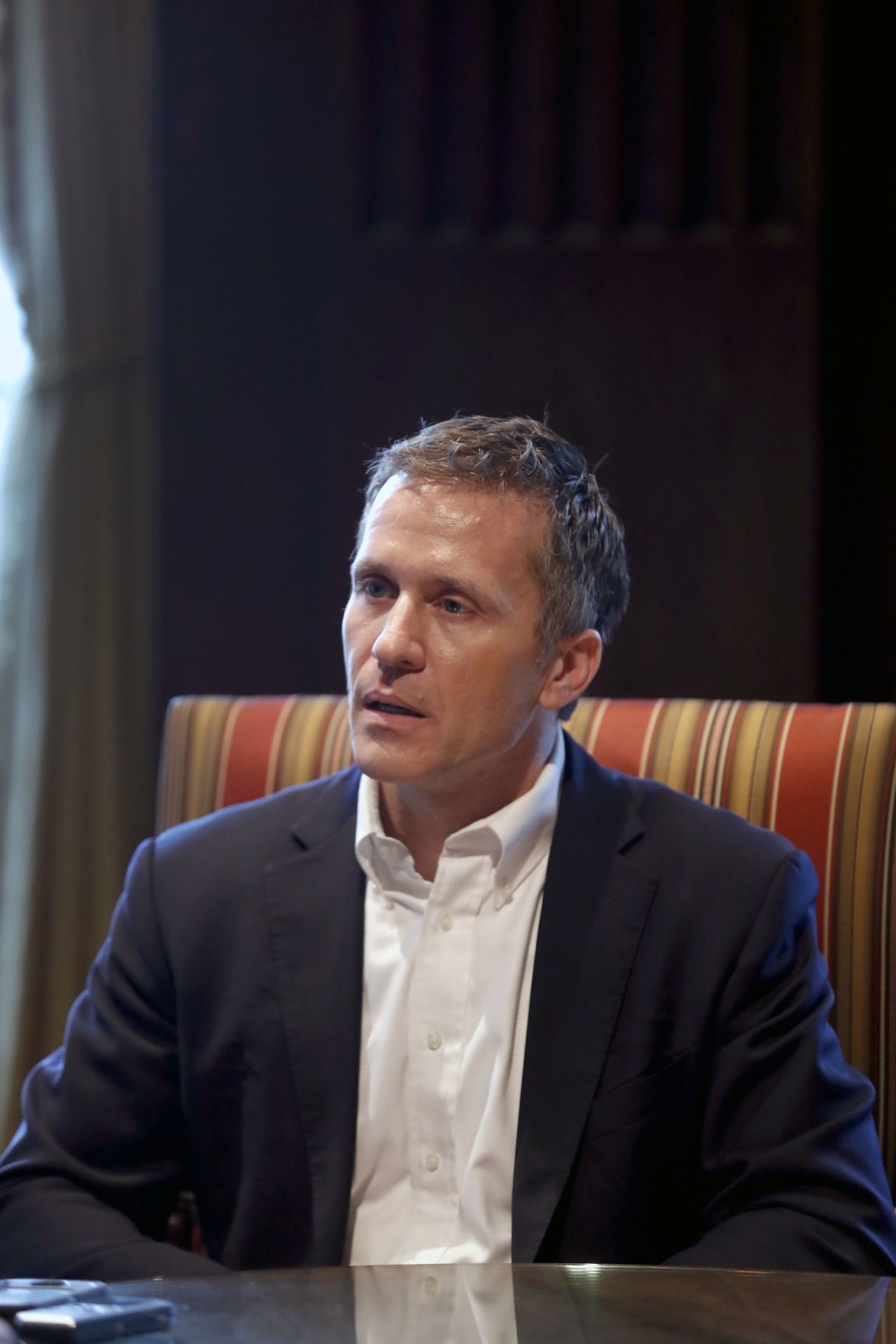 Missouri Gov. Eric Greitens speaks during an interview in his office at the Missouri Capitol Saturday, Jan. 20, 2018, in Jefferson City, Mo. Greitens discussed having an extramarital affair in 2015 before taking office. (AP Photo/Jeff Roberson)

The state’s budget was in trouble and its governor was facing a criminal trial. Those two realities alone, one newspaper argued, meant it was time for drastic action.

“[T]he state faces … an abundance of difficult choices of what to fund and what to cut,” the paper wrote in an editorial the day after his arrest. The state, it said, “needs a governor who can lead through this crisis.” It noted the charges against him weren’t yet proven, but were “credible,” and “render him … unable to serve.”

“He is, more than before, the governor who cannot govern,” declared the paper. “Governor, resign.”

The newspaper was the Chicago Tribune; the governor was Rod Blagojevich of Illinois. To the surprise of no one, Blagojevich didn’t heed the advice of that editorial on Dec. 10, 2008, waiting instead for the Legislature to pry him out of office like a twisted nail almost two months later.

Only later still was he tried, convicted and sentenced to federal prison, where he still resides.

Indicted Missouri Gov. Eric Greitens’ situation is different than Blagojevich’s in many ways. Blagojevich, a Democrat, was convicted on federal corruption charges stemming from his actions as governor. Greitens, a Republican, is accused of violating the state’s invasion-of-privacy law during an extramarital affair before his election.

But the argument in that editorial, written prior to substantive action in Blagojevich’s trial, is one that is already building around Greitens: that his approaching legal travails, regardless of any eventual verdict, make it impossible for him to do his job.

“It is hard to see how he can be an effective governor, or leader of the Missouri Republican Party, while fighting a criminal case in court,” state Rep. Shamed Dogan, R-Ballwin, told reporters last week in announcing a letter signed by about a dozen Republicans calling for Greitens’ resignation. “We hope that he will act in the best interests of the people of Missouri and put an end to this episode.”

Greitens was indicted by a St. Louis grand jury Feb. 22 on a charge of felony invasion of privacy, for allegedly snapping a photo without permission during an otherwise consensual sexual encounter with his bound, blindfolded and semi-nude lover in 2015, as he was preparing to run for governor. The Missouri statute carries a potential four-year prison sentence. (The indictment doesn’t address the woman’s recorded allegation that Greitens threatened to use the photo against her if she told of the affair.)

A grand jury indictment is just an alternate way of charging someone with a crime. Like any other criminal charge, it isn’t a conviction. Nonetheless, talk of resignation or impeachment began almost immediately, including from members of Greitens’ own party.

Now, as in Illinois almost 10 years ago, the question of removing an accused-but-not-yet-tried governor puts two American principles into conflict: the right of the accused to be presumed innocent until proven guilty; and the right of taxpaying citizens to get full service from elected officials without being distracted by mounting a defense in a criminal trial.

“It is not my position to determine the governor’s guilt or innocence. That is for a court to decide,” Senate Majority Floor Leader Mike Kehoe, R-Jefferson City, said in a statement shortly after Greitens’ indictment came out. “However, the news … causes me to question whether the governor has the ability to effectively lead the state going forward.”

Another question is the precedent that’s set when an elected official faces possible removal from office based on charges that haven’t yet been proven — especially when, as in this case, the prosecutor is of a different political party than the accused.

Greitens has alleged that St. Louis Circuit Attorney Kim Gardner, a Democrat, is pursuing the criminal case for partisan reasons. There’s no proof of that claim. But there’s also no question that, should Greitens be forced out of office and then the criminal case against him fails, Democrats will have gotten a major political victory from an allegation that was ultimately shown to be too weak to stand up in court.

“It would be a gross abuse of our legal system” to remove Greitens prior to a conviction, said attorney Catherine Hanaway, a former Greitens election opponent who now represents his campaign and a Greitens-related nonprofit political committee. “It sets on its head the notion that people are innocent until proven guilty.”

On the other hand, the practical problems of a governor trying to govern while under indictment are real. One example is in the state budget process.

As with past governors, Greitens has an annual spending plan — about $27.8 billion this year — that he is trying to get the Legislature to pass. It’s a process that generally involves the governor’s personal interaction with legislators, the media and the public, relationships that are exponentially more difficult for him now than before this all started.

Even a critical media report can be helpful in getting out information about a budget proposal. Since the scandal began, Greitens has been virtually inaccessible to reporters, who he knows will want to ask him about things other than his budget.

Greitens has called on the Legislature to enact Missouri tax cuts similar to controversial federal tax cuts passed last year. Selling that idea to some lawmakers was going to be tough for Greitens even without an indictment hanging over his head.

“I don’t want to leave a big problem for folks coming ahead of me,” Sen. Dan Brown, a Rolla Republican who chairs the powerful Senate Appropriations Committee, said last week.

Greitens has toured the state to promote the plan, but legislative support hasn’t followed. In the news hierarchy, budget speeches invariably draw less attention than a pending criminal case. Some of the lawmakers he will have to woo have stated publicly they think he should resign.

The rift between Greitens and the Legislature was highlighted on Thursday, when the governor unveiled a proposed change to his budget, calling for using an unexpected windfall of $80 million to finance an initiative to expand broadband internet access in rural areas. Instead of rallying behind that idea, Greitens’ fellow Republicans have voiced other ideas for the money, including restoring higher education funding.

Former Missouri Republican Party Chairman John Hancock alleged the charge against Greitens is “a political indictment,” and a “pretty bogus” one. But he said that doesn’t lessen its political impact. “It’s two distinct things, the political process and the legal reality,” Hancock said. “The standard for resignation isn’t necessarily just guilt or innocence. It’s: ‘Can you do the job?’ “

Part of Greitens’ problem stems from another similarity between him and Blagojevich. Like his Illinois counterpart, Greitens has a Legislature controlled by his own party. Yet — like Blagojevich — he has few real allies there because of his past treatment of them.

Both governors got into office by bashing the political status quo, deriding the establishment leaders of their own parties. Blagojevich called lawmakers “drunken sailors” over fiscal disagreements; Greitens has referred to Missouri legislators as “third-graders.” Both men dragged legislators back to the Capitol outside their regular schedules.

As a result, neither could rely on fellow party members to provide support — or even necessarily the benefit of the doubt — once prosecutors started announcing charges.

The lack of support Greitens finds among even Republican lawmakers was starkly illustrated recently by state Sen. Rob Schaaf, R-St. Joseph. Schaaf once had his personal cellphone number revealed in an attack ad by an entity tied to Greitens, resulting in a flood of phone calls.

“He’s done,” Schaaf tweeted almost immediately after Greitens’ indictment was announced last month. (It was the completion of his tweet from Jan. 10, when revelations of the affair first broke: “Stick a fork in him.”)

An impeachment effort takes into account who rises afterward. Illinois Democrats who removed Blagojevich on Jan. 29, 2009, handed the governor’s office to Democratic Lt. Gov. Pat Quinn, who they didn’t much like either, but liked better than Blagojevich.

If Missouri GOP lawmakers attempt to remove Greitens, he probably won’t benefit from consternation about his potential replacement: Lt. Gov. Mike Parson was a longtime Republican legislator who personifies the political establishment as much as Greitens has vilified it.

Who is Mike Parson? Meet the man who could replace Greitens

Missouri Gov. Eric Greitens is not the first governor to be indicted while in office. There is a long history of that in American politics. He…

Some parts of Greitens probe could be cloaked in secrecy

The probe, which is not likely to get underway until next week, could lead to the impeachment of Greitens, but it also could result in no acti…

An employee of Eric Greitens emailed a donor list from the Mission Continues charity to two of Greitens’ campaign staffers in early 2015, acco…

FILE - In this Dec. 7, 2011 file photo, former Illinois Gov. Rod Blagojevich, left, speaks to reporters as his wife, Patti, listens at the federal building in Chicago, after Blagojevich was sentenced to 14 years on 18 corruption counts. On Monday, March 28, 2016, the U.S. Supreme Court rejected Blagojevich's appeal of his corruption convictions that included his attempt to sell the vacant Senate seat once occupied by President Barack Obama. (AP Photo/M. Spencer Green, File)

Missouri Gov. Eric Greitens speaks during an interview in his office at the Missouri Capitol Saturday, Jan. 20, 2018, in Jefferson City, Mo. Greitens discussed having an extramarital affair in 2015 before taking office. (AP Photo/Jeff Roberson)