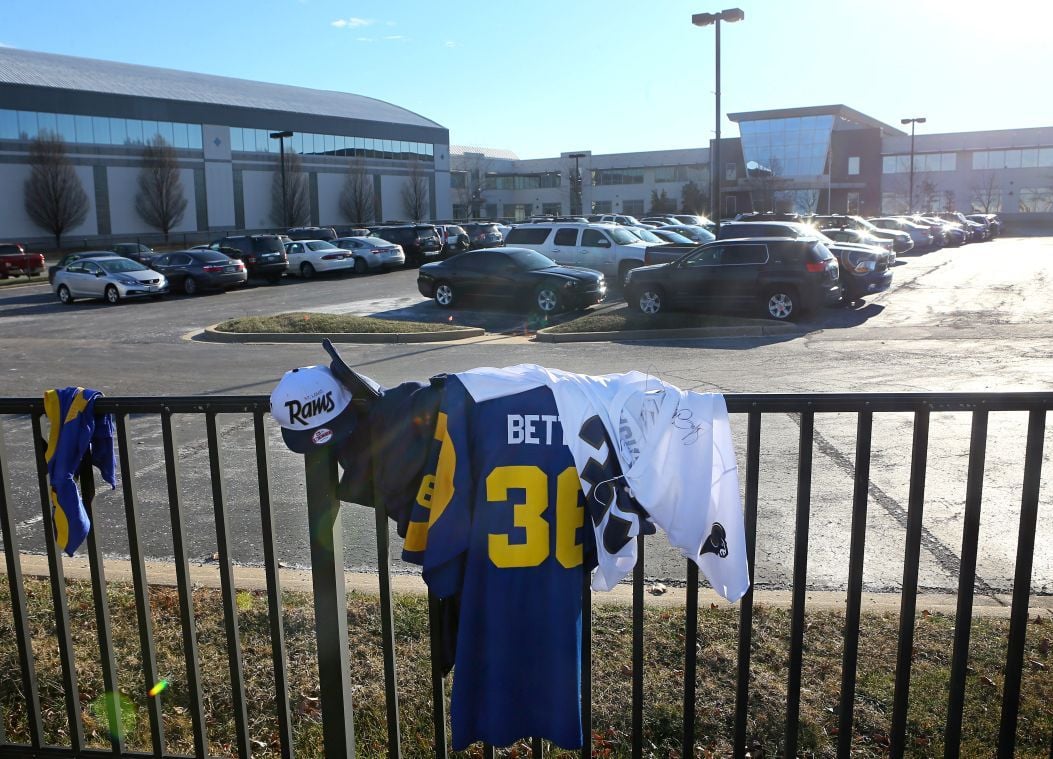 Fans left St. Louis Rams gear hanging on the fence outside the Rams Training Center in Earth City on Wednesday, Jan. 13, 2016. The night before the Rams announced they would be relocating to Los Angeles for the 2016 season and building a new $2 billion-plus NFL stadium in Inglewood, Calif. About an hour after this photo was taken, two men in a van pulled up grabbed all the Rams gear that had been left by fans and drove off. The men said they planned to donate the items to Goodwill. Photo By David Carson, dcarson@post-dispatch.com 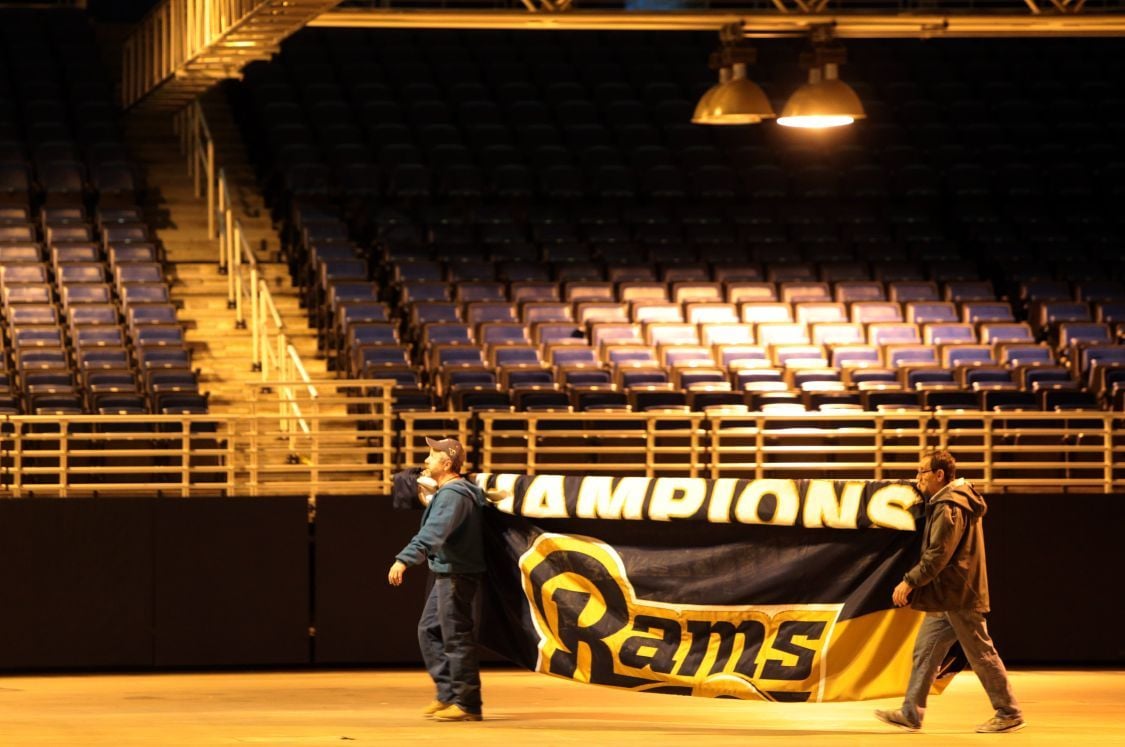 UPDATED at 11 a.m. Friday with quotes from fan and additional details on use of Merchandising Practices Act. PDF of suit also added.

Four fans of the St. Louis Rams have sued the team for moving to Los Angeles, and their lawyer hopes to turn it into a class-action suit representing tens of thousands of people who bought game tickets or team merchandise in the last five years.

It’s against the law to use deception or omit any “material fact” in connection with the sale of merchandise, and the suit seeks to recover actual and punitive damages for those people who bought Rams merchandise between 2000 and 2015.

St. Louis attorney Steven J. Stolze filed the suit for four fans: James Pudlowski, Louis C. Cross III, Gail Henry and her husband, Steve Henry. The plaintiffs could not be reached for comment, but Stolze said the suit is “not about sour grapes. It’s based upon what we believe is a valid claim under the law.”

Stolze said the suit seeks a refund of money fans spent on the Rams since 2010 when Stan Kroenke became the team’s majority owner.

A lawyer for the Rams also did not immediately respond to a request for comment.

The fans in the suit spent money on Rams tickets and merchandise over the years, amid public assurances from Kroenke and other team officials that the Rams were going to stay in St. Louis, the suit says.

Stolze said Rams officials misled fans by indicating they wouldn’t “lead the charge” out of St. Louis, were working to build a winning team in St. Louis and would try everything they could to keep the team in town.

The court filing lists quote after quote from Kroenke or Kevin Demoff, a top executive, that gave fans assurances the team would stay.

“I’m going to attempt to do everything I can to keep the Rams in St. Louis,” Kroenke told then-Post-Dispatch columnist Bernie Miklasz in 2010.

“People know I am an honorable guy,” Kroenke told Miklasz at the time. “I’ll do my damnedest” to keep the Rams in St. Louis, he added.

“It’s not our desire to ever lead the charge out of St. Louis,” Kroenke told the Post-Dispatch later in 2010.

In a radio interview in 2012, Demoff said, “Our entire focus is on building a winner in and for St. Louis,” the suit says.

As attendance declined and the Rams record was dismal, Demoff’s cheerleading continued, the suit said. “Our goal is to build a winner in St. Louis not only in 2012, but in 2022, 2032 and beyond,” Demoff said on the team website in 2012, the suit says.

After Kroenke bought property in Inglewood, Calif., where he now intends to build a new stadium, Demoff told a St. Louis radio station he expected the Rams’ future “will be right here in St. Louis.”

“Defendants never informed their customers of their intent to move the team to Inglewood during the applicable time period,” the suit says. “Their first public acknowledgement of this fact was on Jan. 4, 2016, when defendants filed the application to relocate the St. Louis Rams to Inglewood.”

The suit doesn’t say how much money the fans lost or are seeking in the suit.

The law doesn't define "unfair practice," he said, so courts are left to determine that on a case-by-case basis.

Cases have involved disputes over cars, repairs to homes, for-profit colleges, and even health care services. Recently, a Missouri Supreme Court case expanded the act to include lending institutions, Noland said. "It's a broad law that has been kind of evolving over the years," he said.

Asked his opinion about the case filed by Rams fans, Noland said, "As a lawyer, it's an interesting theory that ultimately might be up to the court."

Some fans who read about Stolze's lawsuit this week say they were contacting Stolze to see if they could be included. One such fan is Bill McMahon, 67, of the Harvester area in St. Charles County. The office in his rec room is packed with Rams merchandise from hats to plaques that mark the 20 years he watched them play in St. Louis.

McMahon, a sales representative for the company that sold seats to the Dome, said he was a charter PSL member with four seats in the loge area. He spent thousands on tickets. In addition, he paid $30 a game to have a permanent tailgating spot. Now with the team's departure, McMahon hopes the class-action status becomes reality.

"I want to recover the money I spent, and I can't stand the fact we got lied to by Kroenke and Demoff," he said.

Lawsuit demands the right to buy tickets in L.A.

Pudlowski vs. The St. Louis Rams

Four Rams fans filed suit against the St. Louis Rams after the football team announced it was leaving St. Louis.

Gordo’s Zone: Moving on from the NFL

Fans left St. Louis Rams gear hanging on the fence outside the Rams Training Center in Earth City on Wednesday, Jan. 13, 2016. The night before the Rams announced they would be relocating to Los Angeles for the 2016 season and building a new $2 billion-plus NFL stadium in Inglewood, Calif. About an hour after this photo was taken, two men in a van pulled up grabbed all the Rams gear that had been left by fans and drove off. The men said they planned to donate the items to Goodwill. Photo By David Carson, dcarson@post-dispatch.com