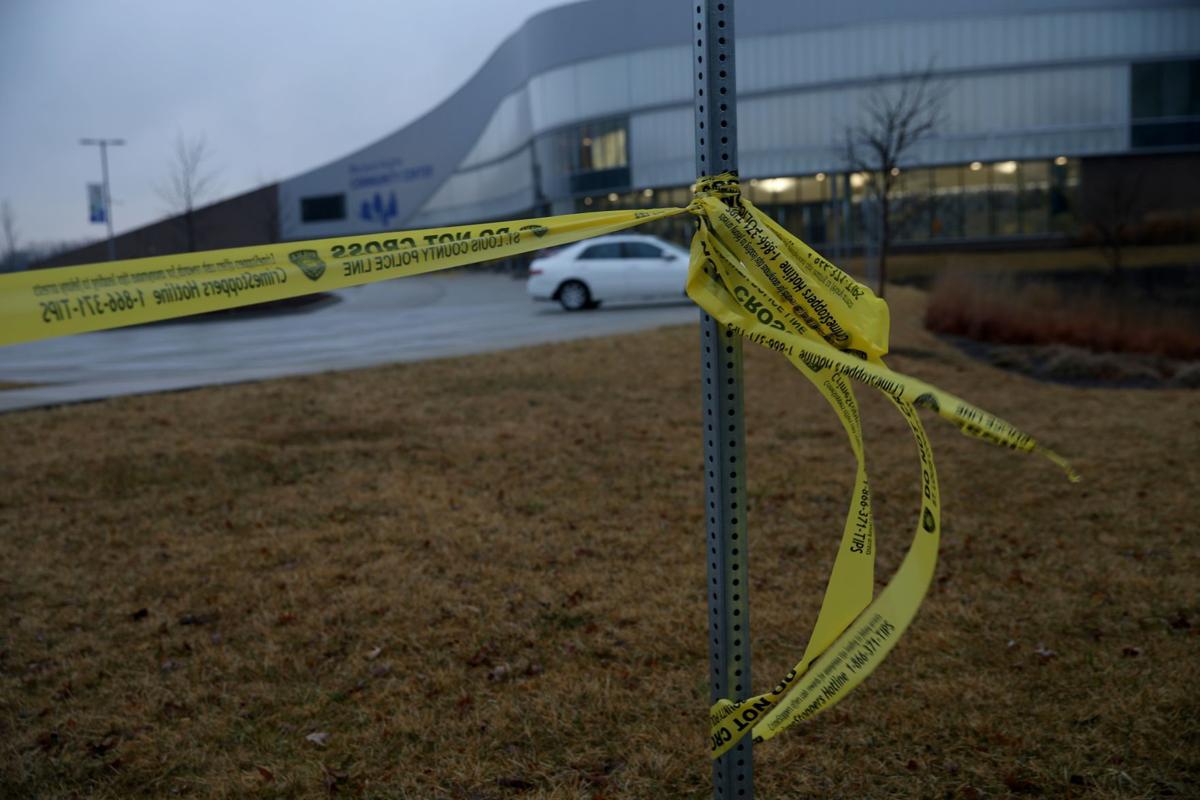 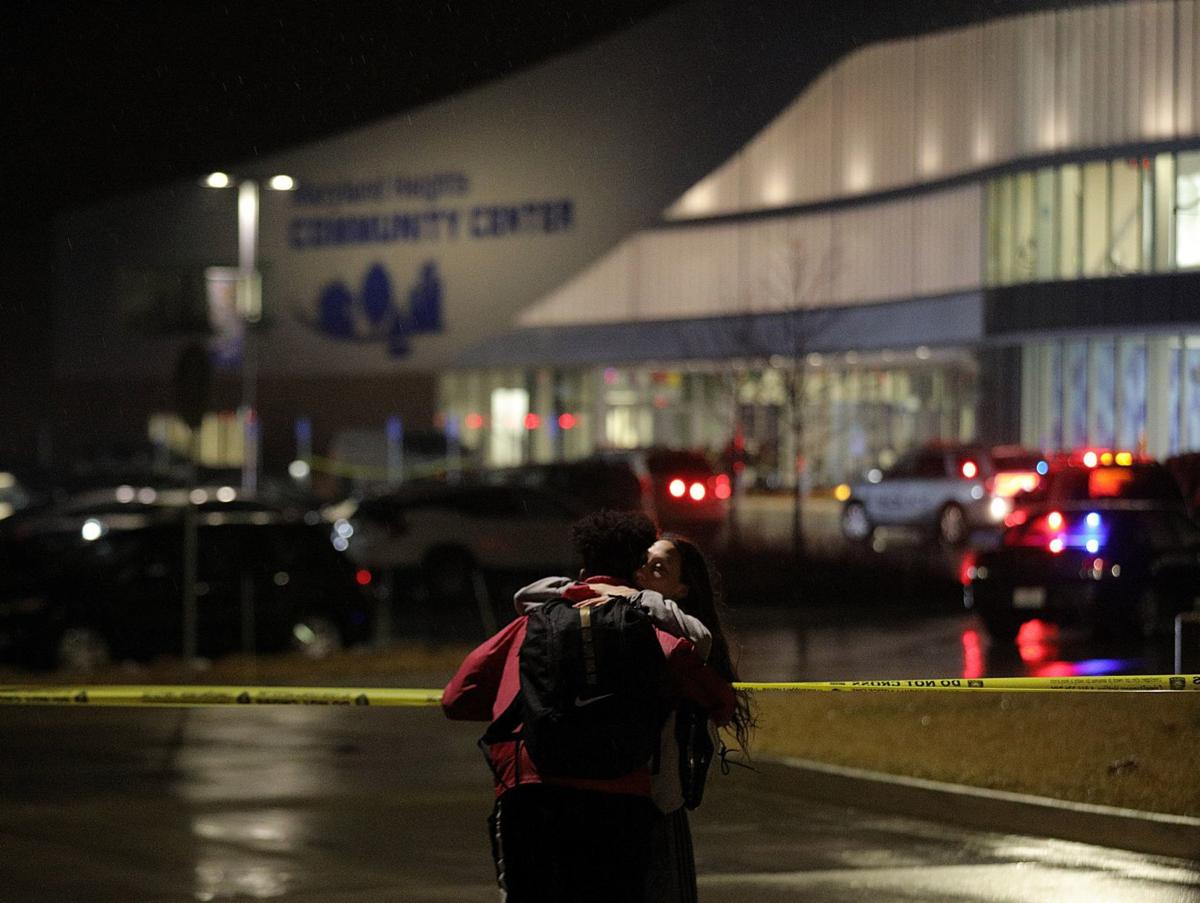 Jaylen Greenlee embraces his friend Becca Johnson outside the Maryland Heights Community Center on Monday, Feb. 24, 2020, after a gunman entered the complex and fired shots, killing at least one. Greenlee and Johnson were both inside at the time and had just been released. Photo by Christian Gooden, cgooden@post-dispatch.com 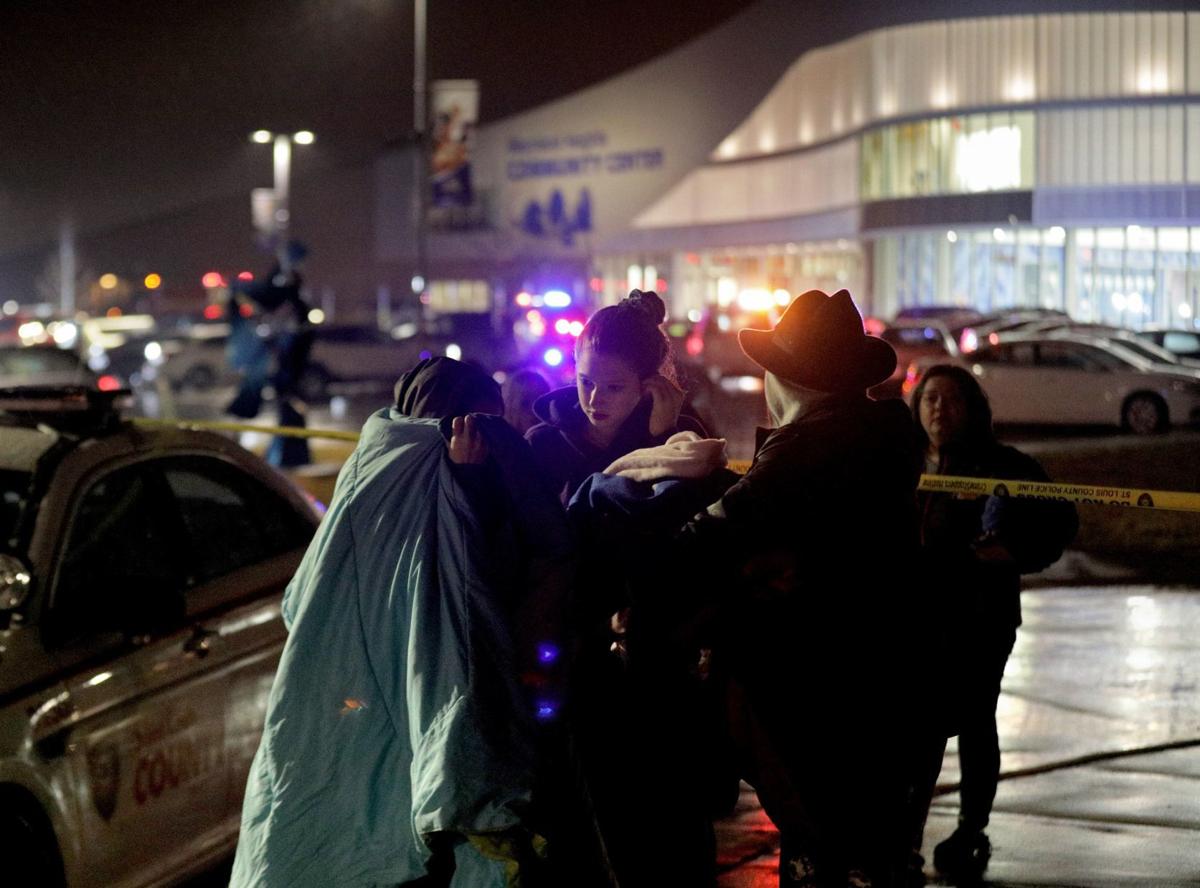 People just released from the Maryland Heights Community Center reunite with family members on Monday, Feb. 24, 2020, after being trapped inside when a gunman entered the complex and fired shots, killing at least one. Photo by Christian Gooden, cgooden@post-dispatch.com 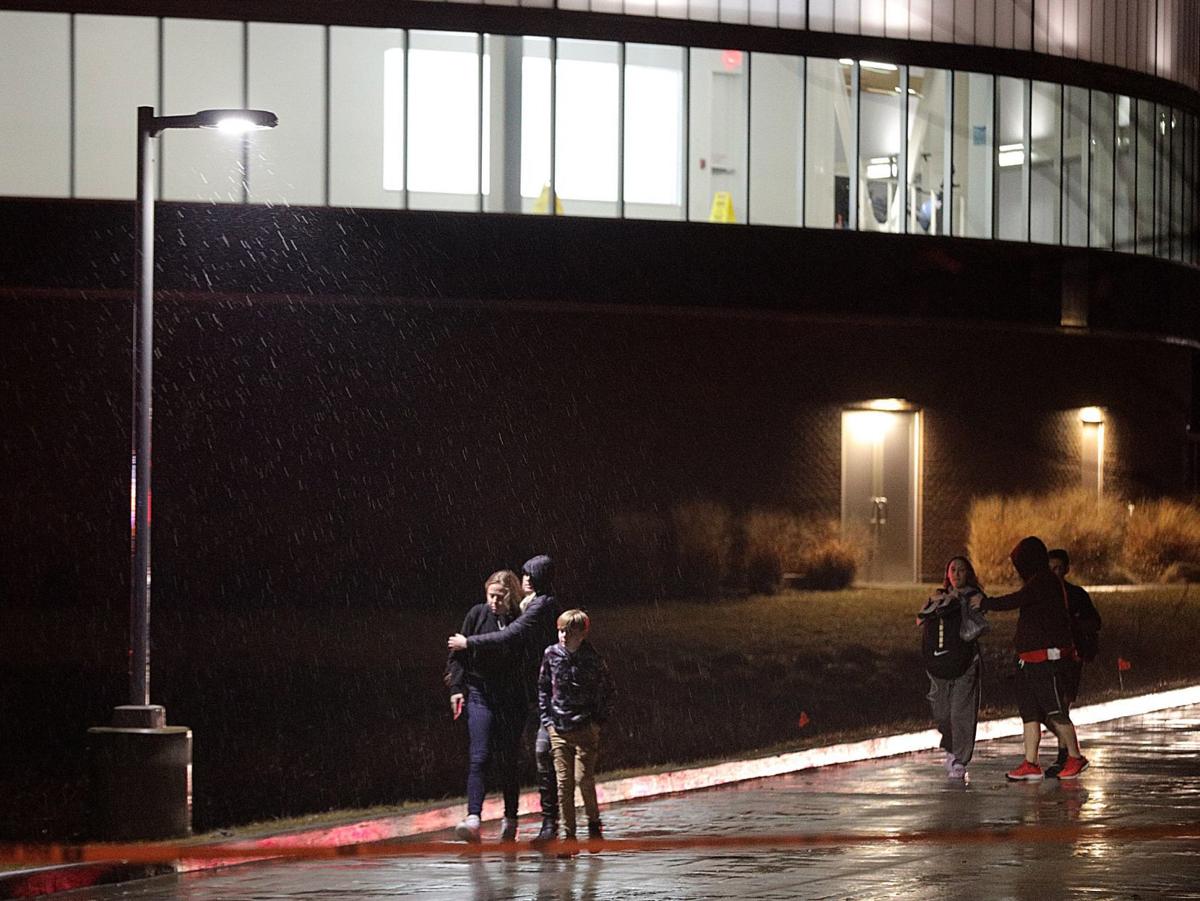 A group of people are released from the Maryland Heights Community Center on Monday, Feb. 24, 2020, after being trapped inside when a gunman entered the complex and fired shots, killing at least one. Photo by Christian Gooden, cgooden@post-dispatch.com 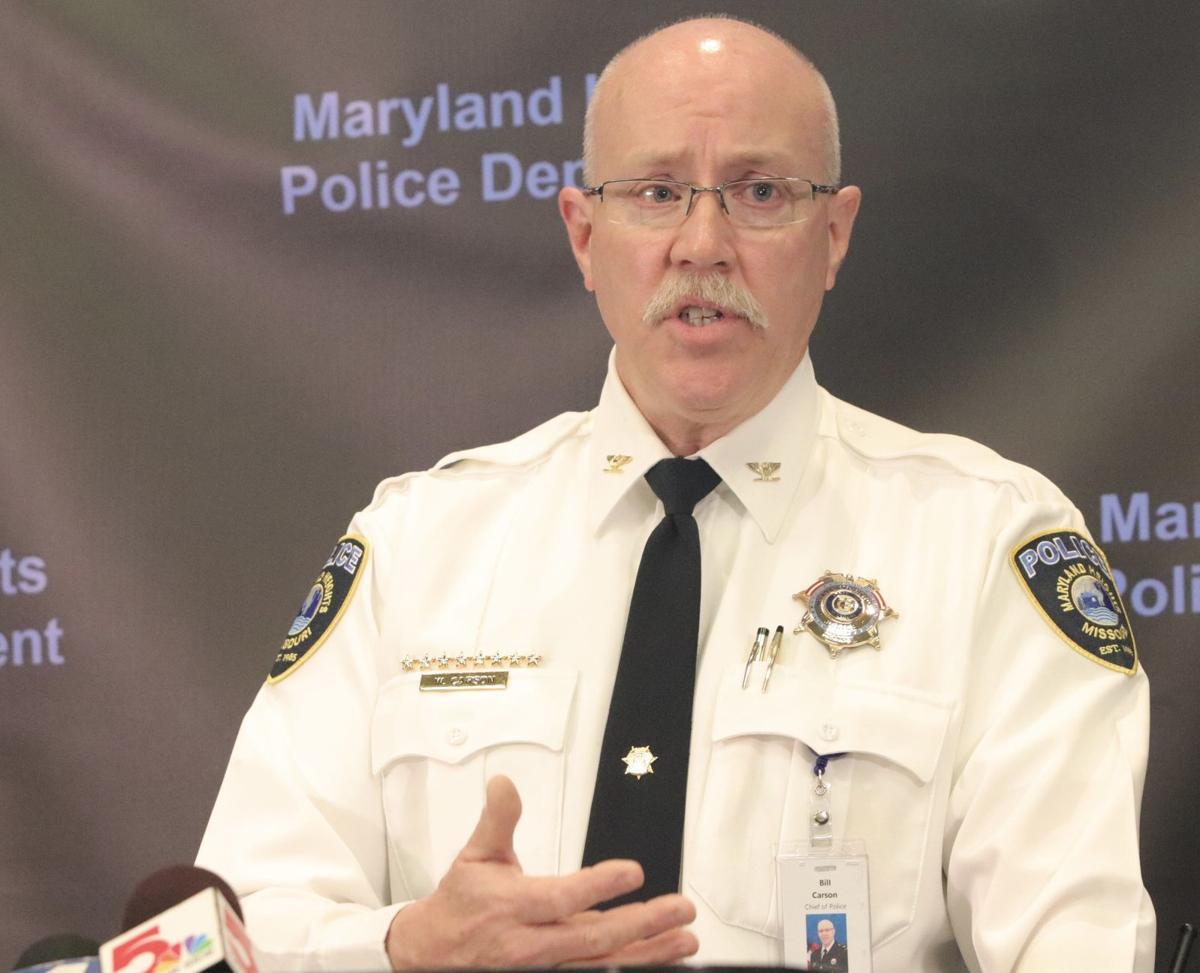 MARYLAND HEIGHTS — Panic swept through the Maryland Heights Community Center as more than 150 people, many of them children, sought places to hide when a part-time janitor fatally shot a co-worker and then was wounded by a police officer who confronted him in the lobby of the sprawling fitness complex, according to police and witnesses.

The chaos that unfolded was described Tuesday by Maryland Heights police Chief Bill Carson and people who were at the center when gunfire rang out.

The gunman became angry when he was told to leave work, Carson said. He approached the on-duty supervisor, Maria Lucas, about 8 p.m. Monday at the horseshoe-shaped front desk in the lobby and shot the 45-year-old Olivette resident in the head.

He was identified Tuesday by Maryland Heights police as 30-year-old Michael J. Honkomp.

A Maryland Heights police officer in the center’s parking lot was tipped off to the shooting, ran into the building and shot Honkomp during a brief gun battle, leaving Honkomp with multiple gunshot wounds, Carson said. The officer was not injured, nor were any of the many people who fled to closets, workout rooms and nearby homes and businesses.

“I think the fact that the officer got into the building as quickly as he did very well could have prevented further tragedy,” Carson said during a news conference.

Honkomp, of the 200 block of St. Daniel Lane in Florissant, was charged Tuesday with first-degree murder, first-degree assault on a special victim, resisting arrest and armed criminal action. He was hospitalized with serious injuries. A judge said no bond will be allowed once he is jailed.

Honkomp does not have an attorney listed in court files. No one answered at his home Tuesday. A review of court records shows he has no criminal history in Missouri.

Carson did not specify why Honkomp was asked to leave work Monday, but a law enforcement source told the Post-Dispatch that he had made inappropriate remarks over a city public works radio. Lucas had overheard the remarks and told Honkomp he shouldn’t talk in that manner, according to the source, who asked not to be identified because the person is not authorized to discuss an ongoing investigation.

A witness to the shooting, Maya Furr, 20, a lifeguard at the complex, said she saw Lucas and the shooter speaking in the lobby before the man pulled out a gun and shot her.

There were about 20 people nearby at the time and some ran to hide under counters, Furr said, adding that she fled the building and hid with a group of people in a nearby home.

Honkomp did not attempt to leave and began pacing in the front entry while holding the weapon, Carson said.

Sasha Kondratyeva was exercising on a treadmill on the second floor of the center when she heard a loud bang and went to see what happened. She thought maybe the large plane suspended in the lobby had fallen, but instead saw the shooter frantically pacing with the gun in his hand.

“I thought he was there to protect us at first because he was wearing a blue shirt like the employees,” Kondratyeva said.

She took a short video on her phone of the gunman before staff told her to find cover and she heard a series of loud shots when the officer arrived, she said.

Everyone on the second floor then ran and Kondratyeva got into a utility closet with about 20 people. Many quietly called their families to tell them they loved them. Some sobbed. Parents who were separated from their children in the facility’s child care center worried about their kids. Some men in the closet picked up small weights they planned to hit the shooter with if he tried to enter, Kondratyeva said.

“I thought this could be it for me,” she said.

The officer was on duty and in uniform at the time of the shooting. He had been filing a report in a police substation at the community center and had just left the building on McKelvey Road when a woman found him in the parking lot and told him someone had been shot.

The officer hurried inside the complex’s first set of glass doors and the gunman immediately fired at him several times through the glass of a second set of doors, Carson said.

More than a dozen rounds were fired between the two men, and the officer shot Honkomp multiple times, Carson said. Honkomp was taken to a hospital with serious injuries.

“I think the officer reacted with incredible courage and bravery,” Carson said, adding that instead of retreating, the police officer ran into the danger. “During the gun battle the officer was there all by himself and he stayed with the suspect.”

The exchange of gunfire probably lasted “a matter of seconds” but likely felt like an eternity, Carson said.

Maryland Heights Mayor Mike Moeller in a statement Tuesday said the officer “showed selfless bravery and put the public’s safety above his own.”

The officer has been out of the police academy for 14 months but acted like a veteran, Carson said. The chief would not identify the officer but a probable-cause statement and review of Maryland Heights public employees reveal he is Larry Jerrod.

During the shooting, many of the community center’s staff helped protect people by finding them hiding places and, in some cases, getting children out of the building. The center was busy with events including volleyball, pickleball, karate classes and a swimming pool full of families.

The woman killed, Lucas, was an employee of the Parks and Recreation Department for seven years and had started as a camp counselor. She was well known in the community because she was a senior staff member at the center and often sat at the front desk, Carson said.

Lucas’ neighbors said she lived with her father, who has been ill for many years, and had cared for her mother who died of cancer last year.

“It’s devastating,” neighbor Sandy Morgan said of her friend’s death. “It’s been such a sad time for the family.”

Another neighbor, Leroy Love, said Lucas used to work as an aide in the Special School District of St. Louis County with Love’s wife. “She was a hard worker, a good person,” he said.

Maryland Heights City Councilwoman Susan Taylor said Tuesday she met Lucas by accident when Lucas helped her find an item at a Walgreens store, and they formed a fast connection.

She was “a smiling person. Sweet and funny,” Taylor said. “I’m sure she will be missed by so many people.”

Lucas’ family members said they were still in shock Tuesday and were too distraught to talk about the death.

Honkomp was hired as a maintenance aide at the community center in May 2017, according to city employment records.

He also worked in logistics at a Target store and had previous jobs as a custodian at the Ameristar Casino in St. Charles and an usher at Regal Cinemas, according to his Linkedin page.

He used a 9 mm semiautomatic handgun in the shooting, Carson said, explaining that the city has a policy against bringing a gun into the workplace.

Carson said he was not aware of any previous criminal charges against Honkomp.

The city issued a statement saying the community center will be closed until further notice.

The shooting was captured on video, including by a body camera worn by Jerrod and several security cameras in the building, Carson said.

Investigators are reviewing the footage and will eventually do a review of the police and staff response, he said.

“We will be looking for lessons learned,” he said. “You want to know, were there red flags? Were there indicators that something like this could possibly occur?“

Video: Police give more info on shooting in Maryland Heights

Jaylen Greenlee embraces his friend Becca Johnson outside the Maryland Heights Community Center on Monday, Feb. 24, 2020, after a gunman entered the complex and fired shots, killing at least one. Greenlee and Johnson were both inside at the time and had just been released. Photo by Christian Gooden, cgooden@post-dispatch.com

People just released from the Maryland Heights Community Center reunite with family members on Monday, Feb. 24, 2020, after being trapped inside when a gunman entered the complex and fired shots, killing at least one. Photo by Christian Gooden, cgooden@post-dispatch.com 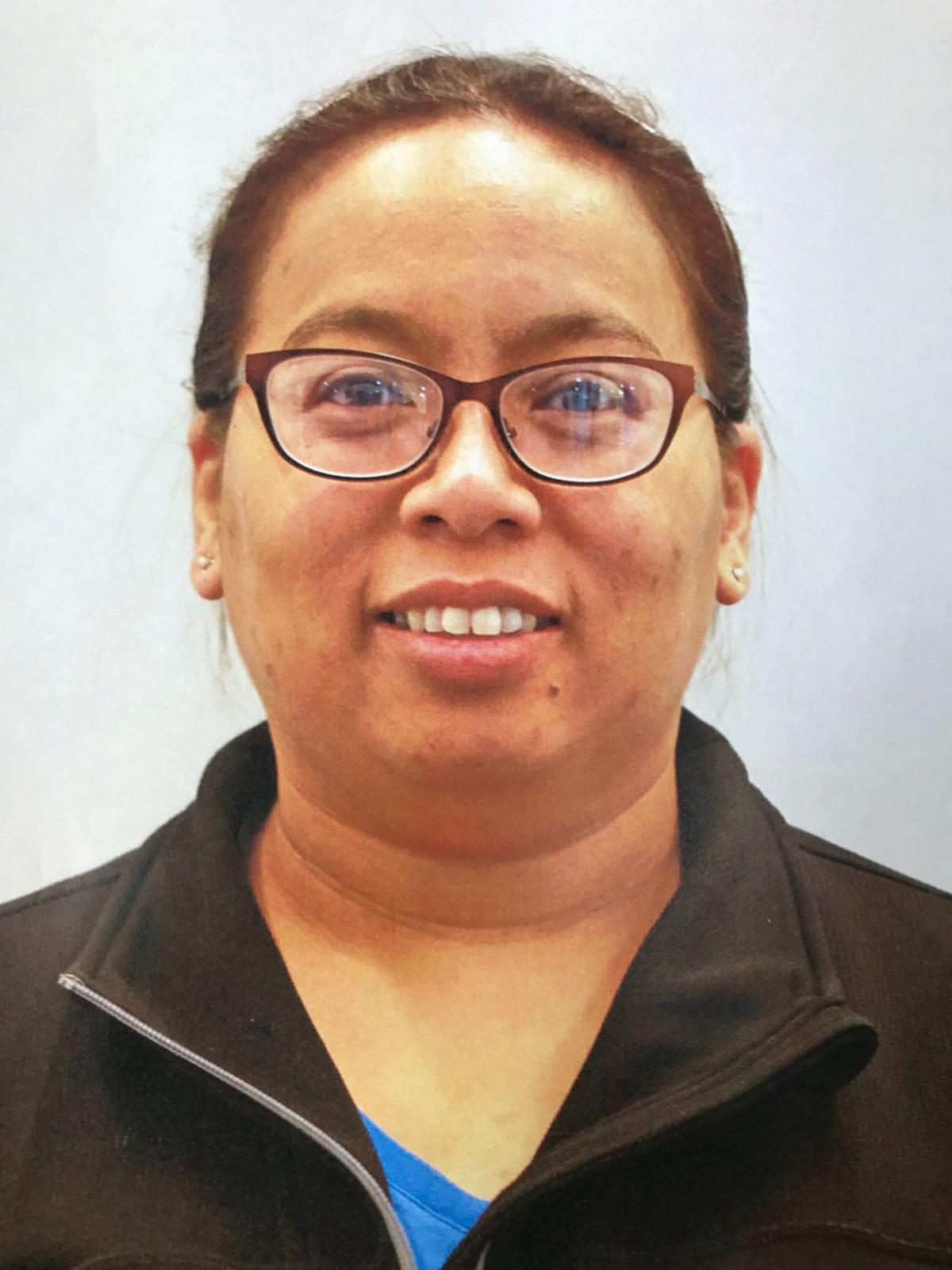 Maria Lucas, 45, of Olivette, was killed by a co-worker at the Maryland Heights Community Center on Feb. 24, 2020.

A group of people are released from the Maryland Heights Community Center on Monday, Feb. 24, 2020, after being trapped inside when a gunman entered the complex and fired shots, killing at least one. Photo by Christian Gooden, cgooden@post-dispatch.com 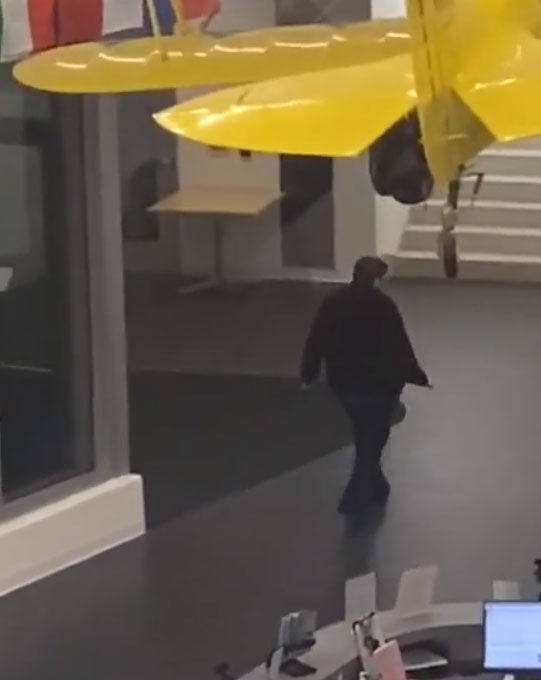 A gunman paces inside the Maryland Heights community center after killing a woman Monday, Feb. 24, 2020. Photo is from a video courtesy of Sasha Kondratyeva. 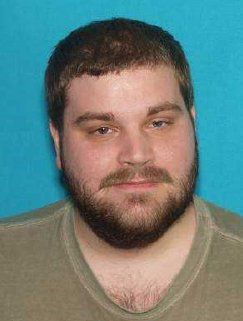