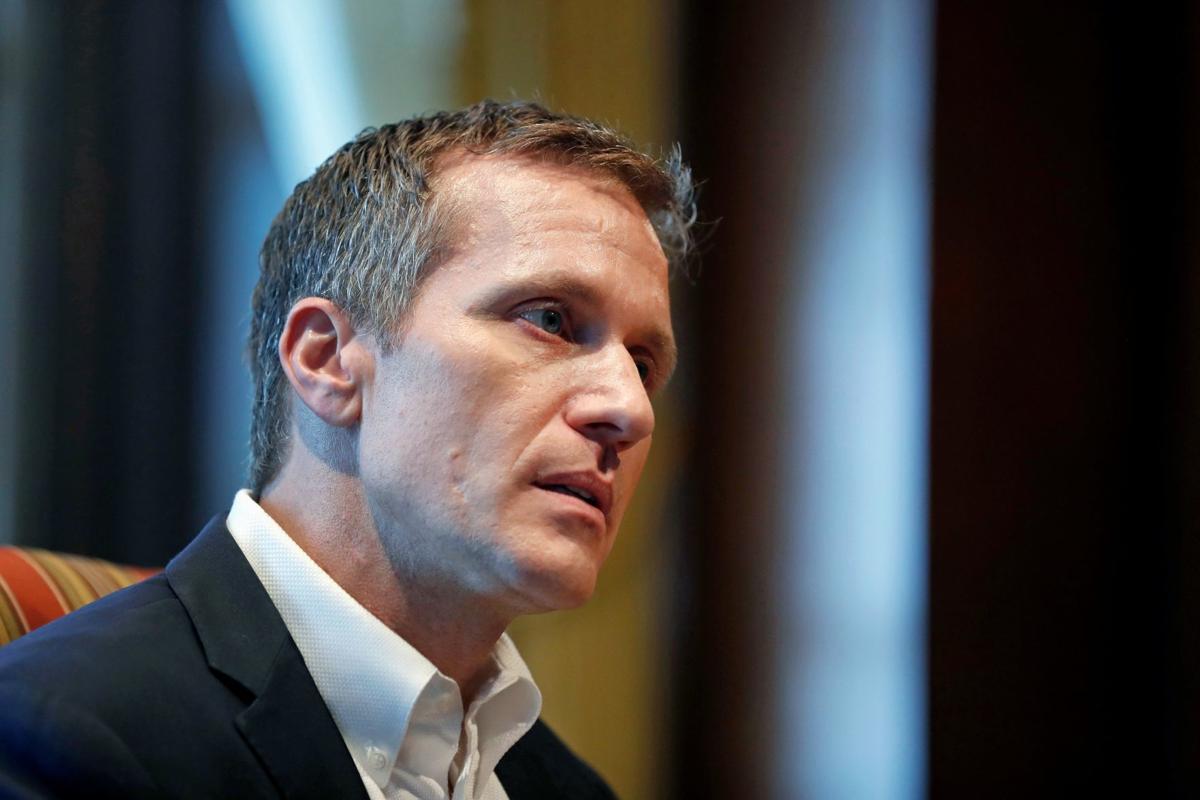 FILE - In this Jan. 20, 2018, file photo, Missouri Gov. Eric Greitens listens to a question during an interview in his office at the Missouri Capitol in Jefferson City, Mo., where he discussed having an extramarital affair in 2015 before taking office. His political future faces a big test Wednesday, April 11 when a special legislative committee issues an investigative report related to the affair. (AP Photo/Jeff Roberson, File) 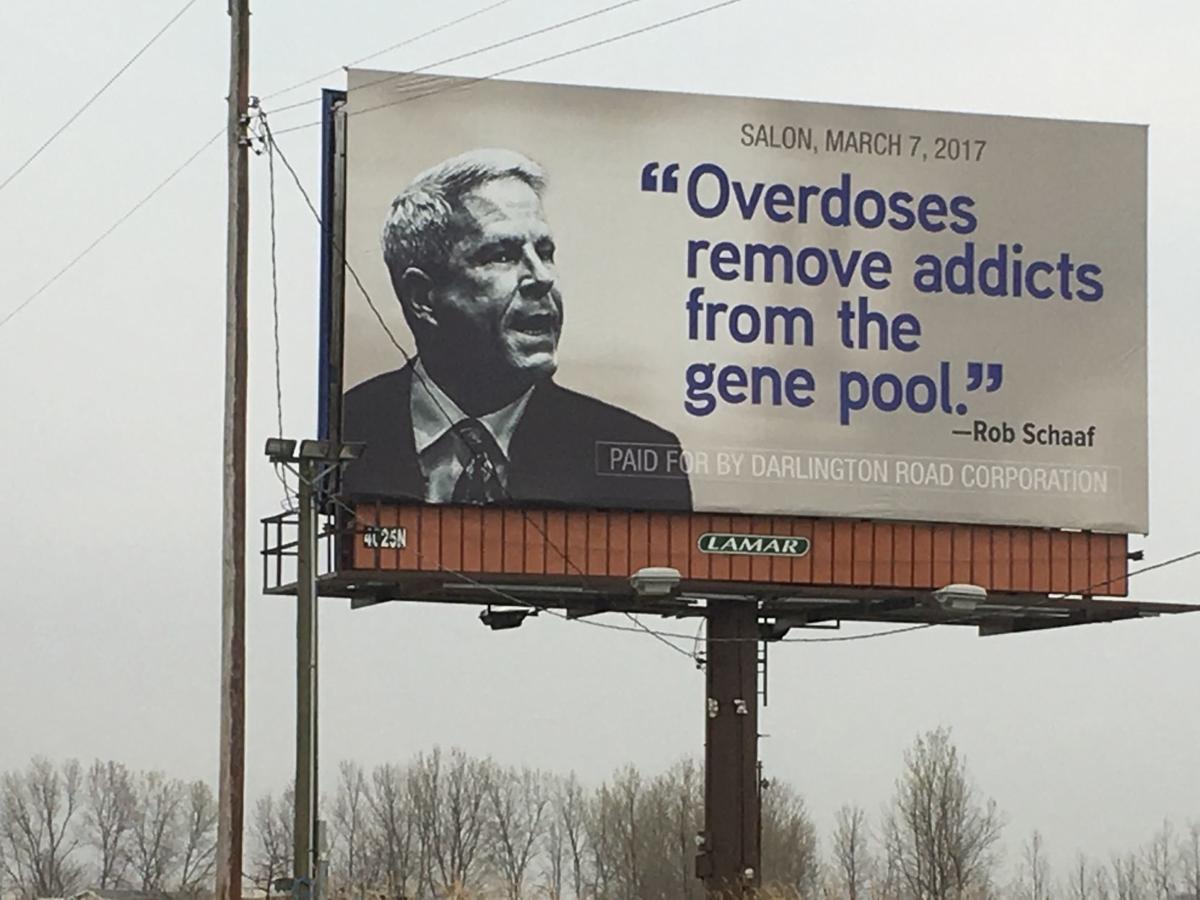 JEFFERSON CITY • Gov. Eric Greitens, bodyguards in tow, made a rare appearance on the fourth floor of the Missouri Capitol on Wednesday as he met with some of the Republican lawmakers who hold his fate in their hands.

Reporters waited outside a fourth floor office and followed Greitens, a Republican, down a stairwell as he headed back to his second-floor office suite. They asked whether he still used a cellphone app that deletes text messages, took a donor list from his charity without its permission, shot a compromising photo of his lover and if he planned to resign.

“Why won’t you answer our questions?” a Post-Dispatch reporter asked.

Greitens has refused to resign, even as he battles two felony cases — one alleging invasion of privacy in connection with an affair, the other charging him with computer tampering for taking a charity donor list. The capital city is bracing for potential impeachment proceedings — a possibility that would carry guaranteed fallout, if not all-out political warfare.

Greitens’ adversaries in the GOP-controlled Legislature are debating whether and how to dislodge him from office. Leaders have even talked of attempting to use an obscure provision in the state Constitution that allows creation of a “disability board” to decide whether the governor is unable to fulfill his duties.

Rep. Randy Pietzman, R-Troy, said the governor dropped by Wednesday to talk about building an overpass in his district.

“Naturally, I asked him a few questions,” Pietzman said. “Some of them he talked about. Some of them he didn’t. Till the trial comes up, he’s not at liberty to say.

“He said he was going to make some rounds today and talk to a few reps, which is good. He needs to get out. He seemed confident.”

In a way, Greitens’ refusing to resign is not surprising. The Democrat-turned-Republican, who has long criticized establishment politics, has never adhered to political norms.

Under one scenario circulating among legislative leaders, if Greitens is impeached by the House, he could be suspended from his duties by the special board, which would declare him unable to carry out the duties of his office.

The so-called disability board would comprise the top two leaders in the House and Senate and all of the statewide officers except for Greitens.

If a majority of the board determines that Greitens “is unable to discharge the powers and duties of his office,” Article 4 of the Missouri Constitution says, he would be suspended from exercising the duties of his office, but he would still be paid and could live in the governor’s mansion until his case in the Senate is resolved. If Greitens objects, the case would be decided by the Supreme Court, according to the Constitution.

A member of House leadership who spoke on the condition of anonymity confirmed that the provision in the Constitution had been discussed. “A lot of people have asked,” the person said.

Lt. Gov. Mike Parson, a former state senator from Bolivar and a Republican, would step in as governor if Greitens were suspended.

Attorney Ross Garber, an impeachment expert who has been retained by the governor’s office, said that scenario was “completely inapplicable” because Greitens was still able to perform his duties.

“There is no argument that the governor is disabled,” Garber said. “An official who is impeached would continue to serve in office.”

She said the governor should not have the power to pressure lawmakers on the impeachment process by threatening to not sign their bills.

The legislative leaders do not have to send the governor any bills to sign until a May 30 deadline.

“He can’t sign ’em unless I sign ’em,” Richard said. “If the minority leader decides that’s in the best interest of the Senate, we will just leave that for another day.”

The advertisements state that the Darlington Road Corp. purchased them. Nevada records list Las Vegas lawyer Robert P. Spretnak as the president, secretary, treasurer and director of the corporation.

A woman who answered the phone at Spretnak’s office said he was out of the country and unreachable. Twenty-year-old news clippings connect Spretnak to the Las Vegas Sands Corp., run by casino mogul and GOP mega-donor Sheldon Adelson.

Politico reported in February that Greitens sought help in Las Vegas from Adelson as his legal troubles began to mount.

Andy Abboud, spokesman for Adelson, said “no” when asked if Adelson was behind the billboards.

“Absolutely no affiliation whatsoever,” he said in a text message when asked about Spretnak. “Have not heard that name in years.”

It is unclear whether the billboards relate to Schaaf’s opposition to dark money, his opposition to the governor, or both. He is term-limited and not running for any other office.

Schaaf said anyone who thought billboards would intimidate him was “stupid.” More likely, he said, is that the billboards are meant to intimidate other Republicans.

“Don’t be intimidated,” Schaaf said on the Senate floor.

Greitens has called St. Louis Circuit Attorney Kim Gardner a George Soros-backed “liberal prosecutor,” claimed that Attorney General Josh Hawley, a fellow Republican running for the U.S. Senate, was “better at press conferences than the law” and called a House committee investigating him a “witch hunt.”

Greitens recently spent $50,000 on a radio ad buy and has roughly $2.5 million sitting in his campaign coffers. Greitens also has a Jekyll-and-Hyde history, maintaining a smiling persona in public and menacing people in private.

During the 2016 primary campaign, one of Greitens’ GOP rivals, John Brunner, recorded Greitens without his knowledge.

“Oh, John Brunner, oh my God, you are such a weasel! Are you going to meet tomorrow or not?” Greitens said then.

GOP senators also said Greitens attempted to intimidate them during private meetings last year. Sen. Jamilah Nasheed, D-St. Louis, called last week or increased security after a House report contained accusations of violence by Greitens and his past use of “violent rhetoric, verbal threats and reliance on firearms and explosives in his commercials.”

Rep. Phil Christofanelli, R-St. Peters, said he had no knowledge of the governor’s or his allies’ making threats against lawmakers. He did say they felt pressure on multiple fronts: from constituents who are “uncertain” about the allegations; from House leaders who want support as a special committee forges ahead with its investigation; and from Democrats, many of whom want immediate impeachment proceedings.

“Those are the three forces that are affecting many, many members of the Legislature,” said Christofanelli, who hasn’t called for Greitens to resign.

Rep. Bill White, R-Joplin, who is running for a state Senate seat, said the majority of his Republican constituents still supported Greitens.

“They use the word ‘witch hunt’ a lot,” White said Wednesday. “I think (impeachment) is premature.”

Sky Chadde of the Post-Dispatch contributed to this report.

"There is a strong, silent majority of people throughout the state" who support police even in controversial circumstances, the Republican gov…

FILE - In this Jan. 20, 2018, file photo, Missouri Gov. Eric Greitens listens to a question during an interview in his office at the Missouri Capitol in Jefferson City, Mo., where he discussed having an extramarital affair in 2015 before taking office. His political future faces a big test Wednesday, April 11 when a special legislative committee issues an investigative report related to the affair. (AP Photo/Jeff Roberson, File)