ST. LOUIS • A former employee of a school district in Jefferson County admitted in federal court Friday that she had embezzled $1.6 million from her employer over a decade.

Huskey began working for the district in 1996, became an administrative assistant in 2002 and the business manager in 2009, he said.

Huskey is also a former board secretary and treasurer.

During a Dec. 21 special meeting, the school board voted unanimously to reject Huskey’s resignation and terminate her employment and terminate her from the board, meeting minutes show. She initially was placed on paid administrative leave; that later was changed to unpaid leave while an audit was conducted, board records show.

Superintendent Matt Zoph posted a note on the district’s website Friday stating that the district hired an outside audit firm after it became aware of possible irregularities. It then gave the audit results to the FBI and U.S. Attorney’s office and “fully cooperated” during their investigation and prosecution.

“The District remains committed to ensuring Mrs. Huskey is held accountable for her actions and that it is fully compensated for this substantial loss,” the statement said. 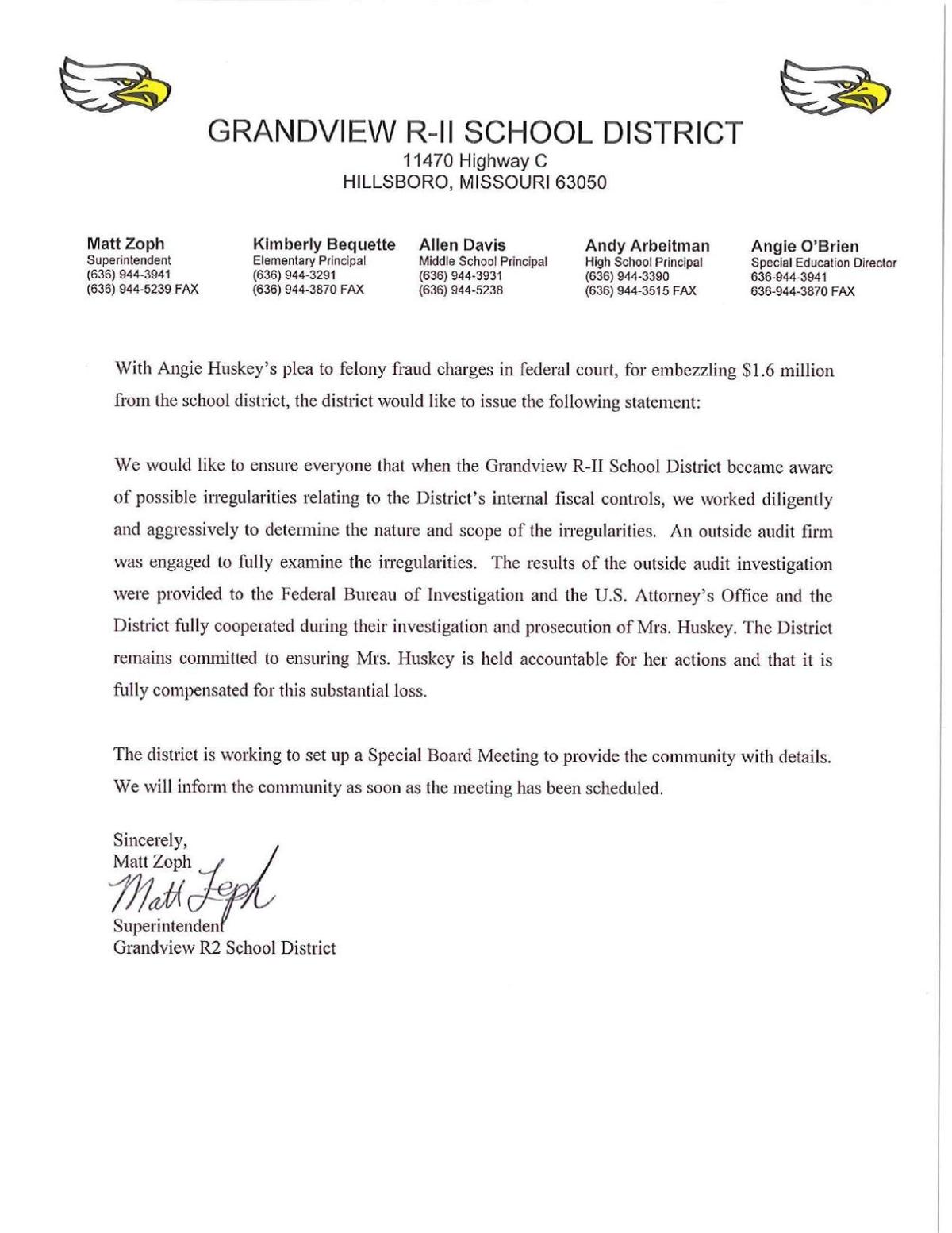 Huskey embezzled the money by making payments to herself and using district money to pay for personal purchases. She covered it up by altering accounting records to falsely show that the payment went to a legitimate vendor, or changing payroll records for other employees to falsely show higher pay, Finneran said.

He said that because of Huskey, 18 employees had to pay $13,368.28 in extra taxes for salary that they never actually received.

Huskey waived indictment by a grand jury and pleaded guilty Friday to a felony fraud charge.

At a March 16 board meeting, Zoph said that expenses were higher this year due to one-time expenses of $84,673 in “lawyer fees and special audit” and $90,300 “coming from fiscal irregularities,” board meeting minutes say.

In an email after the hearing, defense lawyer Talmage Newton wrote: “Mrs. Huskey deeply regrets her actions and takes full responsibility. She does not make excuses for her conduct and fully understands the impact this has and will have on the school district, her coworkers, and most importantly the students. She is remorseful and contrite. She prays that those affected by her misconduct can find it in their hearts to forgive her.”

At her Oct. 13 sentencing, Huskey faces roughly four to five years in prison under recommended federal sentencing guidelines. She will also be ordered to repay the money.

Huskey has agreed to forfeit nearly $200,000 in various accounts and a two bedroom condo at Table Rock Lake, or the condo’s sales proceeds.

The school district said it will schedule a special board meeting to provide the community with details about the situation.

Eleven-year-old Zaelynn Wiseman was upset that he had been grounded and said he was going to Cape Girardeau to see his father, his mother explained.

Zaelynn Wiseman was attempting to walk across the southbound lanes of I-270 near Page Avenue on Tuesday when he was struck.

Florissant woman accused of giving meth to girl, 13, and sodomozing her

Police said the shooting stemmed from an argument between Wright and the suspects at a liquor store.

New charges against a former Kirkwood High School teacher bring to three students he's accused of raping or sexually assaulting in the 1990s.

About 60 firefighters were battling the blaze Friday at the warehouse owned by developer Paul McKee's NorthSide Regeneration.

Sarah A. Delashmit pleaded guilty Tuesday in U.S District Court to four felony counts of wire fraud and one count of mail fraud.

A judge will soon determine if James Timothy Norman will be released while waiting for trial.

Except for four months in 1992, Democrats have held a lock on the Circuit Attorney's Office for more than 90 years.