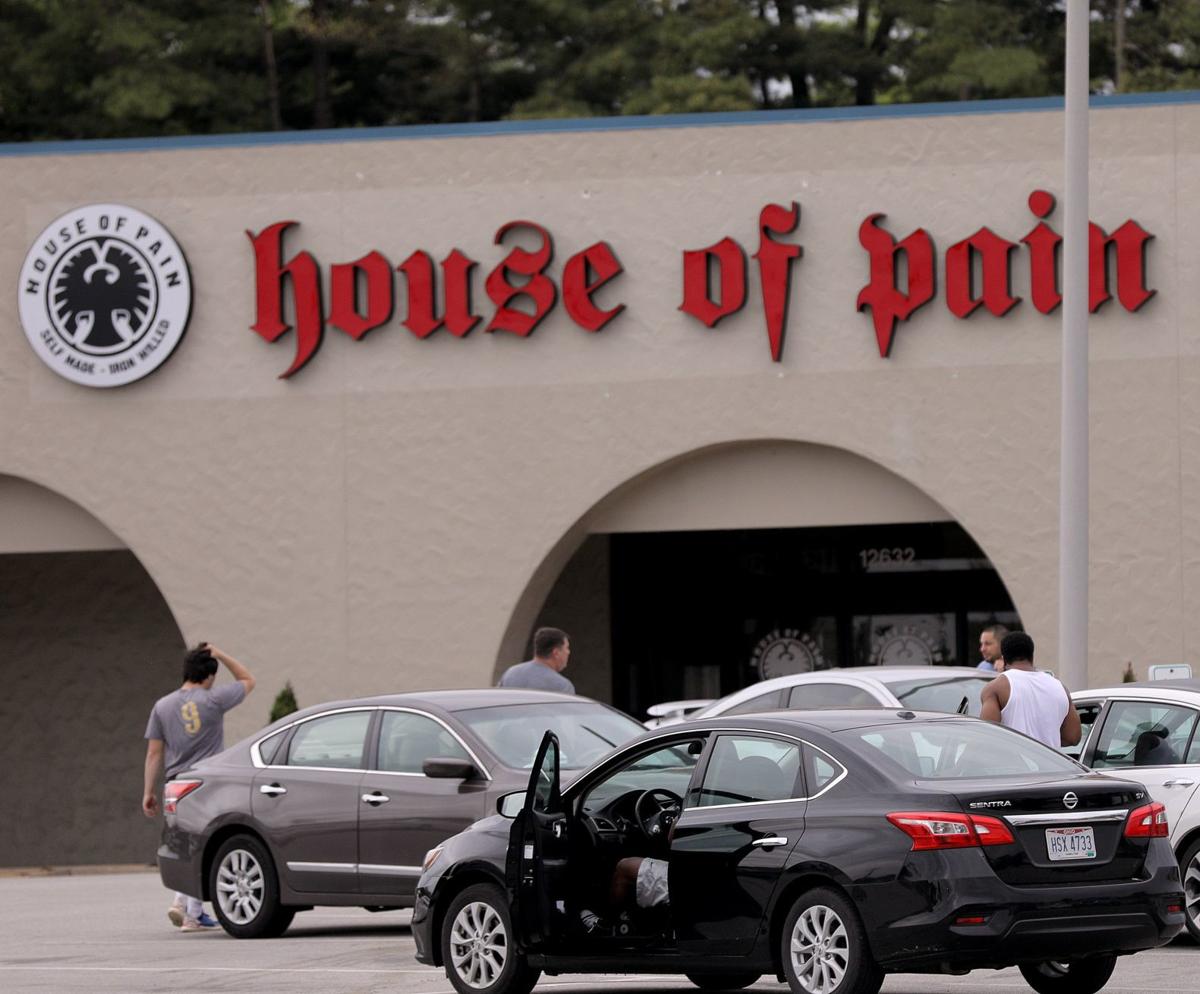 Patrons of House of Pain gym in Maryland Heights pause in the parking lot on Friday, May 22, 2020, after being forced to abandon their workouts moments after a judge ruled against the owner and ordered it to close under a St. Louis County health order. (Christian Gooden, cgooden@post-dispatch.com) 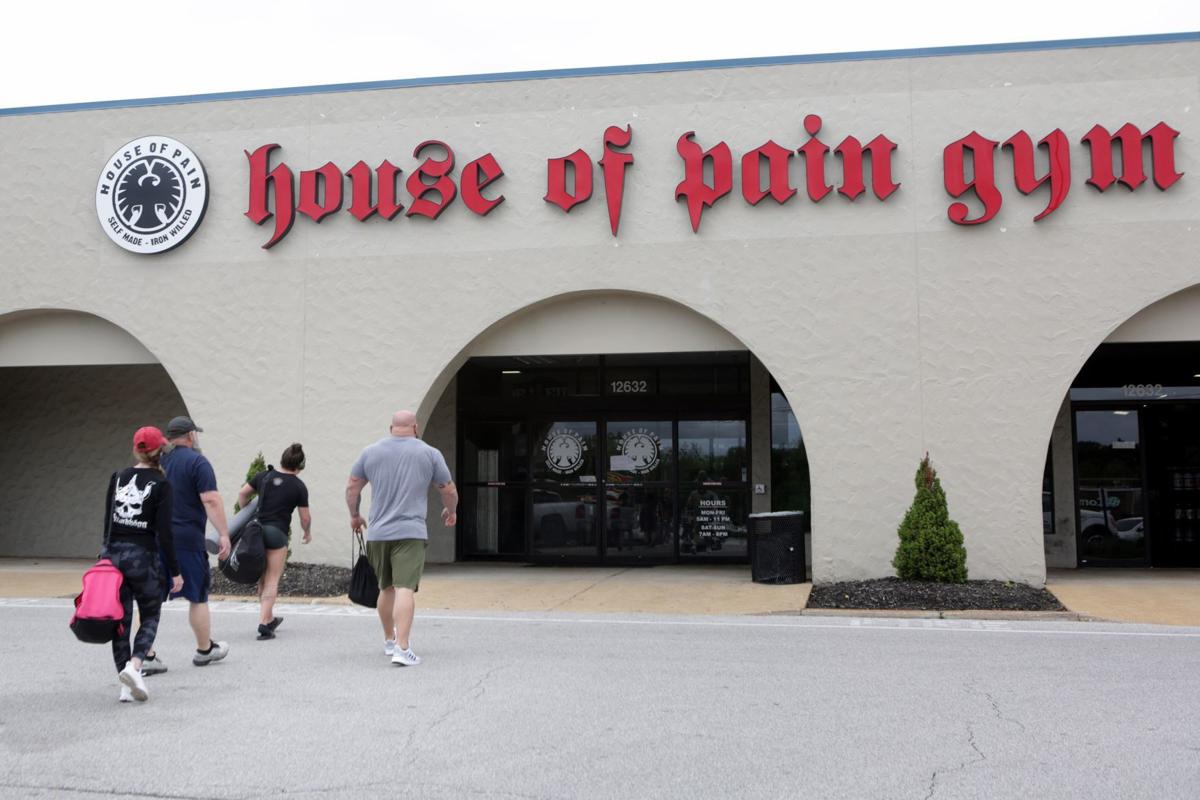 Patrons walk into the House of Pain Gym in Maryland Heights on Monday, May 18, 2020. The gym opened for business despite a St. Louis County order barring it from operation during the coronavirus pandemic. (Hillary Levin, hlevin@post-dispatch.com)

CLAYTON — A federal judge on Friday ordered the closing of two fitness centers that had stayed open in violation of St. Louis County’s stay-at-home order, bolstering the county’s claim that it has the authority to shut down activity during a health emergency.

U.S. District Judge Ronnie L. White ruled that House of Pain gym locations in Maryland Heights and Chesterfield were endangering public health and putting their members at increased risk of catching and unknowingly spreading the coronavirus. He ordered them closed for 14 days or until he decides whether the closure should last longer.

Within an hour of the ruling, a Post-Dispatch photographer talked with customers in the parking lot of the Maryland Heights location who had been asked to leave as they were working out. W. Christopher McDonough, a lawyer for the gyms, said the gyms were on the verge of insolvency and might never reopen.

House of Pain started letting customers inside May 4, the day Gov. Mike Parson lifted the state’s emergency stay-at-home order. At that time, St. Louis County Executive Sam Page said the county’s stay-at-home order requiring nonessential businesses to cease operations would remain in force because of the higher incidence of COVID-19 cases in the metro area.

Days later, Page announced that more businesses would be allowed to let customers inside starting May 18, but gyms were not included. Page said Friday that gyms would not be permitted to operate before June 15.

House of Pain was not the only entity to flout the county’s rules. In the days before the state emergency order expired, the mayor of Eureka said his city would follow the state and buck the county’s directives for nonessential businesses to remain closed. The mayor later changed his mind, and it wasn’t clear if any businesses in the city went through with plans to open.

House of Pain’s defiant stance became a cause célèbre among those eager to restart the area economy or who felt Page was overstepping his authority.

The county counselor’s office sent House of Pain letters on May 5 ordering the gyms to cease and desist or explain why they didn’t have to comply with the emergency order. In response, McDonough, a Republican who is running for associate circuit judge in St. Charles County, copied Parson, President Donald Trump and U.S. Attorney General William Barr on a response claiming the county was violating his client’s constitutional rights.

After the businesses ignored the county’s May 10 deadline to close, the county took the dispute to circuit court. McDonough delayed hearings twice and then moved the case to federal court.

White, the judge who made the ruling, said claims of constitutional violations were “not well-taken” and by acknowledging the state had a duty to “flatten the curve” of infection rates, the defendants admitted the county had the same responsibility.

McDonough claimed the county exceeded its authority, but White pointed to state guidelines that give local governments power to enact measures that are more stringent than the state’s.

While McDonough argued it was unfair that gyms were being treated differently than gyms that were open in other counties, professional sports facilities or other retail businesses, White said the county had valid reasons for treating them so. White said county health officials were reasonable in their belief that gyms by their nature created a higher risk for transmitting disease than a store in which someone might come in, shop and promptly leave.

White said the gyms should keep a record of every person who entered since they started letting customers inside on May 4.

The county had demanded that House of Pain pay the cost of testing every person for the coronavirus, and the gyms said that would cost more than $200,000. White said the county did not provide any support for testing people who do not have symptoms of COVID-19. However, if the county can show that any of the patrons are infected, White said he will reconsider the request.

White ruled that any violation of the order will give rise to sanctions he did not specify.

In comments earlier Friday, Page addressed the frustration among people who want fitness centers to open.

“Everybody’s frustrated,” he said. “Everyone whose business is limited and that’s their way of life, that’s their way to make a living, are extraordinarily frustrated. That’s natural, that’s to be expected. And I respect that and I understand that.”

But because people working out can’t wear masks while they breathe deeply, gyms remain a high-risk transmission environment “and we have to be very thoughtful about it.”

After the ruling, Doug Moore, a spokesman for Page, said, “We are pleased with the judge’s ruling.”

McDonough said his client was disappointed but “we remain confident that ultimately we will prevail on the merits of the case and, more importantly, the Constitution will prevail.”

He said House of Pain “certainly respects the authority of the court to do what it did ... and we will, of course, immediately comply with it.”

McDonough also had asked White to dismiss the case because the county had not exhausted an administrative process to close the gyms under a nuisance ordinance that would take up to 80 days. But White ruled that during a health emergency the county did not have that long to wait and therefore could ask the court for relief.

Police are now investigating the circumstances surrounding the deaths of Kanisha Richardson, 37, and two-year-old, Ava Richardson.

Patrons of House of Pain gym in Maryland Heights pause in the parking lot on Friday, May 22, 2020, after being forced to abandon their workouts moments after a judge ruled against the owner and ordered it to close under a St. Louis County health order. (Christian Gooden, cgooden@post-dispatch.com)

Patrons walk into the House of Pain Gym in Maryland Heights on Monday, May 18, 2020. The gym opened for business despite a St. Louis County order barring it from operation during the coronavirus pandemic. (Hillary Levin, hlevin@post-dispatch.com)