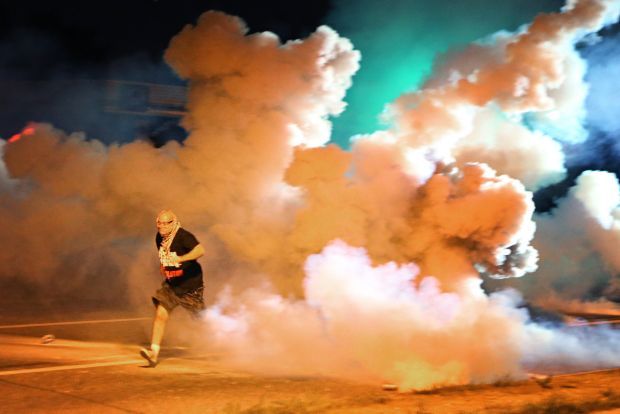 A protester runs tear gas exploding around him on Wednesday, Aug. 13, 2014. Photo By David Carson, dcarson@post-dispatch.com 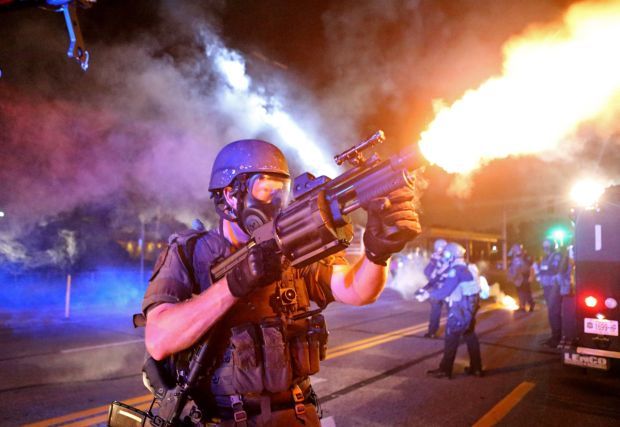 A member of the St. Louis County Police tactical team fires rounds of tear gas into a crowd of people in response to a series of gun shots fired at the police during demonstrations along West Florissant Avenue near the QuikTrip in Ferguson on Monday, Aug. 18, 2014. Photo By David Carson, dcarson@post-dispatch.com

ST. LOUIS • A federal judge heard testimony from three people who complained of excessive police tactics — including indiscriminate use of tear gas — and then provided limited relief Thursday in a temporary restraining order.

U.S. District Judge Carol Jackson’s order requires police to warn crowds of impending use of tear gas and provide “reasonable” time for people to disperse first. But she did not define what is reasonable, saying that would be at police discretion.

She rejected a request for an order that tear gas be used only as a “last resort,” saying there was no way to gauge that circumstance.

Jackson showed sympathy for some of the complaints, for example a failure to distinguish among targets of enforcement action. “There was no distinction drawn in the way peaceful protesters were treated and the way criminals were treated, even though the police do make those distinctions in other situations,” she said.

She also said, “People involved in peaceful, nonviolent political speech can do that without being lumped in with the criminals.”

Plaintiffs testified in detail about things police did at various times in Ferguson and St. Louis — from shortly after Ferguson police Officer Darren Wilson shot Michael Brown in August, to the violent reactions after a grand jury decided in November not to indict Wilson.

Police officers for St. Louis and St. Louis County testified in Thursday’s hearing that they did what was necessary to control sometimes unruly protests.

Lt. Steven Dodge, the city SWAT commander, said there were instances in which shots were fired from crowds, or businesses looted, so a quick reaction was required.

Mark Lawson, an attorney for the city, asked Dodge whether tear gas prevented property damage. The officer replied, “There’s no doubt in my mind.” Then Lawson asked if it might even have saved lives. Dodge replied, “Absolutely.”

County police Capt. Kurt Frisz said that on the night of the grand jury announcement, SWAT officers in Ferguson did provide instructions of where protesters should go before using tear gas, although some said the recommended path was blocked by another police line.

Jackson expressed some concern about police consistency. She noted that protesters who blocked South Grand Boulevard were met with tear gas while others the same night who blocked Interstate 44, not far away, were not.

Plaintiffs’ attorneys complained before the hearing that police intimidated demonstrators, assaulted them with tear gas and pepper spray, arbitrarily labeled gatherings as unlawful assemblies and refused to wear name tags that might have provided accountability.

“What they’re doing is punishing people for being out protesting,” said lawyer Thomas B. Harvey. “It’s having a chilling effect on their First and Fourth Amendment rights.”

Winston Calvert, the St. Louis city counselor, said his department showed “a high level of tolerance” while remaining mindful of “an obligation to enforce the law.”

Bob Grant, deputy St. Louis County counselor, said, “Our position is that the police acted properly and did not use excessive force or use weaponry that was uncalled for.”

A representative of the attorney general’s office, which represents the highway patrol, declined comment.

Among the plaintiffs were three who testified Thursday: Alexis Templeton, 20, of Ferguson who was hit with tear gas multiple times while demonstrating there; Kira Hudson Banks, 35, a St. Louis University professor hit with tear gas; and Steven Hoffman, 31, a trained “legal observer” for the National Lawyers Guild, who said he was subjected to tear gas and had guns pointed at him by police. Templeton and another plaintiff, Brittany Ferrell, 25, are co-founders of Millennial Activists United.

Harvey, their attorney, has said that, “We’re not asking for crazy things here. Wear your ID. If you’re going to make your announcement to disperse, give people the right, a place, a way that they can comply with that order, and if you’re going to declare something an unlawful assembly, follow the statute.”

Ferguson protesters charged in attack of man at strategy meeting

Four were charged with robbery. Police are trying to figure out who a fifth suspect is.

McClellan: A judge's generosity is reversed

Police settle lawsuit over tear gas use during Ferguson protests

Officials agree to give warning and provide escape route.

Eleven police SWAT teams faced off last weekend in a two-day test of skill at a tactical contest in Fredericktown, Mo., about 80 miles south o…

Police stand off with protesters on West Florissant Ave. in front of the burned out Quik Trip in Ferguson on Wednesday, Aug. 13, 2014. Tear g…

Go behind the scenes with police tactical team in Ferguson

Video: Protester says she was hit with rubber bullet

Police in riot gear, backed by a SWAT armored car and other police vehicles, fired tear gas into the crowds that gathered again this evening n…

A protester runs tear gas exploding around him on Wednesday, Aug. 13, 2014. Photo By David Carson, dcarson@post-dispatch.com

A member of the St. Louis County Police tactical team fires rounds of tear gas into a crowd of people in response to a series of gun shots fired at the police during demonstrations along West Florissant Avenue near the QuikTrip in Ferguson on Monday, Aug. 18, 2014. Photo By David Carson, dcarson@post-dispatch.com