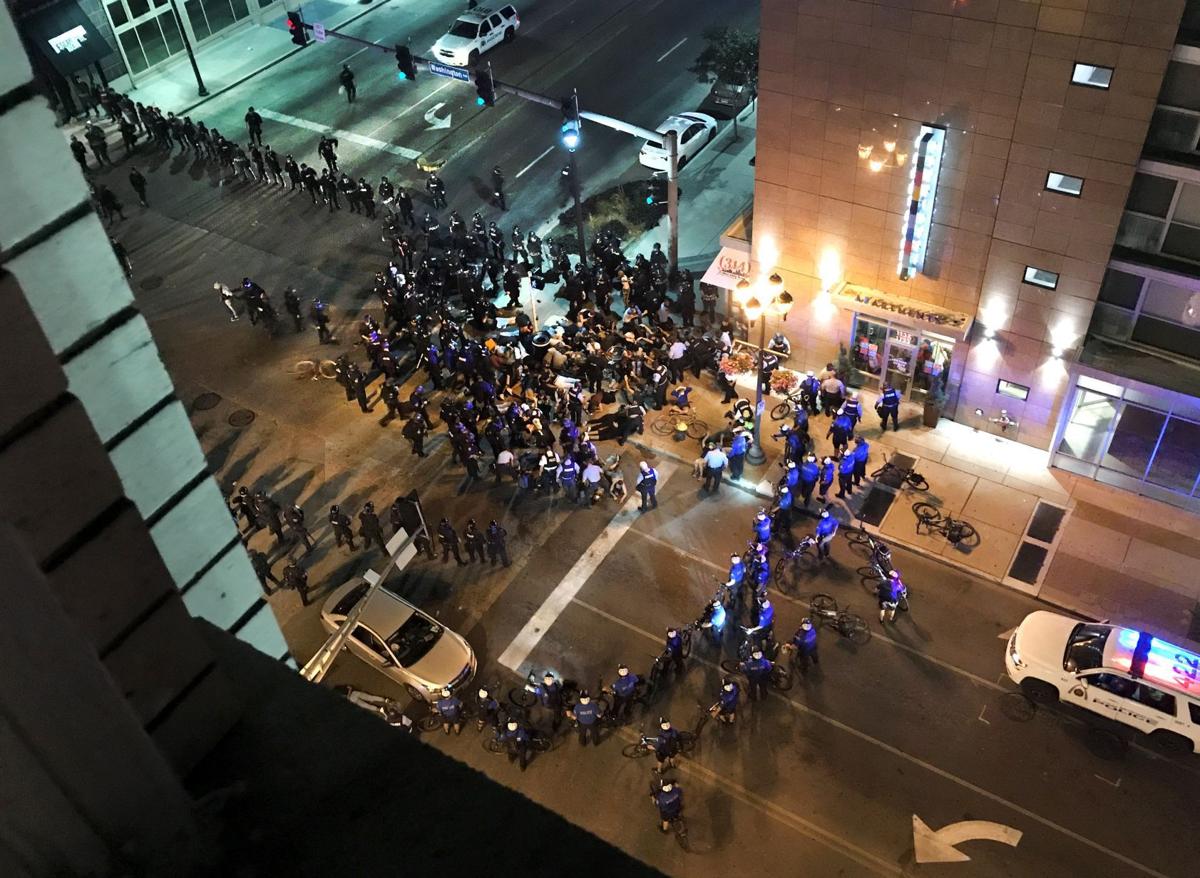 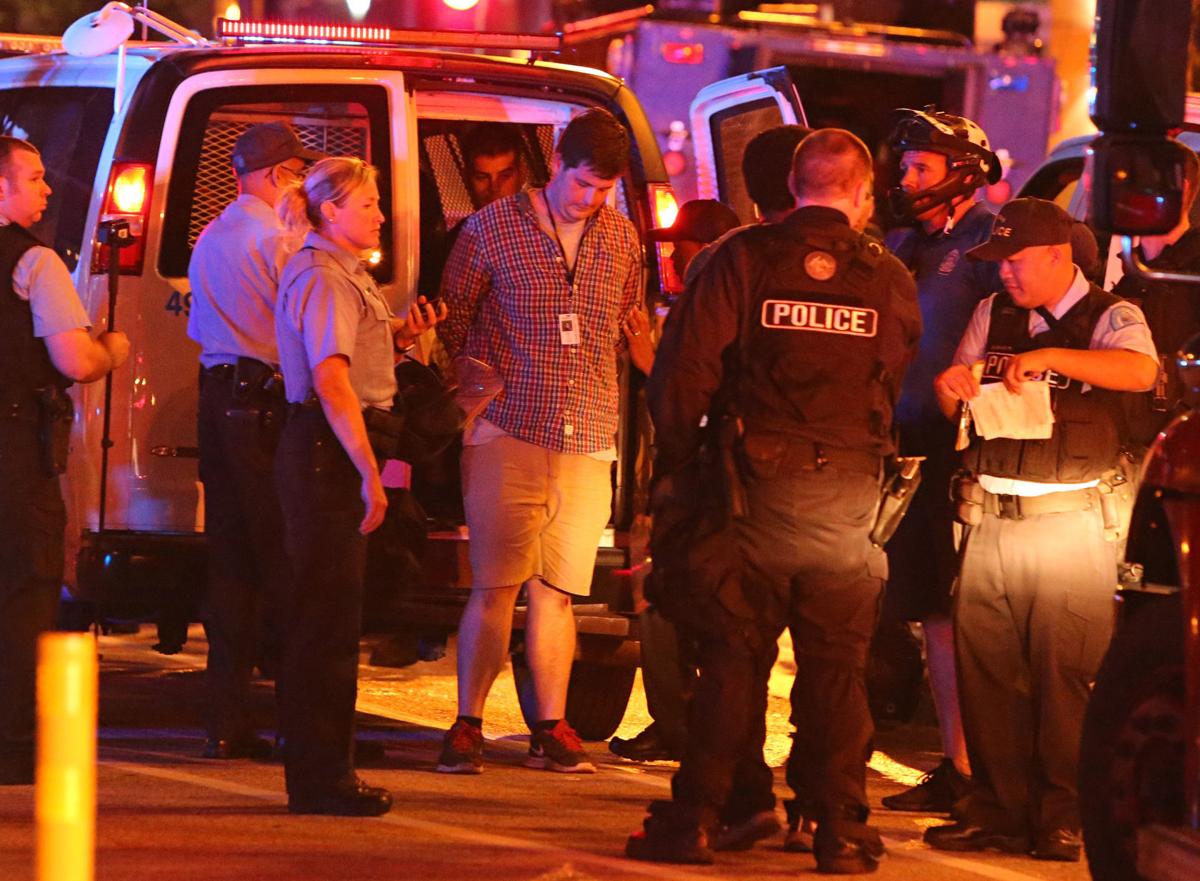 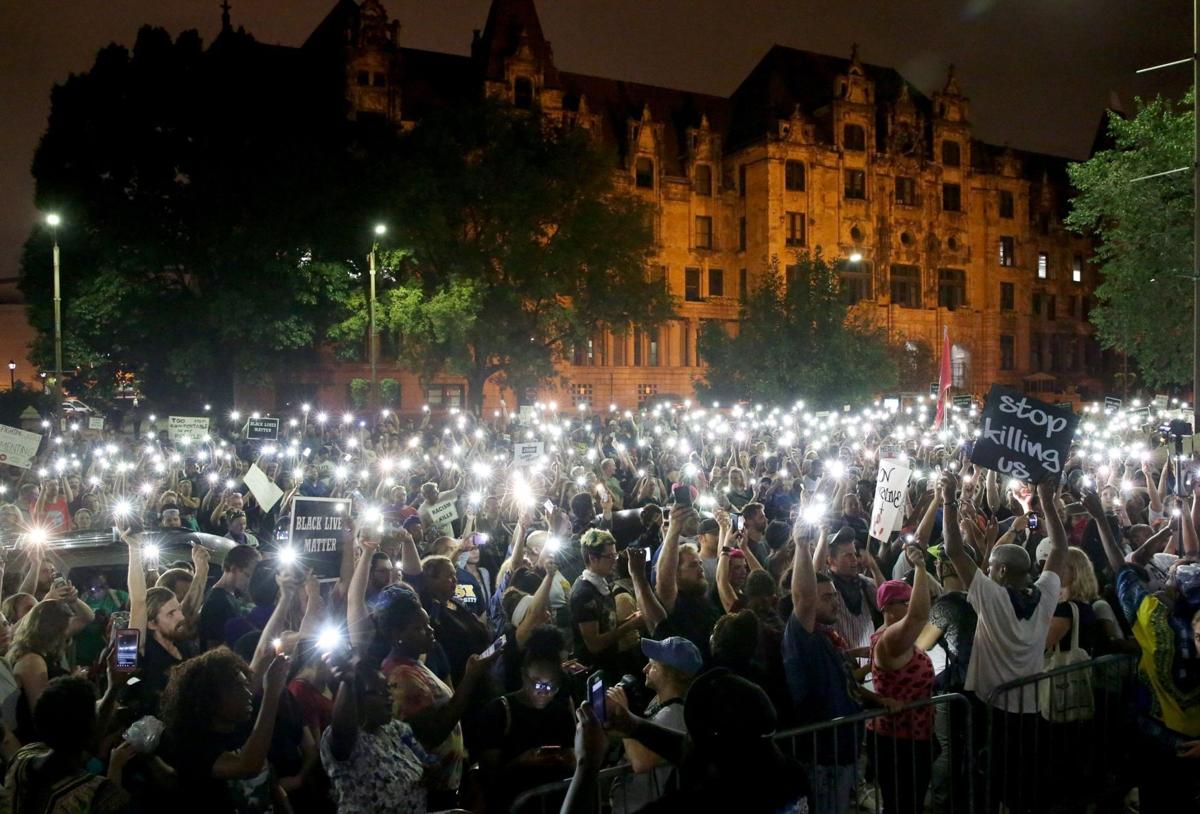 Qualifying her comments by saying lawyers for the city of St. Louis had only time to respond with partial testimony from one witness, U.S. District Judge Catherine Perry also questioned whether solutions proposed by the ACLU suit would require her to “micro-manage things” or be any more enforceable than issues raised by a 2014 federal case in which police agreed to provide a reasonable warning before using tear gas.

The testimony came during a hearing over whether Perry should issue a preliminary injunction regulating police activity before the underlying lawsuit, filed last month, is heard.

Sixteen people testified for the ACLU Wednesday, including protesters, a legal observer, a videographer, a candidate for St. Louis license collector, a businessman, a city alderman and downtown residents.

Those who were watching or were protesting told Perry they were not committing any crimes but were hit with pepper spray by police. Many said that they did not hear any orders to disperse, and no warnings that Mace or pepper spray would be used. They said the experience made them scared to protest.

The protests followed the not guilty verdict on Sept. 15 in the murder trial of a former St. Louis police officer who fatally shot a drug suspect.

Lawyers for the city questioned what those who testified knew about any violent or illegal activity, including people who threw rocks and bottles at police.

One named plaintiff in the suit, Alison Drieth, said it felt like her face was “melting” after she was sprayed near City Hall.

Another, Maleeha Ahmad, said, “You can’t see. You can’t breathe and you think the world has ended.”

Restaurateur Chris Sommers said police shot pepper balls and tear gas at him when he questioned their presence outside his Central West End pizzeria.

Alderman Megan Green said that she was tear-gassed by an armored police vehicle after the Central West End protest was broken up that same night.

Six witnesses spoke of their arrests during a police “kettle” the night of Sept. 17, when they were corralled, pepper-sprayed and arrested at Tucker Boulevard and Washington Avenue. ACLU lawyers also showed a video of the arrests captured by independent journalist Jon Ziegler, known online as Rebelutionary Z.

More than 120 people were arrested for “failure to disperse,” including an Air Force lieutenant who lived nearby, a photojournalist for Getty Images, an undercover St. Louis police officer and Post-Dispatch reporter Mike Faulk, who was assigned to cover the protest.

St. Louis police Lt. Timothy Sachs, commander of the tactical operations division, was the last person to testify Wednesday. He gave a detailed account of the first day of protests, saying police just watched at first, but intervened when the civil disobedience team was trapped on buses by protesters. Sachs said protesters were throwing rocks and bottles at police, injuring officers. Individual officers used pepper spray, he said, to clear protesters.

On Sept. 16, after a separate Central West End protest officially ended, a group Sachs estimated at more than 500 ended up at Mayor Lyda Krewson’s house and broke windows and splattered the home with paint. Officers were overwhelmed, he said, and responding tactical officers were hit with bottles, rocks and bricks. Police used tear gas and pepper balls to move protesters away.

Police heard several gunshots as they followed protesters through the streets, and were still being hit by thrown objects and what Sachs said was some type of irritating chemical agent deployed by protesters.

Sachs’ testimony will continue Thursday, along with that of at least four other police witnesses.

Sachs and a city lawyer had said that pepper spray was not considered a chemical munition and police didn’t need to warn before using it.

Perry had her own warning for them, however, about police spraying pepper spray in the faces of unresisting protesters. “Nobody’s going to argue that that’s OK,” she said.

The ACLU sued the city of St. Louis on Friday, Sept. 22, 2017, over police conduct during protests of the acquittal of Jason Stockley, a forme…