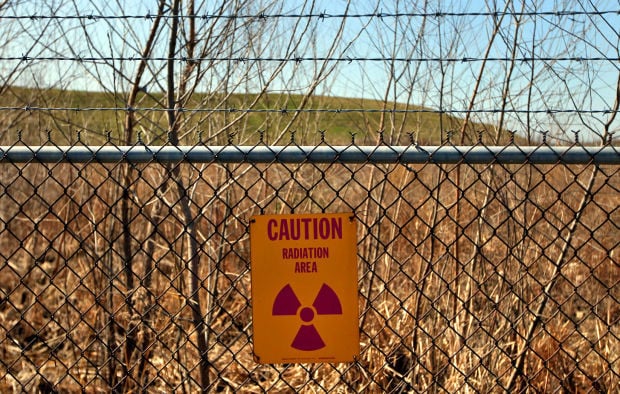 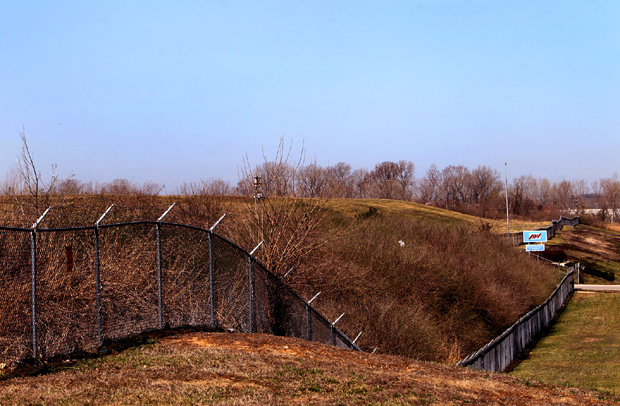 This March 2012 photo shows a section of the West Lake Landfill in Bridgeton. Photo by Laurie Skrivan, lskrivan@post-dispatch.com 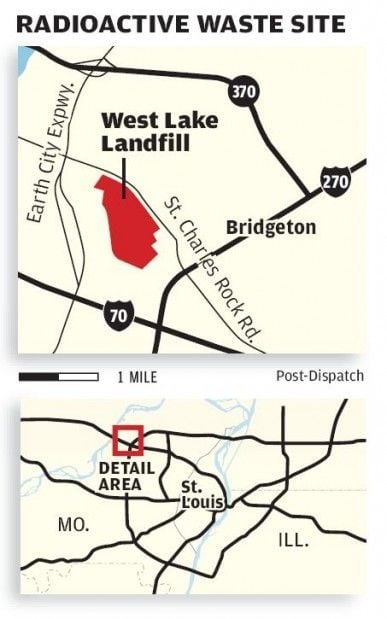 ST. LOUIS • A lawyer for a man who has lived near the West Lake Landfill in Bridgeton for more than 30 years, and the lawsuit he filed Friday, say ﻿radiation has spread to nearby properties, potentially affecting the health of area residents and employees.

The lawsuit is based on preliminary testing from the Missouri Coalition for the Environment. Ed Smith of the coalition said soil samples were taken from various sites outside the landfill and indicate levels of radiation high enough to “warrant further analysis.”

“We have confirmation of radioactive contamination on multiple scattered sites, some a significant distance from the landfill, which are at levels that require remediation,” Finney wrote in an email in response to questions from the Post-Dispatch. “Given the history of West Lake Landfill these results are hardly surprising.”

Finney declined to comment in detail about the testing﻿, but said ﻿it was ﻿performed at multiple locations.

“We are confident that the results are the reality of the situation up there,” he said.

Officials at the U.S. Environmental Protection Agency have said ﻿the nuclear waste is contained to West Lake.

“All validated scientific data available to EPA establishes that current conditions at the site are protective of public health,” David Bryan, an agency spokesman, said Friday.

Although there has been testing on the West Lake site and of surrounding air and groundwater, no public agency appears to have tested the soils farther away for radioactivity, or at least publicly announced that it was testing. Dust from nearby areas, including a residence and the Bridgeton Municipal Athletic Complex, was tested by the state last year and found to be at acceptable levels.

Smith of the environmental coalition said the group’s testing started earlier this year, and results will be made public by the end of the year.

The lawsuit was filed on behalf of John James, a resident of the nearby Spanish Village neighborhood, against landfill owner Republic Services and others, and seeks approval for class-action status to represent property owners within three miles of the landfill.

It says ﻿the activities at the landfill were “abnormally dangerous,” both because of their release of radioactive and toxic materials and their proximity to residential neighborhoods.

Area residents and employees of nearby businesses have long complained of the odors from the smoldering waste at the adjacent Bridgeton Sanitary Landfill, and expressed fears of what could happen should the underground fire spread to West Lake, where waste generated by uranium processing was diluted with soil and used to cover refuse in the 1970s. A nuisance lawsuit filed by six Bridgeton residents is also pending in federal court.

The EPA is re-evaluating its 2008 decision to cap the radioactive waste at West lake rather than remove it, driven by community concerns and the proximity of the fire. An underground barrier is also in the works between the two landfills. Republic Services recently launched a lobbying group that seeks to keep the waste at the landfill.

Richard Callow, a spokesman for Republic Services, released a statement Friday that said﻿: “EPA has determined and recently confirmed that nobody can be exposed to radiation from West Lake outside the barbed-wire fence that surrounds the site. We have not seen the off-site testing data Mr. Finney claims to possess, and therefore cannot comment on them. We have now seen the complaint he filed, and expect to move to dismiss it for failure to state a legally-sufficient claim.”

Dawn Chapman of Maryland Heights, who leads a community group on landfill issues, said nearby residents were concerned about the youth ball fields at the Bridgeton Municipal Athletic Complex less than a mile from the landfill.

“I can guarantee you that’s where everybody’s minds are going to go,” Chapman said. “There are going to be a lot of really, really scared people in Bridgeton tonight.”

Bridgeton landfill owners to pay nearby residents $6.8 million in lawsuit over stink

The people in the 400 homes closest to the landfill will be compensated for the stink they've had to endure.

Baseball tournament moved from Bridgeton over worry about landfill, radioactivity

'We’re moving from that location in the best interest of our company and our customers,' tournament director says.

At ball fields across the St. Louis region this week, many conversations between innings likely went something like this:

The let's-keep-radioactive-waste-buried-in-Bridgeton crowd is not what it's pretending to be.

More than a group of concerned citizens who say they don't want contaminated waste transported through their communities, the righteously named “Coalition to Keep Us Safe” is a political campaign in action.

McClellan: Auto repair shop next door to Hades is forced to move

Dan Rose won't be able to sell his shop next to the Bridgeton Landfill to build his retirement nest egg.

Molly Teichman, a conservative political commentator, is handling public relations for the coalition.

Army Corps of Engineers to work on burning Bridgeton Landfill

Corps will help build an isolation barrier between landfills.

This March 2012 photo shows a section of the West Lake Landfill in Bridgeton. Photo by Laurie Skrivan, lskrivan@post-dispatch.com