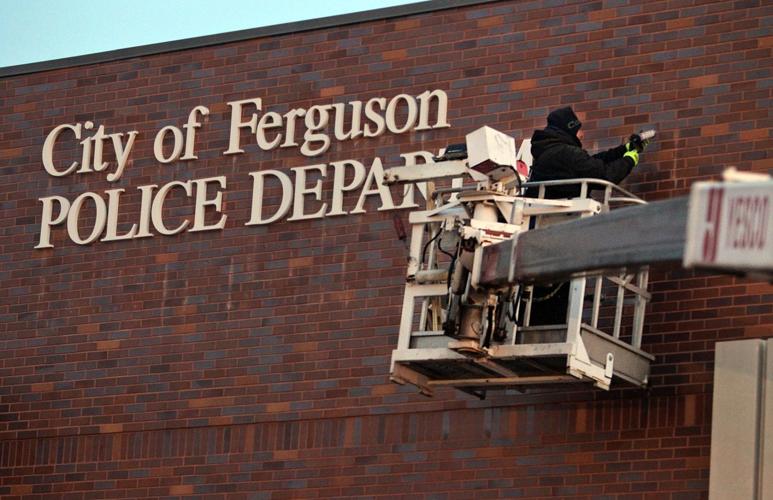 Vinny Casalotta, from Yesco Sign and Lighting, puts up the signs for the new Ferguson Police Station and Municipal Courts on Thursday, Nov. 20, 2014, in Ferguson. Photo by J.B. Forbes, jforbes@post-dispatch.com 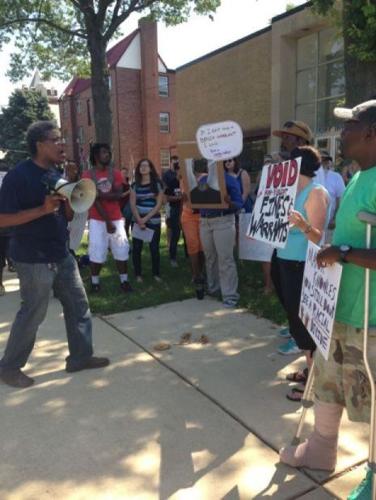 ST. LOUIS •  Federal class-action lawsuits filed Sunday against the cities of Jennings and Ferguson allege that jails there operate as modern-day debtors’ prisons.

The suits were filed in U.S. District Court in St. Louis on behalf of 15 plaintiffs — referred to as “impoverished people” — who were jailed because they could not pay fines for traffic violations and other minor offenses.

“They were threatened, abused and left to languish in confinement at the mercy of local officials until their frightened family members could produce enough cash to buy their freedom or until city jail officials decided, days or weeks later, to let them out for free,” the complaint states.

The suits were filed on behalf of the plaintiffs by the non-profit legal organization Equal Justice Under Law, based in Washington, and the ArchCity Defenders, a local non-profit group; and by St. Louis University School of Law.

“We are seeking an injunction against the Jennings and Ferguson courts in order to stop them from consistently violating peoples’ rights and locking them in jail as a result of their inability to pay,” lawyer Thomas Harvey, executive director of ArchCity Defenders, said Sunday night.

Harvey said the lawsuits were in the works for about three months.

ArchCity Defenders has criticized St. Louis County municipalities for years. Their work intensified in the wake of the shooting six months ago of Michael Brown, 18, by a Ferguson police officer.

Harvey said some claims listed in the class-action suits were problems in other north St. Louis County municipalities, but that Jennings and Ferguson were targeted for litigation for jail conditions there that he said were particularly poor.

According to the suit, plaintiffs “are kept in overcrowded cells; they are denied toothbrushes, toothpaste, and soap; they are subjected to the stench of excrement and refuse in their congested cells; they are surrounded by walls smeared with mucus, blood and feces; they are kept in the same clothes for days and weeks without access to laundry or clean undergarments...”

Conditions in the Jennings jail are so deplorable, the suit contends, that when inmates are brought to court, "courtroom staff often walks down the hallway spraying Febreze (air freshener) because the stench emanating from the inmates is unbearable."

The suits claim that guards at both jails "routinely laugh at the inmates and humiliate them with discriminatory and degrading epithets about their poverty and their physical appearance."

The suits allege that money motivated the municipal court systems.

“The … modern debtors’ prison scheme has been increasingly profitable to the (cities), earning (them) millions of dollars over the past several years,” the suits state.

Ferguson Mayor James Knowles III said Sunday night that he had not seen the suits.

He said the city’s jail is currently closed for renovation.

“I know that we just underwent a massive renovation of the police department, including the jail facilities,” Knowles said. “I can tell you the city has spent a lot of time and money investing in those facilities and when they reopen ... they will be top of the line.”

Knowles denied that Ferguson’s court operated as a cash cow for the city.

“Profit was not a motive — absolutely not. As far as the application of fines, the setting of bails, etcetera, that’s not something determined in conjunction with city budget demands,” he said.

Some of the plaintiffs in the suit are described as homeless, such as Edward Brown, 62, of Jennings. Brown has received numerous tickets over the years and incurred fines that he could not pay, resulting in extended jail incarcerations. During one court appearance, in 2012, Brown “begged the (Jennings) judge to let him go because he could not afford to pay.”

The judge, in fact, did release Brown on that occasion. But when he was released, Jennings “held him in custody until the city of Pine Lawn picked him up, and he again languished in the Pine Lawn jail for several days” because he owed a fine in that city.

The suit describes the experiences of one plaintiff, Keilee Fant, as a "Kafkaesque journey."

Fant, 37, is a single mother who works as a certified nurse’s assistant. Over the past 20 years, the city of Ferguson has jailed Fant more than a dozen times for her inability to make payments on old traffic tickets.

Harvey, with ArchCity Defenders said, “These are poor people struggling to make it week-to-week. These courts have prevented them from living a normal life.”

“These are systems that are immoral, unethical and clearly illegal, as well.”

Lawsuit claims poor conditions at jails in Jennings and Ferguson; decry them as modern-day debtors' prisons.

Bill would set lower cap on revenue from traffic tickets.

Over 1,000 people apply for one police dispatching position.

Man who hanged himself in Jennings had been on suicide watch

Attorneys and political leaders in Jennings are leading the way for other local municipalities by agreeing to pay $4.7 million to people who were jailed for unpaid court debts, most of them for minor offenses.

Money from the north St. Louis County municipality will be paid to an estimated 2,000 people, most of them poor and black, who were jailed for a total of 8,359 days over five years.

Municipal court reforms gaining momentum, but how far will they go?

While law professors and activists call for dramatic reforms for municipal courts in St. Louis County — including getting rid of them — more m…

He dies weeks after he apparently tried to hang himself.

Vinny Casalotta, from Yesco Sign and Lighting, puts up the signs for the new Ferguson Police Station and Municipal Courts on Thursday, Nov. 20, 2014, in Ferguson. Photo by J.B. Forbes, jforbes@post-dispatch.com