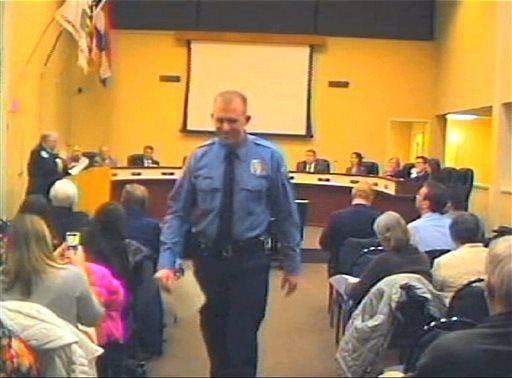 In this Feb. 11, 2014 image from video released by the City of Ferguson, officer Darren Wilson attends a city council meeting in Ferguson. Wilson is the officer who shot and killed Michael Brown on Aug. 9, 2014. 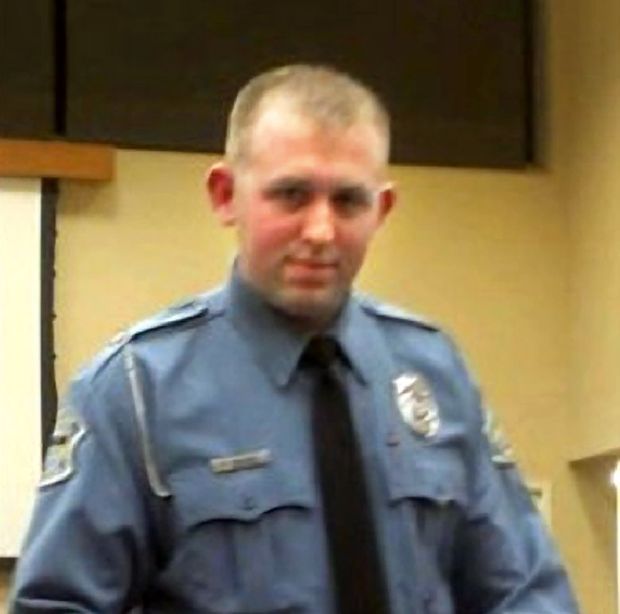 Twelve days after he shot and killed an unarmed teen, the Ferguson police officer behind the gun remains an enigma.

While state and federal prosecutors investigate whether crimes were committed in the Aug. 9 killing of Michael Brown, and hundreds march to protest Brown’s death, Officer Darren Wilson has not been seen in public or made any public statements.

By the time police released his name on Friday, any social media accounts had been deactivated. Just one photograph of him emerged, apparently scraped from his father’s Facebook account by Yahoo! News before the account was deactivated.

A handful of supporters have spoken on his behalf; none from his inner circle. Union officials from Missouri Fraternal Order of Police Lodge 15 did not return calls and messages seeking comment last week. His attorney has declined to comment.

Some have said they saw Wilson shoot Brown after Brown raised his hands in surrender. No one has publicly corroborated what police said was Wilson’s version of the confrontation, in which Brown reached into the police car and attacked him. Perhaps the most widely shared telling of what is purported to be his perspective came from a woman who identified herself as a friend of Wilson and spoke on a radio show using a pseudonym.

Wilson hasn’t responded to calls or texts. Neither have his close friends or family members.

He’s taken a different path than central figures of almost every other major national crime story from the past decade. In those cases, clues could be found on Facebook, Twitter and other social media, or they were described by friends and loved ones.

Additionally, authorities have released essential details in other major crimes. That has not happened in Ferguson.

“I can’t remember any time in the last 10 years, at least, where somebody’s completely gone into hiding, for fear of his life,” said Jonathan Bernstein, president of Bernstein Crisis Management in Los Angeles. “Frankly, if I’d been advising his family, the first thing I would have said was, ‘Hide.’ In the near term, saving his life is more important than anything else.”

Bernstein, who has written textbooks and training manuals on crisis management, said he thought it unlikely that the disappearance of Wilson and his family from online social media sites was happenstance.

“He’s had some advice to dive down a hole and take cover for now,” Bernstein said. “They’re doing everything possible.”

A few friends have stepped forward. Kevin Gregory, 22, a friend of Wilson for nine years and an aspiring police officer, said he rode along with Wilson on a relatively slow Tuesday night in March and came away impressed with Wilson as a dedicated officer who loved helping people.

“There isn’t even the slightest doubt in my mind: I’m 100 percent sure he feared for his life,” Gregory said. “He reacted just like you’re trained to be as a police officer. You fire at center mass. The largest part of the body of the threat. You’re not trained to fire a few times; you’re trained to fire until the threat is over, and that’s how you get home safely to your family.”

Gregory said there was one condition of the ride-along: He had to wear a bulletproof vest.

He said they responded that night to help ambulance workers with an intoxicated woman of about 40 who was cursing and demanding to be taken to a hospital. He said Wilson told her several times to calm down, explaining he couldn’t let her in the ambulance if it would be dangerous for the paramedics.

“It was more warnings than I think I would give,” Gregory said. “But he made the determination that no way he could let her get on.” He suggested the family take her in their car; the woman’s mother and a sibling took her inside.

More details about Wilson’s life were found in public records. He was born in May 1986 in Fort Worth, Texas, to Tonya and John Wilson. Tonya Wilson was a 19-year-old receptionist at the Metro YMCA and John Wilson, 32, was a teacher and coach in a public school.

The Wilsons divorced in 1989; his mother married Tyler Harris and moved to the St. Louis area. They had a son, Jared, in 1991. In the late 1990s, they moved into a four-bedroom, two-bath house in St. Peters. The Harrises divorced in 1998, and Tonya Harris later married Daniel Robert Durso.

In February 1998, Tonya Harris was charged in St. Charles County with three counts of stealing by deceit for allegedly cashing bogus checks at Truman Bank. In May 2000, she was charged with stealing and forgery. The complaint claims that she took another woman’s credit card and passed a forged check for $9,000. She pleaded guilty to both cases and was sentenced in 2001 to five years of probation.

The Dursos struggled financially, filing for bankruptcy in June 2002. On Nov. 18 of that year, Tonya Durso died of blockages in arteries in her lungs. She was buried in St. Charles Memorial Gardens.

In October 2003, court records show, Tyler Harris filed for limited guardianship of Darren Wilson, so he could register for school and obtain medical insurance. Wilson wanted to finish his senior year at St. Charles West High School. His father signed off on the guardianship, which was canceled when Wilson turned 18.

He graduated in 2004 from St. Charles West, where he is listed on several pages of the yearbook. The first page shows him with a mop of hair, more like a surfer or rock star than the crew-cut police officer depicted in a recent photo. He was on the yearbook staff and played varsity hockey.

Wilson married Ashley Brown on Oct. 15, 2011. They bought a house in Troy, in Lincoln County, in June 2012, but sold it a year later, two months after Darren Wilson filed for divorce and four months after the couple separated. The divorce was finalized on Nov. 18, 2013.

He bought a home in October 2013 in Crestwood, which he now shares with his girlfriend, Ferguson police officer Barbara Spradling.

Wilson worked for Jennings police for two years before being hired by Ferguson police in October 2011. The department has said he had no disciplinary record. His salary was $45,302.

Chief Thomas Jackson has described him as a “quiet, gentle man” and an “excellent officer.” He said Wilson was taken to the hospital after his confrontation with Brown because one side of his face was swollen.

At a City Council meeting in February, Jackson lauded Wilson for his handling of a suspicious vehicle call in which he had to struggle with a man in the car, according to a video of the commendation ceremony.

Wilson, Jackson said, was “able to gain control of the subject and his car keys.” Later, officers discovered that the man was preparing a large quantity of marijuana for sale.

Stephen Deere and Walker Moskop of the Post-Dispatch contributed to this report.

Funeral for Michael Brown will be Monday.

Darren Wilson has married his girlfriend

Officer Darren Wilson is shown in the video, marking the first time the city has shown what the officer looks like.

In this Feb. 11, 2014 image from video released by the City of Ferguson, officer Darren Wilson attends a city council meeting in Ferguson. Wilson is the officer who shot and killed Michael Brown on Aug. 9, 2014.