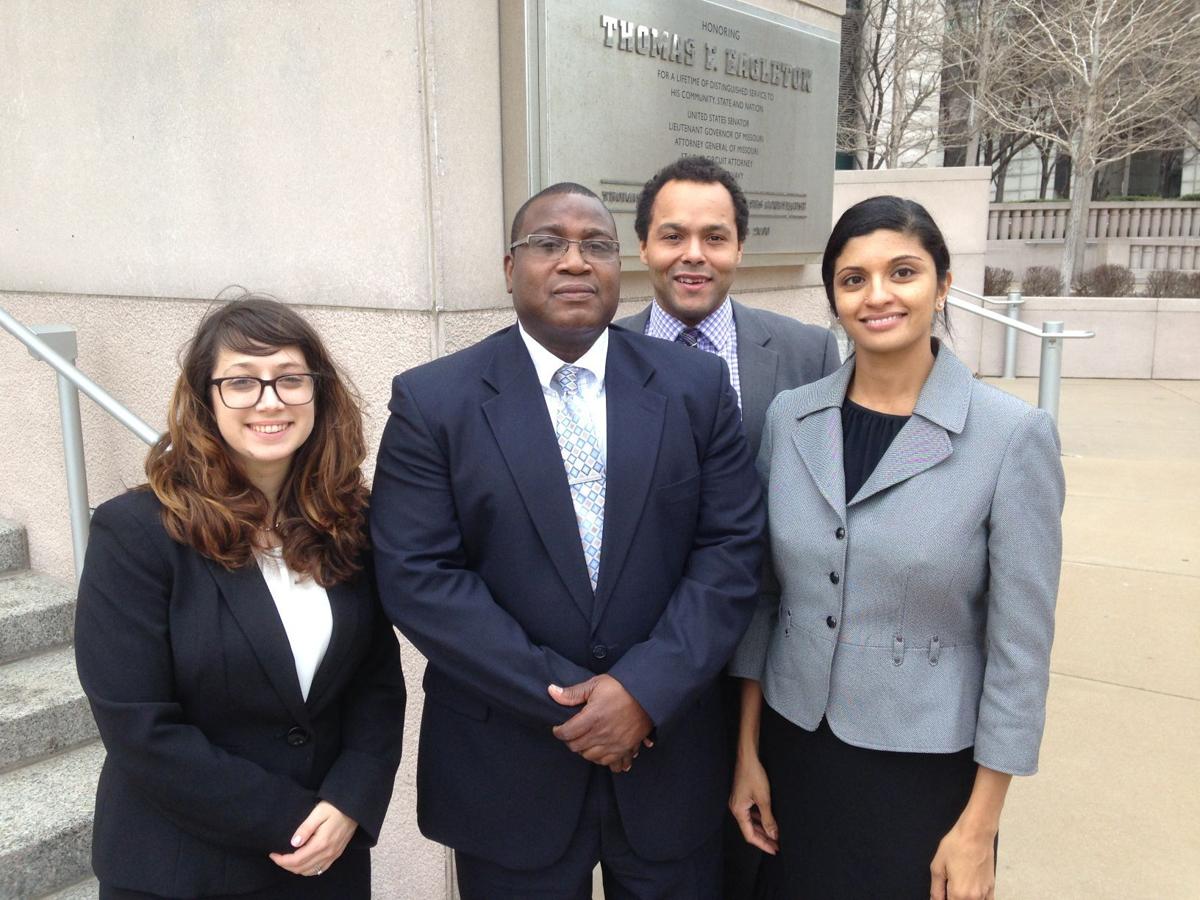 Michael Holmes (center), with his lawyers Sarah Grusin, David B. Owens and Roshna Keen (left to right) outside U.S. District Court in St. Louis after a jury awarded Holmes $2.5 million in a civil suit against two former police officers. Photo by Robert Patrick of the Post-Dispatch 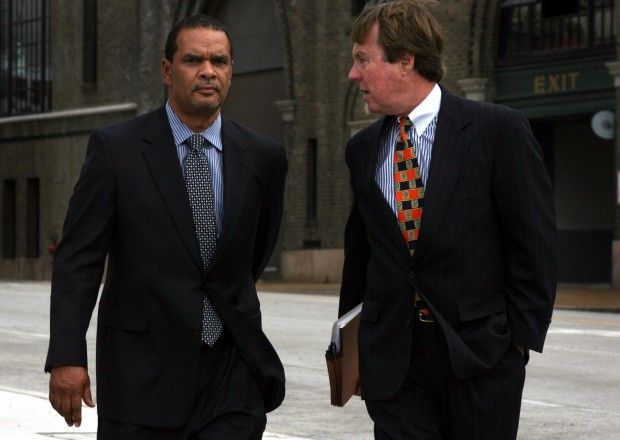 ST. LOUIS • A jury in federal court here Friday awarded $2.5 million to a man who spent five years in prison in a case that involved two former St. Louis police officers, one of whom was convicted of stealing money and planting drugs.

“Finally, after 13 years of fighting, I’ve got exoneration — in my eyes,” Michael Holmes said after the verdict. He called it “a measure of exoneration” because although his conviction was reversed, he is still fighting to be declared innocent.

Holmes claimed in his lawsuit and on the witness stand that former officers Shell Sharp and Bobby Lee Garrett, lied when they said that they found him with drugs in a 2003 raid.

Holmes was later charged, convicted at trial and sentenced to 20 years for crack possession and five more years for possession of a firearm in furtherance of a drug trafficking crime, despite proclaiming his innocence.

But both officers’ reputations were called into question in 2008 and 2009. Defense lawyers said Sharp lied on search warrants, and prosecutors later dismissed some of his cases. Federal prosecutors accused Garrett of stealing money, dealing drugs and planting evidence on innocent people.

Garrett and a partner, Vincent Carr, were arrested in December 2008 and accused of planting evidence, stealing drug money, dealing drugs and arresting an innocent man. Criminal defense lawyers told the Post-Dispatch that dozens of clients had complained about Garrett over the years.

Another officer, sentenced to three months in prison for stealing money, said Garrett had pressured him into taking it.

Garrett was sentenced to 28 months in prison; Carr got 12 months.

A judge tossed out Holmes’ criminal conviction in 2011. Prosecutors said at the time that other officers at the search could have testified in a new trial, but that the seized drugs had been destroyed and they wouldn’t call Sharp or Garrett.

It was not clear who must pay the damages.

David B. Owens, one of Holmes’ lawyers with the Chicago firm Loevy & Loevy, said it could be years before Holmes sees any money. The search occurred before the city assumed local control of the police department from the state, and Friday’s verdict occurred afterward. A pending state lawsuit seeks to clarify the liability.

Holmes’ 2012 lawsuit was one of a series against Garrett, Sharp and their partners or associates, claiming corruption that led to years spent in prison.

Missouri officials settled a suit against Sharp and Vincent Carr for $1 million in December 2014. That plaintiff, Stephen Jones, was freed in 2010 after 12 years.

Another civil suit, against Garrett was settled for $20,000 that year.

Most of the other suits were dismissed on procedural grounds or because the plaintiffs were still behind bars.

In closing arguments Friday morning, Roshna Keen, one of Holmes’ lawyers, said that in a sense he is still imprisoned by the effect of officers’ lies. She said Garrett’s method of operation was to charge the innocent and let the drug dealers go so he could steal their money.

Robert Isaacson, of the Missouri attorney general’s office, said “not one nickel” should go to Holmes, whom he characterized as a drug dealer using lies for profit.

But the jurors took only about an hour, including lunch, to decide in Holmes’ favor. Keen said their speed showed whom they believed.

Outside the courtroom, Holmes told a reporter he suffers from PTSD and nightmares from his time behind bars.

The lawsuit says the state should’ve taken more action after numerous deaths on a treacherous stretch of the Meramec River.

Michael Holmes (center), with his lawyers Sarah Grusin, David B. Owens and Roshna Keen (left to right) outside U.S. District Court in St. Louis after a jury awarded Holmes $2.5 million in a civil suit against two former police officers. Photo by Robert Patrick of the Post-Dispatch