Man killed in shooting on MetroLink train had robbed man on train in 2015, authorities say
0 comments
Share this
{{featured_button_text}}
1 of 3 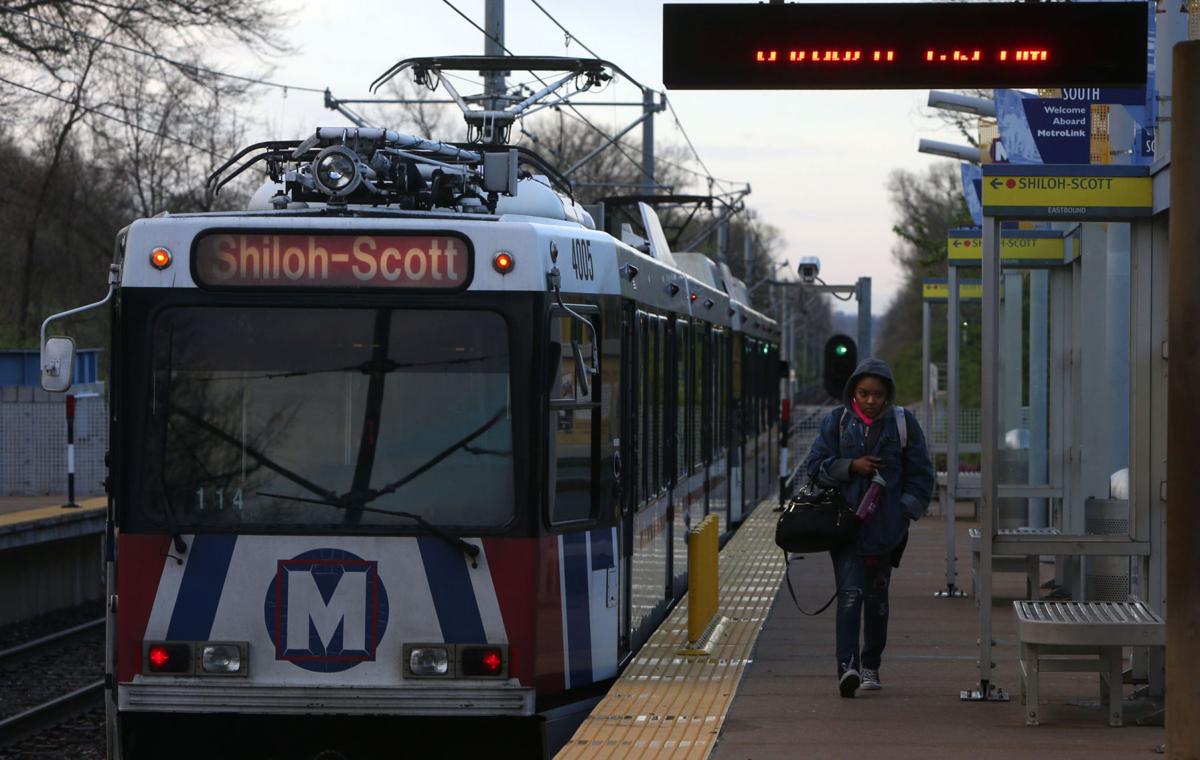 Akila Jackson, 20, arrives at the Univerity of Missouri-St. Louis station near Natural Bridge Road on Thursday, April 6, 2017. A man was shot and killed April 5 on a MetroLink train at the station. Photo by Laurie Skrivan, lskrivan@post-dispatch.com 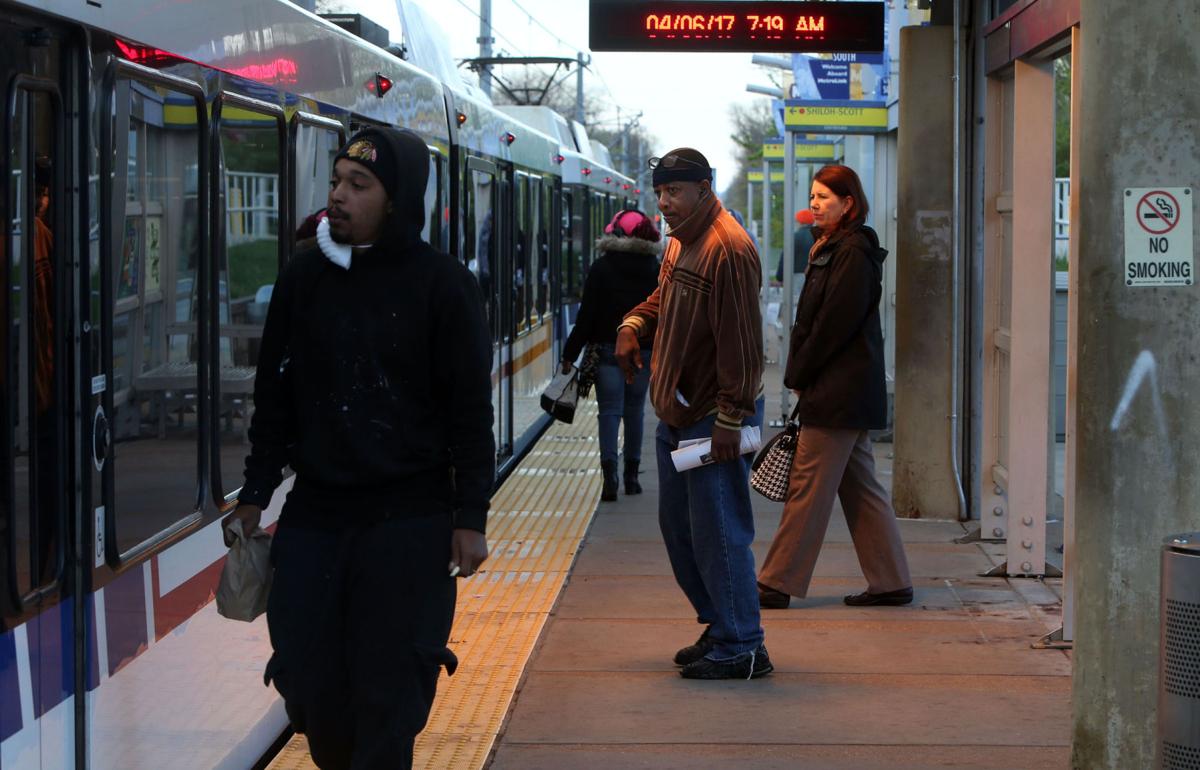 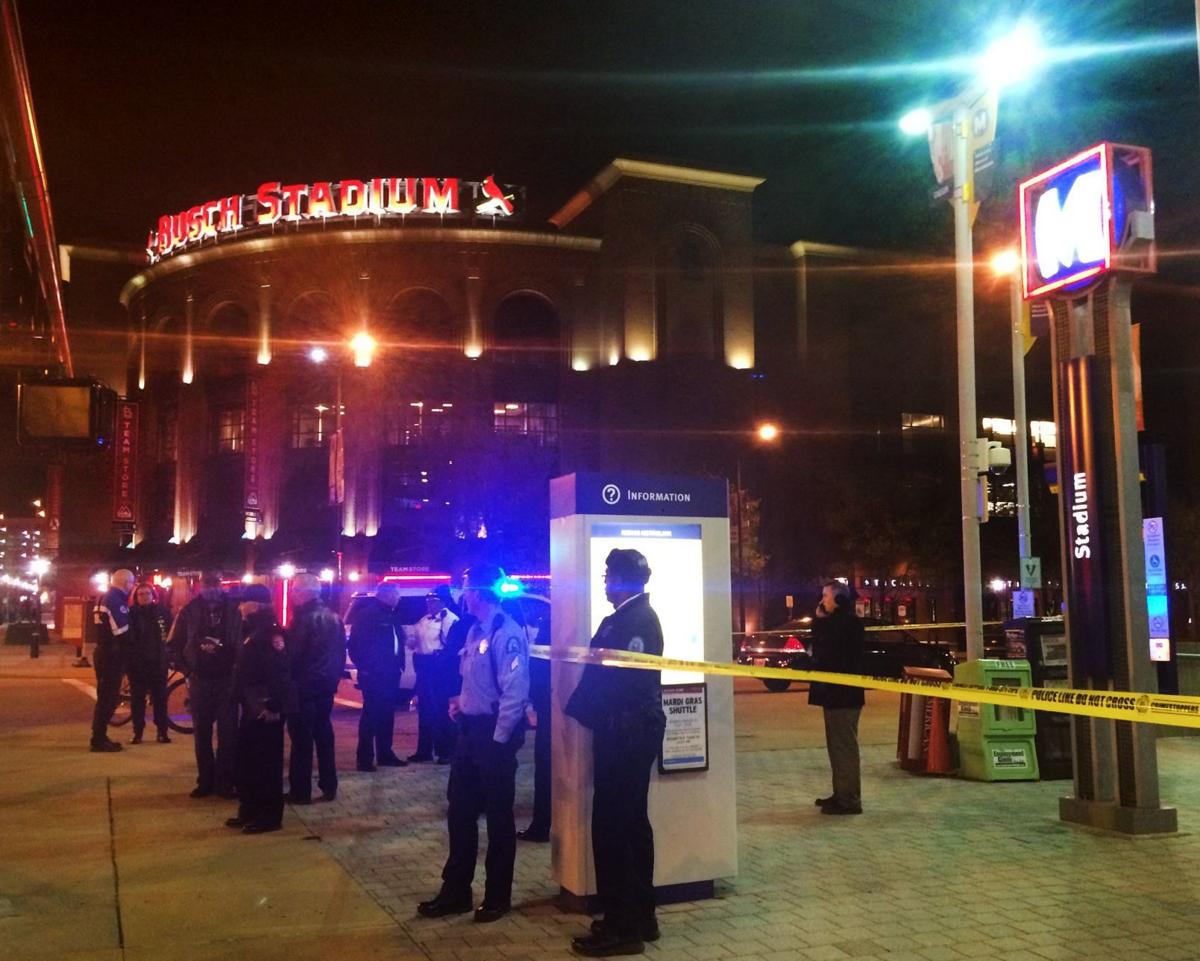 In Wednesday’s attack, police say a man shot Jesse Boone, 22, of St. Louis, in the chest as they rode in the back of the train about 11:15 p.m. The shooting followed a fight between Boone and the gunman as their MetroLink train approached the UMSL South station, near Natural Bridge Road. Authorities did not provide a motive.

Police say they caught Djion Oates, 18, fleeing from the train station with a gun. He was charged Thursday with second-degree murder, armed criminal action and unlawful possession of a firearm. He was held with bail set at $500,000, cash-only.

The shooting came less than six months after the victim had pleaded guilty to a December 2015 robbery on a MetroLink train in St. Louis. Boone was given a suspended seven-year sentence and put on probation in October, according to court records.

Police said the man killed Wednesday lived in the 5600 block of Maple Avenue in St. Louis. The Jesse Boone who pleaded guilty to robbery last year lived in the 4900 block of Maple, according to court records, but a spokeswoman for the St. Louis circuit attorney’s office confirmed that they are the same man.

St. Louis County police said they were aware of Boone’s prior robbery conviction in a MetroLink incident.

In the 2015 robbery, Boone was part of a group of men who attacked a passenger, leaving him bloodied while other passengers watched but did not intervene. Police said Boone had grabbed the victim from behind while another man hit the victim and others went through his pockets.

Boone was charged in March and was sentenced in October after pleading guilty.

In Wednesday’s shooting, police say that about 50 people were on the train at the time and that about a dozen people witnessed some or all of the fight between Oates and Boone. There was no video surveillance available from the train, Metro said.

Neither Boone nor Oates was an UMSL student, police say. Investigators were still trying to determine whether the men knew each other.

When the train stopped, the doors opened and the gunman raced off, running south on the tracks. Police officers caught Oates within minutes and recovered a gun.

Oates lives in the 6700 block of Thurston Avenue in Berkeley, police said. He is on probation for robbing someone at gunpoint of a PlayStation on Oates’ 16th birthday. That crime took place in Florissant in 2014. Oates was certified to be charged as an adult. Court records show he pleaded guilty in February 2016, received a suspended execution of sentence and was put on five years’ probation.

As to what led to Wednesday night’s fatal shooting, St. Louis County police Officer Benjamin Granda said. “We do not have any type of motive for the incident at this time.”

There were no police or MetroLink public safety officers on the train, though there were police officers and MetroLink officers nearby who were able to quickly respond, according to Granda and Metro spokeswoman Patti Beck.

UMSL’s chief of police, Forrest Van Ness, said students on the train saw what happened and called police. The students also pressed a mobile app on their phones that alerts campus police.

Van Ness said his campus officers arrived at the platform with county police and helped with the preliminary investigation. At the same time, a campus police employee sent the first of three campus alerts via text. Such messages are mandated by federal law.

Counseling is available for students who witnessed the shooting.

Crime on MetroLink has been an concern systemwide.

In the fall of 2016, there was a series of violent incidents: A security officer shot at the Wellston stop. A man shot in the face at the Swansea stop. A person shot in a suspected robbery at the East Riverfront station. A passenger attacked and robbed at the Delmar station.

And last month, a man was fatally shot as he stood on the Busch Stadium platform. Mac Payne, 57, was killed when a gun went off inside a train during an assault and robbery. A bullet passed through a window and struck Payne in the head.

A state law on the books since 1993, when MetroLink opened, bars Metro Transit from having its own police force. About 215 people provide security, including 38 county and eight city officers, as well as about a dozen St. Clair County Sheriff’s deputies, 120 security guards and 37 Metro public safety officers. The county was planning to go to 44.

Beck, the Metro spokeswoman, there aren’t police officers on every train, and there’s not a security guard at every platform, she said.

Beck said rider safety is the agency’s top priority, and it responded to the shooting at the Busch Stadium platform last month by adding patrols.

“Obviously, our public safety department is adding patrols and we are using all available resources,” she said. “We depend on our police partners to keep the transit-riding public safe on the system. We’re always looking for ways to make the system safer.”

A fatal shooting on MetroLink Wednesday night — the second on transit system property in just over two weeks — brings into sharp focus the need for security improvements to rid the system of persistent safety problems. Unfortunately, the public is losing confidence in Metro, partly because authorities refuse to release crime data and have rebuffed senior city and county officials’ demands for transparency and accountability. That's got to change.

Police say the man who has been charged was being escorted off of a bus when he began punching the officer.

Akila Jackson, 20, arrives at the Univerity of Missouri-St. Louis station near Natural Bridge Road on Thursday, April 6, 2017. A man was shot and killed April 5 on a MetroLink train at the station. Photo by Laurie Skrivan, lskrivan@post-dispatch.com 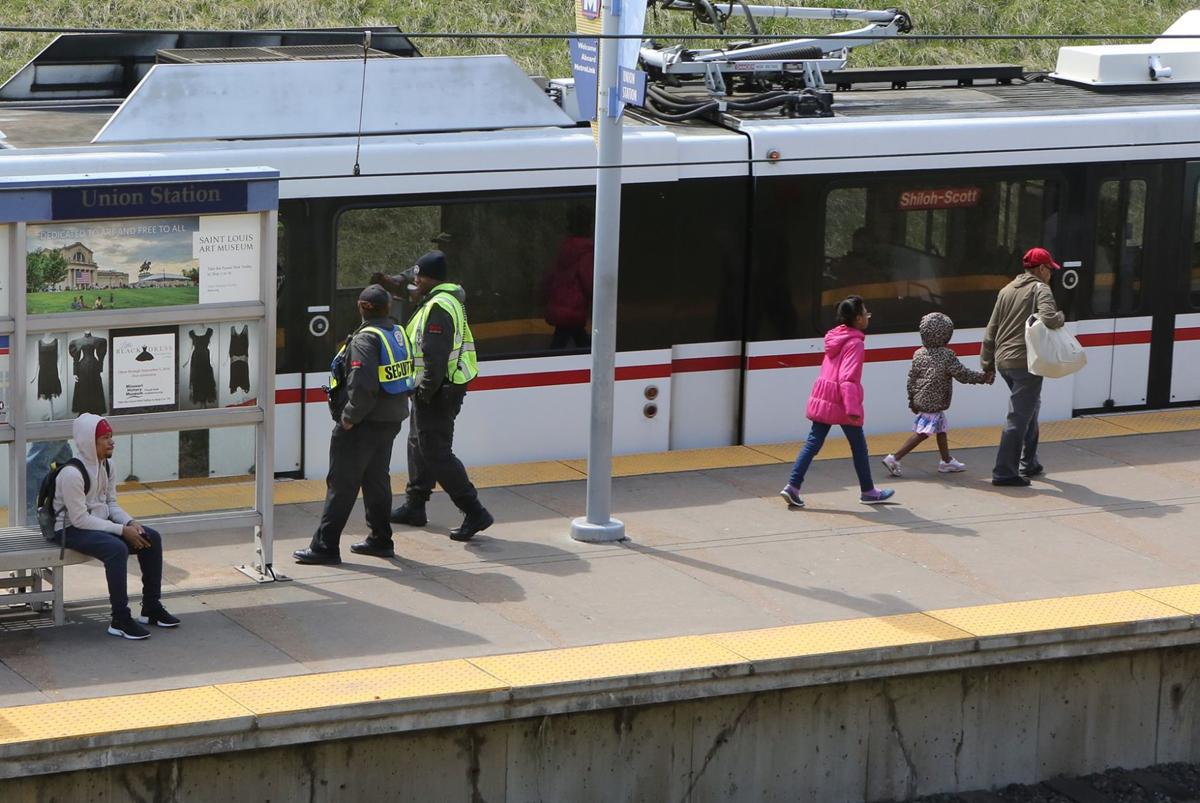 Security guards walk past a family boarding a train on Tuesday, March 21, 2017, at the MetroLink Station at 18th Street and Clark Avenue. Photo by J.B. Forbes, jforbes@post-dispatch.com 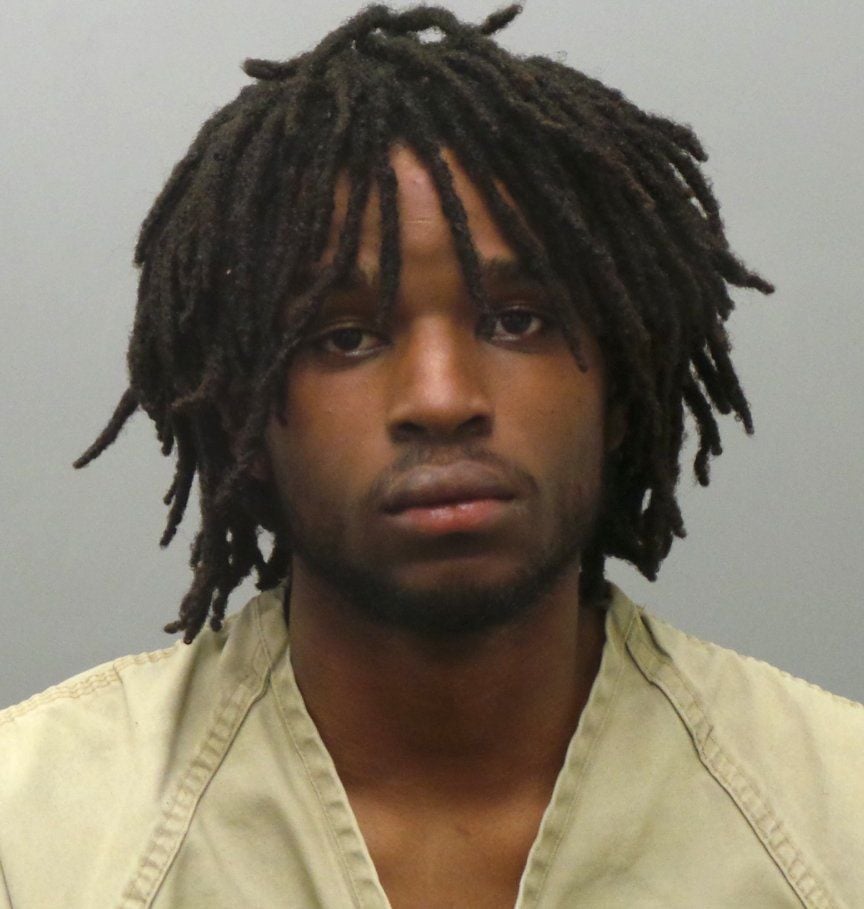 Djion Oates, of Berkeley, was sentenced to seven years in prison in the fatal shooting of a man on a MetroLink train near the UMSL South station on Wednesday, April 5, 2017. 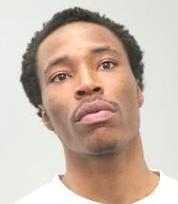 Jesse P. Boone, of St. Louis, pleaded guilty in October 2016 to a robbery on a MetroLink train the year before.