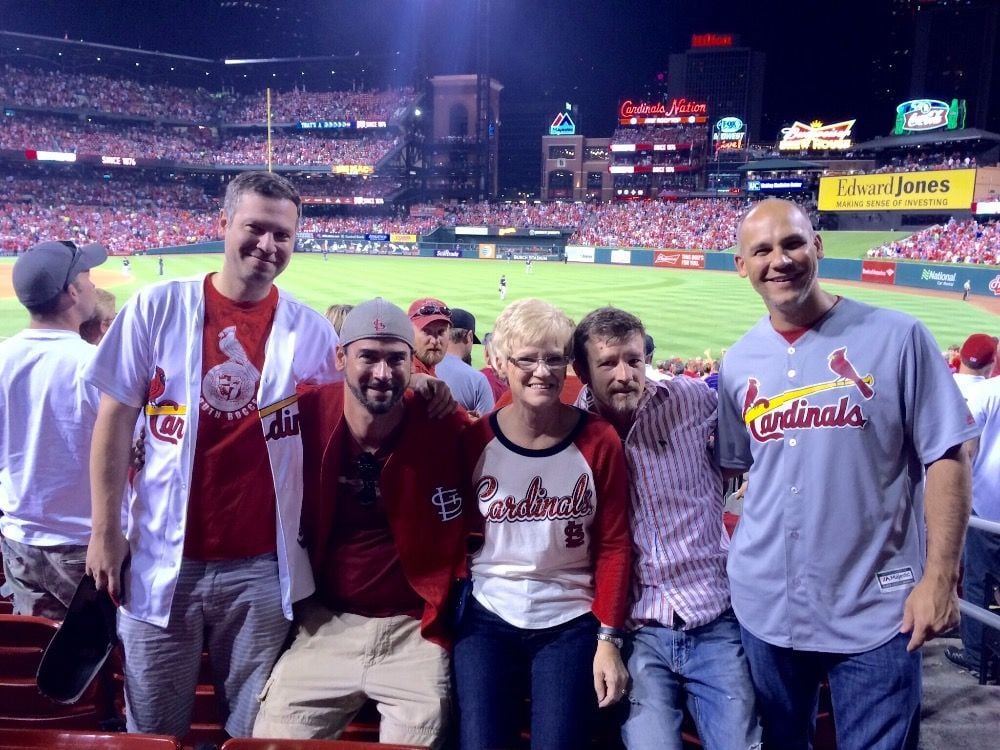 Chris Sanna, second from right, poses for a family photo with his mother and brothers at a Cardinals game on Friday, Sept. 25, 2015. He was shot during a robbery after leaving the game. Family photo. 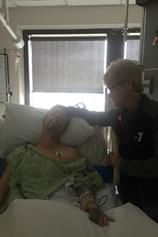 Family photo of Chris Sanna in the hospital after he was shot in St. Louis on Friday, Sept. 25, 2015. 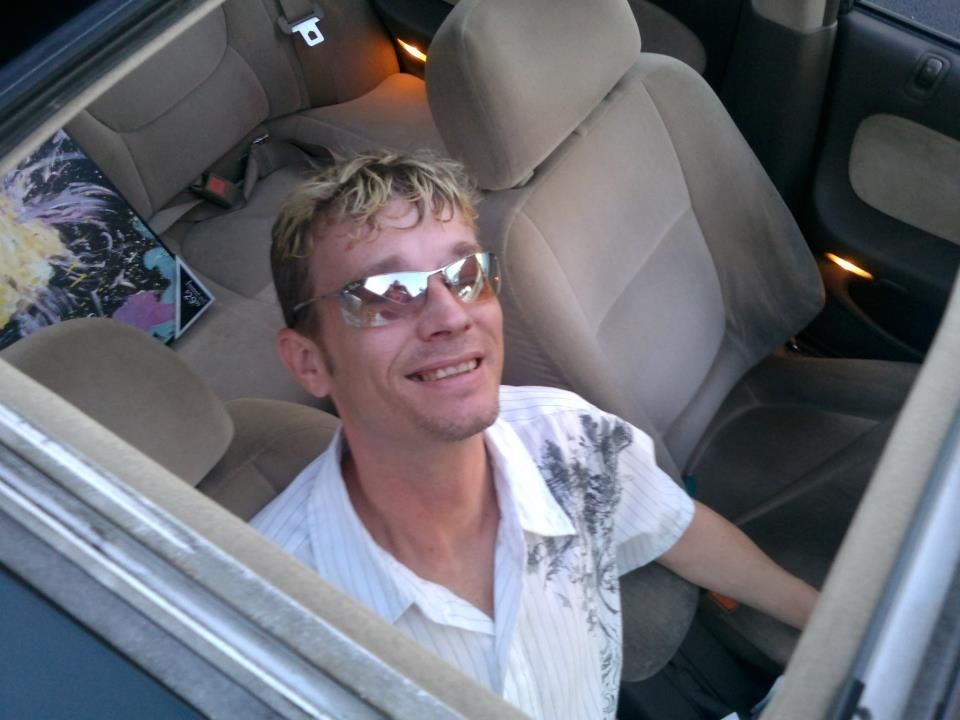 Chris Sanna, of House Springs, in an undated photo. 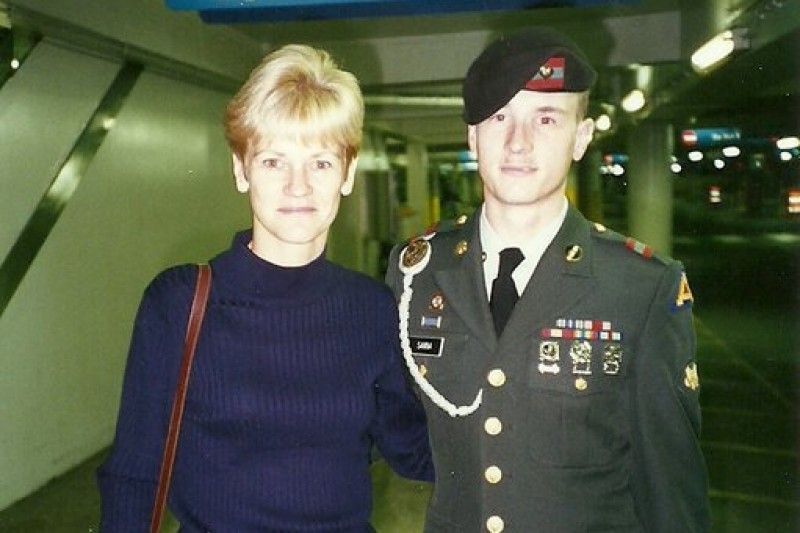 Chris Sanna stands with his mother Candis Sanna in a family photo from circa 1992. On Friday, Sept. 25, 2015, Chris Sanna was shot during a robbery after celebrating his mother's 60th birthday at a Cardinals game. Doctors say he may be paralyzed. Photo courtesy of the Sanna family

ST. LOUIS • A Cardinals fan shot and possibly paralyzed after he left Busch Stadium last weekend has police and the mayor promising to keep downtown safe as October baseball looms once again in St. Louis.

Christopher S. Sanna, 43, of House Springs, remained hospitalized Monday. Doctors told his family Sunday night that his spinal cord cannot be surgically repaired because of the damage from a bullet. They hold on to hope that his spine may recover to some degree on its own, though doctors say he will likely never walk again.

“They said it was shattered, and no surgery could repair it,” said his mother, Candis Sanna. “They said he could eventually get a little feeling back, but there was no hope for him to walk. It’s horrible.”

It is the latest robbery in St. Louis in which the victim was shot even after complying with a robber’s demands.

Christopher Sanna was shot about 10:30 p.m. Friday at Walnut Street and Memorial Drive. He and his siblings had been at the Cardinals game to celebrate his mother’s 60th birthday. Sanna and his girlfriend left the game at the start of the ninth inning Friday because he had to work Saturday morning. The rest of the family stayed for the game and to watch the postgame fireworks.

Christopher Sanna had parked at the Old Cathedral parking lot and was walking to his car. According to police, two men in a dark-colored sedan drove up to Sanna and his girlfriend. The driver got out with a gun and demanded their belongings. The woman gave the gunman her purse, and the couple turned to run away. That’s when the gunman fired several shots in their direction, hitting Sanna in the back.

“They turned to run away, but they didn’t make it very far,” Candis Sanna said. “As soon as they gave them the stuff, they were going to try to run away, but he shot them. They were within arm’s reach.”

St. Louis Police Chief Sam Dotson said Monday that detectives had little information to go on to catch the gunman. No video cameras caught the robbery. He said the description of the shooter is vague: a black man with long dreadlocks who was 5 feet 2 to 5 feet 5 with a stocky build. But Dotson said the shooting investigation is a priority for the department, adding that he has called the FBI for help.

After Christopher Sanna’s girlfriend called 911, he lay on the pavement and called his mother’s cellphone from the scene. It was so noisy from the fireworks that his mother didn’t pick up. “Mom, I’ve been shot,” he said on his mother’s voicemail.

Sanna has been on pain medication at the hospital but has been awake and able to share some of the details of what happened to him.

“People say, ‘Be aware of your surroundings.’ Well, he was very aware of his surroundings,” Candis Sanna said. “A car stopped at a red light, and the door flew open. Then they knew, this can’t be good. The guy ran up to him. It happened so fast.”

Christopher Sanna is a manager at an automotive store in south St. Louis County. He has an adult daughter. He served six years in the Army, stationed in Germany.

His relatives set up a fundraising site for help with his medical bills. By early Monday, they had raised about $5,000, a number that jumped into the tens of thousands by late afternoon as media reports of the shooting drew attention to the site.

Candis Sanna, who works near Union Station, said she’s aware of crime problems in the city. But she said she expects to be safe when coming and going from a baseball game.

“You think you’re safe after a Cardinals game, and you’d think there are police down there and you wouldn’t have to worry,” she said. “But there were no police there. I don’t know why. You get past Fourth Street and there was nobody around.”

She added: “It’s gotten really scary in the past year. And you can’t carry a gun to protect yourself because you can’t take it in the stadium.”

Police officers usually can be seen in the immediate vicinity of the stadium before and after games as they direct pedestrian and motor traffic. Beyond three or so blocks, a police presence is not as visible.

On Friday night, Dotson said, there were a dozen additional officers in the downtown area, and police were about two blocks away when Sanna was shot.

Dotson said the department plans to beef up its presence downtown going into the playoffs.

“So if there is a wild card game as early as next Wednesday, you will see additional officers in uniform around the ballpark and other parts of downtown,” Dotson said. “People have to feel safe when they come to a baseball game, and they are.”

Mayor Francis Slay said Monday he would give Dotson “unlimited overtime” to put more police on the streets. Slay reiterated his goal to hire more police officers, but he warned it might not be enough to combat what he called “a higher level of boldness” by criminals who are carrying more and higher-caliber weapons and who have little regard for consequences.

“We cannot have a cop on every corner at all times all over the city of St. Louis,” Slay said.

Dotson also said police are looking into similar robberies this month to see if there’s any connection. In several, robbers fired at victims even though they were complying with the robber’s demands. Three victims have been injured in three such shootings since the beginning of the month.

Philip Cook, a Duke University public policy and economics professor who has examined crime trends, said most gun robberies do not lead to violence but that perpetrators sometimes injure or kill to eliminate witnesses to a crime.

“And in some cases it may have been purely gratuitous violence — what I called recreational violence,” Cook said.

• About 11 p.m. on Sept. 9, two robbers approached two men walking in the city's Tower Grove South neighborhood. After the victims turned over backpacks and wallets, one of the robbers opened fire. One man was hit in the leg. The injured man was taken to a hospital, where police said he was stable.

• About 11 p.m. on Sept. 21, a man was robbed by two men as he sat in his car near the intersection of Virginia Avenue and Osage Street on the northern edge of Marquette Park. Police say the victim handed over money, but one of the robbers shot him. The victim was expected to survive.

• At about 5:45 p.m. on Thursday, a man robbed a woman and shot her in the leg in the 4200 block of Arsenal Street, near Tower Grove Park. She told police she was getting out of her vehicle and heading toward a home when a gunman approached her from behind, shot her in the leg and took her purse and cellphone.

Suspect in custody in shooting of Cardinals fan in downtown St. Louis

Chris Sanna, second from right, poses for a family photo with his mother and brothers at a Cardinals game on Friday, Sept. 25, 2015. He was shot during a robbery after leaving the game. Family photo.

Family photo of Chris Sanna in the hospital after he was shot in St. Louis on Friday, Sept. 25, 2015.

Chris Sanna, of House Springs, in an undated photo.

Chris Sanna stands with his mother Candis Sanna in a family photo from circa 1992. On Friday, Sept. 25, 2015, Chris Sanna was shot during a robbery after celebrating his mother's 60th birthday at a Cardinals game. Doctors say he may be paralyzed. Photo courtesy of the Sanna family