McCulloch looks back at 35 years as St. Louis County prosecutor, says 'Ferguson is the only reason I'm retiring'
0 comments
Share this
{{featured_button_text}}
1 of 6 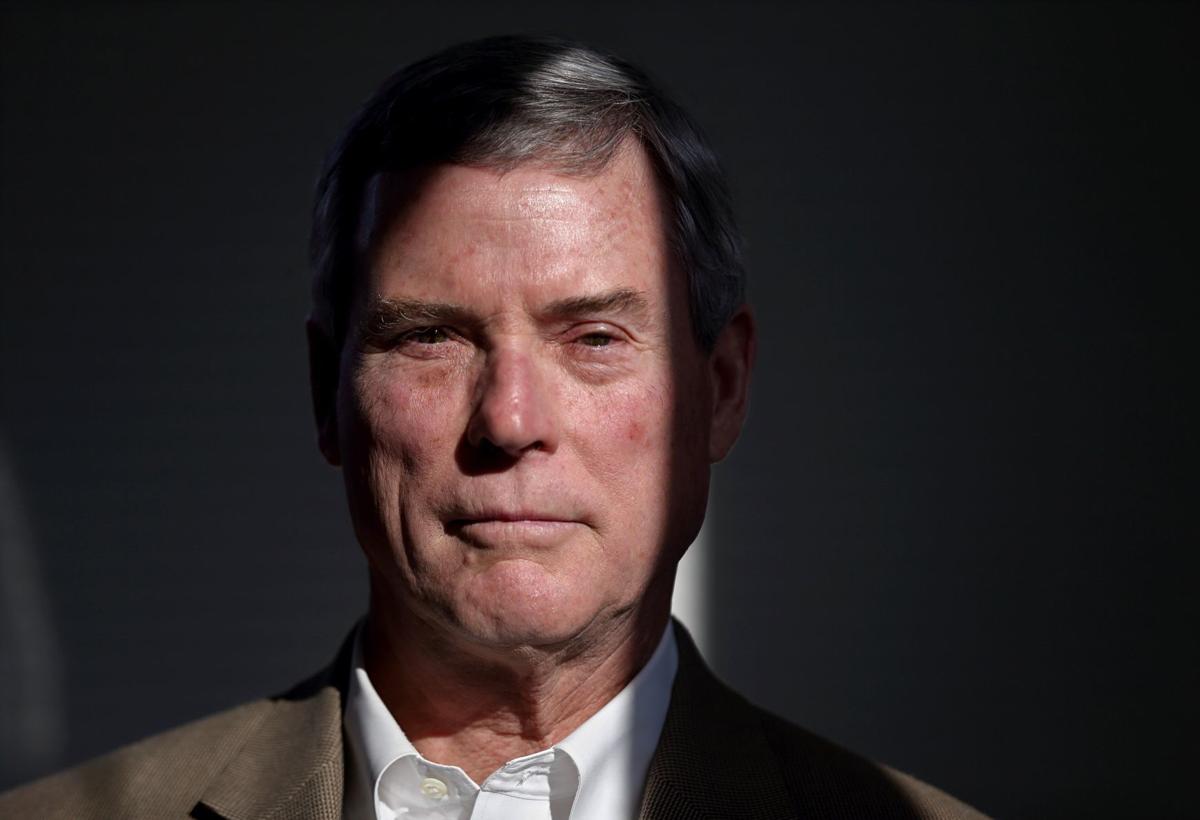 Robert P. McCulloch, 67, photographed in his Clayton office on Wednesday, Dec. 19, 2018. McCulloch was first elected as prosecuting attorney for St. Louis County in 1991. McCulloch's 28-year run as prosecutor will end when Wesley Bell is sworn into office in 2019. Photo by David Carson, dcarson@post-dispatch.com 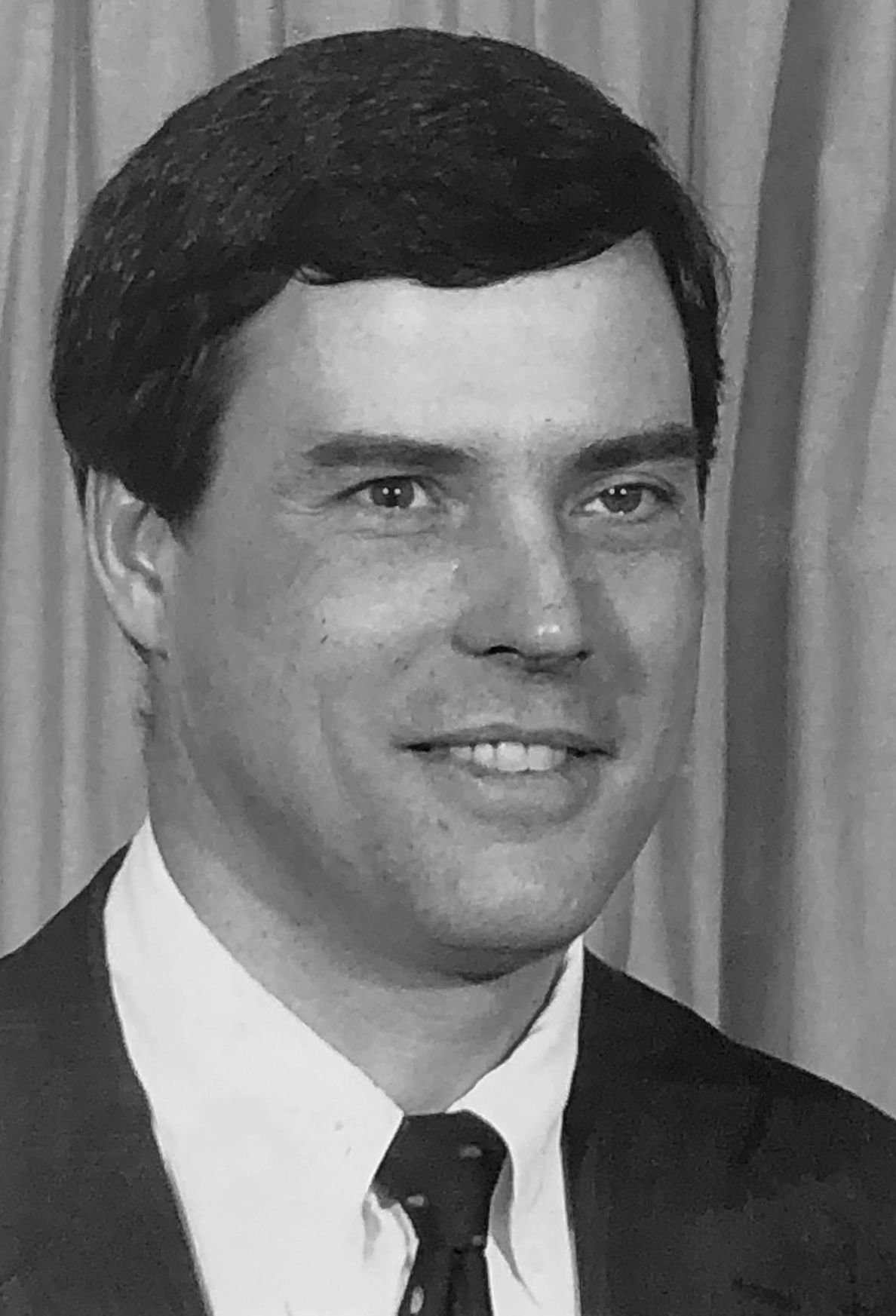 Robert P. McCulloch in a campaign photo from 1990. 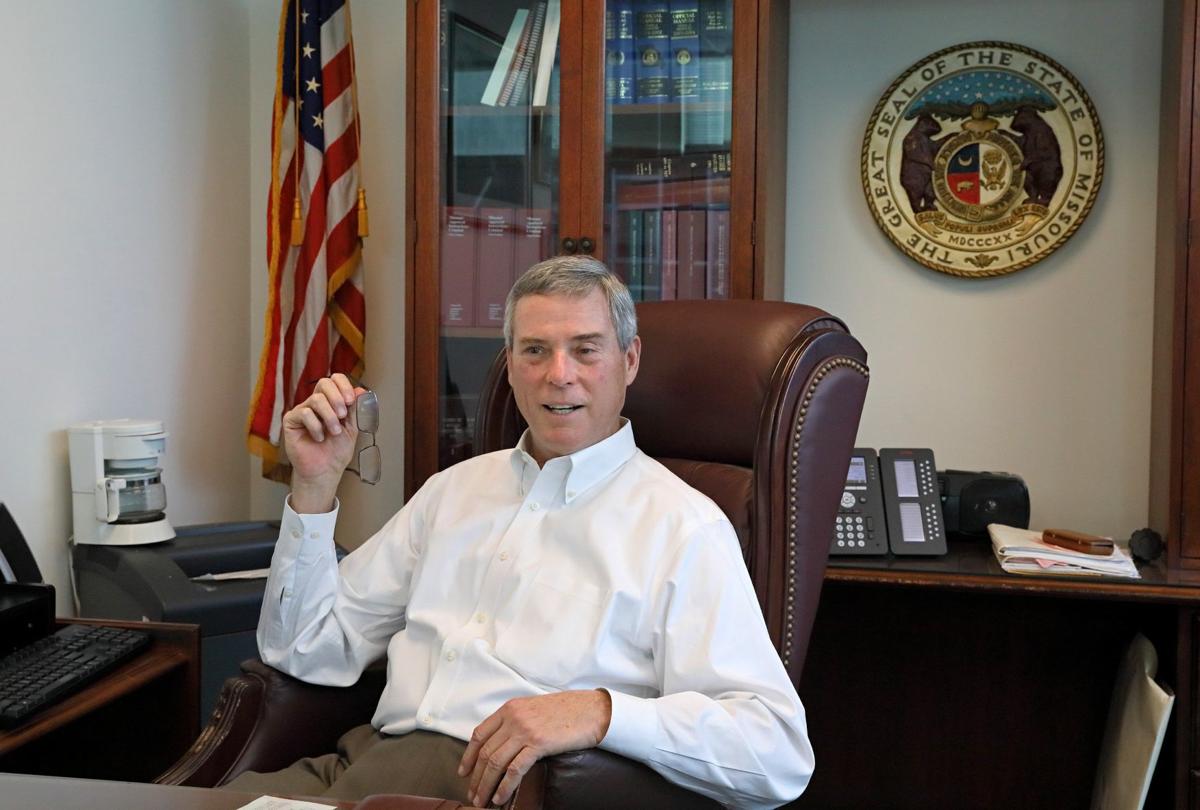 Bob McCulloch talks with his spokesman Ed Magee at his office in Clayton on Wednesday, Dec. 19, 2018. Photo by David Carson, dcarson@post-dispatch.com 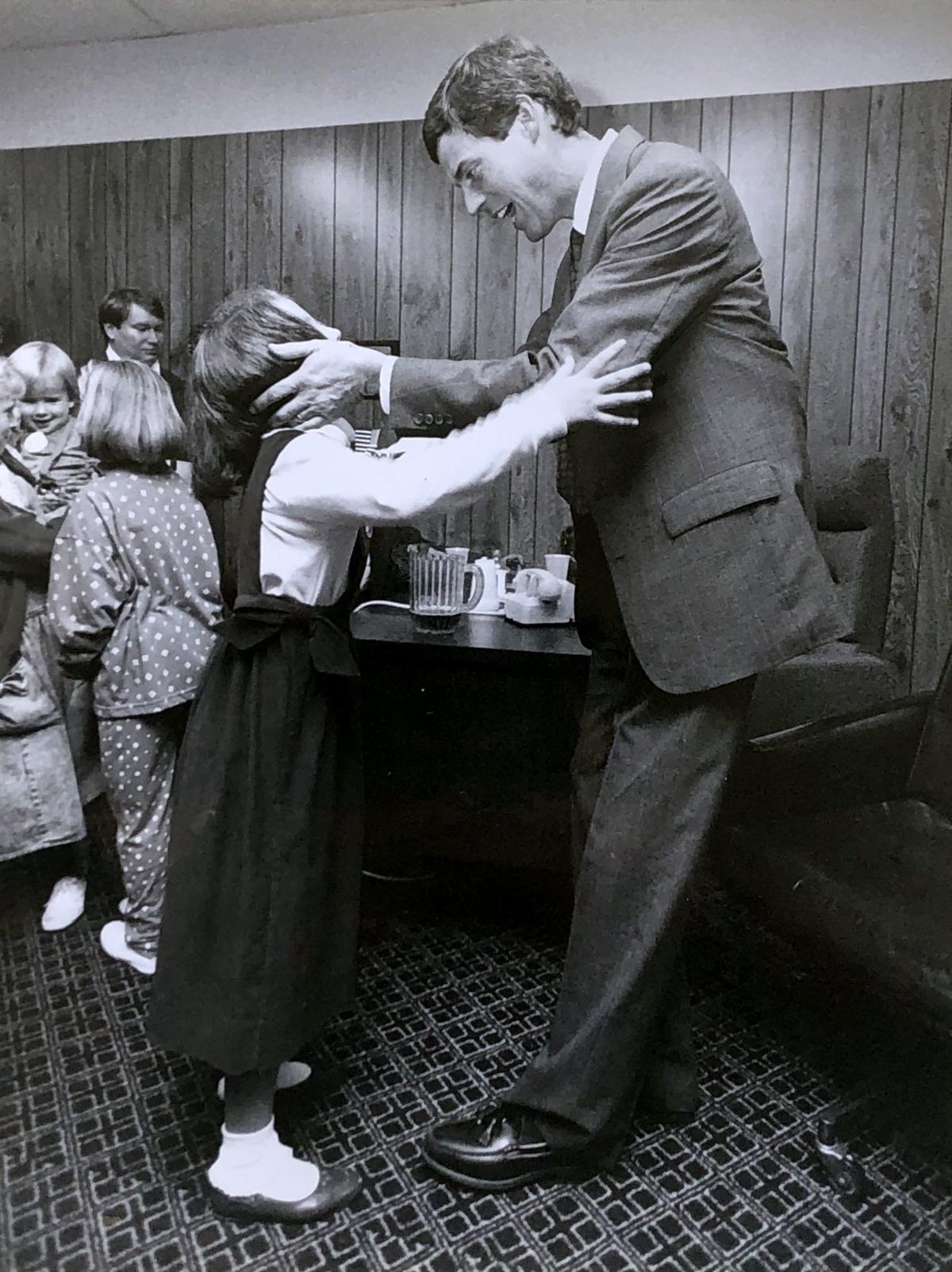 Robert P. McCulloch, who was elected St. Louis County prosecuting attorney, sharing the victory with his daughter Elizabeth, 8, just before giving his victory speech the first time he was elected on Tuesday, Nov. 6, 1990. Photo by Jerry Naunheim Jr./St. Louis Post-Dispatch 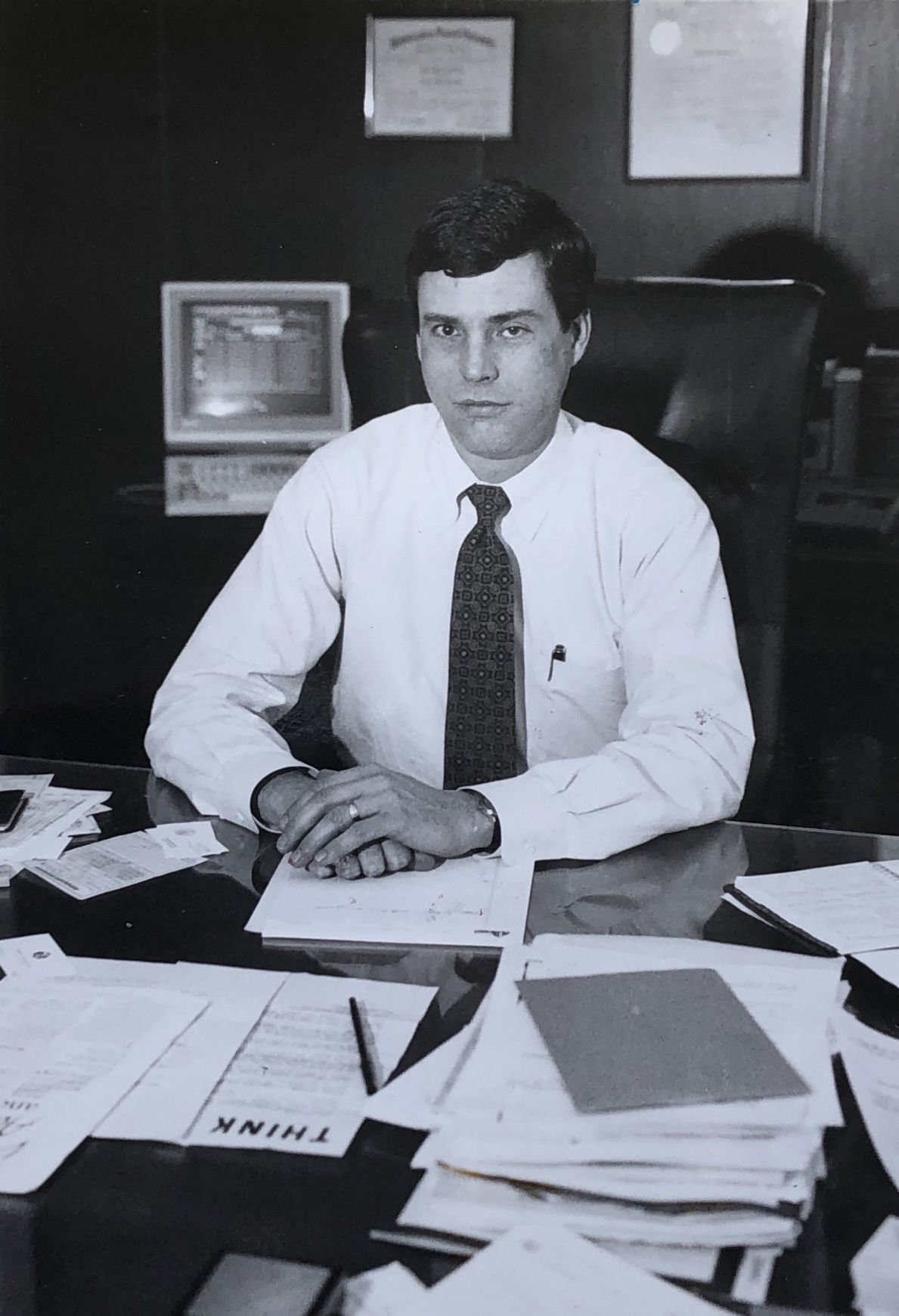 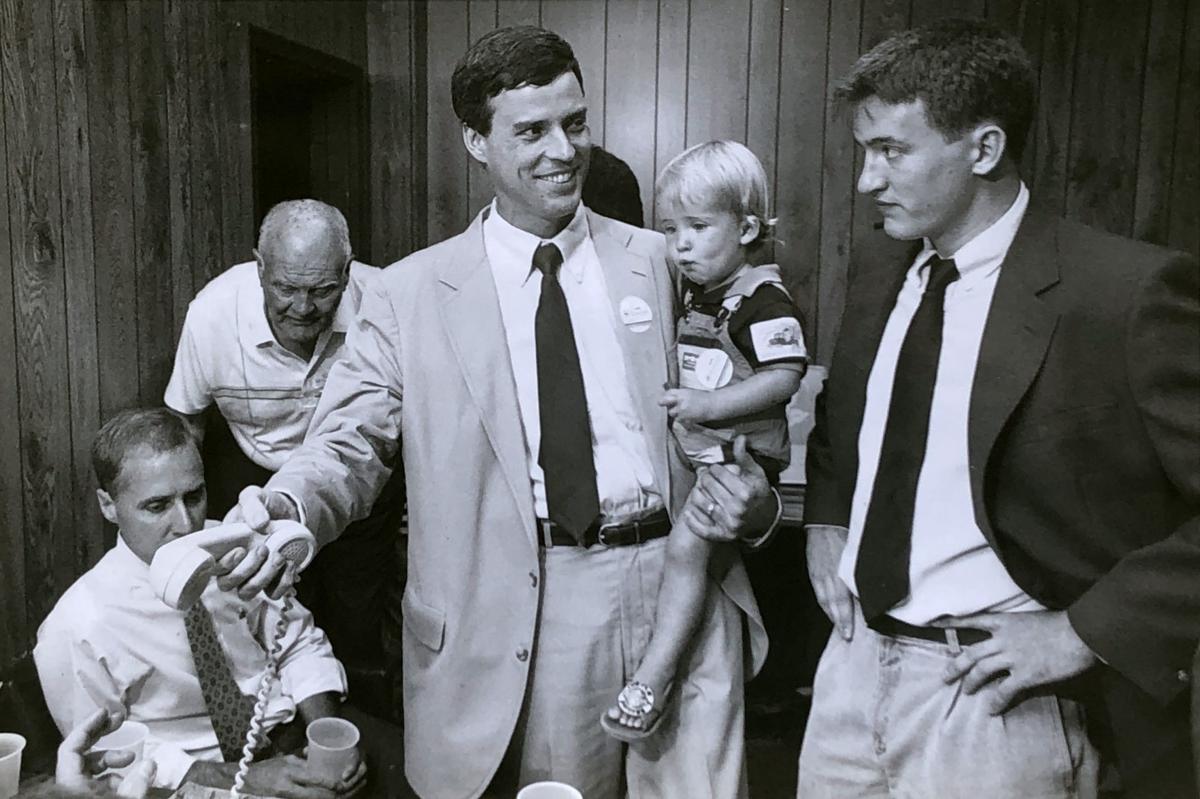 CLAYTON • Robert McCulloch says he has no regrets from his 28 years as St. Louis County’s elected prosecutor — in particular how he led the 2014 grand jury investigation of a Ferguson patrol officer’s on-duty killing of 18-year-old Michael Brown.

McCulloch, who leaves office New Year’s Eve after seven straight terms, blames the Ferguson protests for his defeat in the August Democratic primary. He lost to then-Ferguson Councilman Wesley Bell who ran on a pledge to “fundamentally change the culture” of the county prosecutor’s office.

“Ferguson is the only reason I’m retiring on Dec. 31,” McCulloch told the Post-Dispatch. “I’ve been getting beaten down on Ferguson for four years.”

McCulloch, in a sweeping two-hour interview with the Post-Dispatch, touted various highlights over his 35-year career as a prosecutor in St. Louis County, including developing drug and mental health courts, creating a team of victims advocates and building “a truly, highly professional, well-trained office.”

He cited his work on the “truth-in-sentencing law,” requiring people convicted of violent crimes to serve at least 85 percent of their sentence before coming up for parole, establishing a sex crimes unit in the prosecutor’s office and making the office a place where assistant prosecutors could earn enough money to enable them to make the job their career.

During the interview, he also sought to squash what he considers common misconceptions about him as he prepares to leave the job he has held for nearly half his life.

“You will never find a case in this country involving a fatal police shooting that was more thoroughly vetted than that case,” McCulloch said of the Brown killing. “You’ll never find one more thoroughly and transparently done ... and yet there’s a perception out there among a lot of people who voted against me that somehow we hid it and tanked it.”

At 67, McCulloch is returning to private life with nebulous plans to open a small law office to attract part-time consulting work or jobs as a special prosecutor. But he’ll mostly be retired, he said, collecting state and county pensions that, combined, will pay him more than $100,000 a year.

McCulloch, one of Missouri’s longest-serving elected officials, lost the race to someone whose campaign platform he says relied on “empty” rhetoric and “bogus” claims about his administration. He said he is worried his successor has focused more on the rights of defendants over crime victims.

“There’s nothing that they’ve been talking about that we haven’t been doing for years,” he said of Bell’s campaign and the ACLU. The ACLU spent more than $250,000 on political ads, polling and messaging to support criminal justice reform.

Specifically, McCulloch rejects his critics’ claims that his administration, for years, has pursued cash bail on misdemeanors to hold poor people behind bars.

“I’m most worried about anything that will have a negative impact on public safety,” McCulloch said. “Some people have to stay in jail until their cases resolve. Some should be given treatment. Some people should never, ever get out of prison once they go.”

McCulloch labeled claims of mass incarceration of low-level offenders as myths popularized in the press; he dismissed notions that his office has pursued prison for minor drug crimes and says his office has been at the forefront of developing alternative courts for drug offenders, people with mental illness and veterans.

“You find me the kid who got picked up with a bag of weed in his pocket who’s in the penitentiary, and I will go get him out,” he said. “He does not exist.”

Political observers say McCulloch lost his bid for re-election because he failed to overhaul his tough-on-crime reputation born of the 1990s. As St. Louis County became more diverse in recent years, McCulloch’s message lost resonance, particularly among African-Americans after the Ferguson protests.

“This is part of a wave, really, in other cities in this country, sparked and probably accelerated by the attention Ferguson drew to some of the problems” of unfair police practices and predatory municipal courts, said Dave Robertson, a political science professor at the University of Missouri-St. Louis. “McCulloch’s agenda didn’t change to adjust to new problems and especially new ways of looking at and understanding problems.”

The notion that McCulloch’s administration failed to evolve isn’t a surprise to some, given his deep family ties to law enforcement. McCulloch is keenly aware of criticism that he has maintained a cozy alliance with law enforcement for decades, but he contends his office has charged at least 50 police officers with serious crimes over the years.

“McCulloch’s regime was viewed as racist, corrupt and seemingly immune to introspection and reform,” said Donnell “Malik” Sims, an activist with the St. Louis-based Organization for Black Struggle. Sims says Bell’s ascendancy “is a mandate of the people who want change.”

Bell, 44, takes over on Jan. 1 with little prosecutorial experience. During the campaign, he countered criticism of scant experience by touting his varied roles as college law professor, municipal judge, prosecutor and public defender.

“We’re going to set a tone of collaboration,” Bell said. “I think it’s incumbent upon us to work together because our region is very fractured.”

McCulloch says he hopes Bell succeeds, saying he’ll have to adapt quickly to the realities of pursuing an aggressive reform agenda with limited resources.

Residents, clergy gather at church forum looking for answers in shooting of Michael Brown in Ferguson

Stenger watch party in Clayton ready for a celebration

Prosecutor: Man held in wounding of two officers at Ferguson may have been shooting at someone else

Some of McCulloch's high profile cases

2003: Richard Strong sentenced to death for fatally stabbing Eva Washington, 23, and Zandria Thomas, 2 with a butcher knife in Edmundson in 2000.

2007: Kevin Johnson convicted of first-degree murder and sentenced to death in the 2005 fatal shooting of Kirkwood police Sgt. William McEntee.

2014: His final trial, McCulloch wins a conviction against Brian Cannon in the 2012 shooting that paralyzed Florissant police Officer Michael Vernon.

Robert P. McCulloch, 67, photographed in his Clayton office on Wednesday, Dec. 19, 2018. McCulloch was first elected as prosecuting attorney for St. Louis County in 1991. McCulloch's 28-year run as prosecutor will end when Wesley Bell is sworn into office in 2019. Photo by David Carson, dcarson@post-dispatch.com

Robert P. McCulloch in a campaign photo from 1990. 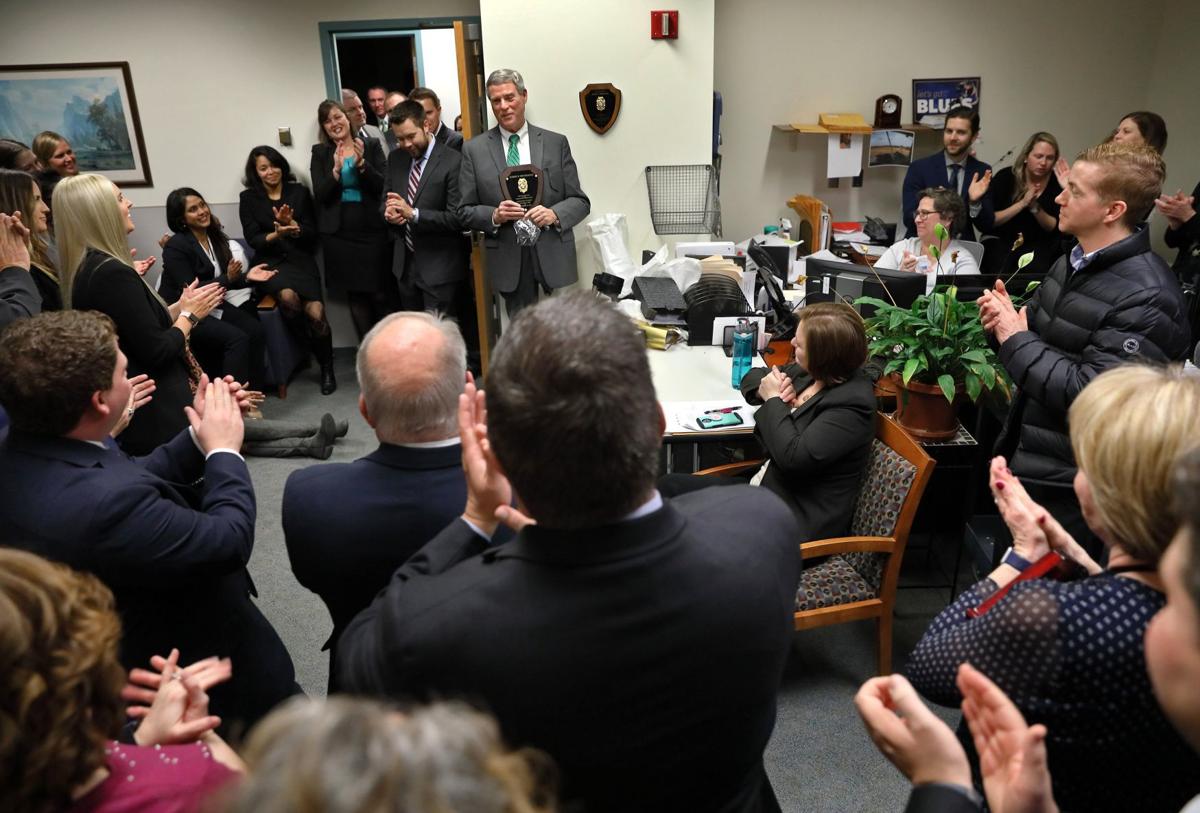 St. Louis County prosecuting attorney Robert P. McCulloch gets a round of applause from a room packed full of his staff during this last ever meeting with them on Thursday, Dec. 20, 2018. The staff meeting is an annual event where McCulloch thanks them for their hard work and hands out awards. At the start of the meeting the staff presented him with a watch to honor his 28 years of service. Photo by David Carson, dcarson@post-dispatch.com

Bob McCulloch talks with his spokesman Ed Magee at his office in Clayton on Wednesday, Dec. 19, 2018. Photo by David Carson, dcarson@post-dispatch.com

Robert P. McCulloch, who was elected St. Louis County prosecuting attorney, sharing the victory with his daughter Elizabeth, 8, just before giving his victory speech the first time he was elected on Tuesday, Nov. 6, 1990. Photo by Jerry Naunheim Jr./St. Louis Post-Dispatch 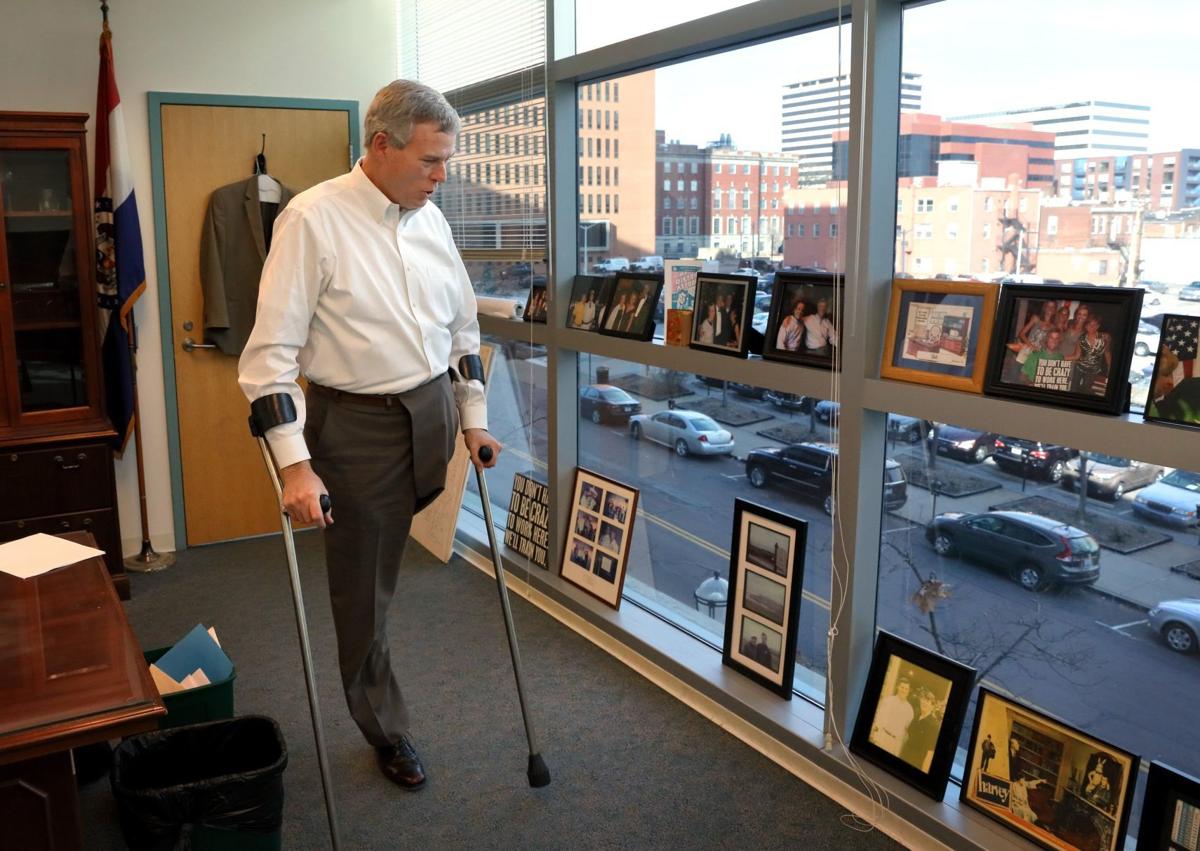 Bob McCulloch moves past a collection of photos he has displayed in his office on Wednesday, Dec. 19, 2018. McCulloch's office is decorated with many photos of him with various political figures, memorabilia and awards from his 28-year career as prosecuting attorney for St. Louis County. McCulloch, who as a teenager lost a leg to cancer, often wore a prosthetic leg in public. Photo by David Carson, dcarson@post-dispatch.com