CHAMPAIGN, Ill. — Zane Ziegler, a retired Champaign police officer, was curious last month when a fellow exhibitor at a police memorabilia show said that he had a vintage badge from the department.

When Ziegler saw the star emblazoned with the number 80, “I about fell over,” he said.

The badge had belonged to Robert Tatman, a Champaign officer killed on duty with his own service revolver on Nov. 25, 1967. The case remains unsolved, and for 54 years, so was the question of where his badge went.

Ziegler bought the star from the other vendor at the National Police Collector’s Show in St. Charles, and has reclaimed it for Champaign, where he was an officer from 1975 to 2003 and remains the department’s historian. 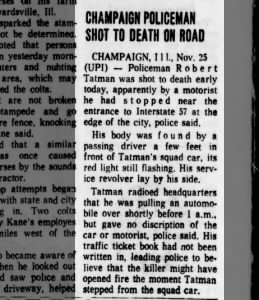 “I had no idea it was out there. Nobody did. It wasn’t on our radar,” Ziegler said.

He declined to say how much he paid, but acknowledged it was more than the $355 he shelled out in a 2012 eBay transaction. That’s when he obtained another Champaign police gem, the No. 7 badge of Thomas Dodsworth, killed in the line of duty July 6, 1913 in a shootout with a bootlegger.

Ziegler doesn’t know how either Dodsworth’s or Tatmun’s badges left the police community, but rules regarding disposal of equipment have changed over the years.

Tatman was married and had four children. Ziegler is in contact with the slain officer’s youngest son, Dan, who lives in the Indianapolis area.

Ziegler offered to give the badge to the younger Tatman, but “he said he would rather it stay here with us.”

Temporarily, Tatman’s star is on display in the police department’s briefing room, named for Christopher Oberheim, a 44-year-old, 13-year Champaign police veteran fatally shot May 19 when he and another officer responded to a domestic disturbance.

Jonathan Cobb, 33, was shot in the head while driving the 3811 bus on Lucas and Hunt Road Friday evening. He remains in critical condition.