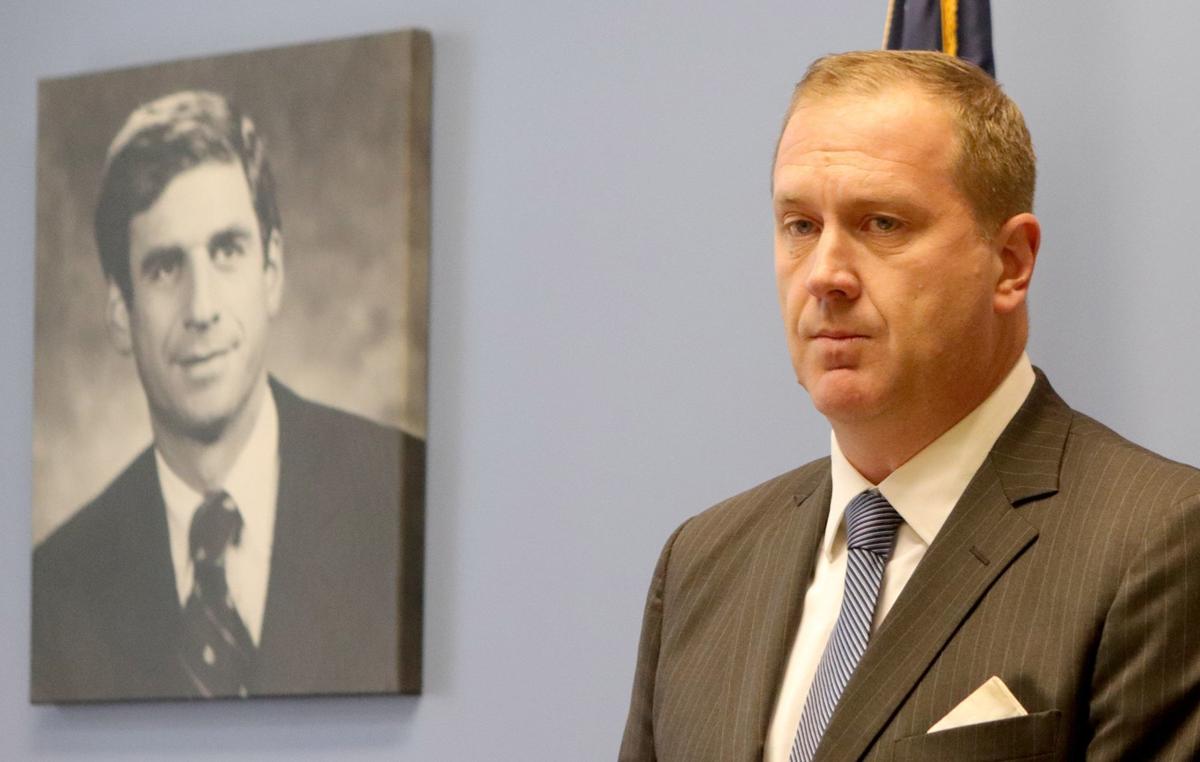 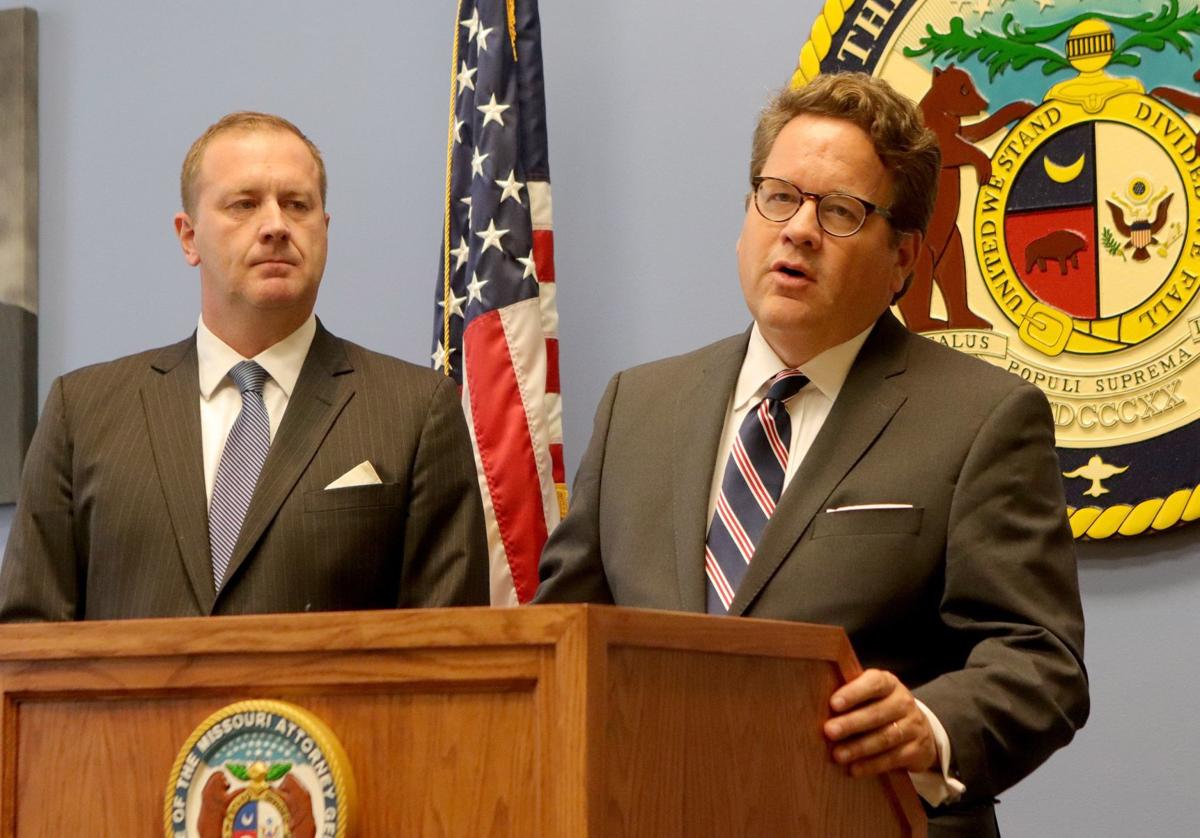 First assistant to Missouri Attorney General Thomas Albus, right, speaks to the press, Friday, Sept. 13, 2019, to announce the findings of the investigation into allegations of sexual abuse by clergy members in the Roman Catholic Church. At left is Missouri Attorney General Eric Schmitt, whose office will refer 12 former clergy members for potential criminal prosecution. Photo by Hillary Levin, hlevin@post-dispatch.com 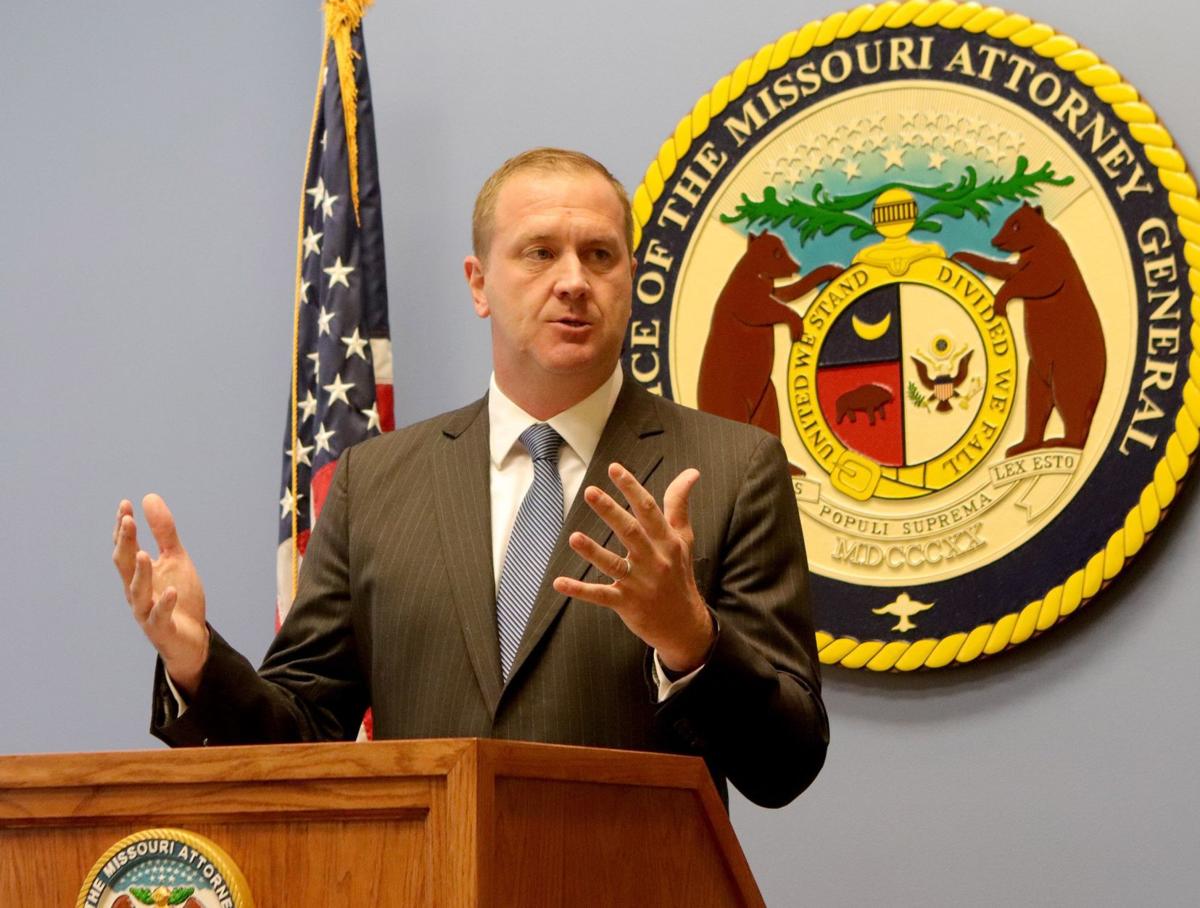 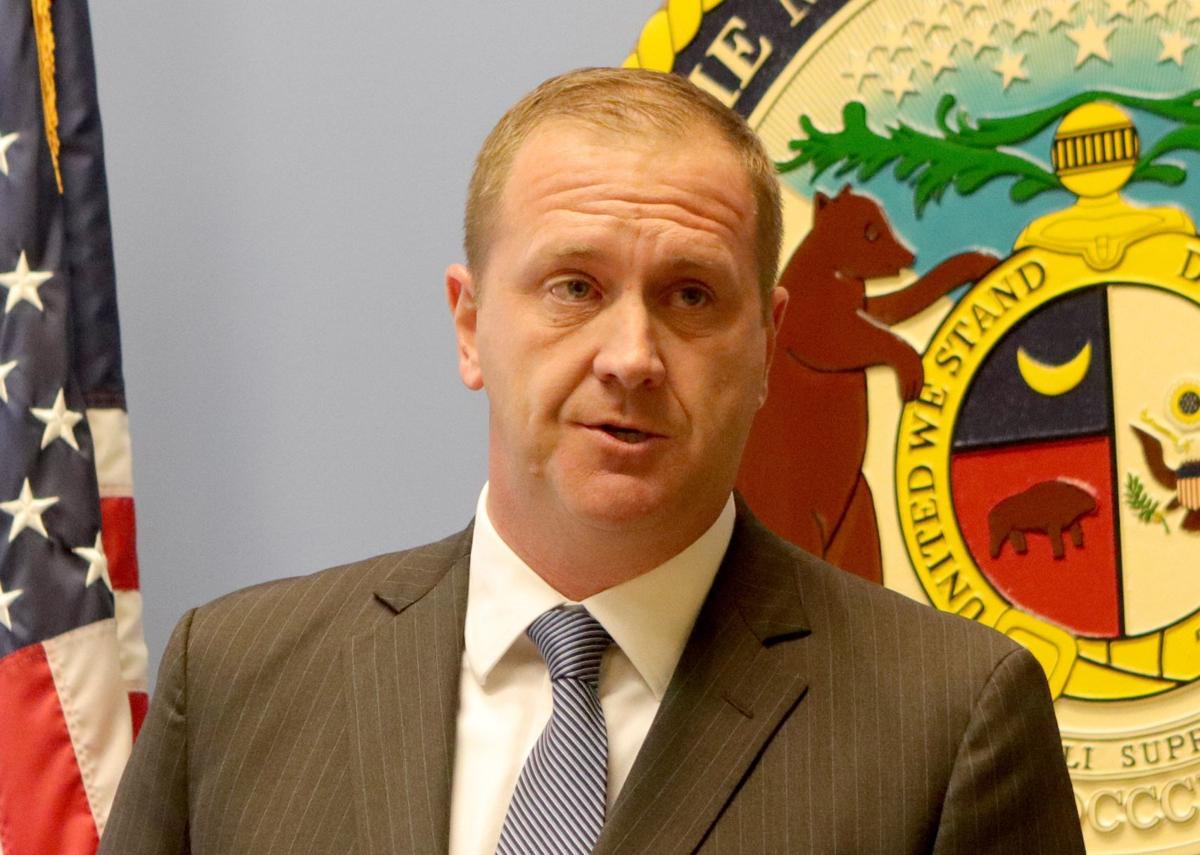 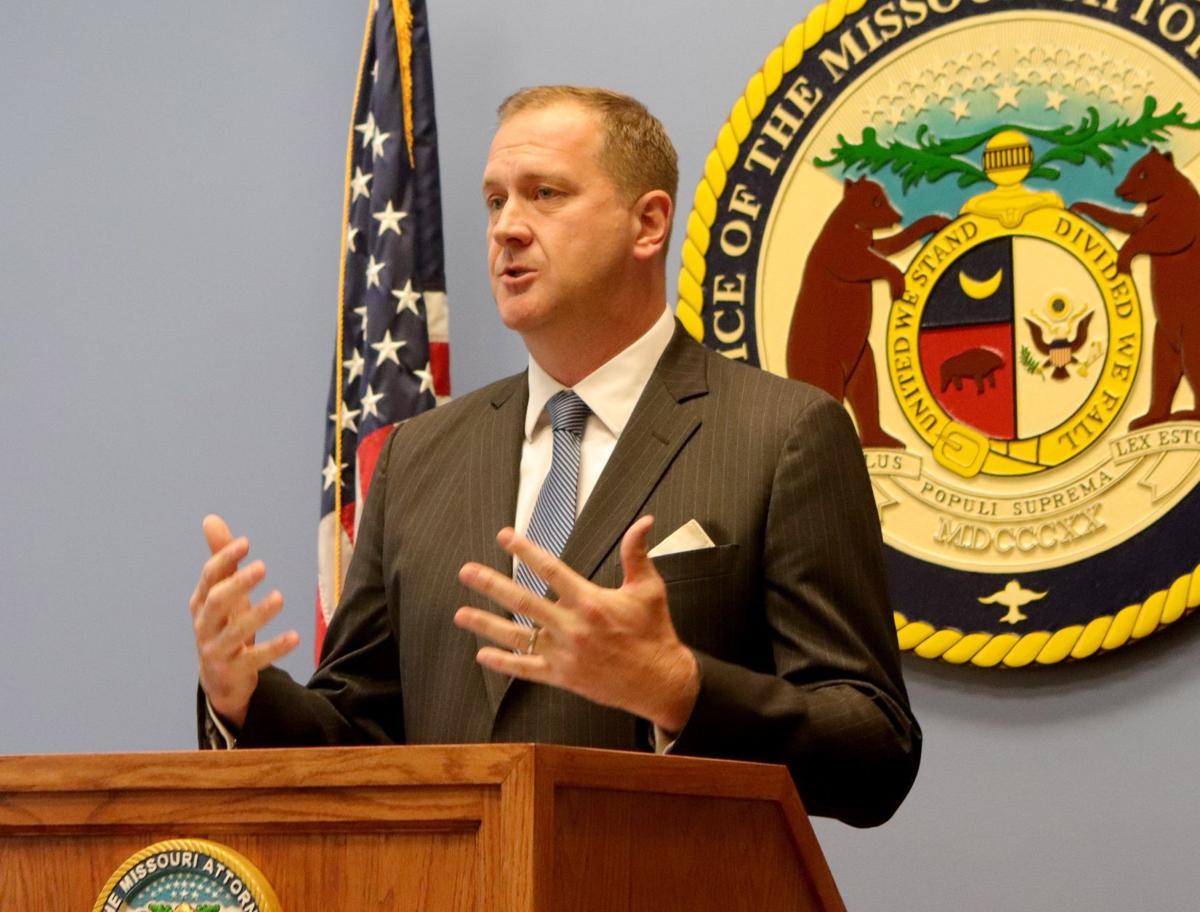 Schmitt, who outlined the findings at a news conference in downtown St. Louis, said his office’s review of church personnel records, dating to 1945, uncovered 163 cases of abuse involving Roman Catholic clergy in Missouri.

It also found church officials refused to acknowledge reports of abuse or misconduct, and they reassigned accused priests without informing law enforcement or parishioners.

“I can tell you as a father of children and a lifelong member of the Catholic Church, my heart absolutely breaks for the victims of this widespread abuse and cover-up from the very people we’ve entrusted with our spiritual lives,” he said.

Several clergy in the report are being identified as alleged abusers for the first time, Schmitt said.

Of the 163 clergy identified in the 329-page report, 83 are dead. Forty-six of the remaining 80 could not be prosecuted because of the statute of limitations, Schmitt said. One case is still under open investigation.

The report does not name the clergy, and narratives and details about them are slim. Schmitt said there were legal limitations to what his office could release, but that the report still included “more information about cases than have ever been released publicly.”

The report includes short synopses describing the 12 former clergy members who will be “referred for potential criminal prosecution.”

According to one, a priest who admitted in 1996 to abusing and molesting a high school-aged seminarian was removed from ministry in 2002 and apparently allowed to retire one year later and relocate outside of the United States. In 2004, additional reports of molestation of young seminarians were determined to be credible by church officials. In 2011, a bishop in Ireland who’d requested the accused priest’s history was told by a Missouri diocese only that he was removed from active ministry.

In another case, the priest was suspended from ministry from 1982 to 1984 because of numerous allegations of sexual abuse of minors. The priest returned to active ministry but with restrictions from interacting with youth. After 2002, more sexual misconduct was alleged from his work at a diocesan high school from 1968-73. He was removed from the priesthood in 2006.

A spokesman for the attorney general said the agency will send out criminal prosecution referrals to prosecutors around the state in the next 30 days.

The report comes little more than a year after Schmitt’s predecessor, U.S. Sen. Josh Hawley, announced his office would review records from all four Catholic Church dioceses in Missouri in the wake of a Pennsylvania grand jury report in August that detailed abuse of more than 1,000 people by hundreds of priests in the state.

Each Missouri diocese has published its own lists of clergy credibly accused of sexual abuse of a minor. The Archdiocese of St. Louis has named 63 clergy with substantiated allegations of sexual abuse of a minor, and three who possessed child pornography. Twenty-six clergy identified in the list had never been publicly reported to have been accused of abuse, according to a Post-Dispatch review.

Asked whether his report included clergy who were not named in the diocesan lists, Schmitt said: “What I can say is that there are several instances noted here that have not previously been public.”

Schmitt also said investigators did not recommend charges against higher ranking church officials who contributed to covering up allegations of abuse because that was not the focus of their review.

In a statement, the Archdiocese of St. Louis said Friday it cooperated in “full transparency” with Schmitt’s investigation and urged anyone with knowledge of sexual abuse of a minor by clergy to contact local and state authorities.

“In August of 2018, when I invited the Attorney General’s office to investigate all allegations of sexual abuse of a minor, we promised full cooperation and unfettered access to archdiocesan records,” Archbishop Robert Carlson said. “Following that investigation and today’s report, the Archdiocese of St. Louis remains committed to working with authorities, to bringing healing to victims and their families, and to ensuring a safe environment for all of our children.”

But advocates for people who were sexually abused by clergy said they doubted Catholic officials were fully transparent when they provided records to Schmitt’s office.

“I don’t know how he can call it an investigation when he expected wrongdoers to turn over archives they’ve kept secret for so long,” said Judy Jones, 75, outside Schmitt’s office in St. Louis shortly after the report was released.

Jones, the Midwest director for the Survivors’ Network of Those Abused by Priests, said investigators should also have referred to prosecutors cases where church officials kept secret the allegations of abuse.

“That’s the only way kids will be protected, is if people who did the cover-ups are held accountable,” she said.

Even before Schmitt’s report was released, David Clohessy, a clergy abuse survivor and longtime SNAP leader, criticized the state’s investigation as a “whitewash” because Hawley and Schmitt had said the attorney general’s office lacked criminal jurisdiction, which would give it the ability to issue subpoenas and convene a grand jury.

But Schmitt said Friday that his office issued administrative subpoenas for the records and had church officials sign “affidavits confirming the completeness of the records that were being provided.”

Investigators reviewed “every available personnel record” of every priest serving in the four dioceses in Missouri, dating back nearly 75 years, Schmitt said. The review included more than 2,000 priests and 300 deacons, seminarians and religious women, he said.

The report — the first examination of Missouri church records by an organization outside of the Roman Catholic Church — was not reviewed by anyone outside his office before its release, Schmitt said.

“We took this in a very deliberate and serious way,” Schmitt said. “We were dealing with this from our office at the highest level. It deserves that kind of attention, and we think the report is substantive.”

“There is a lot of great work done by victims’ advocates all across the country, and I don’t judge how victims respond,” he said. “Victims have a right to be angry at how this has been covered up.”

Schmitt’s report did not include records from religious orders like The Marianists or Jesuits, though it included personnel files of some religious order clerics who performed work sanctioned by the dioceses, he said. His office does not have plans to conduct a similar review of order records, but it will keep open a hotline to report clergy, he said.

“We imagine this report will generate new inquiries,” he said.

Clohessy said Friday that he doubts church officials were fully transparent, that Schmitt’s investigators did not interview several known survivors of abuse and attorneys who have represented them in dozens of court cases, and that his probe should have included Catholic orders.

“There is a lot more still being hidden and a lot more Schmitt can and should do to expose it,” he said.

Schmitt also released a list of recommendations to the Roman Catholic Church to “ensure that our most vulnerable are protected moving forward.” They include ensuring independent review boards are “composed entirely of lay people” and immediately publicizing when an accused priest is dismissed from clerical state.

Schmitt said he hoped the report could “change the trajectory of the future.”

“They can lead to people being brought to justice,” he said. “And hopefully, make sure that this never happens again.”

Jesse Bogan contributed to this report.

Missouri Attorney General Eric Schmitt also released a list of five recommendations to the four Roman Catholic dioceses in Missouri to “ensure that our most vulnerable are protected moving forward.” He recommended:

• The church “assume greater responsibility and oversight over all religious order priests and priests visiting or relating from other dioceses to subject them to the same procedures and oversight with regard to youth protection and clergy abuse as if there were diocesan priests.”

• That independent review boards set up by dioceses be “composed entirely of lay people.”

• The dioceses should review all past claims and subject them to careful scrutiny, and “not wait for victims who made the effort before 2002 to present reports of abuse.”

• That decisions by independent review boards to seek laicization of clergy — dismissing them from the clerical state — “should be publicly disclosed without delay.”

• “A robust program on notification and supervision of priests removed from public ministry or from the clerical state should be undertaken.”

Schmitt said he hoped the report could “change the trajectory of the future.”

“They can lead to people being brought to justice,” he said. “And hopefully, make sure that this never happens again.”

ST. LOUIS — The Archdiocese of St. Louis can’t estimate how much it has paid so far to people alleging sex abuse by clergy because records goi…

Catholic officials named them as abusers. Now these former St. Louis clergy must face their pasts.

Confronted publicly for the first time, some admit they crossed the line. Others insist the Archdiocese of St. Louis got it wrong.

First assistant to Missouri Attorney General Thomas Albus, right, speaks to the press, Friday, Sept. 13, 2019, to announce the findings of the investigation into allegations of sexual abuse by clergy members in the Roman Catholic Church. At left is Missouri Attorney General Eric Schmitt, whose office will refer 12 former clergy members for potential criminal prosecution. Photo by Hillary Levin, hlevin@post-dispatch.com 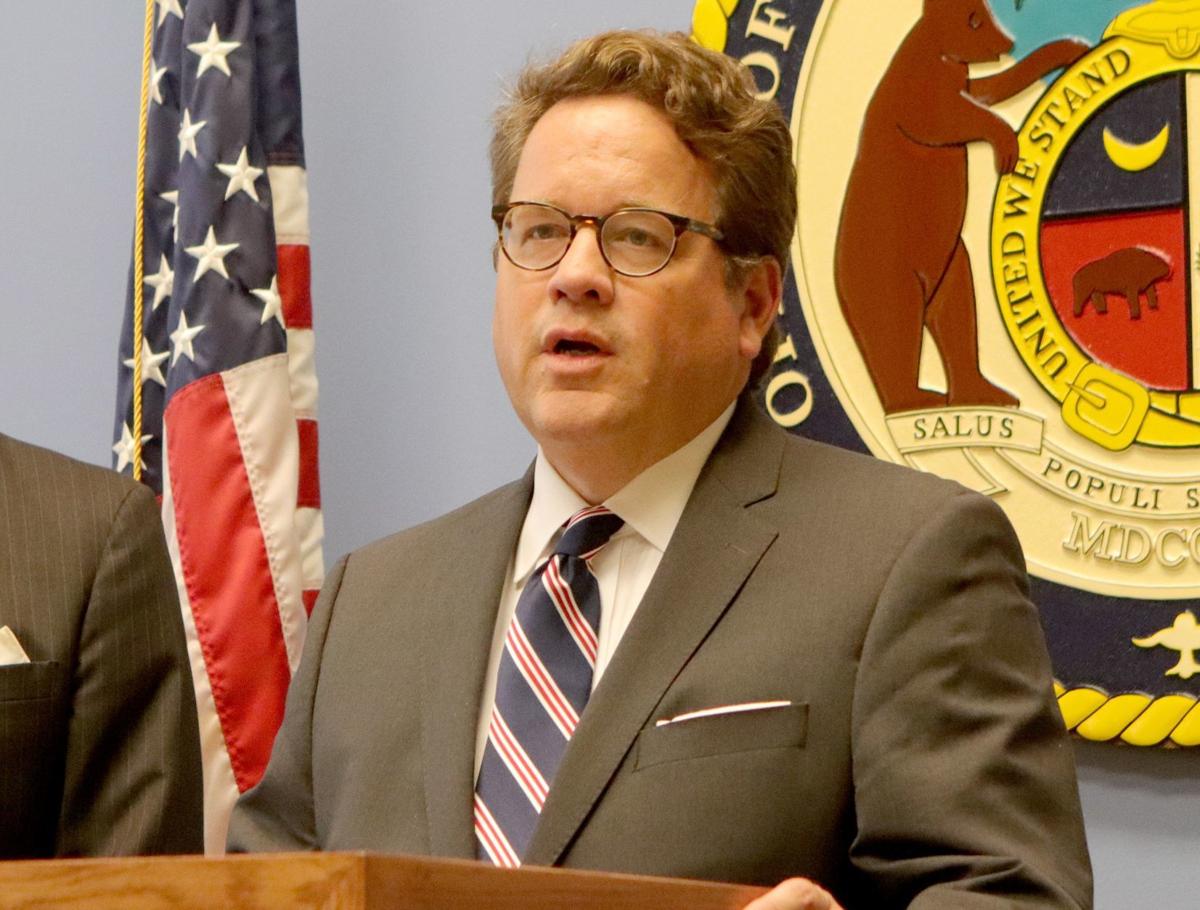