Susan Brouk and her two children were driven to a pond in rural Missouri on Feb. 1, 1998. The mother had been raped before she and her young son were stabbed and then thrown into the pond to drown. Brouk's young daughter was suffocated.

On Tuesday, nearly 19 years to the day after the attacks, one of the killers is set to be executed.

Mark Christeson, 37, is scheduled for lethal injection at 6 p.m. at the state prison in Bonne Terre. His attorneys have asked the U.S. Supreme Court to halt the execution, arguing among other things that his trial lawyers were unqualified, but the court has yet to rule.

If the lethal injection is carried out, it will mark Missouri's first execution since May.

The appeal argues that Christeson's trial lawyers were so inept that they missed a deadline for a federal court appeal, which is a standard procedure in death penalty cases. The issue was also the focus of his 2014 appeal to the Supreme Court, which halted his execution just hours before it was set to be carried out.

His lawyers have also argued that he has an IQ of 74 and was mentally incapable of understanding his legal rights during his original trial.

"If there is a person who deserves the death penalty, it is this defendant," Schwartze said.

Christeson was 18 when he and his 17-year-old cousin, Jesse Carter, decided to run away from a home outside Vichy in south-central Missouri where they lived with a relative.

The two teenagers took shotguns and went to a home about a half-mile away where Brouk lived with her 12-year-old daughter, Adrian, and 9-year-old son, Kyle. The cousins planned to steal Brouk's Ford Bronco, Schwartze said.

When they arrived at the home, the cousins tied the children's hands with shoelaces. Investigators said Christeson forced Brouk into a bedroom and raped her, but when they went back into the living room, Adrian recognized Carter and said his name.

"We've got to get rid of 'em," Christeson told Carter, according to court records.

The family was forced into the Ford Bronco. Christeson and Carter loaded the SUV with electronics and other items and drove to a pond, according to investigators.

Court records indicate that Christeson kicked the 36-year-old mother in the ribs and cut her throat, and then cut Kyle's throat and held the child under water until he drowned. Carter held Adrian while Christeson pressed on her throat until she suffocated, and then Carter pushed the girl's body into the pond.

As Brouk struggled to stay alive, the cousins tossed her into the pond, where she drowned.

Brouk's sister alerted authorities a few days later that the family was missing. A Missouri Highway Patrol helicopter spotted one of the bodies in the pond, leading to a search that found the bodies of all three victims.

Meanwhile, Christeson and Carter drove to California, selling Brouk's household items along the way. A detective in California's Riverside County recognized the cousins from photos police had circulated. They were arrested eight days after the killings.

Carter agreed to testify against his cousin. He was sentenced to life in prison without parole.

Missouri executed 16 men from 2014 to 2015, second only to the 23 executions in Texas over the same two years. Last year, Missouri had just one execution, largely because most of the 25 men on the state's death row have appeals remaining or are unlikely to be executed due to medical or mental health concerns.

Read more about the case here. 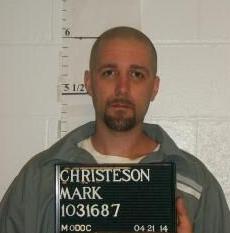