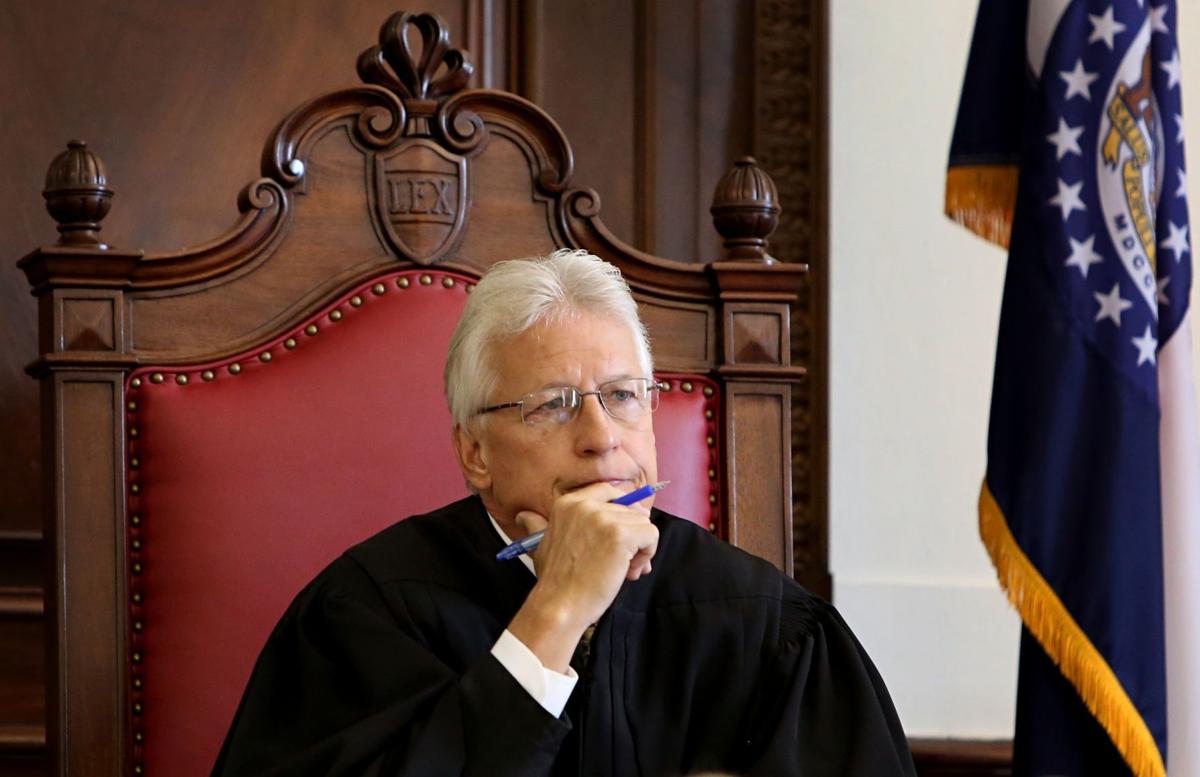 ST. LOUIS • The name of a woman at the center of a criminal case against Gov. Eric Greitens will be used in court, the judge ruled Wednesday, along with the names of other witnesses.

How will governor govern from St. Louis courthouse?

The judge declined to rule in open court on a motion on whether the woman’s sexual history can be addressed at trial. Greitens’ lawyers argued that it is relevant because of her denial in testimony that she was a willing participant. St. Louis Circuit Judge Rex Burlison said he would take the motion up in chambers.

The rulings came during a hearing considering last-minute filings in the trial on a felony invasion of privacy charge.

Greitens, 44, is expected to appear in court Thursday and Friday for jury selection. Greitens was indicted in February, accused of taking a semi-nude photo of a woman without her consent when he had an affair with her more than three years ago, before he was elected governor.

The defense had objected to the state labeling the woman as a victim, arguing it would be prejudicial to Greitens, given that she has never formally complained to the police about Greitens.

Burlison tabled consideration of a bid by prosecutors to bar Greitens’ lawyers from calling the former lead investigator on the case, William Don Tisaby.

Prosecutors are not planning on calling Tisaby, who asserted his Fifth Amendment right against self-incrimination during a second deposition and could do so again if called to testify.

Greitens’ lawyer Scott Rosenblum claimed Tisaby “infected” the case with lies and by altering the testimony of witnesses.

He suggested calling an alternate witness, Circuit Attorney Kim Gardner, who was present during many of Tisaby’s interviews. Lawyer Jim Martin suggested it could be part of the sanctions for misconduct Burlison mentioned in previous hearings. Prosecutors had already been sanctioned by allowing the defense team to re-interview witnesses to see the effect Tisaby or other alleged misconduct may have had.

But Burlison said he would decide after the evidence is introduced, saying he did not want “to put my thumb on the evidence.” He did vow, however, that “the issue of sanctions (against prosecutors) has not been concluded.”

Also Wednesday afternoon, Burlison again refused to allow witnesses for the state to explain to jurors the inner workings of iPhones.

Those witnesses were expected to weigh in on whether photos taken by a phone are transmitted, as defined by the invasion of privacy charge Greitens is facing. Transmittal of an image “that allows access to that image via a computer” is one of the requirements.

In a motion Tuesday written by Harvard Law professor Ronald S. Sullivan, a special assistant circuit attorney working on the case, prosecutors said transmission does not require Greitens to have sent the image to another person. It occurs, they said, in microseconds on a smartphone, which “is a computer,” and the image is sent to a camera microcomputer and to the memory for storage.

An iPhone also sends the image to cloud storage by default, says the filing, which cites patents by Apple and others.

Burlison asked prosecutors again whether a photo was in their possession or whether there was direct evidence of a transmission to “cloud” storage. After being told no, he said jurors didn’t need to be told how an iPhone works. He had already ruled that way Monday.

Burlison also declined to exclude evidence of $120,000 paid to the lawyer for the ex-husband of Greitens’ accuser. Prosecutors have said they will use the testimony of the ex-husband only to authenticate recordings of the woman discussing the affair with Greitens.

Burlison rejected a statement by Chief Trial Assistant Robert Dierker that the information about the cash would be a “red herring” that would distract jurors. He said jurors would be told to consider the potential interests, prejudices and biases of every witness.

Prosecutors sought to block evidence regarding the sexual history of Greitens’ accuser, but defense lawyers filed a motion that says her sexual history is “a very relevant issue to her credibility.” Their motion argues that because the woman has testified that “she was less than fully consenting” to the sexual encounter in the basement March 21, 2015, that the “frequency or voluntariness of her sexual activity with” Greitens is relevant.

The filing says she has testified that she never let anyone take a nude picture of her. She also has testified, the filing says, about “being taped to exercise rings and other activities which have a ‘Fifty Shades of Grey’ overtone.” Her interest in the book and such activities, defense lawyers said, is relevant to what happened in Greitens’ basement.

Lawyers on both sides did agree that only one person from each side would be allowed to question witnesses, and that jurors would not hear about the other investigations Greitens is facing.

And investigators apparently are still going through information recovered in a search of Greitens’ phone and email data Tuesday, according to court testimony.

Left unresolved Wednesday was the extent to which Lauren Trager, a reporter for KMOV-TV (Channel 4), would be excluded from observing the trial since she has been listed as a witness. According to Greitens’ accuser’s testimony before the Missouri House, Trager set up a hair appointment at the woman’s salon under a false name in December before revealing her real identity and saying she wanted to talk about Greitens.

The judge rejected requests for audio recordings and sketch artists in the courtroom but said he would allow still photography for the first 10 minutes of the first day of the trial.

The jury pool of 160 people will be narrowed to 12 jurors and three alternates over three days, with opening statements expected to begin Tuesday. The judge decided the jury will not be sequestered.

On Wednesday morning, St. Louis Sheriff Vernon Betts and security personnel were spotted inspecting an entry to the building where the Greitens’ trial is being held. 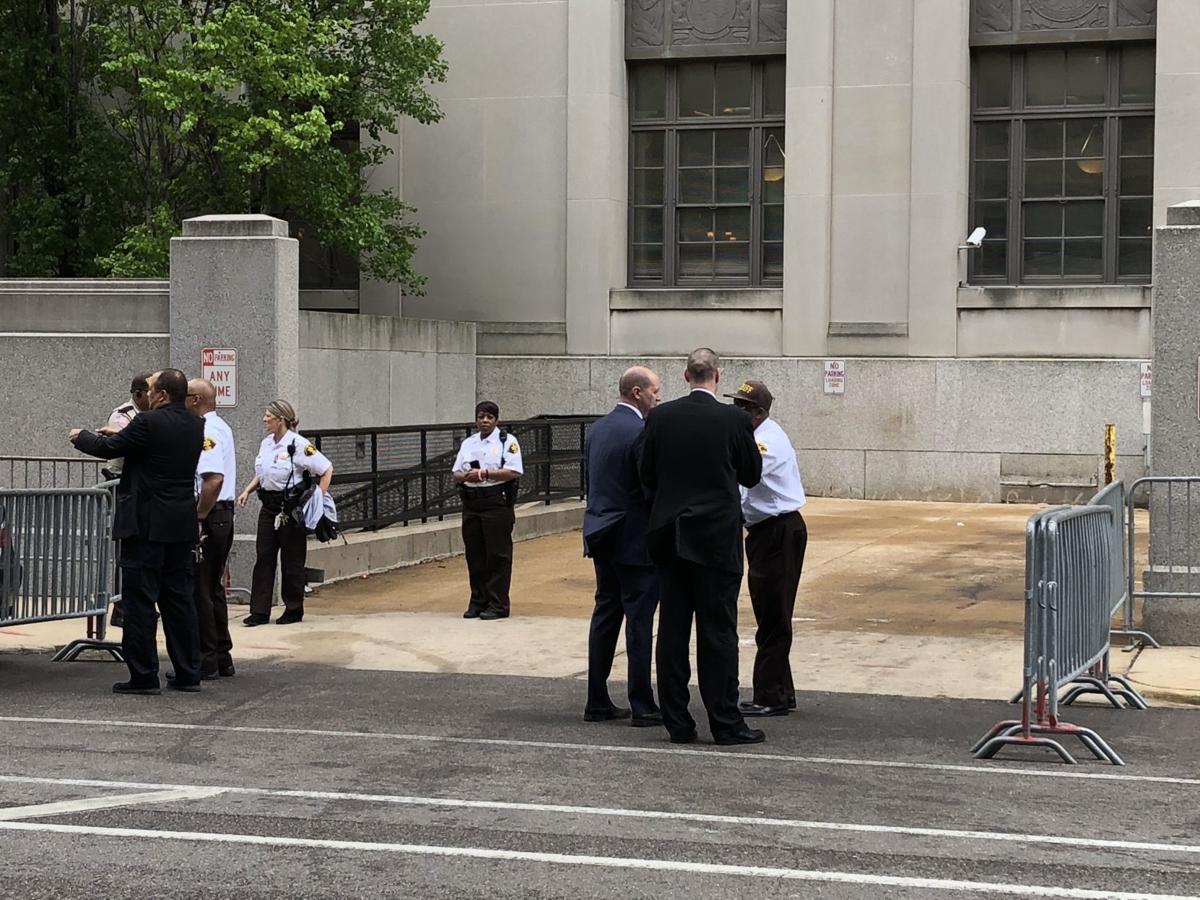 St. Louis Sheriff Vernon Betts, his staff and other security personnel inspect the Civil Courts building a day before jury selection is set to begin in the criminal trial of Gov. Eric Greitens on an invasion of privacy charge. Photo by Robert Patrick, rpatrick@post-dispatch.com