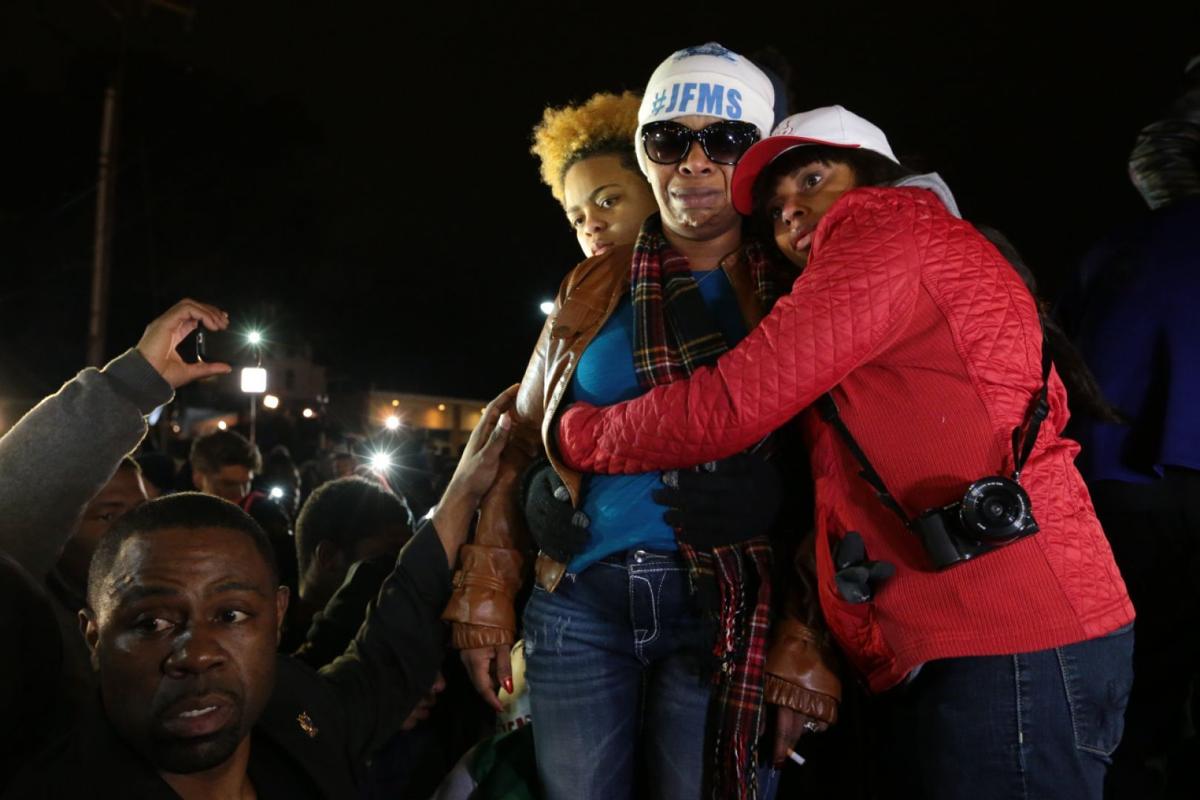 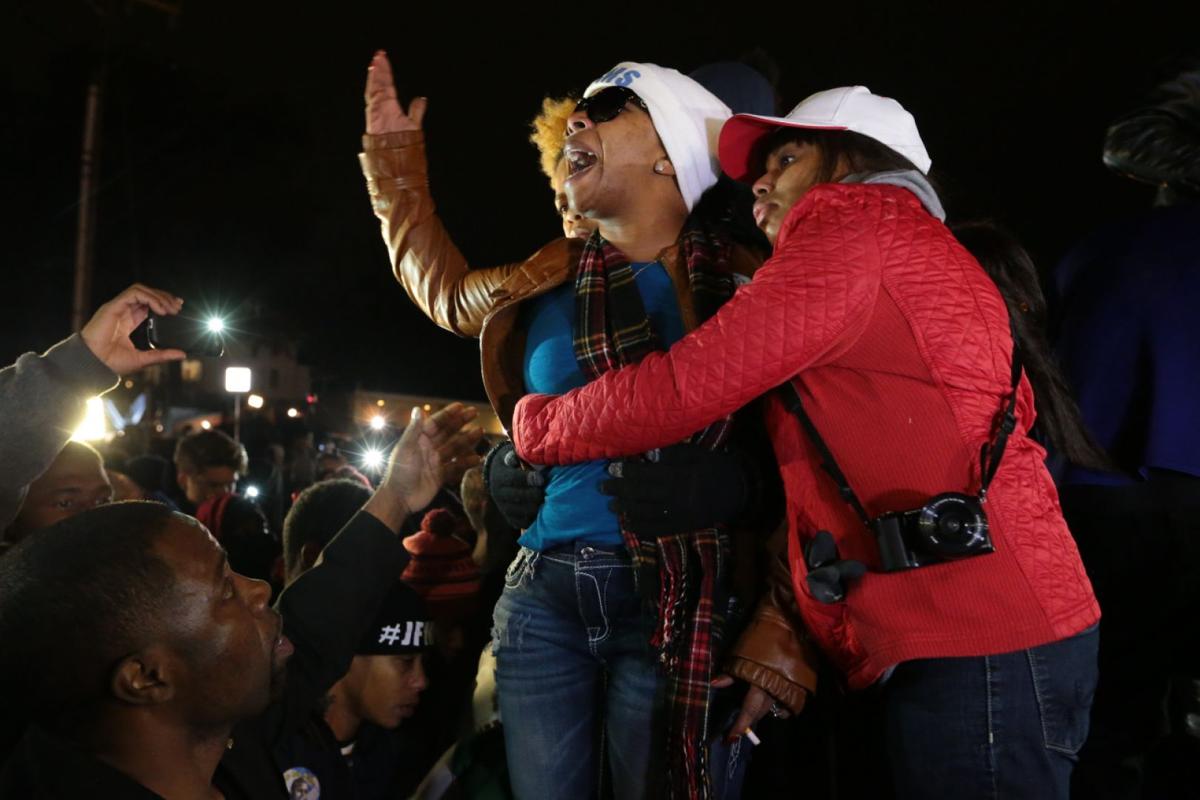 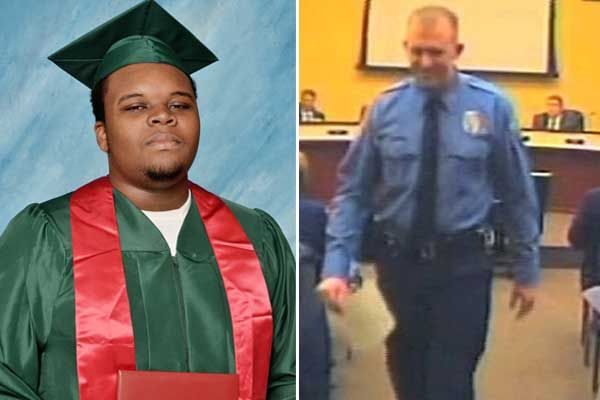 CLAYTON • Officer Darren Wilson will not face state criminal charges in the killing of Michael Brown in Ferguson.

St. Louis County Prosecuting Attorney Robert P. McCulloch announced Monday night that a grand jury delivered a "no true bill" after considering possible charges in the case, meaning an indictment will not be handed down.

The grand jury considered a range of charges from murder in the first degree to involuntary manslaughter, McCulloch said, before returning the decision not to indict.

"As tragic as this is, it was a not a crime," McCulloch said. "It doesn't lessen this tragedy. There is still a loss of life here. The family is going to have that loss forever.

He said the protests spawned by the shooting have started an important conversation.

McCulloch began speaking about 15 minutes after 8 p.m., the time designated earlier Monday for the long-awaited announcement. He gave a lengthy description of the case before reaching his conclusion: "The grand jurors deliberated over two days before making their final decision. They determined that no probable cause existed to file any charges against officer Wilson."

A separate federal investigation into whether Wilson violated Brown's civil rights is continuing, officials said. McCulloch said the two investigations had worked in harmony and evidence was shared with investigators from both levels of government.

"Our only goal was that our investigation would be thorough and complete," he said.

Wilson's shooting of the unarmed youth in a confrontation Aug. 9 triggered months of protests, and focused national concerns about policing and race on a suburban St. Louis community that had considered itself a strong example of racial harmony.

Officials, Brown's family and some protest leaders pleaded for a peaceful reaction to news that seemed certain to anger those who called for Wilson's arrest and immediate prosecution for murder.

The family of Michael Brown said in a statement that they were "profoundly disappointed that the killer of our child will not face the consequence of his actions."

They also urged protesters to avoid violence and to work to force police officers to wear body cameras.

"While we understand that many others share our pain, we ask that you channel your frustration in ways that will make a positive change," they said in the statement. "We need to work together to fix the system that allowed this to happen. Join with us in our campaign to ensure that every police officer working the streets in this country wears a body camera."

Lawyers for Darren Wilson issued a public statement Monday night after learning he would not be indicted, saying, in part, that Wilson "followed his training and followed the law" when he shot and killed Michael Brown Aug. 9.

Protesters began gathering in Ferguson shortly after it was announced that the grand jury had made a decision. A smaller crowd gathered in Clayton, where the announcement of the decision was made to members of the media inside a courtroom where preliminary hearings and arraignments are typically held.

At the police command center in Jennings, near the Ferguson protest area, there was no visible reaction on the faces of more than 200 police officers inside the command center watching the press conference on television. The room was silent.

After McCulloch shared the jury’s decision, the officers dispersed and began suiting up in preparation for the night.

McCulloch, who could have decided on his own whether to charge Wilson, chose instead to take the case to a grand jury. Its 12 members meet in secret and usually hear just a synopsis of evidence before voting on whether to issue an indictment, a legal action that results in a trial.

But in this case, the prosecutor had two assistants present all the evidence available — meaning the grand jurors heard testimony from every witness and saw every report, photograph and video before deciding. Nine of 12 votes are required for in an indictment, but the vote count remains secret.

McCulloch started the announcement offering sympathies the family of Brown.

"Regardless of the circumstances here, they lost a loved one to violence," he said. "I know that the pain of such a loss knows no bounds."

McCulloch said the presentation of evidence and deliberations were done on the grand jury's schedule. The grand jury met on 25 different days, he said, hearing 70 hours of testimony from 60 witnesses.

"It is important to note here and say again, that they are the only people who have heard and examined every witness and every piece of evidence," he said of the grand jury.

McCulloch criticized some news media, saying, "A most significant challenges has been the 24-hour news cycle and the insatiable appetite for something, anything, to talk about."

McCulloch said some witnesses disagreed with others, and sometimes physical evidence didn't match witness statements. Almost all the initial interviews of witnesses, including Wilson, were recorded, McCulloch said.

Most witnesses said Wilson fired the final shots at Brown as the teen moved towards the officer.

"Many witnesses to the shooting gave statements inconsistent with other statements they made and in conflict with the physical evidence," he said. "...Some even admitted they didn't witness, but merely repeated what they had heard."

What is not in dispute is that Brown, 18, took a $48 package of cigarillos about noon that day from the Ferguson Market on West Florissant Avenue and had some kind of physical encounter with Wilson, 28, shortly later as the officer sat in a police SUV on Canfield Drive.

Brown's companion, Dorian Johnson, said Wilson drove up, ordered them to stop walking in the street, then reached through the open driver's side window and grabbed Brown by the neck to pull him in. Police said Wilson had pushed the door closed to keep Wilson from getting out of the SUV before the men struggled through the window and at least one shot was fired from the officer's handgun.

The official autopsy indicated that Brown suffered a close-range wound to the thumb, which Wilson's supporters took to indicate that Brown was reaching for the weapon. His blood was found on the 9mm Sig Sauer semi-automatic.

Witnesses said Brown ran from the vehicle and that Wilson tried to chase him. Some bystanders said Brown had his hands up and was shot when surrendering. Some said he was shot in the back. Sources close to Wilson said he told officials that Brown stopped and aggressively turned back toward him before he fired two volleys.

Brown was shot at least six times, with at least five wounds in the front and one that could have been from the front or back depending upon the position of his arm at the moment. A shot to the top of his head, which may have occurred while he was falling or lunging, officials said, was fatal. Toxicology showed that Brown had used marijuana.

People in the community were angered that Brown's body lay in the street for more than four hours during the investigation, although officials have said that is not an unusually long time.

Simmering protests broke into open violence the next night, when protesters burned a Quik Trip service station and hauled merchandise from some stores along West Florissant. That led to weeks of confrontations between protesters and police who used tear gas and rubber bullets to try to keep control.

The protests have continued since.

Wilson was put on paid leave and has been in hiding. He did testify before the grand jury, an unusual step for the target of an investigation. He and Ferguson Police Chief Thomas Jackson have thus far resisted calls for them to resign, although it seemed highly unlikely that Wilson could resume duties as a Ferguson patrolman.

Jeffrey Mittman, executive director of the American Civil Liberties Union of Missouri, issued a statement saying, in part: "The grand jury's decision does not negate the fact that Michael Brown's tragic death is part of an alarming national trend of officers using excessive force against people of color, often during routine encounters. Yet in most cases, the officers and police departments are not held accountable.

"While many officers carry out their jobs with respect for the communities they serve, we must confront the profound disconnect and disrespect that many communities of color experience with their local law enforcement."

Prosecutors said they had promised to protect identities of those who testified to a grand jury about the police shooting in Ferguson.

Officer says he followed his training and the law in shooting Michael Brown.

IN CLAYTON: A few eggs thrown, but no other reaction from the small crowd outside the county Justice Center

To follow is a transcript of the statements by St. Louis County Prosecuting Attorney Robert P. McCulloch on Monday night as he announced the d…