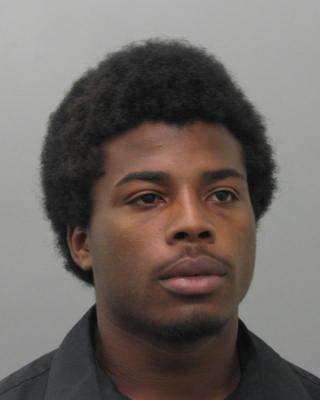 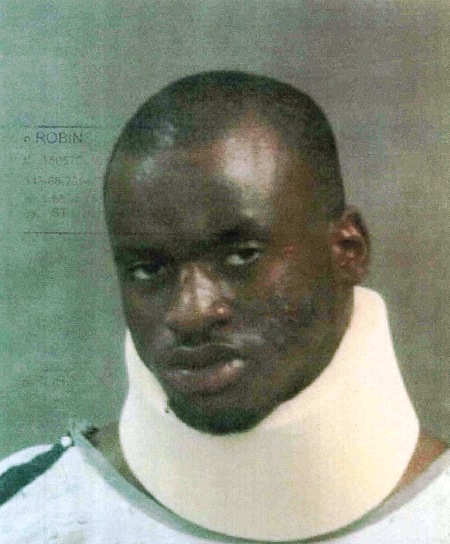 Jamaal D. Robinson is charged in a fatal shooting in Forest Park. 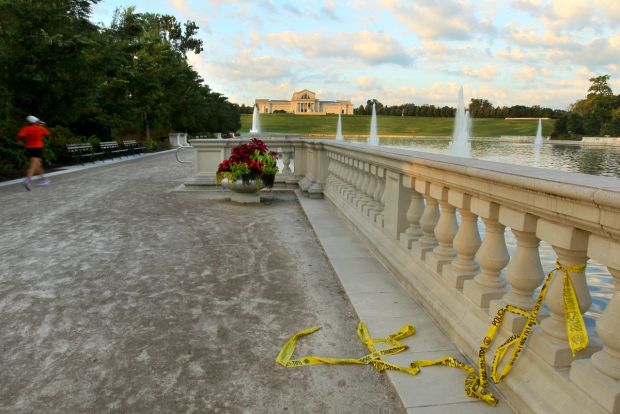 A jogger runs by crime scene tape that marks the area near a fatal shooting involving an off-duty St. Charles County sheriff's deputy at the Grand Basin in Forest Park on Tuesday, September 24, 2013. Photo By David Carson, dcarson@post-dispatch.com 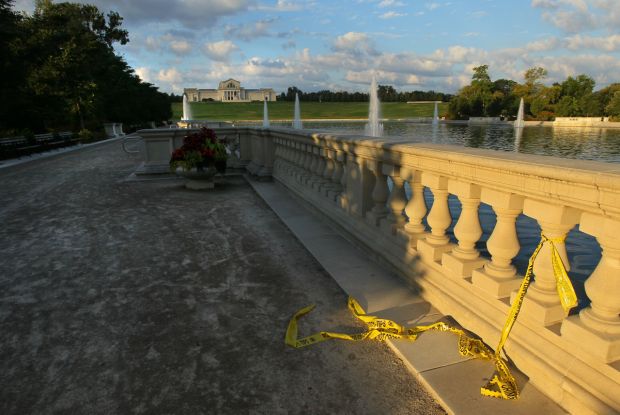 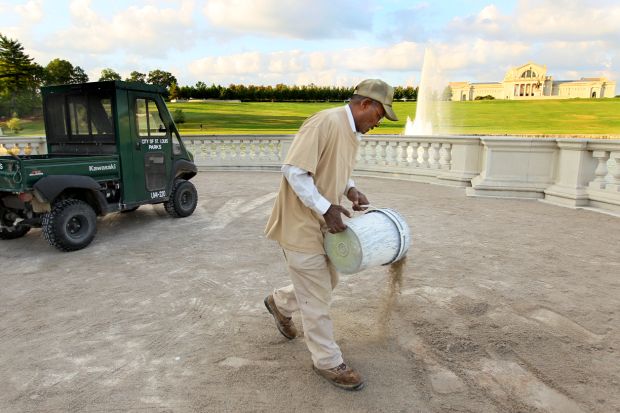 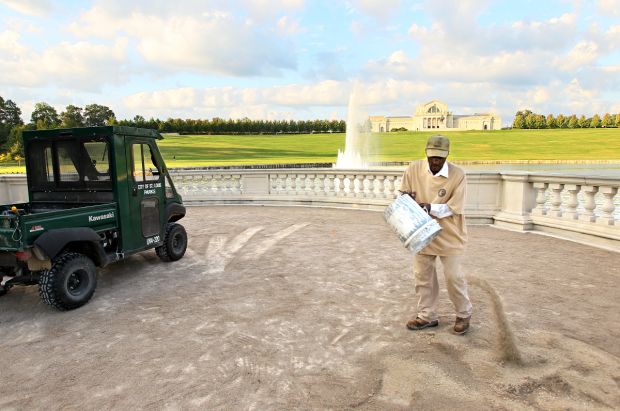 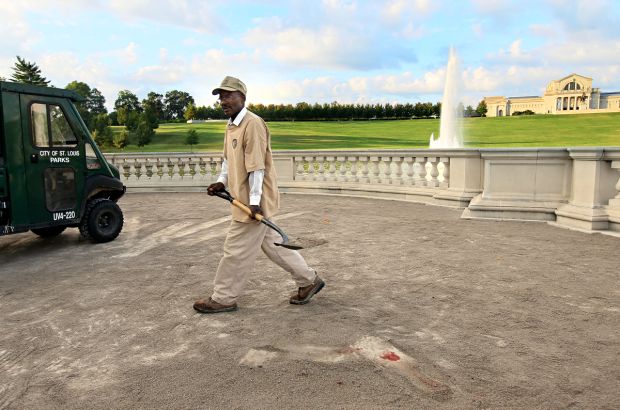 “Don’t make me kill you,” one of them told an off-duty St. Charles County sheriff’s deputy after approaching him and his female jogging partner, authorities say.

The deputy announced he was a police officer and opened fire, killing Antonio Nash, 18, and wounding the two other men in what police say appeared to be a justifiable shooting.

The two wounded men, Joshua Hunter and Jamaal Robinson, both 20 and of the 5600 block of Delmar Boulevard, were charged Tuesday with second-degree murder, attempted robbery, first-degree robbery and armed criminal action.

Second-degree murder charges — also known as felony murder — can be filed against anyone committing a felony in which someone is killed.

St. Charles County Sheriff Tom Neer said that, after talking with his deputy and to St. Louis city homicide investigators, he had every reason to believe the shooting was justified. He said he thought his deputy — “a competent, well-trained deputy” assigned to a federal task force — acted to save his life and possibly the life of the woman with him.

“If someone is going to rob you and point a gun at you, you can assume they have intent to kill you and take your worldly possessions,” Neer said Tuesday. “That’s what guns do, they kill you.”

According to police, the deputy and his friend stopped jogging near a corner of the Grand Basin at the foot of Art Hill about 11:15 p.m. A young man walked slowly past them. The deputy grew suspicious, police say, and put his gun at his side. As the deputy and the woman turned the corner, three men came toward them and said they were going to rob them. The men were wearing hooded shirts and dark clothing.

When the deputy saw the gun, he pulled his, announced he was a police officer and opened fire, officials say. He told investigators that he saw a gun and feared for his life.

Nash lived in the 2700 block of North Kingshighway Boulevard, police said. He died of three gunshot wounds to his lower abdomen. Hunter was shot in the buttocks and listed in critical but stable condition at a hospital. Robinson was shot in the neck. Police characterized his condition as guarded and stable.

Police haven’t revealed how many shots the deputy fired but said he used his department-issued .40-caliber pistol. Nash did not fire his weapon, which was recovered at the scene, police said.

Family and friends of Nash gathered at his home in the O’Fallon neighborhood in north St. Louis on Tuesday evening. Nash’s mother, Stephanie Nash, said her son had recently lived at the Covenant House shelter for homeless teenagers in the 2700 block of North Kingshighway Boulevard and had been in trouble before. She said she did not know the other two suspects.

“Right now, I’m just trying to get past this day,” she said, declining to comment further.

The St. Louis Parks Department said there was a curfew in Forest Park from 10 p.m. to 6 a.m. Dan Skillman, city parks commissioner, said the curfew applied to everyone regardless of age for most city parks, though vehicles are allowed to pass through.

Leah Freeman, a city police spokeswoman, said there have been six assaults, one rape and one robbery in Forest Park since Jan. 1. There have been 216 property crimes in that period: 204 reports of larceny and 12 auto thefts.

St. Louis police have not revealed the identity of the deputy, and Neer refused to release his name. Sheriff’s Lt. Dave Tiefenbrunn said the deputy had worked for the department for six years, and was an officer for 10 years before that with two other departments.

Neer said he didn’t know of any other instance when the deputy had fired at someone. As is department protocol, Neer said the deputy would be put on administrative leave while the investigation continues.

Neer talked with the deputy by phone after the shooting Monday night.

“He’s dealing with it, and obviously he’s upset over the situation,” Neer said.

Susan Weich and Valerie Schremp Hahn of the Post-Dispatch contributed to this report.

Police said they expect the student to survive

The life-altering encounters  leave some shooters grappling with questions, and one carries doubts.

Health Department official Edward Mueth committed suicide hours before he was to meet with his bosses on the matter.

Jamaal D. Robinson is charged in a fatal shooting in Forest Park.

A jogger runs by crime scene tape that marks the area near a fatal shooting involving an off-duty St. Charles County sheriff's deputy at the Grand Basin in Forest Park on Tuesday, September 24, 2013. Photo By David Carson, dcarson@post-dispatch.com 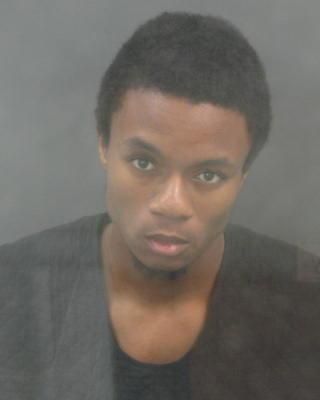 Joshua Hunter, of St. Louis, pleaded guilty to murder in a botched robbery that ended with one of his accomplices dead.