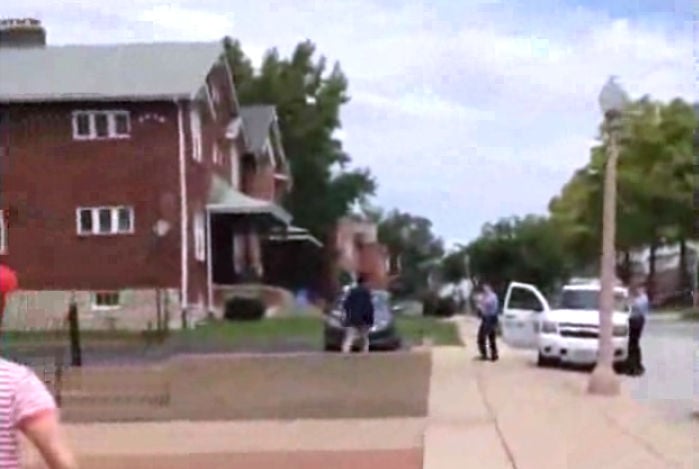 A still from a cellphone video of the police shooting of Kajieme Powell in St. Louis on Aug. 19, 2014. Powell, who had a knife and was acting erratically according to witnesses, approached two officers, who both opened fire. The video was taken by a witness and released by St. Louis police. 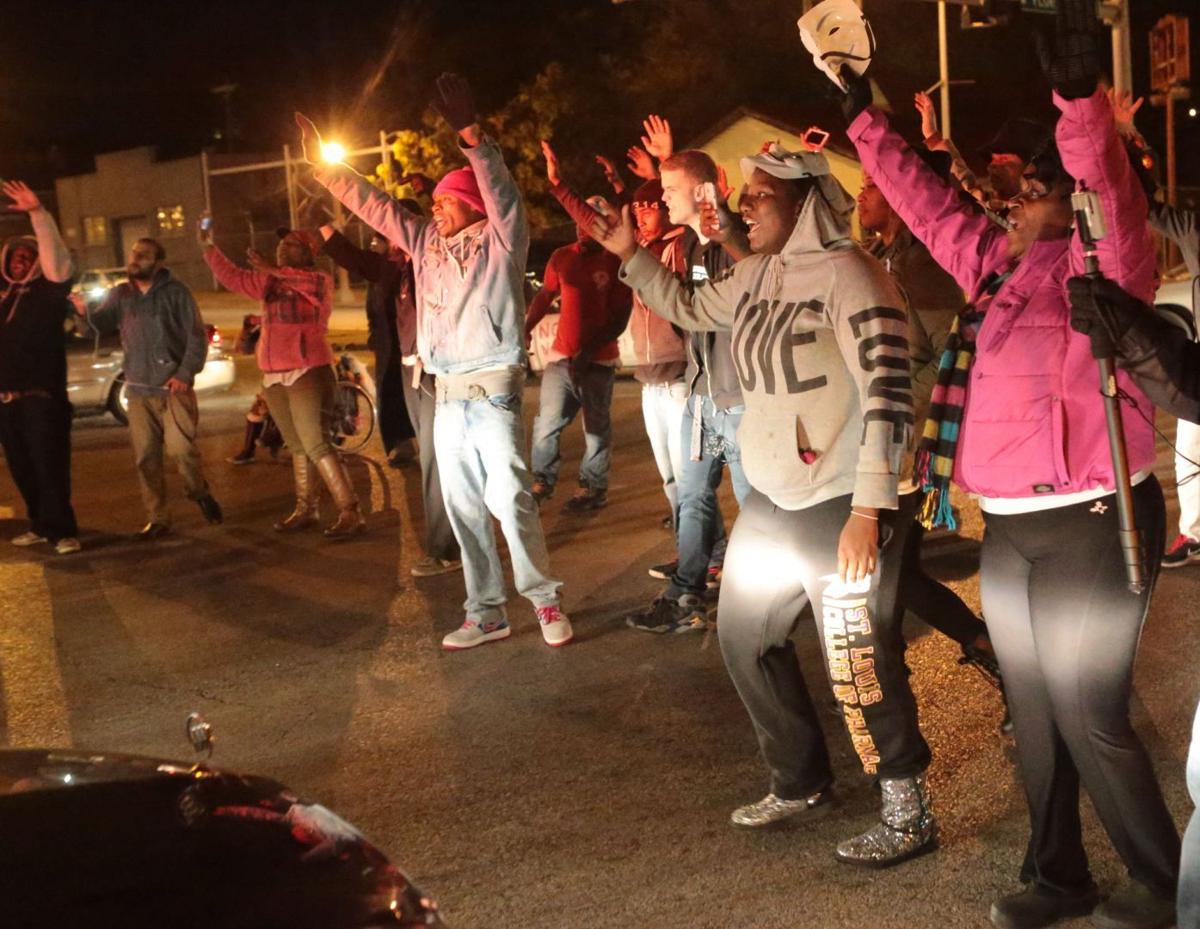 Protesters shut down traffic for justice in the St. Louis Police officers' fatal shooting of Kajieme Powell on Wednesday, Oct. 29, 2014, at the intersection of Riverview Boulevard at W. Florissant Ave. About 50 protesters rebuilt the Powell memorial before closing down two intersection in acts of civil disobedience. Photo by Laurie Skrivan, lskrivan@post-dispatch.com

ST. LOUIS • Three times, Internet sites claimed to know the name of the Ferguson police officer who killed Michael Brown. Each name they posted turned out to be wrong.

Now there are names floating around online again — this time purporting to identify the St. Louis officers who killed Kajieme Powell.

Officials won’t say whether those names are accurate, but police chiefs fear the consequences either way. They say people with an Internet connection but little conscience — and who generally do not use their own real names — are recklessly endangering lives.

The Internet adds a new dimension to a longstanding debate between police and news media over protecting officers from harm and satisfying the public’s right to know who is exercising the power of deadly force.

Many agencies try to keep it secret. Indeed, the FBI had never even publicly acknowledged that its agents killed murder suspect Major Washington in Hanley Hills on Nov. 26 after he wounded two agents.

St. Louis police policy calls for the name of an officer to be released if indicated by an assessment of threats against his or her safety. But sometimes there is a short circuit. Lawyers for the family of VonDerrit Myers Jr., killed in a shootout in the Shaw neighborhood Oct. 8, accurately outed the city officer involved — Jason Flanery.

Angry attitudes toward police since Officer Darren Wilson killed Brown on Aug. 9 have heightened concern about retaliation. One misidentified officer there temporarily relocated his family.

The Powell case is unusual in that a bystander’s cellphone video recorded the entire event. The two officers who fired were fully visible, if at a distance. Several people took to social media this week to post what they claimed were the officers’ names, home addresses, pictures from Facebook and family information.

St. Louis police Chief Sam Dotson declined to comment on those names, but said he favors releasing them once the investigation and assessment of potential threats is resolved.

“Now, through social media, these officers, without any due process at all, are outed, tried and convicted,” the chief complained. “And ultimately, what will happen if their information is wrong? These people are asking police officers to use self-restraint, and the same goes for the public. To harass and intimidate officers and officers’ families just isn’t right.”

It is not clear how much damage has been done, although it has been revealed that some officials — including Jackson and St. Louis County Police Chief Jon Belmar — were victims of identity theft.

Rick Rosenfeld, a criminologist at the University of Missouri-St. Louis, said, “One could argue that it will lead to de-policing because officers fear if they engage in violent encounters, it could lead to their identification and jeopardize their safety.”

He said the risk of misidentification is high, “particularly when there are multiple officers on a scene. Some may have discharged firearms and others may not have, so which of officer is ‘at fault’ in most cases, one really doesn’t know prior to an investigation.”

In the Powell killing, two officers each fired six shots as he came toward them with a steak knife in the 8700 block of Riverview Boulevard on Aug. 19. It happened 10 days after the Brown killing triggered massive protests that spread across the country.

Jackson, the Ferguson chief, said online attempts to reveal Brown’s killer in the early days led him to recommend that officers disable their online presence “because it exposes them to all kinds of bad things.”

He said the online attacks erased the humanity of his officers by drawing conclusions about their personalities based on their social media habits alone.

Jackson said he took the misidentified officers off the streets temporarily for their safety, putting a strain on the rest of the 53-member force. He said the pressure of having the wrong officers outed almost daily “was a factor” in expediting release of Wilson’s name.

“It seemed like social media was on somewhat of a fishing expedition,” Jackson said. “It was a unique situation because we had riots going on and a surge of media wanting the officer’s name. Some people wanted the name as news and there were people who wanted the name so they could exact vengeance upon him or disrupt his life through identity theft.

“It puts officers in a tough spot when their name is identified with something that public and with that much social media hatred, it’s definitely cause for concern.”

The St. Louis Police Officers Association is in “constant contact” with the officers recently named in the Powell killing, and with the department, regarding security precautions, said Jeff Roorda, the group’s business manager.

“It’s irresponsible when you don’t know for certain whether the person you’re placing in front of firing squad is the right person,” Roorda said. “You know there are fringe elements out there who want to kill cops, so this is literally like yelling ‘fire!’ in a crowded movie theater.”

When are online threats a crime? Issue is muddy.

No charges against St. Louis officer who killed VonDerrit Myers

Police investigation, and report, are separate from circuit attorney's.

Cellphone video of the officer-involved shooting of Kajieme Powell

Around the nation, new policies and training emphasize methods to minimize use of force.

Kajieme Powell came at police with a knife, officials say.

Two St. Louis area police shootings are alike, and not

Weapon and video separate the killings of Michael Brown and Kajieme Powell.

A still from a cellphone video of the police shooting of Kajieme Powell in St. Louis on Aug. 19, 2014. Powell, who had a knife and was acting erratically according to witnesses, approached two officers, who both opened fire. The video was taken by a witness and released by St. Louis police.

Protesters shut down traffic for justice in the St. Louis Police officers' fatal shooting of Kajieme Powell on Wednesday, Oct. 29, 2014, at the intersection of Riverview Boulevard at W. Florissant Ave. About 50 protesters rebuilt the Powell memorial before closing down two intersection in acts of civil disobedience. Photo by Laurie Skrivan, lskrivan@post-dispatch.com