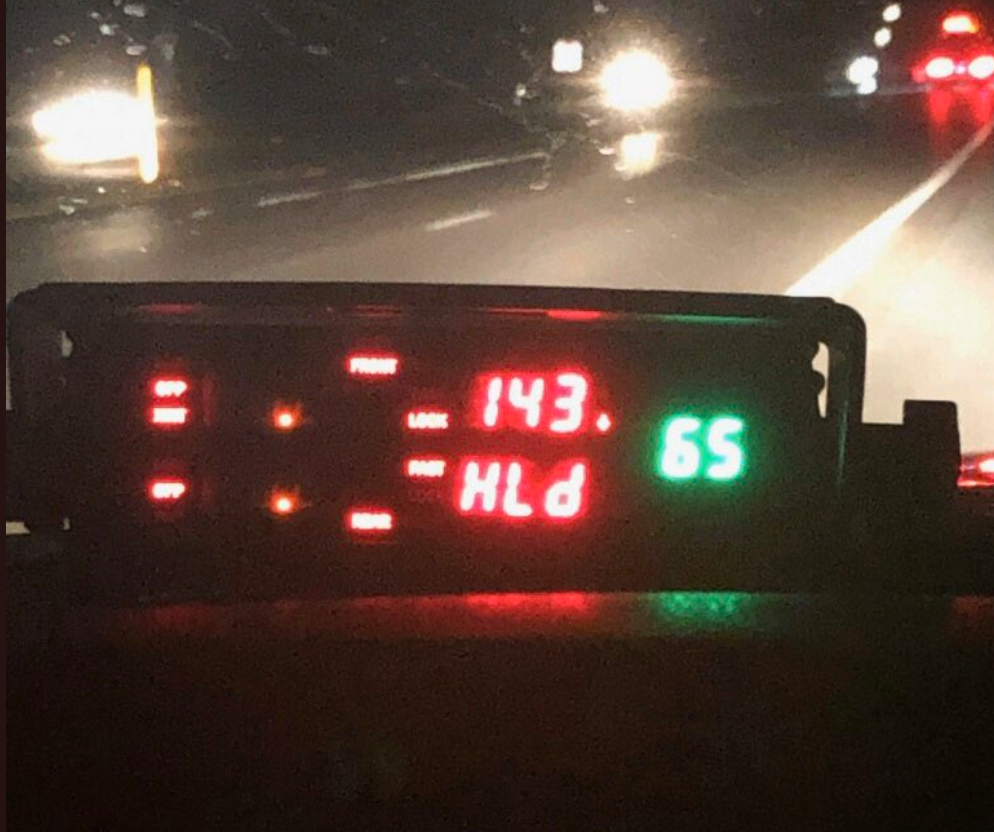 Trooper William Grose took a photo of his radar after he caught a man driving a Dodge Charger 143 mph in a 65 mph-zone near Sedalia on April 14, 2020. Photo courtesy of Missouri Highway Patrol. 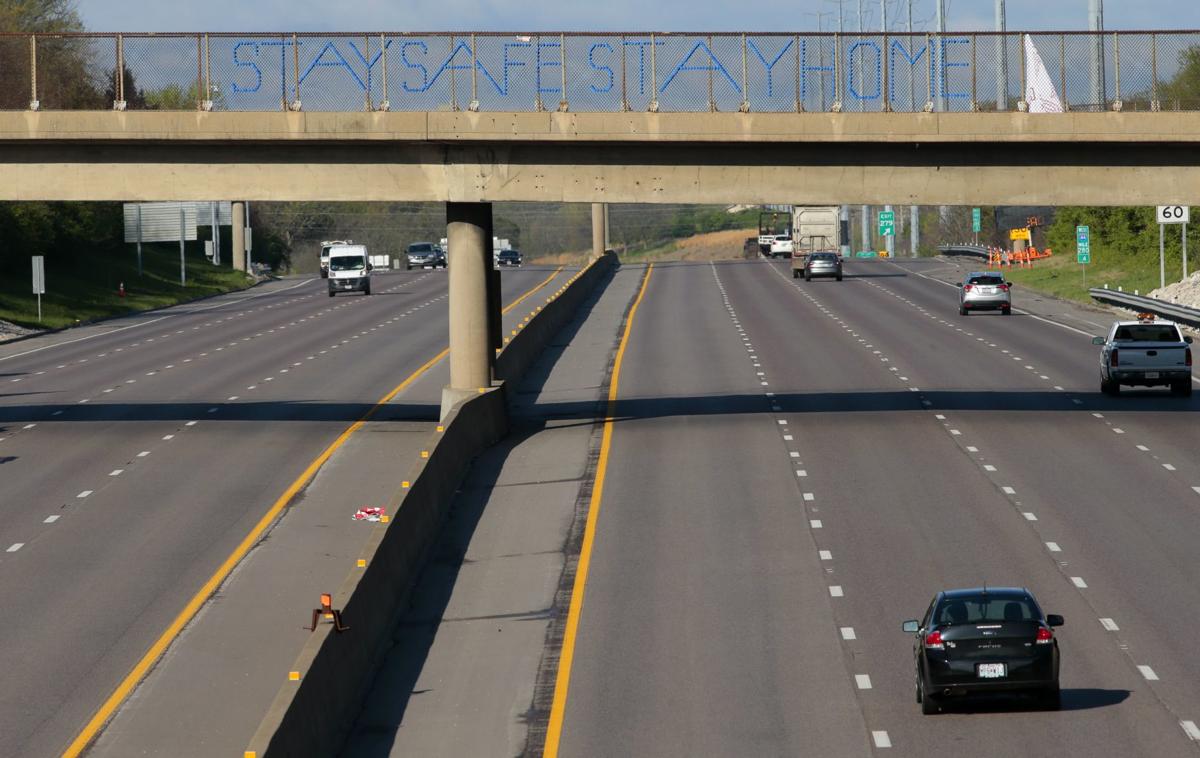 A sign made of cut pool floats implores drivers to stay home on Rock Hill Road over Interstate 44 in Webster Groves during morning rush hour on Monday, April 13, 2020. Photo by Robert Cohen, rcohen@post-dispatch.com

The driver of a sporty Dodge Charger wanted to see what his car could do, and he recently rocketed to 143 mph before a Missouri trooper caught up with him in western Missouri. On the same day, an SUV raced along Interstate 44 near Valley Park at 115 mph.

Both traffic stops, on opposite sides of the state this month, are part of a trend authorities are reporting during the coronavirus pandemic: a rise in reckless speeders who are turning the highways into racing tracks. At least once a day in Missouri, motorists are caught traveling faster than 100 mph on highways, the Missouri Highway Patrol said.

Stay-at-home orders this month have cut traffic by half, essentially freeing up highways and giving speeders open roads, authorities said. Troopers who have nabbed the speeders are hearing excuses ranging from “There’s no traffic” to “I’m not hurting anyone.”

In the past, these three-digit speeds surely would have led to arrest. Before the pandemic, most judges in the St. Louis region had an unwritten rule that anyone caught speeding over 100 mph should go to jail and post bond, police said. However, fear of spreading the coronavirus in jails means the highway patrol isn’t arresting even the fastest speeders. Instead, drivers are given a summons to appear in court and sent on their way.

“Jails aren’t taking anyone for tickets right now,” patrol Cpl. Dallas Thompson said. “They don’t want to bring people into the jail that might have the virus.”

At highway patrol headquarters in Jefferson City, Capt. John Hotz has a list of the top speeding violations in recent weeks. They include:

• The top speed statewide, so far, of 145 mph was a motorcyclist in Ray County on April 17.

• The Valley Park speeder, at 115 mph, on April 14 is the only incident for the patrol’s St. Louis metro area to rank among the worst offenders.

Rush hour traffic may be light, but there is NEVER a safe time to drive 115mph!!! Troopers across our state continue to commonly see speeds like this over the past few weeks. PLEASE don’t do this! Don’t risk your life or the life of others traveling around you!! #slowdown pic.twitter.com/HxO4jKyDf5

A truck driver from Belleville, Steve Blankenship, has been driving St. Louis highways for 14 years, delivering cardboard bales for recycling. He says he has noticed a change during the pandemic. “I’ve seen a few more crazy speeders,” he said. “It’s up a little bit, not a lot.”

Blankenship’s vehicle was sideswiped by an Altima that weaved in and out of cars and barreled past him on Interstate 70 on Wednesday. “I probably see at least one a day going excessively fast, a little more since the pandemic,” he said.

Overland police Chief Andy Mackey said speeders have always been on the roads, but he’s been noticing it more now on his drive home from work. “It’s crazy,” he said. “People probably feel there’s no traffic, so they’re a little more careless.”

Trooper William Grose is the one whose radar checked the Charger SRT going 143 in a 65-mph zone near Sedalia. The car was going in the other direction, so Grose quickly turned his patrol car around and needed about a mile to catch up with it.

“When I walked up to his window, I said, ‘Why in the world were you going that fast?’” Grose said. “He said, ‘I don’t know. I was just being stupid.’”

Grose took a photo of the radar and sent it to his supervisor, who posted it on Twitter. “78 mph over the posted speed limit is downright dangerous!” the post said.

Trooper Sam Carpenter from southwest Missouri said most of the “high rollers” say they were “just having fun.”

Before the pandemic, speeds that high were rare, he said. “We saw it occasionally, very rarely, simply because on a normal day our interstates were more congested,” Carpenter said. “It was difficult to drive that fast” on crowded highways.

Hotz said the highway patrol has written fewer speeding tickets during the pandemic because traffic is down. Troopers wrote 7,100 speeding tickets from March 23 through April 20 last year, compared with 2,900 during the same period this year, Hotz said.

“The difference,” he said, “is that many of the tickets that are written are for much higher speeds.”

Thompson said the St. Louis metro area has 50 additional troopers patrolling the roads because those troopers normally work at the casinos, which are closed.

Gov. Mike Parson's administration had sought to revoke the license of the health care provider

Kylan Harrell was found with a gunshot wound on a residential street Tuesday night and taken to a hospital where he was pronounced dead.

Charges against Darren Alexander Jr. in the 2018 death of the woman were initially dropped, then re-filed three days after he was shot.

Father dies from injuries in three-car St. Louis crash that killed his daughter

The 40-year-old father, Roberto Dixon, died about three weeks after the crash that also killed his 4-year-old daughter.

Trooper William Grose took a photo of his radar after he caught a man driving a Dodge Charger 143 mph in a 65 mph-zone near Sedalia on April 14, 2020. Photo courtesy of Missouri Highway Patrol.

A sign made of cut pool floats implores drivers to stay home on Rock Hill Road over Interstate 44 in Webster Groves during morning rush hour on Monday, April 13, 2020. Photo by Robert Cohen, rcohen@post-dispatch.com