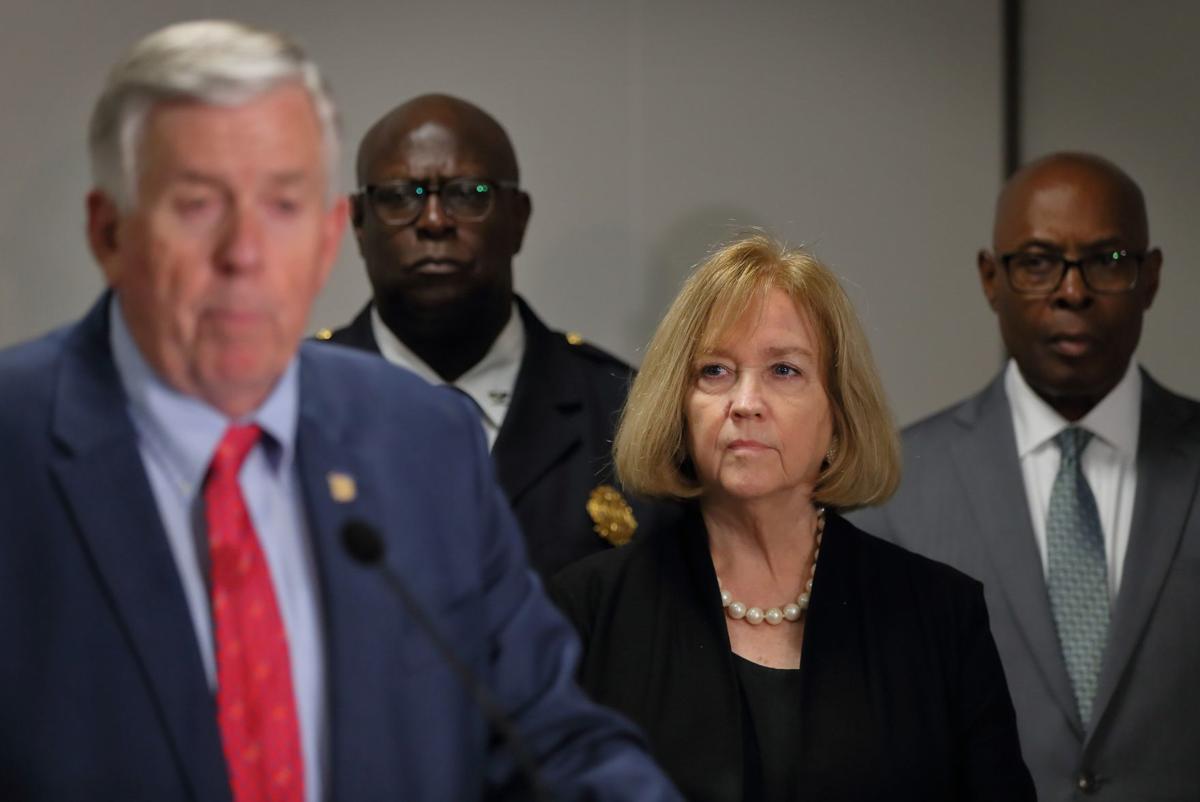 St. Louis mayor Lyda Krewson looks at Missouri Gov. Mike Parson during a press conference on Thursday, Sept. 19, 2019 where he announced plans to use the Missouri Highway Patrol to fight violent crime in the St. Louis region. Photo by David Carson, dcarson@post-dispatch.com 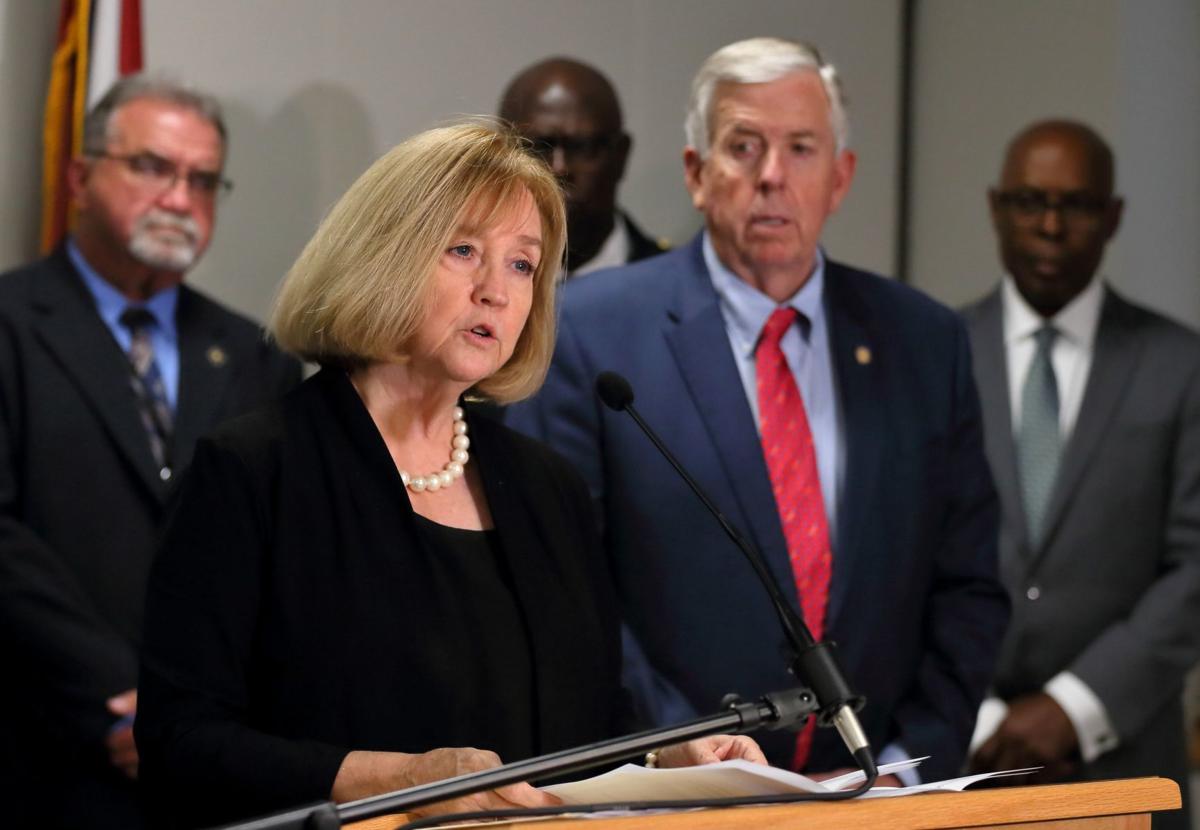 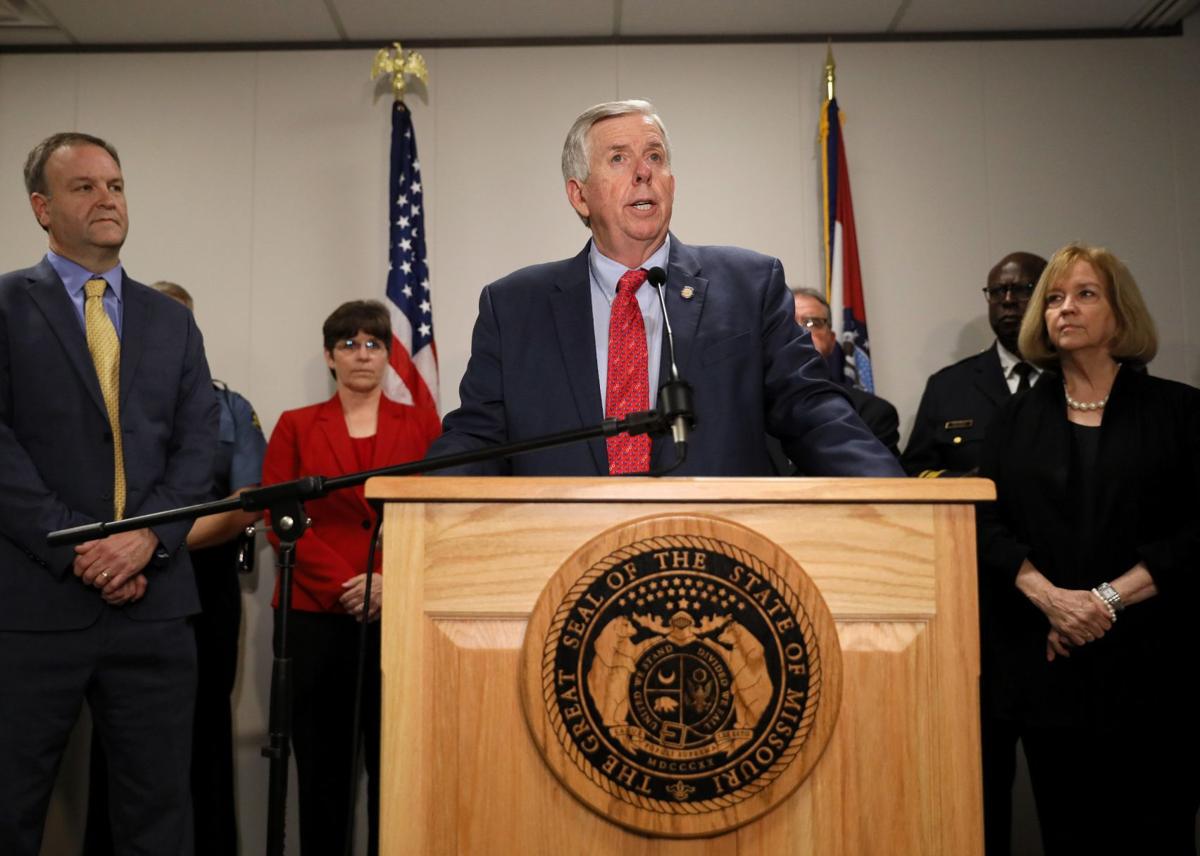 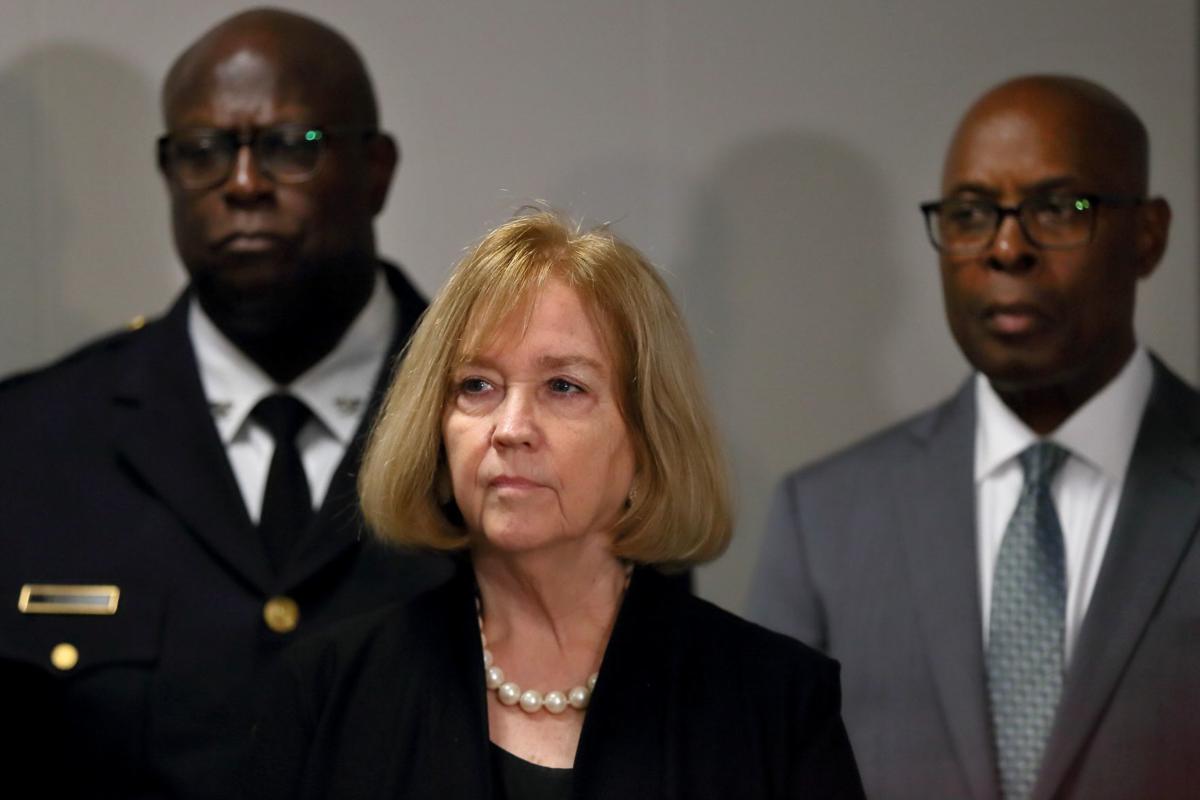 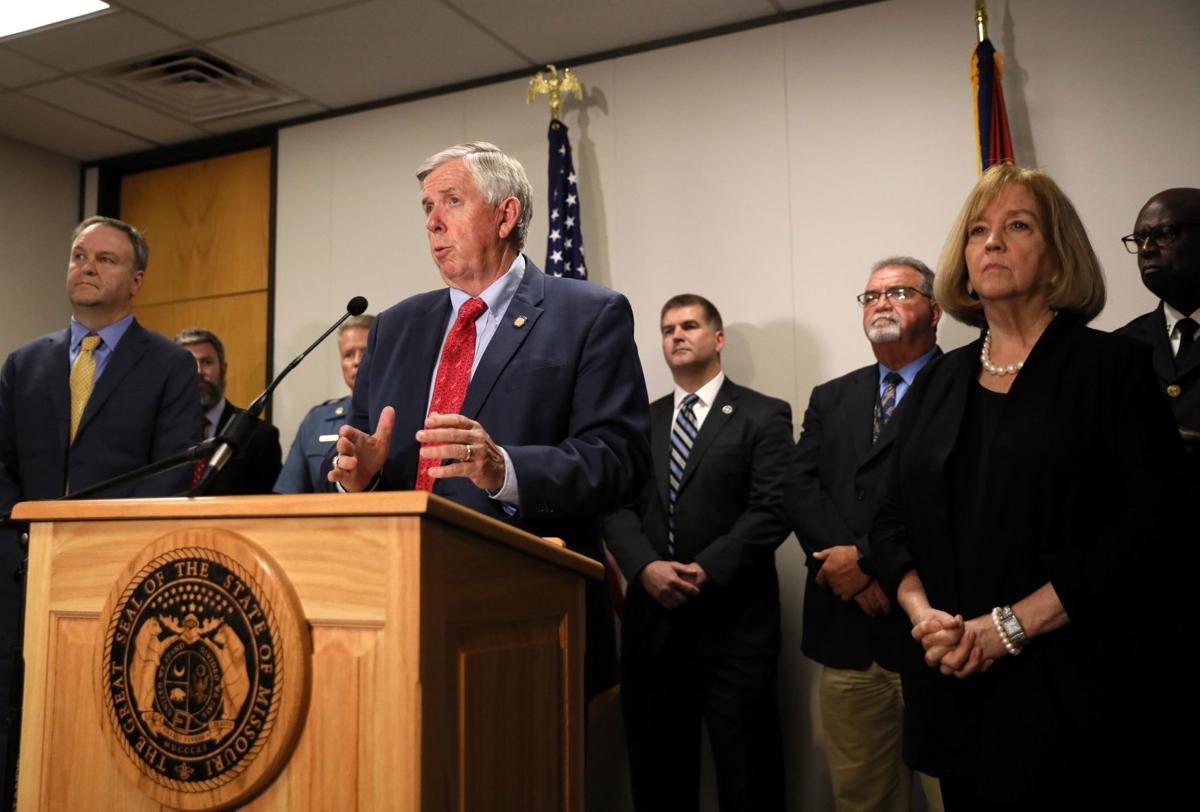 ST. LOUIS — Gov. Mike Parson announced Thursday that the state on Oct. 1 will begin deploying about 25 employees, many of them highway patrol troopers, “to get more boots on the ground” to try to help reduce violent crime in St. Louis.

Parson, at the end of a day of meetings with local officials and community leaders on the issue, also said about $2 million in additional state money will be channeled to the area to expand services to crime victims.

“None of us, no matter where we’re from, want to see our children being shot in the streets,” Parson, who is from the southwest Missouri town of Bolivar, said at a news conference at his downtown St. Louis office.

“That’s not who we are in this state.”

He said two troopers would be assigned to each of three existing special units led by federal agencies and which also include local police.

In addition, Parson said, the patrol would launch “surges” on interstate highways in St. Louis city, aimed at apprehending violent criminals and freeing up city police to deal with other high-crime areas.

The primary focus of the surges of four to six troopers, he said, would be on Interstate 70. But the patrol also will be assigned at different times to Interstates 55 and 44 and Highway 40 (Interstate 64) in the city.

“This is about targeting violent criminals and getting them off the streets,” Parson said. “It is not about minor traffic violations.”

Eric Olson, the highway patrol superintendent, said his agency would work with city police to determine the best periods for the surges, whether that be rush hour, evening or overnight periods.“We know the criminals utilize the interstate system to move around,” Olson said.

The special federal-local units getting patrol help will include a Bureau of Alcohol, Tobacco, Firearms and Explosives strike force and a U.S. Marshals Service task force aimed at capturing the most dangerous fugitives.

Also getting patrol help will be a task force that targets the most violent criminals and works on long-term drug investigations. A patrol cyber analyst also will be assigned there.

In addition, two more state investigators will be assigned to an existing unit dealing with federal gun and drug cases overseen by the U.S. attorney’s office here.

Parson also said state probation and parole officials are working with city police on “heightened supervision” for violent offenders. He also cited plans by St. Louis County to put more of its police on MetroLink in the city.

“It’s pretty good; we got a lot of what we asked for,” the mayor said. “But we all want more, right? I think it is a very good commitment by the governor.”

Page said the state plan is “going to be impactful” and “addresses crime head-on” and also helps crime victims.

“I fear it will end up being little more than a public relations campaign that produces few, if any, tangible results.”

Quade also said while shifting more resources to St. Louis is appropriate, “that does nothing for Kansas City or rural areas” affected by gun-related violence and suicides.

Parson reiterated his position that it’s up to the Missouri Legislature to decide if it wants to make any changes to state gun laws.

Parson said the commitment of state troopers to St. Louis isn’t permanent and how long it lasts will depend on its effectiveness. He said data “on what differences we made” will be analyzed, “regardless of whether it’s 90 days, six months or a year.”

He said the violent crime problem has been building here for decades with children recently becoming murder victims. “It’s important to know that this is not going to be fixed overnight,” he said.

Also Thursday, Krewson announced she had issued an executive order to set up a new city position of director of children, youth and families to mobilize public and private resources on the issue.

Wilford Pinkney, who had headed the mayor’s bail reform initiative, will assume the new post. She said she also will name a task force made up of elected officials, business leaders, representatives of nonprofit groups and others to help create an action plan.

Parson’s day here began with a stop at the Page Boulevard headquarters of Better Family Life, a social services organization that works to reduce violent crime as part of its mission. Some state legislators joined him there.

Later, he held separate closed-door meetings at the Wainwright State Office Building with local and federal prosecutors, members of the Metropolitan St. Louis Clergy Coalition and with Krewson, Page and local and state law enforcement officials.

Among those at the meeting with prosecutors were St. Louis Circuit Attorney Kimberly M. Gardner and County Prosecuting Attorney Wesley Bell.

Gardner and Bell had criticized not being invited to a similar meeting the governor held last week with Krewson, Page and other officials at St. Louis City Hall.

Bell said the separate session Thursday with prosecutors “was a step in the right direction.” Gardner also thanked Parson “for giving us the opportunity” to present their views.

The two told reporters they urged Parson to support their efforts in the Legislature next year to boost state aid to their offices. “Instead of looking ... at how much more law enforcement we can deploy, we need a better strategic funding of prosecutors’ offices,” Gardner said.

Gardner said state money is needed to help pay for relocation of crime witnesses and victims, and “to help kids deal with the trauma of loved ones who are killed or maimed in our community.”

Bell said they also discussed the need to step up the use of alternatives to jail for certain offenders, such as treatment programs.

Bell said the point was to seek state aid not just to address violent crime “but also root causes that lead to violent crime.”

Gardner said the two would back bills to that end in next year’s legislative session and urged Parson to support them as well.

St. Louis mayor Lyda Krewson looks at Missouri Gov. Mike Parson during a press conference on Thursday, Sept. 19, 2019 where he announced plans to use the Missouri Highway Patrol to fight violent crime in the St. Louis region. Photo by David Carson, dcarson@post-dispatch.com