'Pick me up,' Farmington fugitive whispers in phone call minutes before deadly shootout
0 comments
Share this
{{featured_button_text}}
1 of 3 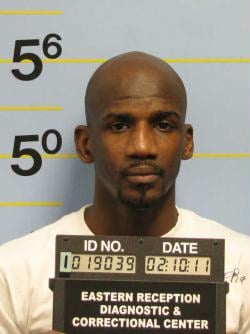 Callion Lance Hamblin in a Missouri Department of Corrections mugshot from February 2011. 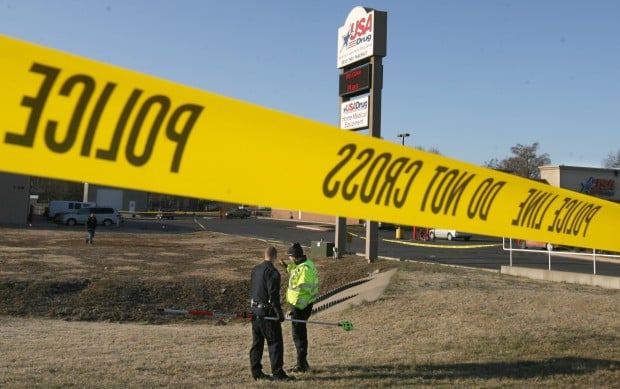 Police officers look over the scene where a man was shot and killed and a sheriff's deputy was wounded in a gunfight in Farmington on Monday, Feb. 20, 2012. Photo by David Carson, dcarson@post-dispatch.com 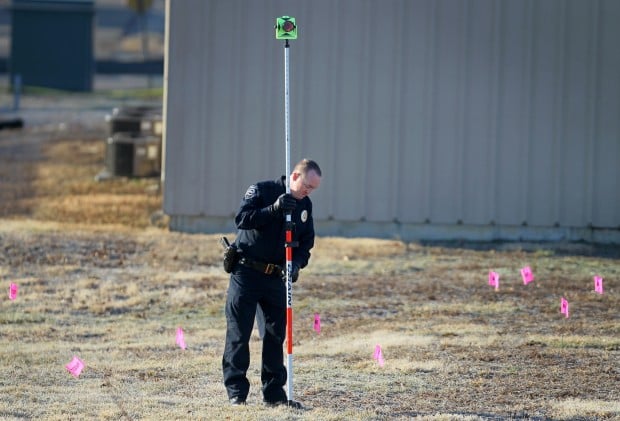 A police officer places a survey pole at the site of an evidence marker to map the scene where a man was shot and killed and a sheriff's deputy was wounded in a gunfight in Farmington on Monday, Feb. 20, 2012. Photo by David Carson, dcarson@post-dispatch.com

UPDATED at 3:15 p.m. with more from coroner and prosecuting attorney

FARMINGTON • Brandy Hamblin's ex-husband Callion L. Hamblin, who had been running from police and bounty hunters for nearly three weeks, called her shortly after 1 a.m. Monday and asked for her help.

She said she couldn't because their 11-year-old son was sleeping. He hung up, then called right back.

"They're shooting at me," he whispered again, then hung up for good.

Brandy Hamblin knew her ex-husband was a fugitive. He had skipped a court appearance in a drug case last month. Police had come to her home twice, and the bail bondsman who stood to lose $25,000 had paid her a visit as well.

Early Monday, after the second hangup, Brandy Hamblin said she texted Callion Hamblin's phone. "Please turn yourself in," she wrote. "Think about your kids."

About a half-hour later, Brandy Hamblin says, she heard the tail end of the manhunt and wild shootout a few blocks away that left Callion Hamblin dead and a sheriff's deputy wounded.

Her current boyfriend was on the back porch of her home and heard someone in the distance shout: "Get on the ground!" Brandy ran to the porch and heard the shots in the direction of Karsch Boulevard.

"I heard rapid gunfire," she said in an interview Tuesday. "It sounded like an ambush, like someone had lit a whole block of Black Cats (firecrackers)."

By 2 a.m. Monday, Callion Hamblin, 32, of Farmington was dead. He was shot to death after Farmington police, St. Francois County sheriff's deputies and the Missouri Highway Patrol swarmed a lot near the USA Drug Express on East Karsch Boulevard.

St. Francois County sheriff's Deputy Don Smith was shot in the leg. Smith was treated at Parkland Hospital and released.

The coroner, Jim Coplin, said an autopsy Tuesday morning revealed that Hamblin had been shot multiple times. Two of those gunshot wounds, to the torso and liver, could have been fatal, he said. Coplin declined to release further details until the Highway Patrol's investigation is complete.

It all began just after midnight Sunday when bail bondsmen from two companies went looking for Hamblin. He had skipped a Jan. 27 court date in a drug case. The bondsmen went to an apartment on Old Fredericktown Road and called police when he barricaded himself inside with a gun.

"He pointed the gun at us through the window," said Mike Cross, a bail bondsman. "We heard him jack the shell into the chamber. He was serious about getting away."

Brandy Hamblin, who divorced Callion Hamblin in 2008, can attest to that. She said he didn't like the deal the prosecutor was offering him in his latest drug case.

"They were offering him 14 years. He didn't want to go back to prison," she said.

Hamblin had been in and out of Missouri prisons at least a half dozen times since 2003 for offenses that include drug trafficking, possession of marijuana, assault and repeated parole violations, according to Chris Cline, spokesman for the Missouri Department Corrections. In all, he spent about four years in state prison. His most recent release was last August.

Cross, one of his agents and a collector for his bail bonding company were outside the apartment on Old Fredericktown Road. An agent for another company, Tim Tucker bail bonds, was there, too. None of the four fired any shots, Cross said.

Police arrived and saw Hamblin run off. He fired a shot as he fled, but didn't hit anyone, police said.

"He was ordered several times to drop the gun," Baker said. "He pointed the handgun at a deputy and was running toward the deputy."

That's what sparked the shootout. Police say Hamblin shot the deputy and was himself shot. Hamblin died at the scene. The Missouri Highway Patrol is investigating the case.

Cross, the bail bondsman, said he had been tracking Hamblin for about three weeks. He had posted $25,000 bail in one of Hamblin's drug cases. Tucker's agency had posted $20,000 bail in another case, the one for which he missed the January court date. Hamblin had several felonies pending in St. Francois County court. Those included heroin possession and Xanax possession and resisting arrest, said St. Francois County Prosecutor Jerrod Mahurin.

"Cal's pretty slick," Cross said. "He'd move every two or three days. We heard he was in Bonne Terre, then Fredericktown. We were told he was carrying a gun."

Cross said he wishes the manhunt had a different ending.

"It didn't have to be this way," he said. "We hate that a policeman got shot. I feel bad Callion chose to do what he did. It's a tough way to go."

Michael C. Murphy is accused of fatally shooting his girlfriend.

No one was injured in bizarre encounter.

Callion Lance Hamblin in a Missouri Department of Corrections mugshot from February 2011.

Police officers look over the scene where a man was shot and killed and a sheriff's deputy was wounded in a gunfight in Farmington on Monday, Feb. 20, 2012. Photo by David Carson, dcarson@post-dispatch.com

A police officer places a survey pole at the site of an evidence marker to map the scene where a man was shot and killed and a sheriff's deputy was wounded in a gunfight in Farmington on Monday, Feb. 20, 2012. Photo by David Carson, dcarson@post-dispatch.com