Police, demonstrators gearing up for Michael Brown anniversary weekend in Ferguson
0 comments
Share this
{{featured_button_text}}
1 of 3 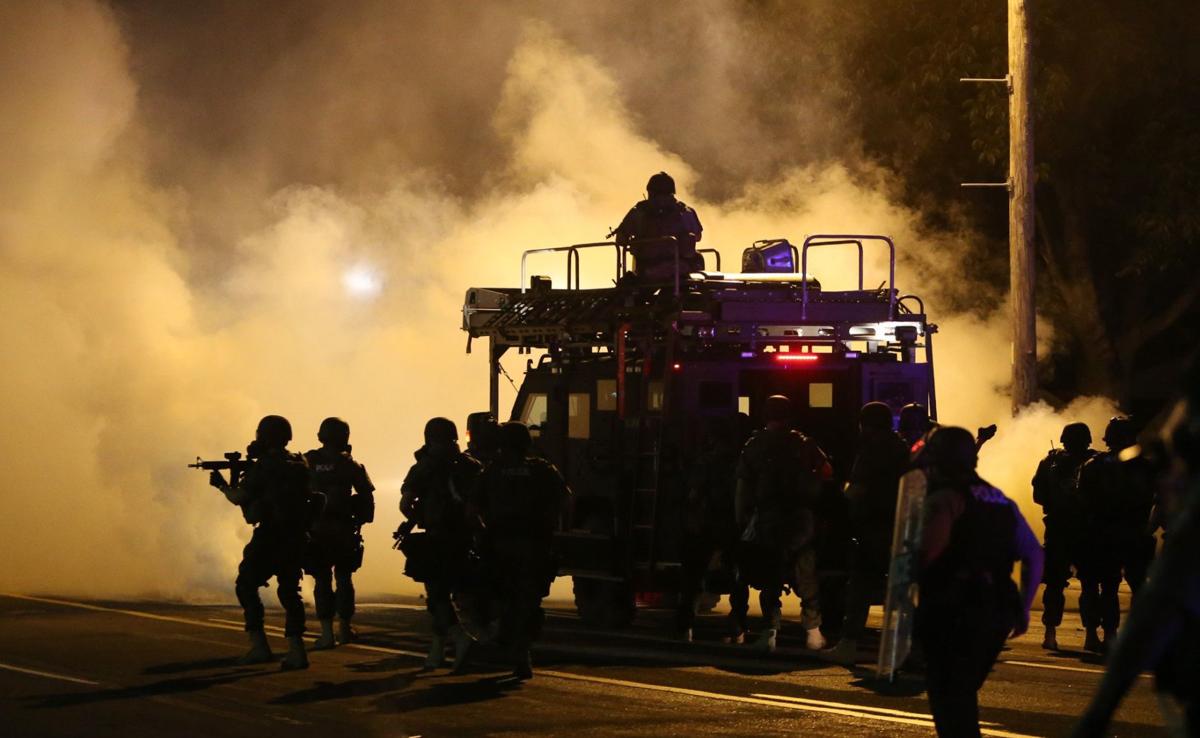 Tactical officers advance east on Chambers Road through clouds of tear gas as they try to clear protesters early on Wednesday, Aug. 13, 2014. It was the third night of unrest in the Ferguson area after the fatal police shooting of a teen on Saturday. Photo by Chris Lee, clee@post-dispatch.com 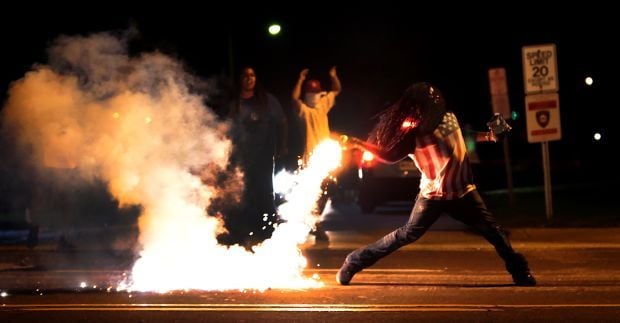 A demonstrator throws back a tear gas container after tactical officers worked to break up a group of bystanders on Chambers Road near West Florissant on Wednesday, Aug. 13, 2014. Photo by Robert Cohen, rcohen@post-dispatch.com 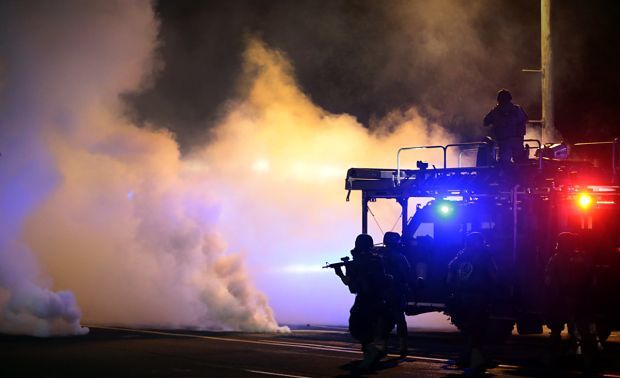 FERGUSON • Police commanders are expecting a peaceful weekend — and demonstrators are promising it. But authorities said Monday they would be prepared if the observance of the first anniversary of the controversial police killing of Michael Brown turned violent.

An organizer for a series of events characterized them at a press conference Monday as mainly “family-friendly, open to the public and free of charge.”

“The events we have planned this weekend are intended to show the strength of community, the value of self-empowerment and the power of the people,” said Nabeehah Azeez, of Missourians Organizing for Reform and Empowerment.

Azeez was joined by more than two dozen people from at least nine organizations at the Central West End offices for the Service Employees International Union. They called on police to respect the free speech rights of demonstrators and refrain from confronting protesters in a militarized manner.

Last year, police — confronted with taunts and thrown objects amid a backdrop of gunfire — used tear gas, armored vehicles, flash-bangs and other devices at times to control crowds protesting Brown’s death. The tactics drew criticism from the Department of Justice and others.

St. Louis County police Chief Jon Belmar said Monday that his priorities were to protect life, property and the expression of First Amendment rights, in that order.

“We have been fortunate thus far to not have a loss of life, that’s certainly our primary focus as we move into this to make sure these events honor the memory of Michael Brown and afford us the opportunity to move forward as a region and not take any steps backward,” the chief said.

“If nothing happens, there will be no reason to stage officers and equipment,” he said. “All of our activity will be predicated on that.”

Police do expect some roadway closures for protests, mostly in Ferguson. And they think some protesters may seek to interrupt retail areas on what is Missouri’s annual tax-free weekend for buying school supplies and clothing.

Azeez said she did not know how many people would attend the marches, concerts and demonstrations planned for Friday, Saturday and Sunday. But she said it was a historic moment that would undoubtedly include people from outside the St. Louis area.

On Monday, protesters are planning a day of “civil disobedience.” No one at the press conference would elaborate, but Azeez said it would not be “family-friendly.”

To help parents who want to participate in protests, organizers have established around-the-clock child care, she said.

Belmar told the county Board of Police Commissioners at a meeting July 15 that, “I’m not alarmed by any of the intelligence I’ve seen. I do not believe we will have any acute problems.”

He added, “I don’t believe it’s going to be anything like the grand jury announcement.” That was in reference to a night of rioting, looting and arson after a St. Louis County grand jury decided not to indict Ferguson Officer Darren Wilson in the shooting of Brown.

Mike O’Connell, a spokesman for the Department of Public Safety, did not make anyone from the Missouri Highway Patrol available for comment Monday. He issued a statement that said: “The Missouri State Highway Patrol would assist St. Louis County as needed/requested. As a general policy, the Patrol does not discuss staffing.”

Ferguson police and the FBI did not respond to requests for comment.

According to numerous sources and documents obtained by the Post-Dispatch, multiple agencies have made just-in-case preparations: The FBI will provide additional air support and extra bomb technicians as needed. St. Louis County’s Emergency Operations Command Center will be activated. The highway patrol and county police will assemble personnel and equipment near Ferguson and in Clayton.

Ferguson’s interim police chief, Andre Anderson, has asked that only his officers and equipment be visible in his community unless assistance is requested, according to sources. Belmar said Monday that he was in discussions with Anderson on the matter.

St. Louis police will remain in the city unless summoned. Time off this weekend was canceled for officers in specialized units, including traffic and the mobile reserve, but most officers remain on their usual eight-hour shifts, Chief Sam Dotson said.

“There is no intelligence to suggest that there is going to be anything except peaceful protest,” Dotson said. “We’ve been having conversations and dialogue to make sure the lines of communication are open if spontaneous events occur.”

County officers are scheduled for 12-hour shifts Friday through Tuesday, with days off canceled, Belmar said.

Anyone arrested in the protests anywhere in St. Louis County will be sent to the Justice Center in Clayton — a departure from last year’s protocol, in which they were jailed in various municipalities, with varying policies and bail procedures.

“This is so we understand the number of those arrested, who they are, what are the expectations of the family and friends who are going to pick them up,” Belmar said. “That way there is no haphazard approach to it versus what we’ve seen in the past.”

City police will handle their own arrests.

The committee chair says scheduling problems are to blame, but some suggest the group is motivated by politics.

A year later: The people, places and ideas from Ferguson

Tactical officers advance east on Chambers Road through clouds of tear gas as they try to clear protesters early on Wednesday, Aug. 13, 2014. It was the third night of unrest in the Ferguson area after the fatal police shooting of a teen on Saturday. Photo by Chris Lee, clee@post-dispatch.com

A demonstrator throws back a tear gas container after tactical officers worked to break up a group of bystanders on Chambers Road near West Florissant on Wednesday, Aug. 13, 2014. Photo by Robert Cohen, rcohen@post-dispatch.com