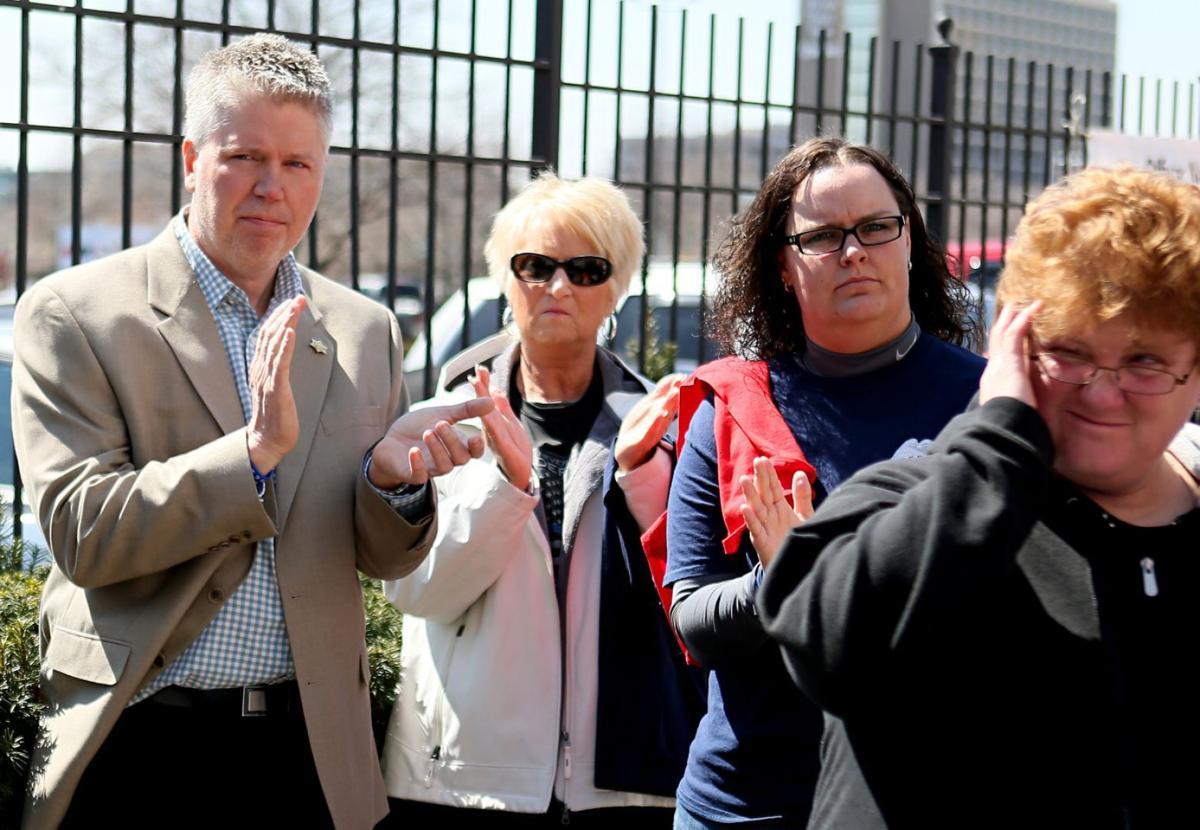 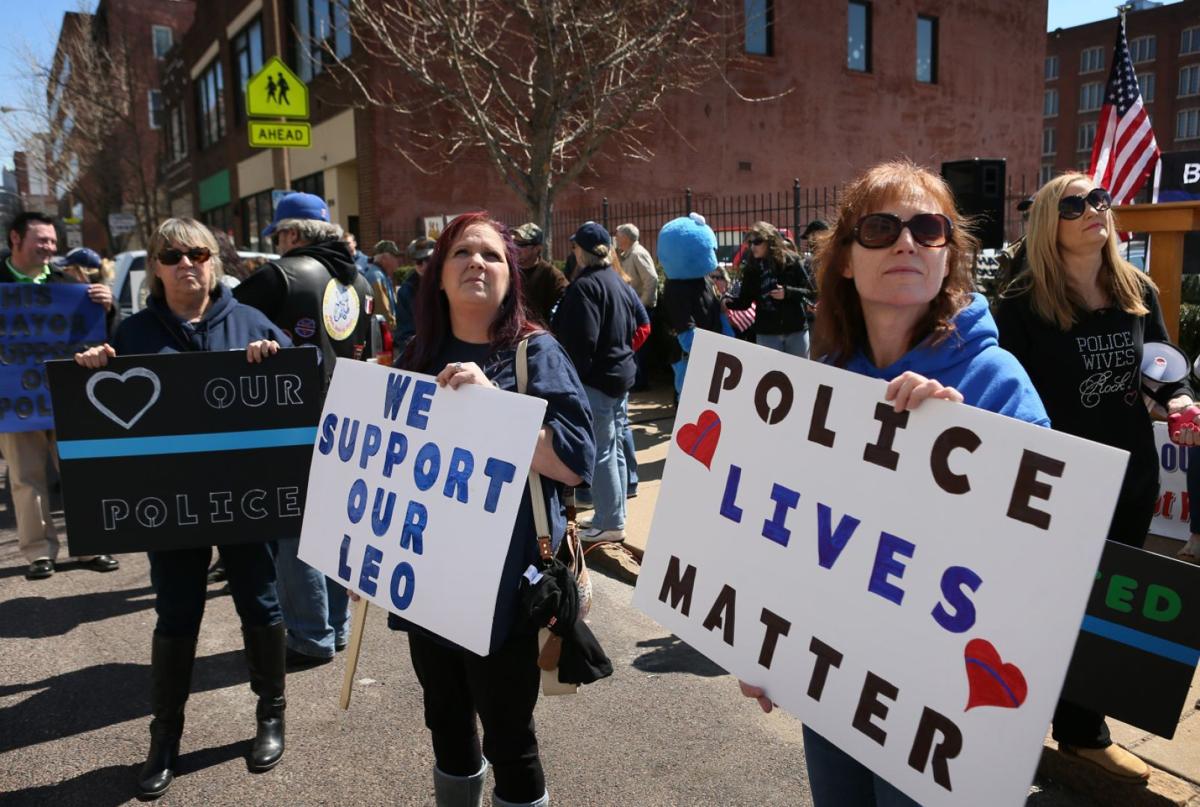 Cathy Brown (left), Marylin Borsenberger, and Lisa Tiedtke take part in a rally in support of police outside the St. Louis police headquarters on Olive Street in St. Louis on Saturday, March 28, 2015. Brown and Tiedtke are from St. Charles, Borsenberger is from O'Fallon, Mo. Photo By David Carson, dcarson@post-dispatch.com

ST. LOUIS   •   At a pro-police rally Saturday, a St. Louis police union representative called Department of Justice investigators "a band of marauders" who helped perpetrate a lie in Ferguson.

In a 10-minute speech, Roorda said the Department of Justice report that found systemic racism within Ferguson's police and court operations was intended to distract from another report by the agency that found Ferguson Police Officer Darren Wilson was justified in using deadly force against Michael Brown.

"(U.S. Attorney General) Eric Holder, who wanted with every fiber of his being to find some wrongdoing on the part of Darren Wilson, sics his justice department on St. Louis," Roorda said. "They raid St. Louis like a band of marauders...

"What do they find? They find that this hands up don't shoot myth was just that — a fiction that was perpetrated upon the people of Ferguson, the people of Missouri and the people of the world," he said.

But instead of setting the record straight, Roorda said, Holder and his civil rights team "leak out the most damaging nuggets from this other report about this horrible practice of writing tickets.

"Police departments writing tickets. Can you imagine?!?" Roorda asked mockingly, as a crowd of about 75 police supporters hooted in the background.

"It's a big lie and it was used to bury the truth about Darren Wilson and what happened that day on Aug. 9 in Ferguson and that was ... a young black man made a terrible mistake," he said.

The two DOJ investigations put Ferguson back into the international spotlight and fallout from the more critical report sent six city officials packing.

Civil rights investigators found police disproportionately stopped African-Americans without reasonable suspicion, made arrests with no probable cause, and used force disproportionately against blacks. It said the municipal courts were focused more on revenue collection than safety, creating a special hardship for the poor.

Together, the report said, the police and courts helped feed a mistrust of authorities that bubbled over after the shooting of Brown, an unarmed teenager who reportedly struggled with Wilson, forcing him to draw his weapon.

"We now pretend, 'Oh, it was never about the shooting, it was about the mistreatment of people by the Ferguson police department," Roorda said. "Give me a break. People weren't marching in the streets saying 'hands up, don't write me a ticket and don't arrest me when I don't show up to court.' They were saying, 'hands up don't shoot.'"

In February, a melee broke out at a public meeting discussing civilian review of St. Louis police after Roorda wore an "I am Darren Wilson" bracelet. As a result, he was sidelined as spokesman for the union on that issue.

Republican Lt. Gov. Peter Kinder, also at the rally, called on citizens to unite in support of police, who black and white have been shot in the line of duty.

His comments were tempered from those he made earlier this month on the conservative news outlet Newsmax TV. In that interview, Kinder said President Barack Obama and Holder had joined in "incitement of the mob" and "encouraging disorder in Ferguson." He later told the Associated Press that the justice department was "staffed with Marxists and black radicals" and responsible for "fanning the flames of racial division" in the wake of the Ferguson shooting.

The rally Saturday was one of several hosted by a group of citizens who formed on Facebook to support law enforcement. Trish Dennison, one of the organizers from Alhambro, Ill., said the goal was to demonstrate support of police but not to be divisive.

Public hearing on civilian review board for St. Louis police erupts in chaos

Crowd became unsettled when police officers began testifying in opposition to the bill.

Cathy Brown (left), Marylin Borsenberger, and Lisa Tiedtke take part in a rally in support of police outside the St. Louis police headquarters on Olive Street in St. Louis on Saturday, March 28, 2015. Brown and Tiedtke are from St. Charles, Borsenberger is from O'Fallon, Mo. Photo By David Carson, dcarson@post-dispatch.com