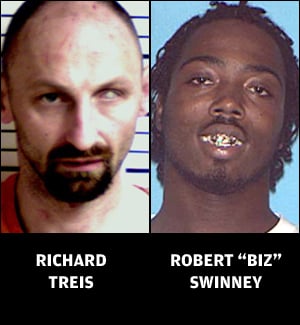 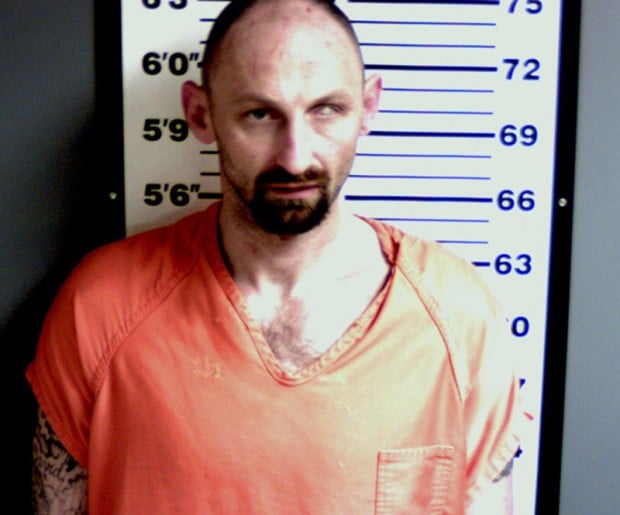 Richard Treis in a photo provided by authorities. 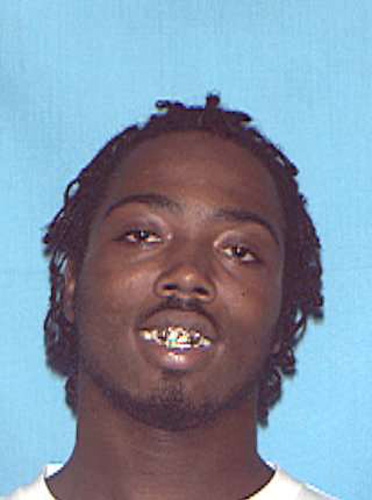 Robert "Biz" Swinney, in a photo provided by authorities.

ST. LOUIS • Making methamphetamine also can make strange bedfellows, police said after federal charges revealed an alliance between what they describe as a white supremacist and a black inner-city gang member.

The partnership blossomed when Richard Treis met an associate of Robert "Biz" Swinney's at a halfway house in St. Louis, investigators said.

Treis, 38, joined the Aryan Nations while in a federal penitentiary for meth-related crimes, according to Franklin County officials and the Drug Enforcement Administration. They said Swinney, 22, is a documented gang member.

"It was all about the money," said Franklin County sheriff's Cpl. Scott Briggs. "They put away their differences to get the job done."

Some officials say the case illustrates why decongestants containing pseudoephedrine should require prescriptions. But that position remains controversial, as the pharmaceutical industry touts purchase limits it says have blocked thousands of illegal sales of the drug from which methamphetamine is produced.

Police said Swinney had to mobilize at least 150 people over 24 months to comply with purchase restrictions while buying enough decongestants to support the needs of meth cooks like Treis.

Swinney recruited relatives, gang members, homeless people and random others, Briggs said. "Just about every day, they were standing outside of stores handing out $20 bills asking people to buy a $10 box and keep the change."

The investigator said Swinney sold to Treis and others at $50 to $80 a box. Swinney told police he lived off of the money for the last two years.

"The magnitude of it impressed us," Briggs said. "At first, we were shaking our heads like, 'No, this isn't going on,' because we hadn't seen people that could get their hands on 20 to 30 boxes at a time since 2006."

"It seemed like it was well-known that, if you want pills, you go to the city," Briggs said. "It exploded once the word got out."

Briggs said Swinney told investigators he was just one of many city residents forging partnerships with rural Missouri meth cooks.

The other defendants named in the recent indictment, in U.S. District Court in St. Louis, were Chance Ziegler, 35, and Bodette Algiere, 31, both of the St. Clair area; Joseph McNamara, 26, of St. Louis; and Shannon Stephens, 26, and Sharon McGraw, 55, both believed to live in Franklin and Jefferson counties.

John Stobbs, the lawyer for Stephens, called it "a case where she got caught up with the wrong crowd." Lawyers for the others could not be reached.

Tim Whitney, commander of Jefferson County's narcotics unit, said unusual partnerships are becoming usual. He said it's not always known whether the groups involve white or black gangs, but "these are certainly groups of people that you typically wouldn't find in the same room hanging out together."

Jefferson County officers are averaging more than one meth lab raid a day so far in 2012, with 50 as of Thursday. That's a pace that might put 2012 ahead of years in the mid-2000s, before the purchase limits.

An effort to give pseudoephedrine a prescription-only status in Missouri received support last year from Gov. Jay Nixon and passed the House but died in the Senate. No such legislation has yet been filed this year.

The Consumer Healthcare Products Association, speaking for pharmaceutical companies, insists it is unfair to make law-abiding citizens pay a doctor for a prescription to treat a simple cold. The organization does back proposed legislation to reduce the state's purchase limits — and require prescriptions for felons.

Federal law permits purchase of 9 grams in a 30-day period and 108 grams a year. A pending bill would drop those to 7.5 and 75 grams, respectively.

Grellner said limits and requiring prescriptions of felons only have failed in other states. He supports a blanket prescription requirement and said southeastern Missouri counties with such a rule have seen known meth labs decline up to 60 percent.

Data from the National Precursor Log Exchange show that Missouri's restrictions blocked sale of more than 49,000 boxes of pseudoephedrine in 2011. That's "ample proof that NPLEx is keeping pseudoephedrine out of the hands of criminals," according to a statement by Charles Cichon, executive director of the National Association of Drug Diversion Investigators.

But Grellner said the latest case shows how criminals can enlist buyers to circumvent the limits. He said the data show that just 30 stores represent more than 20 percent of the state's pseudoephedrine sales, and that they are in or next to the top eight counties for meth labs.

The Associated Press and Robert Patrick of the Post-Dispatch contributed to this report.

EDITOR'S NOTE: An earlier version of this story had an incorrect spelling of Richard Treis' name. This version has been corrected.

Missouri meth lab busts up in 2011, in St. Louis six-fold

The bust was one of three made on the same day for the same ring, officials say

They are discussing proposed law to require prescriptions for drugs containing pseudoephedrine.

Four people have been charged.

21 from Franklin and Jefferson counties indicted on meth charges

They are accused of running a meth-making network.

Delay is the longest in recent memory at the crime lab.

On Aug. 30, the county began requiring prescriptions for the products.

Prescriptions are required for cold and allergy medications containing pseudoephedrine.

The patented technology, owned by Highland Pharmaceuticals LLC, is designed to make it extremely difficult to extract pseudoephedrine.

Officials want a joint push to require prescriptions for pseudoephedrine.

Richard Treis in a photo provided by authorities.

Robert "Biz" Swinney, in a photo provided by authorities.