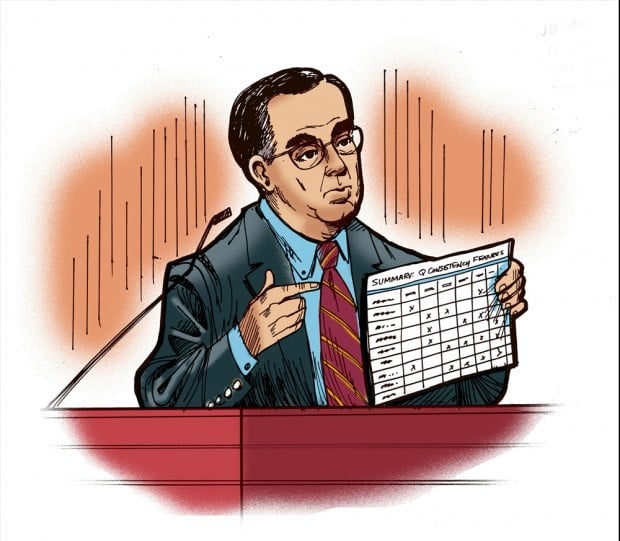 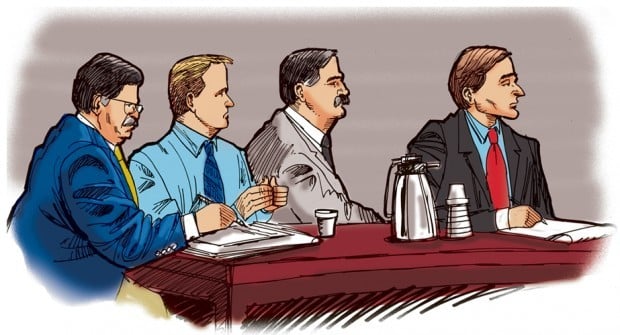 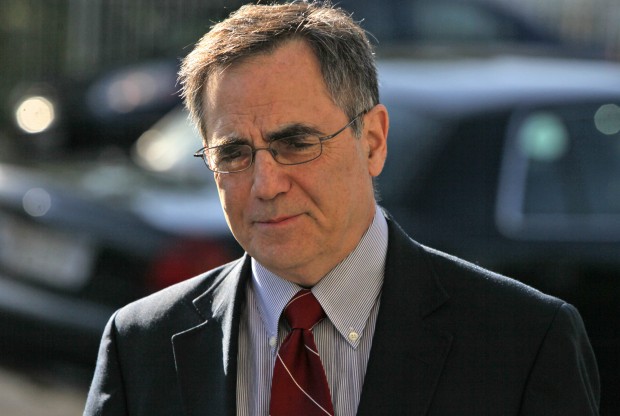 May 3, 2011--The Christopher Coleman triple murder trial heads into its second week. Robert Leonard, Ph.D. a linguistics expert from New York's Hofstra University arrives at the Monroe County Courthouse in Waterloo on Tuesday. Leonard specializes in forensic linguistics as applied to U.S. law. Coleman is accused of killing his wife and two sons. Dawn Majors dmajors@post-dispatch.com 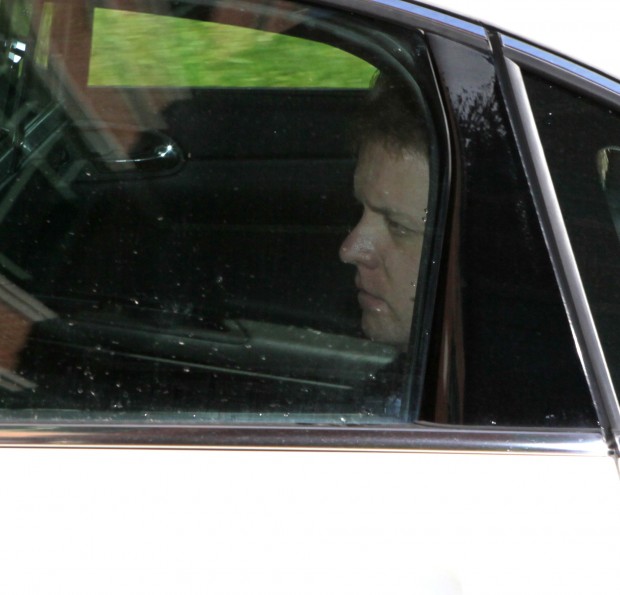 May 3, 2011-- Christopher Coleman arrives at the courthouse in Waterloo for day seven of his triple murder trial on Tuesday. Dawn Majors dmajors@post-dispatch.com
BY NICHOLAS J.C. PISTOR • > 314-340-8265

WATERLOO • Prosecutors wrapped up their evidence against Christopher Coleman on Tuesday by suggesting that murder trial jurors read the writing on the wall — literally.

He bought red paint that matched menacing messages left on walls of his home by the killer of his wife and two sons, one expert witness testified. The writing is similar to Coleman's, said another.

On the seventh day of testimony, Monroe County State's Attorney Kris Reitz said his evidence was complete. Circuit Judge Milton Wharton told jurors the defense expects to use only half a day, leading to the possibility of closing arguments by this afternoon and possibly a verdict today.

It was not clear whether Coleman, 34, who could be sentenced to death if convicted, will testify.

The spray-painted declarations at the house in Columbia, Ill., took center stage as Reitz tried to drive home his belief that Coleman planned the murders for six months, leaving clues calculated to divert detectives' attention when the time came for killing.

Instead, those clues became central to the prosecution's case against him.

Karla Heine, a Columbia police officer, testified Tuesday that Coleman bought a can of apple red Rust-Oleum spray paint at the Handyman True Value at 5405 Telegraph Road in south St. Louis County on Feb. 9, 2009, about three months before the bodies of Sheri Coleman, 31, and sons, Garett, 11, and Gavin, 9, were found that May 5.

Its formula was matched by paint experts to taunting messages scrawled on the walls.

Lindell Moore, a forensic scientist and document examiner for the Illinois State Police, testified that there are 'significant similarities" between the sprayed messages and Coleman's own handwriting. But Moore also noted some differences, and said he could not definitively say the graffiti was the work of Coleman's hand.

Comparing normal writing with spray-painted words is difficult, Moore explained. "It's an awkward and unnatural way of writing."

That writing included words and phrases such as "punished" and "I saw you leave, (obscenity) you, I am always watching."

Prosecutors allege that Coleman strangled his family so he could be with his mistress without exposing himself to adultery that could have cost him his $100,000-a-year security job with televangelist Joyce Meyer.

As far back as November 2008 — about the time his affair began — he reported receiving threatening emails and notes in his mailbox, directed at his work for Meyer. "Tell Joyce to stop preaching [expletive] or Chris's family will die," warned one. Another said; "I will kill them all as they sleep."

Marcus Rogers, a professor of computer forensics at Purdue University, testified that digital clues show someone turned on Coleman's own laptop computer, logged in under his user name and sent the messages under an anonymous Gmail account. Prosecutors claim it could only be Coleman.

Robert Leonard, a linguistics professor at Hofstra University, testified Tuesday that there are similarities between the threats and the wall writings. Both used the phrases "I'm always watching" and "I saw you leave." And he said they had similarities to Coleman's known writing.

Linguistic testimony is controversial. Defense lawyer John O'Gara noted that the FBI has declined to issue an opinion on its use as evidence. The defense is expected to call its own linguistic expert today to dispute the prosecution's conclusions.

O'Gara objected when Leonard began to describe the personal nature and level of "doom" behind the wall writing: "U have paid."

Before his study of linguistics, Leonard was a founding member of the rock band Sha Na Na, which played at the famous Woodstock music festival in 1969.

O'Gara brought laughter to the courtroom when he asked Leonard about the use of "brown acid," a reference to warnings made from the Woodstock stage about the effects of LSD circulating in the crowd.

"The reason I'm here is I've never touched that," Leonard joked. He added: "I'm under oath."

Coleman jury done deliberating for the night, will return tomorrow

Jurors met for several hours Wednesday without reaching a decision on whether Christopher Coleman strangled his wife and two sons.

Take an interactive look at the Coleman homicide investigation and trial.

Sketches: Inside the courtroom at Coleman trial

Nearly two years after Sheri Coleman and her two sons were strangled, Christopher Coleman goes on trial for killing his wife and children.See …

May 3, 2011--The Christopher Coleman triple murder trial heads into its second week. Robert Leonard, Ph.D. a linguistics expert from New York's Hofstra University arrives at the Monroe County Courthouse in Waterloo on Tuesday. Leonard specializes in forensic linguistics as applied to U.S. law. Coleman is accused of killing his wife and two sons. Dawn Majors dmajors@post-dispatch.com

May 3, 2011-- Christopher Coleman arrives at the courthouse in Waterloo for day seven of his triple murder trial on Tuesday. Dawn Majors dmajors@post-dispatch.com
© Copyright 2021 STLtoday.com, 901 N. 10th St. St. Louis, MO | Terms of Use | Privacy Policy
Powered by BLOX Content Management System from TownNews.com.
You don't have any notifications.