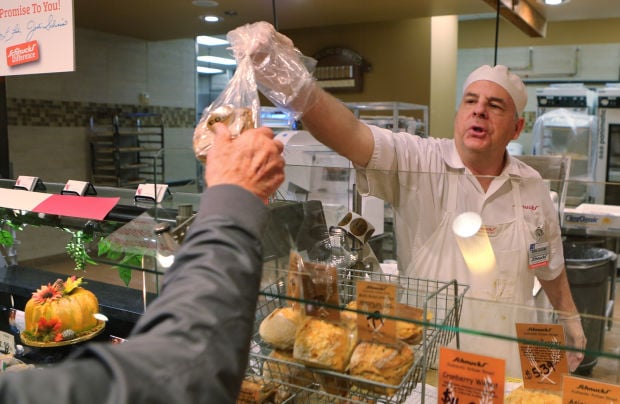 Baker Bob Jacobs sells bread to a customer at the Schnucks in Des Peres on Tuesday, Oct. 22, 2013. Photo by J.B. Forbes, jforbes@post-dispatch.com 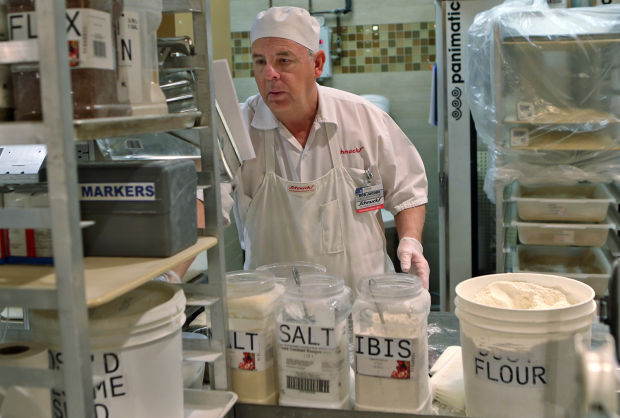 Baker Bob Jacobs prepares dough for cooking into loaves of bread at the Schnucks in Des Peres on Tuesday, Oct. 22, 2013. Photo by J.B. Forbes, jforbes@post-dispatch.com 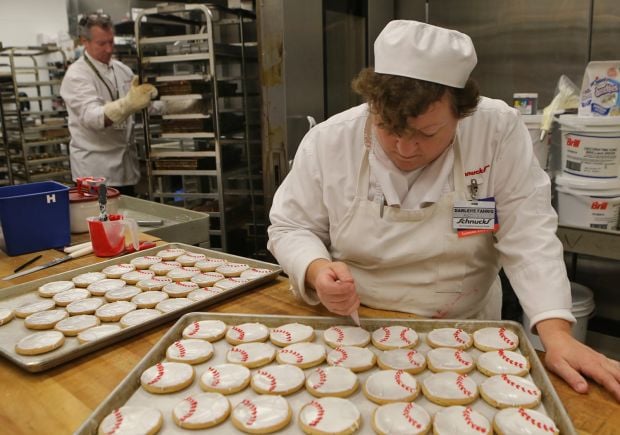 At the Clayton Road Schnucks in Richmond Heights, shoppers are greeted with a giant wall of baked goods in the southwest corner of the store: bagels, cinnamon rolls, Long Johns, as well as cake, glazed and filled doughnuts.

Small pink signs inform shoppers that the baked goods on display behind glass doors are all made fresh, that day, in the store.

Shoppers, of course, get no explanation of how the items are actually made. But exactly how the grocery chain mixes, shapes and heats the array of rolls, pastries, bread and pies on the sales floor is among the issues in a case to be argued today before Missouri’s highest court.

The legal dispute stems from a decision by the Missouri Department of Revenue to deny Schnuck Markets’ request for a refund of sales taxes on electricity and natural gas purchases — a decision upheld by the Missouri Administrative Hearing Commission. And the stakes are greater than you might expect.

Schnucks is seeking a refund of $106,000 in utility sales tax paid from 2007 to 2009 for energy consumed in the bakery departments at its Missouri stores. Another appeal by Schnucks for $225,000 in tax payments is being held in abeyance while the Supreme Court case is pending. And Dierbergs Markets Inc. and Companion Bakery, which were also turned down by the Department of Revenue for tax refunds of $170,000 and $4,700, respectively, currently have appeals pending before the Administrative Hearing Commission.

The tax breaks that Schnucks seeks to take advantage of were authorized in 2007 by Senate Bill 30, a measure aimed at improving the competitiveness of manufacturing in the state.

Specifically, the bill broadly authorized a sales tax exemption for utilities, chemicals, machinery, equipment and materials used in the manufacturing, processing, compounding, mining or production of a product or research and development related to manufacturing.

Regulations developed a year later by the Department of Revenue cited specific examples of activities that would constitute “processing” under the statute. Among them: a bakery that “creates baked goods for sale directly to the public or through retailers.” However, a restaurant that prepares food for immediate consumption is not exempt.

The rules seemed clear-cut to Schnucks, which learned about the tax break from an energy consultant and was surprised when its refund claims were turned down. The retailer said the issue is one of “fundamental fairness.”

“The essence of the Schnucks position is that the Department of Revenue should adhere to its regulation unless or until its modified,” said Erwin Switzer, a St. Louis lawyer representing Schnucks in the case.

A Department of Revenue spokeswoman didn’t answer questions about the case and referred the Post-Dispatch to the Supreme Court briefs, which include a novel debate about precisely what goes on at Schnucks in-store bakeries and whether it constitutes “processing” for the sake of a sales tax exemption.

In the court filings, the grocer and the state devote numerous pages to detailed, often-conflicting descriptions of what actually happens at Schnucks in-store bakeries. (Not part of the case is the central bakery the retailer operates near Page Ave. and Interstate 170.)

Jeremiah Morgan, deputy solicitor general for Missouri, which is defending the Department of Revenue’s decision, argues that Schnucks stores are merely reheating pre-made or frozen dough.

“As Schnucks would have the court read (the law), apparently every citizen of Missouri who bakes or prepares food, cookies and bread is ‘processing’ and therefore exempt on purchases of electricity, materials and equipment used in preparing meals,” Morgan wrote.

Schnucks takes a different view of the bakery operations at its Missouri stores, noting that most of its baked goods “begin as hard frozen chunks of raw dough that clank when they hit a table.”

Ameren Missouri, not Schnucks, is actually the named party in the case. That’s because the utility is the entity that collects and remits taxes to the state. A Schnucks spokesman said the retailer is actually paying the legal bills.

The exemption being sought would specifically cover state sales taxes on electricity consumed for the portion of Schnucks stores where baked goods are produced, as authorized by the Department of Revenue.

The utility sales tax refund case isn’t the first to be heard by the Missouri Supreme Court. In fact, the court issued an opinion last year in a similar case involving two convenience stores in western Missouri. And that ruling looms large in this dispute.

That’s because the state administrative commission relied heavily on the Casey’s decision when it denied the refund to Schnucks.

In the Casey’s decision, the retailer sought a $130 refund for sales taxes on for a month’s worth of electricity used at two Kansas City-area stores for the preparation of items, including cake doughnuts and mini pizza bites. But the court ruled that the “Legislature did not intend the term ‘processing’ to include retail food preparation.”

In the Schnucks case, the administrative commission agreed that the in-store bakeries were indeed bakeries for the purpose of the tax exemption. But the panel denied the retailer’s claim based on the outcome in the Casey’s case.

“We do not see how (Schnucks) has sufficiently distinguished the bakery departments’ food preparation procedure from that of Casey’s,” the commission said in a 15-page decision.

But Schnucks argues otherwise, noting in its court brief: “There is no contention or evidence that Schnucks bakeries are restaurants.”

Schnucks bakers at work, a lot of dough at stake

Schnucks and other artisan bakeries in the area are at the center of a legal dispute involving tax breaks.

Schnucks corporate employee charged with stealing more than $111,000 from account

She worked in accounting department.

Baker Bob Jacobs sells bread to a customer at the Schnucks in Des Peres on Tuesday, Oct. 22, 2013. Photo by J.B. Forbes, jforbes@post-dispatch.com

Baker Bob Jacobs prepares dough for cooking into loaves of bread at the Schnucks in Des Peres on Tuesday, Oct. 22, 2013. Photo by J.B. Forbes, jforbes@post-dispatch.com