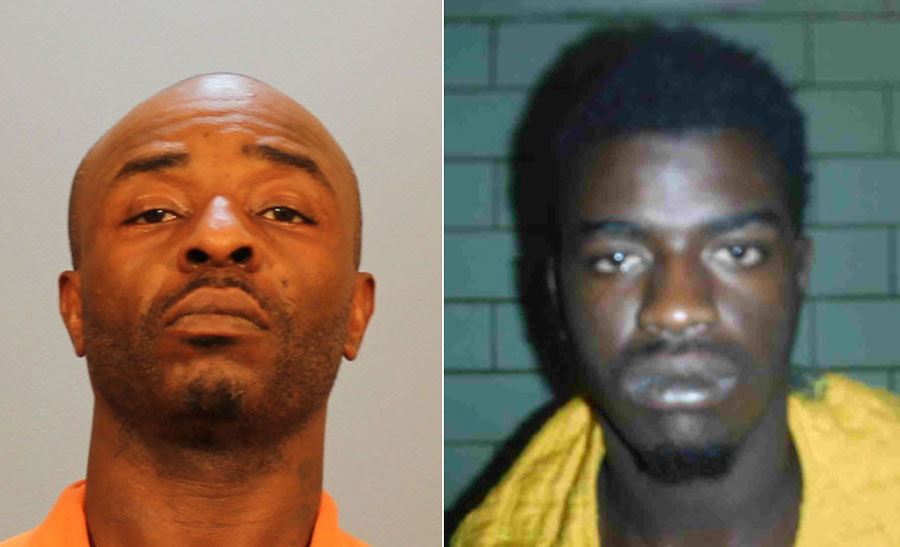 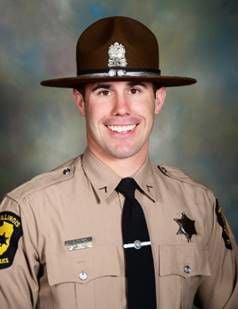 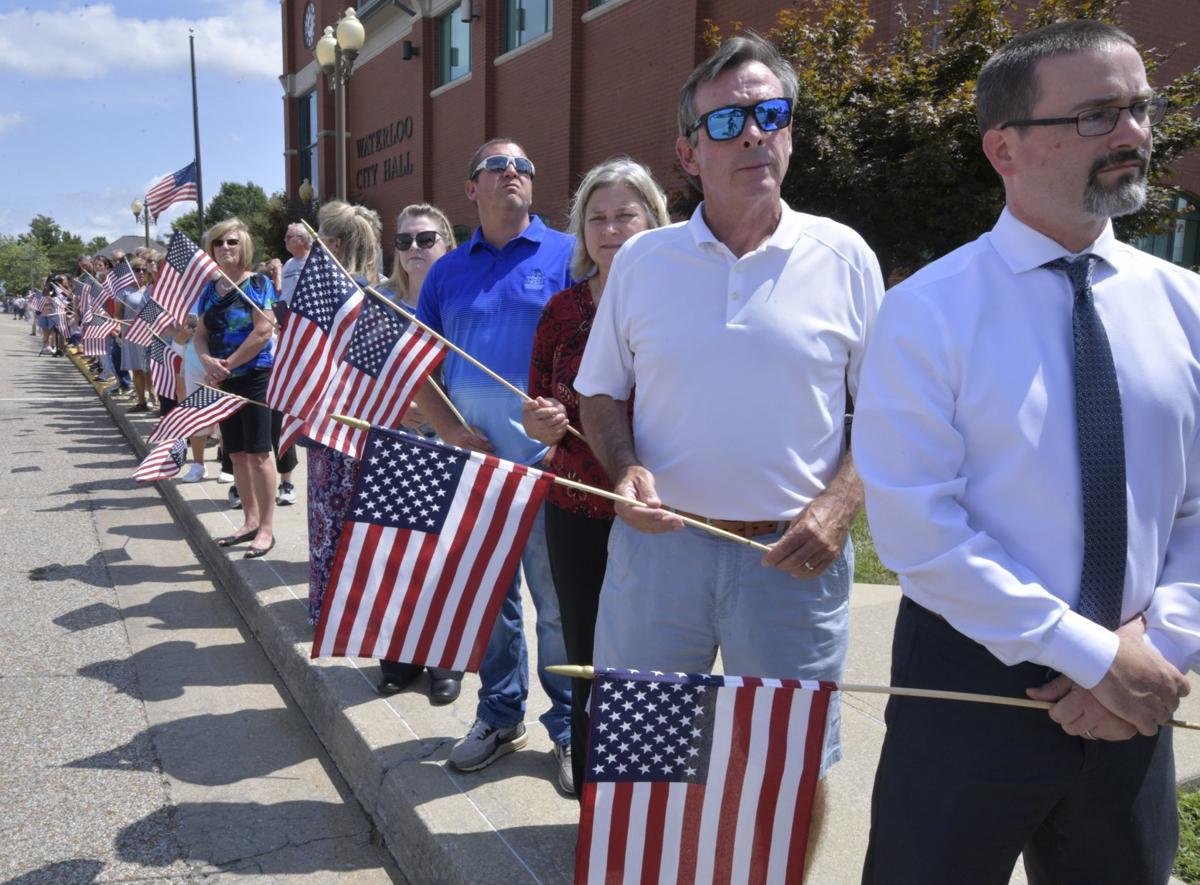 Waterloo residents line up outside Waterloo City Hall as they wait and watch for the procession carrying the body of slain Illinois State Police Trooper Nick Hopkins. Dozens of police departments joined in the procession from St. Louis to Waterloo on Monday, Aug. 26, 2019. Photo by Tim Vizer

BELLEVILLE — A second man was charged Monday in connection with the death of Illinois State Police Trooper Nick Hopkins, even as more information came out regarding the criminal past of Christopher R. Grant, charged with fatally shooting Hopkins last week.

The St. Clair County state’s attorney said Al Stewart Jr., 19, hid a .40-caliber Glock handgun after the shooting and possessed marijuana with the intent to distribute.

Hopkins, 33, of Waterloo, was fatally shot about 5:30 a.m. Friday in an exchange of gunfire as an Illinois State Police SWAT team executed a search warrant at a duplex in the 1400 block of North 42nd Street in East St. Louis.

Stewart and Grant both lived at the duplex. They are the first two charged of three arrested on Friday.

Grant, 45, has a criminal record in St. Clair County that includes drug possession in Belleville in 2003 and 2005, being a felon in possession of a gun and obstructing justice in 1996, and resisting or obstructing a peace officer in Washington Park in 1995. One of the crimes involved Grant selling cocaine to an undercover agent near a school in Belleville in 2003. He pleaded guilty and was sentenced to four years in prison.

Grant was arraigned Monday on first-degree murder charges before Judge John O’Gara, and was being held in the St. Clair County Jail in lieu of $5 million bail. The state’s attorney announced charges against him on Saturday alleging Grant shot Hopkins “with the intent to kill or do great bodily harm.”

Stewart was charged Monday with armed violence, obstructing justice and possession with the intent to distribute cannabis.

Hopkins was married, had three young children and had been a trooper for 10 years.

On Monday, his family released funeral arrangements and a lengthy statement expressing sorrow over his loss and thanks to his community.

“Nick was a son, brother, nephew, uncle, cousin, friend, carpenter, and trooper, but the job he loved most was being a husband and father,” the family said.

They thanked dozens of people including the city of Waterloo, the Illinois State Police SWAT team, law enforcement agencies across the area, Life Community Church in Columbia, Illinois, and the medical staff at St. Louis University Hospital, where Hopkins was treated after the shooting.

“There are so many others we want to thank, including those names we never learned,” the family continued in the statement. “Know that your kindness and support has not gone unnoticed, your actions are imprinted on our hearts forever.”

The visitation is scheduled for 3 to 9 p.m. Saturday at Waterloo High School, 505 East Bulldog in Waterloo. A funeral is set for 10 a.m. Sunday at the high school. Internment arrangements were pending.

Watson said there are two legitimate fundraisers for the fallen officer’s family. One is BackStoppers. The other is through the Illinois State Police Heritage Foundation.

Contributions can be made to the Heritage Foundation online at www.isphf.org/donations. Donors should write “Trooper Nick Hopkins Memorial Fund” in the comment section. Donations can also be sent to the foundation by mail at P.O. Box 8168, Springfield, Illinois, 62791.

Officer was shot while executing a warrant in East St. Louis

Waterloo residents line up outside Waterloo City Hall as they wait and watch for the procession carrying the body of slain Illinois State Police Trooper Nick Hopkins. Dozens of police departments joined in the procession from St. Louis to Waterloo on Monday, Aug. 26, 2019. Photo by Tim Vizer 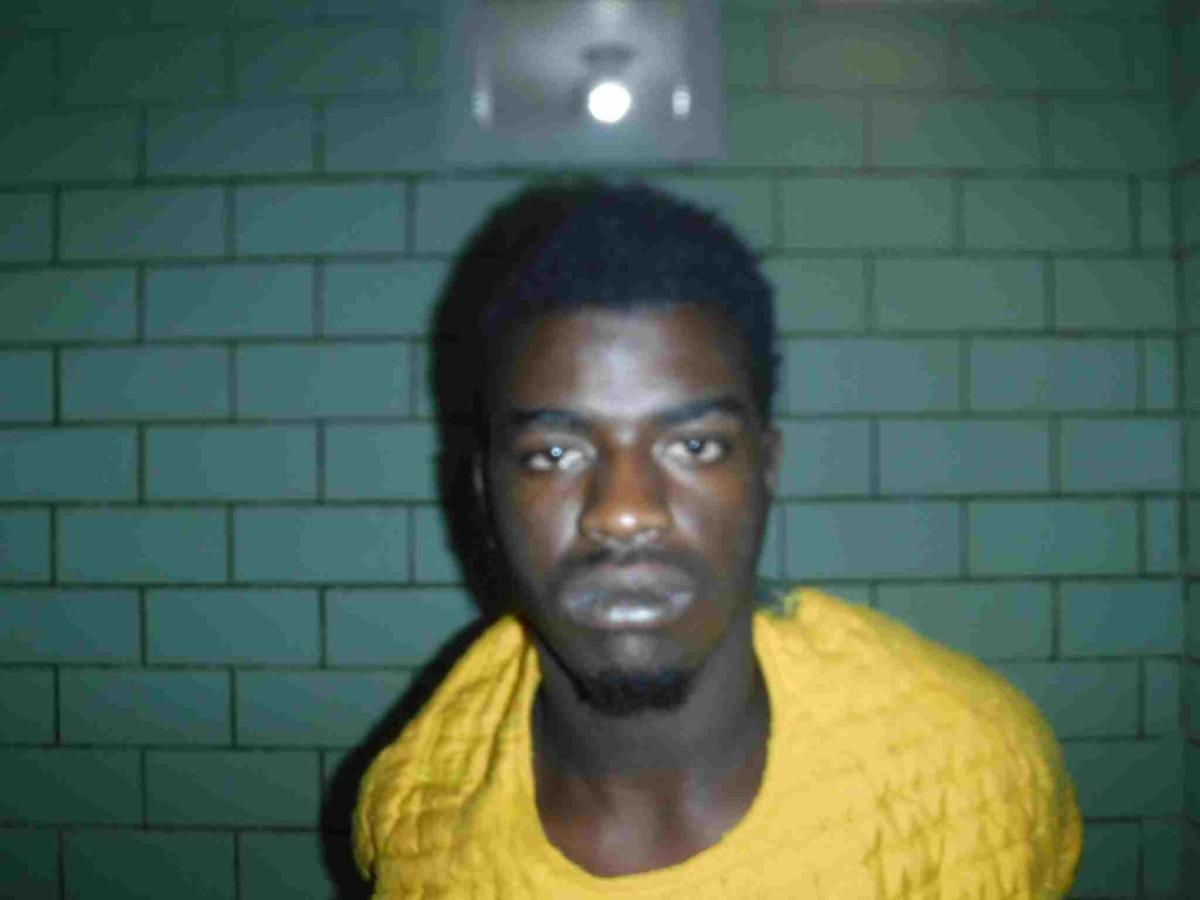 Al Stewart Jr., 19, was charged in connection to a raid that led to the death of Illinois State Trooper Nick Hopkins in 2019. He pleaded guilty in U.S. District Court in East St. Louis to a charge of being an unlawful user of controlled substance in possession of a firearm. 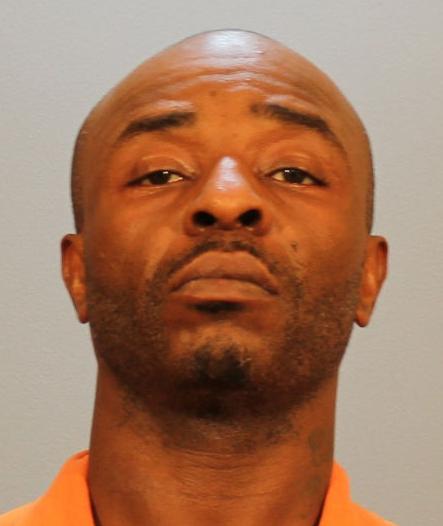 Christopher R. Grant was charged in August 2019 with first-degree murder in the fatal shooting of an Illinois state trooper. He also faces federal charges including use of a firearm to commit murder in furtherance of a drug trafficking crime.