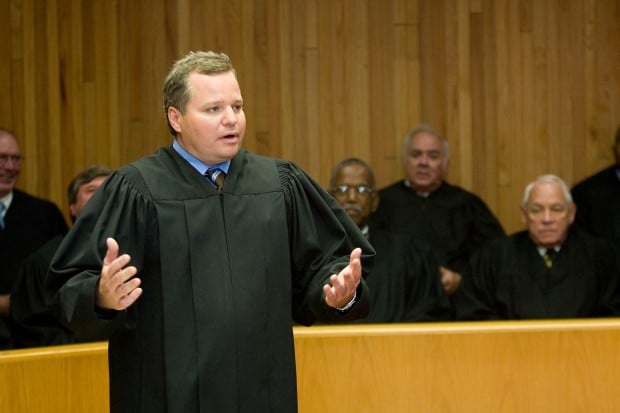 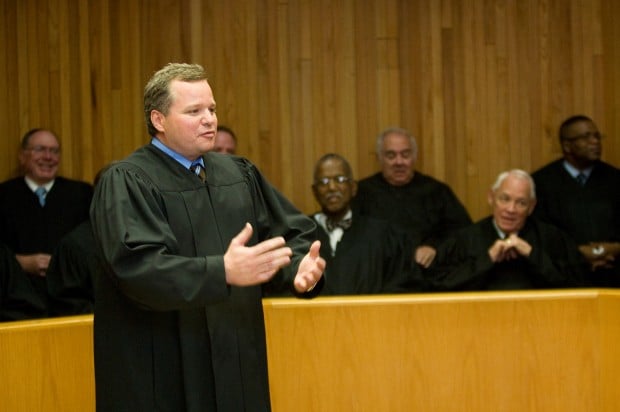 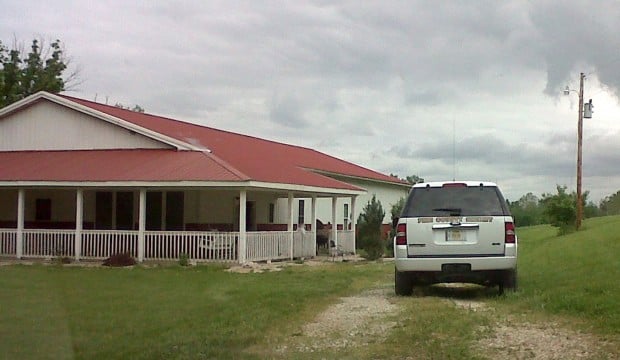 BELLEVILLE • A courthouse drug scandal expanded Friday with charges alleging that a St. Clair County probation worker used cocaine repeatedly with two judges and provided the dose that killed one of them.

James K. Fogarty, of the probation office’s investigative unit, told officials he bought cocaine and re-sold it to Associate Judge Joseph Christ and Circuit Judge Michael N. Cook the day before the two went to a hunting lodge where Christ died March 10.

Fogarty, 45, was charged in U.S. District Court in East St. Louis with distribution and possession with intent to distribute cocaine. He was held pending another hearing.

Earlier Friday, Cook, 43, appeared in the same courthouse to answer charges of being an unlawful user of a controlled substance in possession of a firearm, and a misdemeanor charge of possession of heroin.

The firearm reference may relate to guns Cook used for hunting.

Apparently wearing the clothes in which he was arrested Wednesday night, Cook attended the hearing in cut-off jeans and a blue T-shirt with the words “Bad is my middle name.”

Prosecutors wanted him held in a medical facility, although they did not say why. Defense attorney Bill Lucco asked for bail, with the condition that his client be placed in a treatment facility.

U.S. Magistrate Judge Clifford Proud released Cook on a $10,000 unsecured bail and required that he surrender his passport, remain in the continental U.S., stay away from guns and illegal drugs and submit to inpatient or outpatient substance abuse counseling, if probation officials require it.

Cook was reportedly on his way to a treatment facility Friday.

He is the son of Bruce Cook, a wealthy lawyer in Belleville who has been deeply involved in Democratic Party politics locally and nationally. The elder Cook could not be reached.

The charges capped a frenetic two-day period in which Cook was arrested Wednesday at the home in Belleville of Sean D. McGilvery, a friend now accused of running a busy heroin shuttle from Chicago.

The FBI, Drug Enforcement Administration and other agencies searched McGilvery’s house plus Cook’s chambers in the courthouse in Belleville, home in the same city, and family hunting lodge in Pike County, Ill., where Christ died.

McGilvery, 34, was charged late Thursday with conspiracy to distribute, and possession with intent to distribute, heroin. The charges claim he sold more than a kilogram.

He appeared at a brief hearing Friday, where he was told of the charge and the potential penalty: 10 years to life in prison. Prosecutors have asked that he be held pending trial. He is due back in court Thursday.

All of Cook’s cases were transferred to another judge Thursday, and St. Clair County State’s Attorney Brendan Kelly filed complaints against him with the Illinois Judicial Inquiry Board and the Attorney Registration & Disciplinary Commission.

According to an affidavit filed in court Friday by FBI Special Agent Joseph Murphy, Fogarty, the probation official, told investigators he repeatedly sold cocaine to both Cook and Christ and used it with them, including on golf trips and at least once at Cook’s lodge.

Fogarty said he, Cook and Christ “did a line” of cocaine from an eighth of an ounce that Fogarty bought for $275, and that Cook and Christ each gave him $140, court documents say.

Three to four days after Christ’s death, Fogarty spoke to Cook about it and Cook never mentioned using drugs at the cabin, Murphy wrote. Cook reportedly told Fogarty he heard a “bang” and went to a bathroom, where he found Christ dead.

The lodge is near Pleasant Hill, Ill., about 65 miles northwest of St. Louis.

Petty said Cook found the body in the bathroom and called 911 at approximately 6:18 p.m. Petty said that cocaine and drug paraphernalia were found at the scene, and that Cook was the only other person present when help arrived.

Chuck Prater, a volunteer firefighter who responded, told the Post-Dispatch Thursday that Cook had been upset and had said he’d just gotten out of bed and found his friend dead.

The two judges had gone to a hunters’ banquet the night before, in Pittsfield, Ill., Prater said he was told. “I guess they partied all night; I guess they didn’t go to bed until morning, the way he talked,” he said.

Christ was a former assistant prosecutor who had only been a judge for about 10 days when he died.

Cook is a former assistant public defender and private attorney who was elected associate judge in 2007. He was appointed to fill a vacancy as full circuit judge in 2010 and elected as a Democrat to a six-year term later that year.

McGilvery’s mother, Linda Gibson, told a reporter Thursday that Cook was a family friend who “came by the house sometimes, not often.”

She noted, “I thought it was because he was Sean’s friend. I never thought for a second that they were doing drugs. This is not a drug house.”

In 2011, Cook signed an order dismissing a drug case against McGilvery on the recommendation of prosecutors who operate a “drug school.” McGilvery had participated for 41 days.

McGilvery’s latest charging documents claim he conspired with Deborah A. Perkins, 65, and her son, Douglas William Oliver, 47, to deal heroin.

Court records show that Cook handled some motions delaying a criminal case in which Oliver and Perkins were accused of concealing the death of Jessica Williams, 30, originally of Collinsville, who officials believe overdosed on heroin at the pair’s home in Fairview Heights.

Another woman, Jennifer Herling, 20, apparently overdosed on drugs at the same house about six months later and died later at a hospital.

Oliver and Perkins were also charged in federal court in January with one count of possession of heroin with intent to distribute, conspiracy and maintaining a drug-involved premises.

Kelly, the St. Clair County state’s attorney, filed a motion this week specifically seeking removal of Cook from the Oliver and Perkins cases.

Bob Delaney resigned Wednesday, denying he did anything wrong.

Deborah A. Perkins, 65, admitted conspiring to sell heroin in a scheme involving her son and another man who was linked to an accused judge.

He was a prosecutor with the St. Clair County state's attorney's office before being appointed to the bench last month.

Scrutiny of Michael Cook spreads to overdose death of another judge, Joseph Christ. 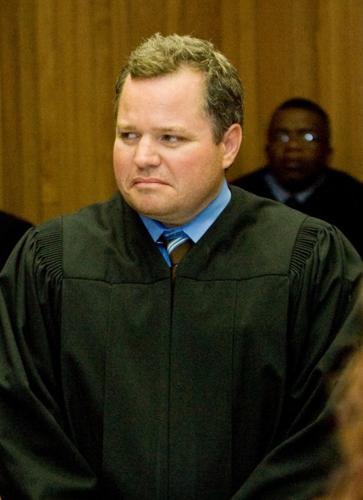 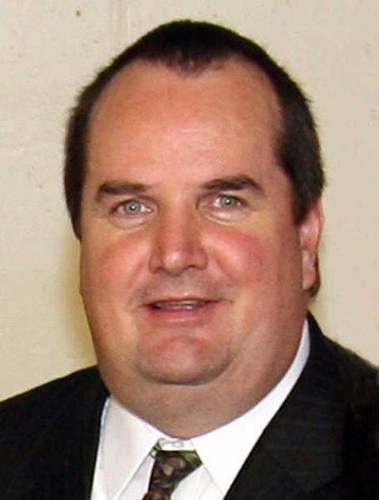