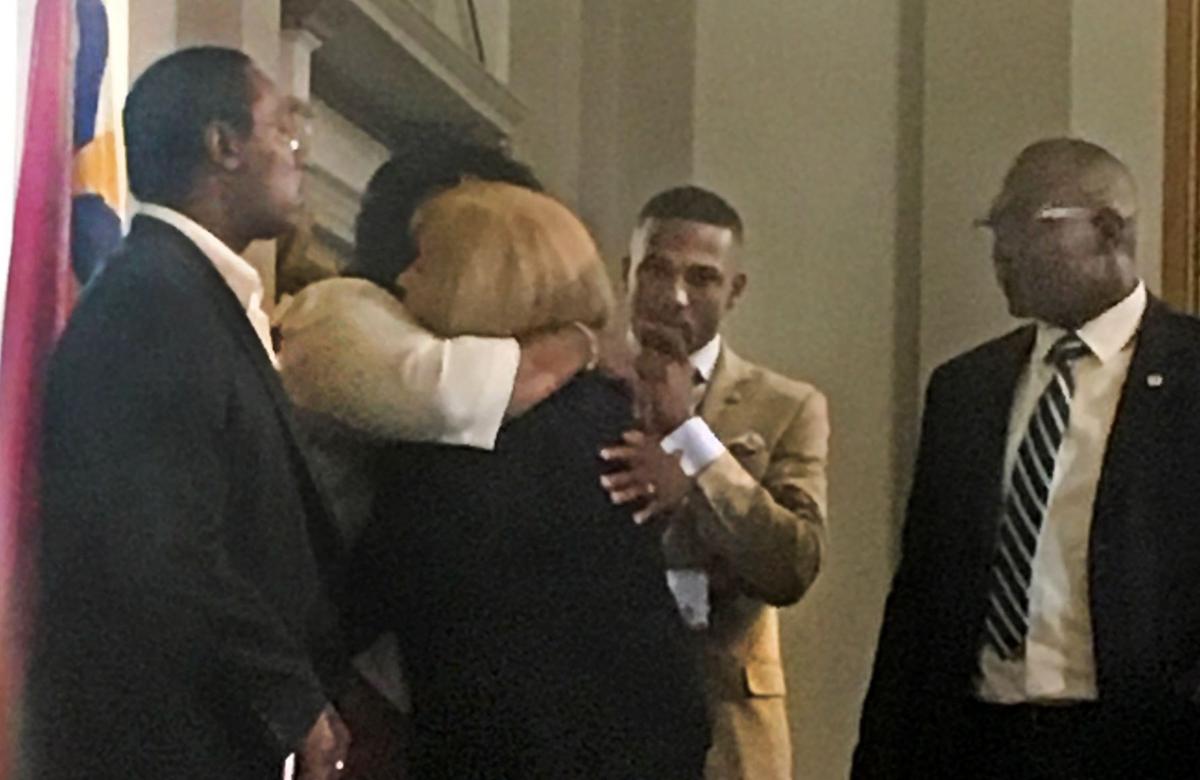 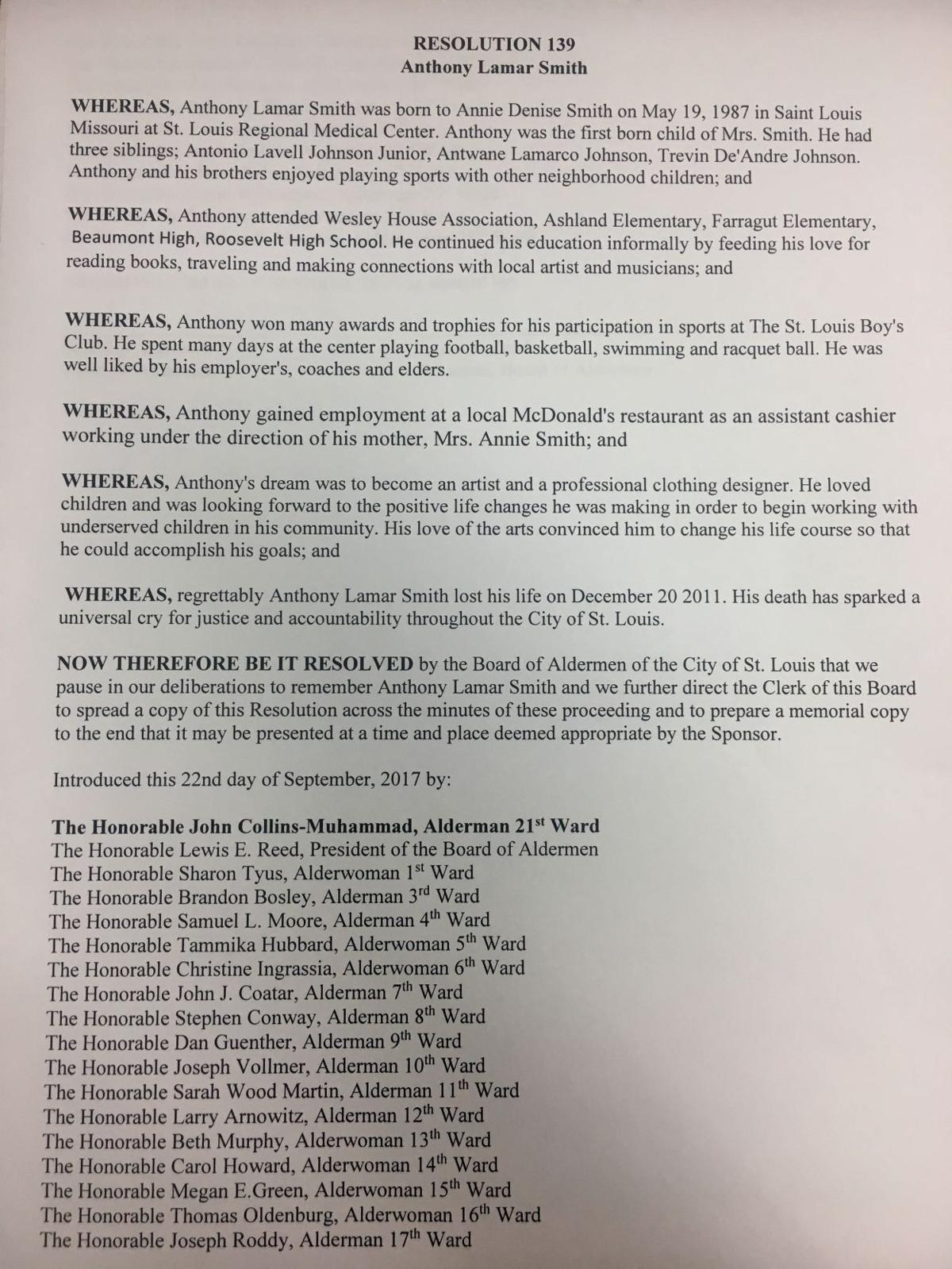 The St. Louis Board of Aldermen approved a resolution on Friday, Sept. 22, 2017, honoring Anthony Lamar Smith, who was killed by former police Officer Jason Stockley after fleeing police who were trying to stop him after observing a suspected drug deal.

ST. LOUIS • As the city continued to grapple with protests over the acquittal of former police officer Jason Stockley, the St. Louis Board of Aldermen on Friday unanimously approved a resolution remembering the man he fatally shot in 2011.

Both the resolution in remembrance of Anthony Lamar Smith and the mayor’s statement sparked outrage from St. Louis police officers, who contend city leaders are bowing to political pressure from the ongoing unrest.

“(Smith’s) death has sparked a universal cry for justice and accountability throughout the City of St. Louis,” reads the resolution, which bears the names of all 28 aldermen. It mentions Smith’s interests in sports and the arts, as well as his dream of becoming a professional clothing designer. 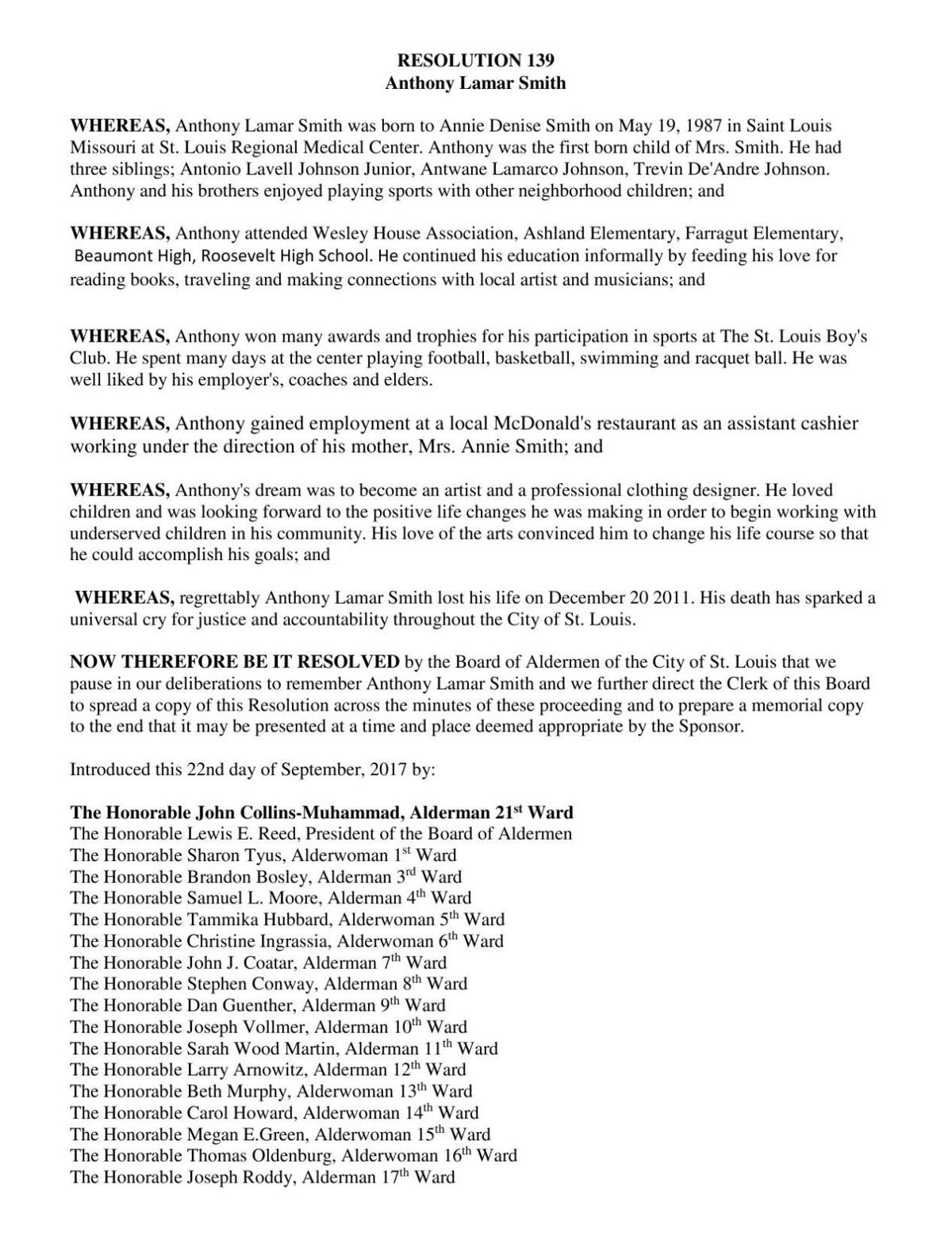 After the resolution was read and approved, Board of Alderman President Lewis Reed and Krewson hugged Smith’s mother, Annie Smith.

Alderman John Collins-Muhammad, who introduced the resolution, said the board acted in part to help ease Annie Smith’s grief.

“His mother had to wait six years for justice, which she still did not get,” Collins-Muhammad said. “So I invited her here today to let her know the city of St. Louis and the Board of Aldermen shares her pain, her frustration and her deep dissatisfaction with the turnout of everything that has happened.”

Jeff Roorda, business manager of the St. Louis Police Officers Association, said the board’s resolution unfairly portrays Anthony Lamar Smith as a hero and amounts to a slap in the face for city cops.

“To see them honoring a person who tried to take a cop’s life is appalling,” Roorda said. “I’ve never ever gotten this many calls and texts about anything the political class has done. My officers are furious about this.”

Roorda also criticized Krewson, who said Friday she supports reforming the way police officers’ use of force is investigated.

“You’ve got yourself a go-it-alone mayor who thinks she can fix law enforcement without talking to law enforcement and who thinks police are the problem in a case where a convicted felon who absconded from parole and was in possession of a firearm and heroin tried to kill a police officer,” Roorda said.

During his trial, Stockley, who is white, argued he shot Smith, who was black, in self-defense after a suspected drug deal and a high-speed pursuit and crash. The chase began when Stockley and his partner, Brian Bianchi, tried to arrest Smith for a suspected drug deal at a Church’s Chicken at Thekla Avenue and Riverview Boulevard and ended when the officers rammed Smith’s car at West Florissant and Acme avenues.

Prosecutors who charged Stockley with first-degree murder and armed criminal action said he carried out the premeditated murder of Smith by shooting him five times at close range and then planting a .38-caliber revolver in Smith’s Buick after police pulled Smith’s body from the car.

Stockley, who waived his right to a jury trial, was found not guilty last week by St. Louis Circuit Judge Timothy Wilson.

In a city still raw from a police shooting in Ferguson, activists and advocates have again flooded the streets to call for criminal justice reforms that never came to pass after the death of Michael Brown in 2014.

Among their demands has been a push for the Civilian Oversight Board to be given the ability to subpoena witnesses. Without it, they argue, the board’s power is limited.

While not specifically pledging to support that change, the statement Krewson released Friday says she wants that board strengthened and supports reforming the way police officers’ use of force is investigated.

“The core of what I’ve heard over the last week is a call for increased accountability,” Krewson said in the statement.

The question of subpoena power — the authority to compel testimony — was at the heart of the debate over the creation of the board. Supporters of the idea say the move would give the board more power in investigating complaints against police.

But opinions differ as to whether the city’s charter allows it to bestow such power to the board. Then city-Counselor Winston Calvert said in 2015 that doing so would require a public vote to change the charter or a change in state law.

Asked if Krewson supports giving that board subpoena power, her spokesman Koran Addo said via email: “The mayor supports strengthening the Civilian Oversight Board. Subpoena power is likely part of that. However, it is our understanding that authority rests with the state.”

Cities and counties can create civilian review boards under Missouri state law, which gives them the power to “receive, investigate, make findings and recommend disciplinary action upon complaints by members of the public against members of the police department.” Under that law, those recommendations are submitted to the chief of police.

In her statement, Krewson also called on leaders to use the Ferguson Commission Report, issued after Brown’s death, to guide decisions on issues involving police complaints, use of force guidelines and related issues. 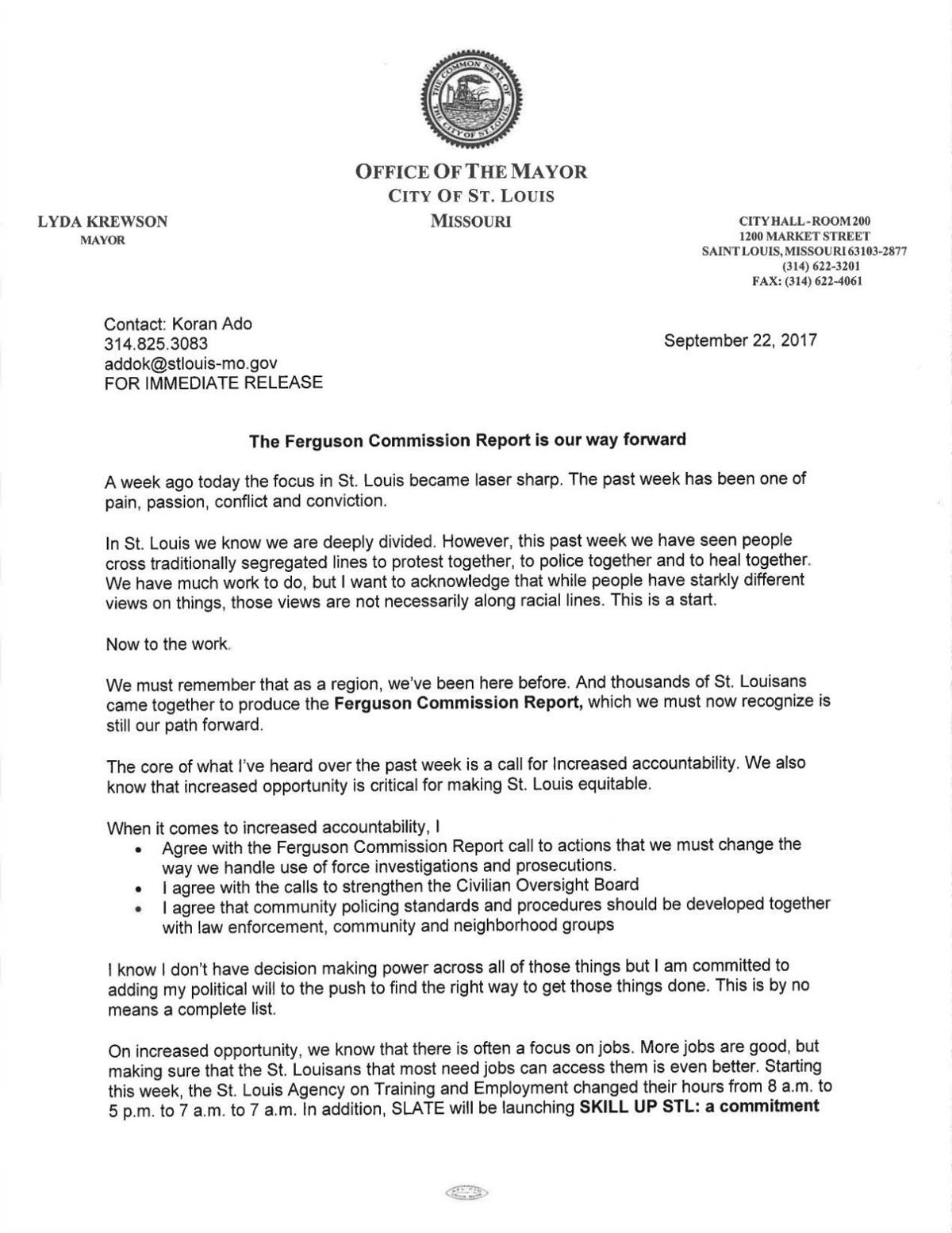 “We must remember that as a region, we’ve been here before,” she said.

Aldermen who supported the resolution remembering Smith said they hoped this case would mark a turning point.

“When you look back at history in this time, and you see the change that’s happened ... you’re going to see amongst those records, your son’s name,” Reed told Smith’s mother.

Resolution passed by St. Louis Board of Aldermen

WHEREAS, Anthony won many awards and trophies for his participation in sports at The St. Louis Boy's Club. He spent many days at the center playing football, basketball, swimming and racquet ball. He was well liked by his employer's, coaches and elders.

WHEREAS, Anthony gained employment at a local McDonald's restaurant as an assistant cashier working under the direction of his mother, Mrs. Annie Smith; and

WHEREAS, Anthony's dream was to become an artist and a professional clothing designer. He loved children and was looking forward to the positive life changes he was making in order to begin working with underserved children in his community. His love of the arts convinced him to change his life course so that he could accomplish his goals; and

WHEREAS, regrettably Anthony Lamar Smith lost his life on December 20 2011. His death has sparked a universal cry for justice and accountability throughout the City of St. Louis.

NOW THEREFORE BE IT RESOLVED by the Board of Aldermen of the City of St. Louis that we pause in our deliberations to remember Anthony Lamar Smith and we further direct the Clerk of this Board to spread a copy of this Resolution across the minutes of these proceeding and to prepare a memorial copy to the end that it may be presented at a time and place deemed appropriate by the Sponsor.

A timeline of events and coverage

The Jason Stockley case: a timeline of events

The St. Louis Board of Aldermen approved a resolution on Friday, Sept. 22, 2017, honoring Anthony Lamar Smith, who was killed by former police Officer Jason Stockley after fleeing police who were trying to stop him after observing a suspected drug deal.