St. Louis area police warn of no tolerance for stunts during big motorcycle gathering
0 comments
Share this
{{featured_button_text}}
1 of 2 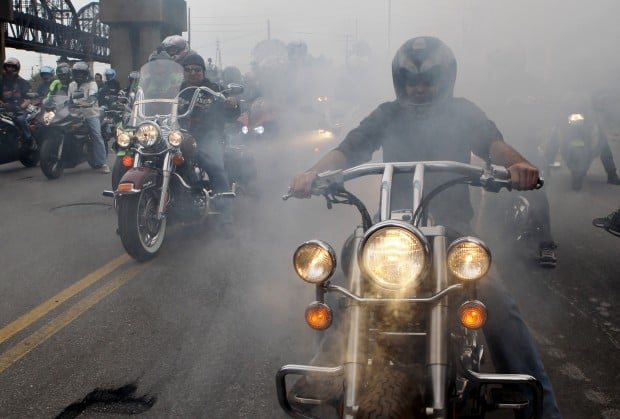 Thousands of motorcycle riders take off on the 10th annual Ride of the Century on Sept. 15, 2012, for a ride through the St. Louis area. Photo by J.B. Forbes, jforbes@post-dispatch.com 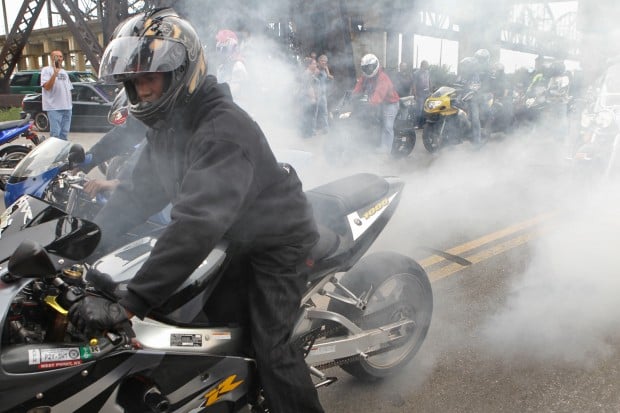 A motorcycle rider smokes his tire during the 10th annual Ride of the Century gathering in St. Louis on Sept. 15, 2012. Photo by J.B. Forbes, jforbes@post-dispatch.com

WELDON SPRING • Police leaders from across the region vowed on Wednesday to crack down on any motorcycle mischief this weekend when thousands of riders are expected to converge on St. Louis.

With video footage of motorcyclists balancing on one tire and boxing out squad cars providing a backdrop, Missouri Highway Patrol Capt. Ronald Johnson said too many riders had set out with the intent to cause chaos during past “Streetfighterz Ride of the Century” events.

“We will have a zero tolerance for any illegal behavior and stunts on our roadways,” Johnson said in a news conference at the Troop C Headquarters here.

Police expect more than 3,000 riders on street bikes over the Labor Day weekend. Officials said they would increase patrols, set up safety checkpoints and send letters to insurance companies with whom ticketed motorcyclists have policies.

“We will notify the insurance company of those violators that are committing hazardous moving violations,” said St. Louis County Police Chief Tim Fitch. “Many of these riders will tell us, ‘So what if we get caught?’ We want to make sure that the insurance companies know that their insured ... is engaged in this kind of behavior.”

Some ticketed riders, Fitch said, have boasted that they would contact attorneys to try to get their tickets knocked down to nonmoving violations.

Police leaders agreed that, in the past, those who have engaged in unsafe behavior represented a small number of overall participants. But illegal behavior has included wrong-way driving, highway blockages and stunts that endangered ordinary motorists as well as bikers.

Joining Johnson and Fitch at the news conference were leaders of the St. Louis and St. Charles County departments. Police say they have reached out to their counterparts in neighboring states as well.

St. Louis Police Chief Sam Dotson stressed individual responsibility among participants. Having 3,000 motorcycles on the road is all right, he said, so long as riders don’t break the law.

In the past, he said, some riders appeared to have even taunted police officers while performing stunts or driving erratically.

During the 2012 event, police said there was a large number of arrests, and officers recovered some stolen motorcycles and street bikes that were not registered.

But ride participants who watched Wednesday’s news conference said that most who rode in the annual celebration were law-abiding, and that police were unfairly singling them out.

“It’s a celebration of our lifestyle,” said Shane Harper, 33, of O’Fallon, Mo. “It’s something that we like to do.”

Harper said much of the stepped-up enforcement for the annual event was a waste of taxpayers’ money. The large ride, he said, is actually a boon to the local economy.

“It’s not illegal to ride in a group of bikes,” he said. “It’s not. It’s an absolute stereotype.”

But Johnson said those who were law-abiding would not have anything to worry about.

“If your bike is on one wheel, or you’re going the wrong way on the interstate,” he said, “you’re not a law-abiding citizen.”

Police say they observed about 40 motorcyclists performing stunts and driving recklessly before the arrests.

Police say one bike in a group that passed unmarked police car clipped the side-view mirror and crashed. It was the second motorcycle fatality of the day.

Backers of proposed ban say it's unfair to single out motorcyclists in traffic stops, while critics maintain they help protect public safety

Thousands of motorcycle riders take off on the 10th annual Ride of the Century on Sept. 15, 2012, for a ride through the St. Louis area. Photo by J.B. Forbes, jforbes@post-dispatch.com

A motorcycle rider smokes his tire during the 10th annual Ride of the Century gathering in St. Louis on Sept. 15, 2012. Photo by J.B. Forbes, jforbes@post-dispatch.com