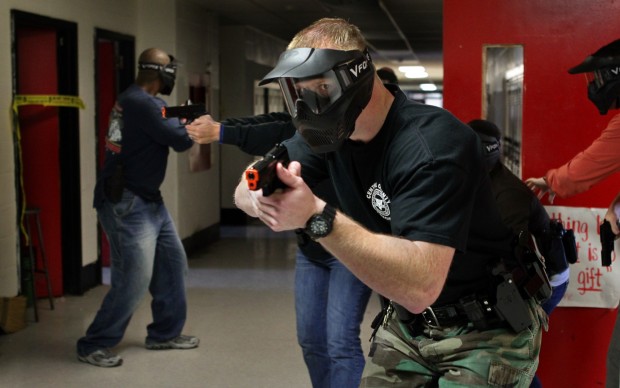 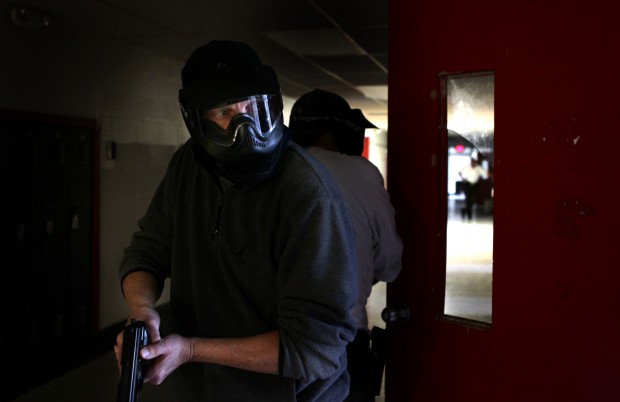 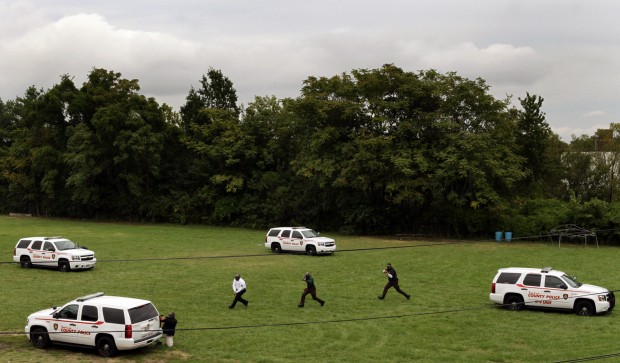 St. Louis County police officers provide cover for each other in teams as they practice entering a building during "active shooter" training on Sept. 22, 2011, at the old Wellston High School. Robert Cohen rcohen@post-dispatch.com 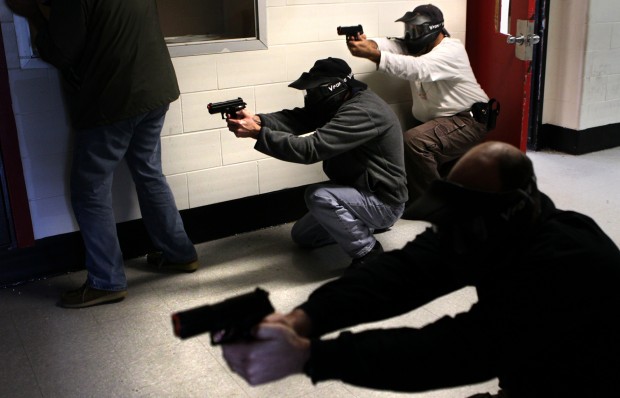 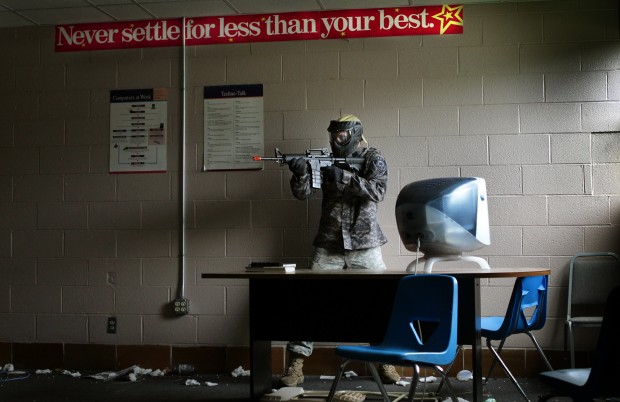 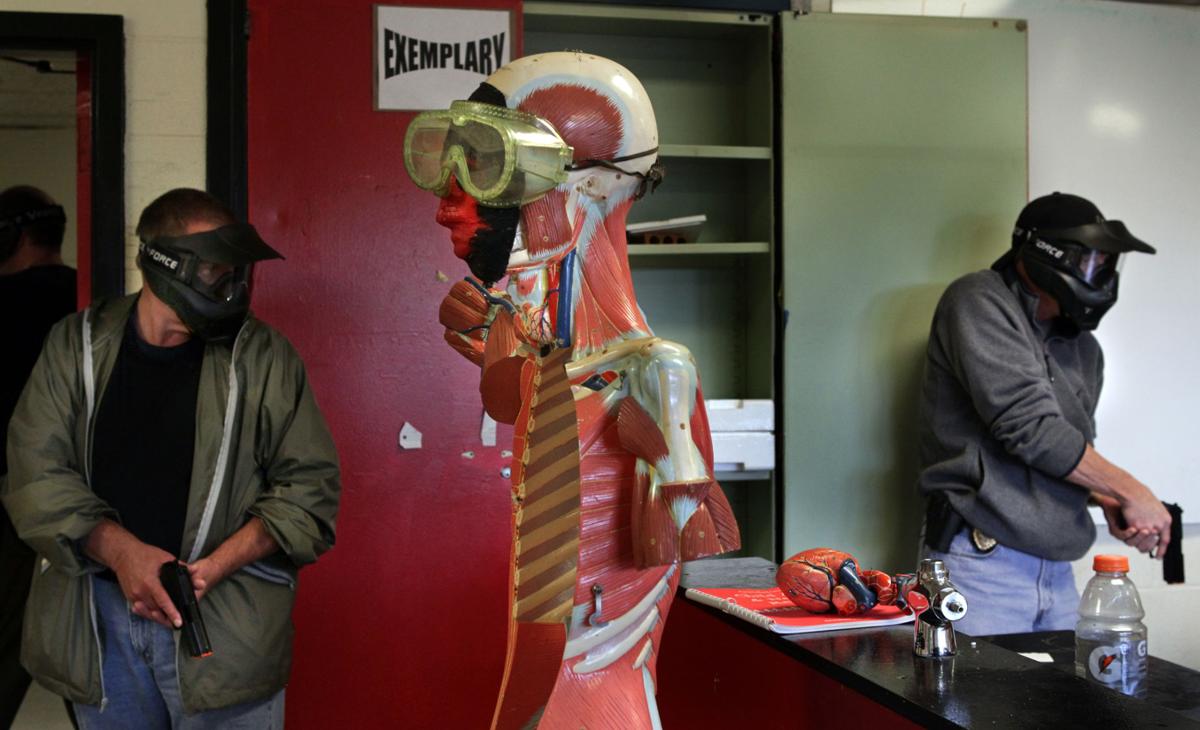 Updated 1:45 p.m. to include comments from St. Louis police

WELLSTON • After 26 years as a police officer, St. Louis County Lt. Karl Bulla thought he knew how to handle an armed suspect.

He moved stealthily down the hallway as the three officers following behind in a diamond-like formation cleared rooms on either side of him. Then, the shots started. Bulla's instincts told him to charge toward the sound.

He looked back and realized he was alone.

His team had darted into a room to clear it. At that moment, the training he had just learned kicked in and changed his reaction.

Instead of going it alone, he realized the team had to take the shooter together. His chances of survival depended on it.

The scenario has played out several times this summer inside the former Wellston High School building as the county becomes among the first in the nation to require the training department-wide to handle multiple terrorist attacks.

Every officer — from the chief on down the ranks — will receive the training, known as Multiple Attack Counter Terror Action Capabilities, or MACTAC. Along with tactics, the training shows how best to respond without sending too many officers. The St. Louis Police Department began offering the training in 2009 to lieutenants on down in phases.

Fitch said he saw the need for training in the county at the Kirkwood City Hall shooting in which Charles "Cookie" Thornton killed five people in 2008.

"I got there within 20 minutes, and I looked around and saw police cars there from Illinois," Fitch said. "If that would have been part of a planned series of attacks, we would have had all our resources in one place."

The training tactics mirror those usually reserved for the department's SWAT team members. But taking it to all 850 officers, from a rookie like Dustin Schmidt, 27, to a veteran like Bulla, ensures that those first on the scene can react immediately if the luxury of waiting for SWAT members could cost lives, Fitch said.

"Our street guys' average response time is three minutes," Fitch said. "They need to be able to react right now instead of waiting for an hour for SWAT to show up."

Fitch said a shooter's intent isn't to survive an attack.

"Their biggest fear is that they won't succeed," Fitch said. "We need to disrupt them and stop them right away."

The department's SWAT team members, many with military experience, conduct the training.

Officer Lisa Reynolds served as a member of the Army's Military Police force and completed two tours in Iraq. She watched as Bulla's team split from their formation.

"Don't hesitate when you're coming in, you've got to own the room, it's yours," she told them. "You've got to watch out for that fatal funnel at the door."

Fitch said several municipal police departments want the training as well. The hope is that officers, regardless of their department, will automatically follow the same tactics, such as forming a diamond together while clearing rooms and searching for suspects.

Deeba said he and the SWAT team leaders from St. Charles and St. Louis counties have worked together to bring MACTAC to their respective departments.

Officers use air rifles and handguns loaded with plastic pellets during the training. They remain under the watchful eye of SWAT team members as they clear rooms and search for suspects.

"Hurry up! Hurry up! People are dying," Reynolds shouted as Bulla's team dipped into another room even though shots could be heard coming from another. "What do you do?"

"Call for SWAT!" one member shouted.

"They're an hour away," Reynolds said.

The county's SWAT team's record for responding is about 35 minutes, because that's how long it takes to assemble at one location, get suited up and get to a scene, said Capt. John Belmar.

Each year, Belmar sends two members of the SWAT team for training in Pittsburgh. This year, they learned about MACTAC, which made teaching the course department-wide cost effective, he said.

In all, he estimates spending $5,000 on equipment.

"It doesn't matter if they're behind a desk or working a busy beat, and the chief wants it done every year," Belmar said.

Only a handful of large metropolitan police departments across the country have required the training for every officer, Belmar said.

The last time county officers underwent active shooter training was in 2000, shortly after the Columbine High School shooting in which two teenagers killed 12 students and one teacher. And not every officer was required to attend, he said.

During terrorist attacks since then, weapons have become more advanced and planned, Belmar said.

"What we've seen is an active shooter growing from disgruntled high school kids to dedicated terrorists," Belmar said. "Were that to be imported to this country, we need different tactics."

Belmar said he's had even the hardest to motivate veterans compliment the program.

"Your everyday house and business searches, we can use cover and learn to move with each other," Fumagalli said.

In each scenario, though, officers responded differently when they came face-to-face with the shooter. Some shot him. Others ordered him to drop his weapon and moved in to make the arrest. Some got shot.

"Most officers will never even pull their guns in a career, but this prepares us to be ready," he said.

St. Louis County police allow some officers to carry their own rifles

Police documents detail a plan nearly as frightening as the one that took place at Columbine High School in 1999.

Organizers say they may cancel event; if not, Highway Patrol plans some action.

Total reports of crime dropped in seven of the eight Missouri counties in the metropolitan area, with Lincoln County as an exception.

St. Louis County police officers provide cover for each other in teams as they practice entering a building during "active shooter" training on Sept. 22, 2011, at the old Wellston High School. Robert Cohen rcohen@post-dispatch.com