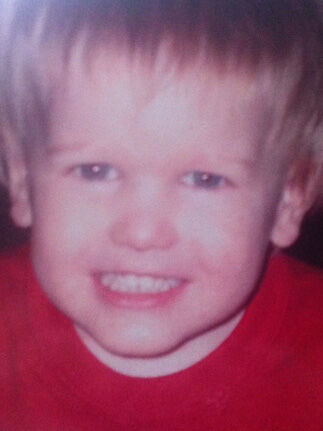 Mason Gorse in a family photo. 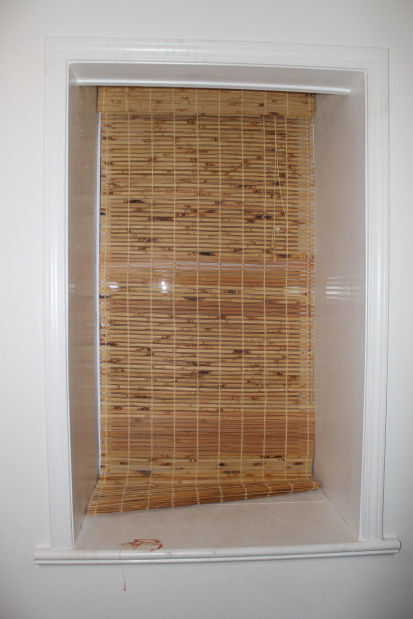 This police photo, taken in April, shows the window sill and window blinds in Mason Gorse's bedroom in the family's St. Louis home on Water Street. 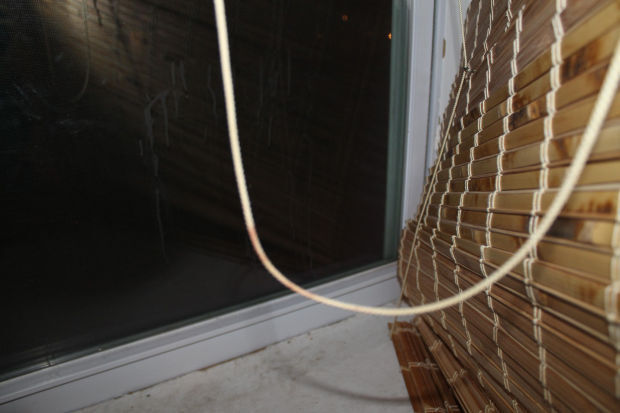 A police photo shows the window blind cord that Mason Gorse was tangled in on April 1 at the family's home on Water Street in St. Louis. 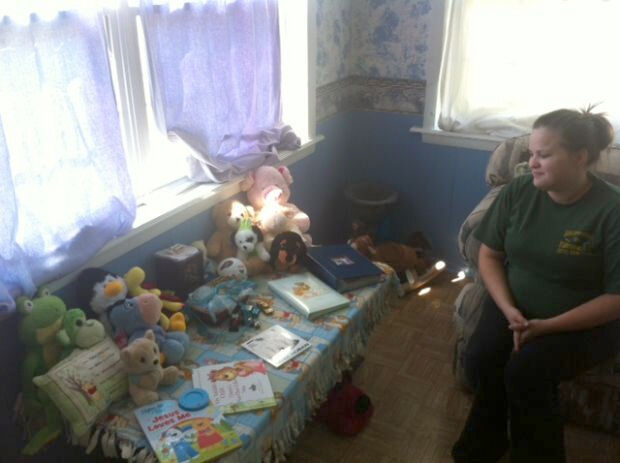 Jessica Coleman sits in front of a table at the family's new home in De Soto. On the table sits some of her son Mason Gorse's favorite toys — and a wooden box that contains his ashes. Photo by Kim Bell of the Post-Dispatch. 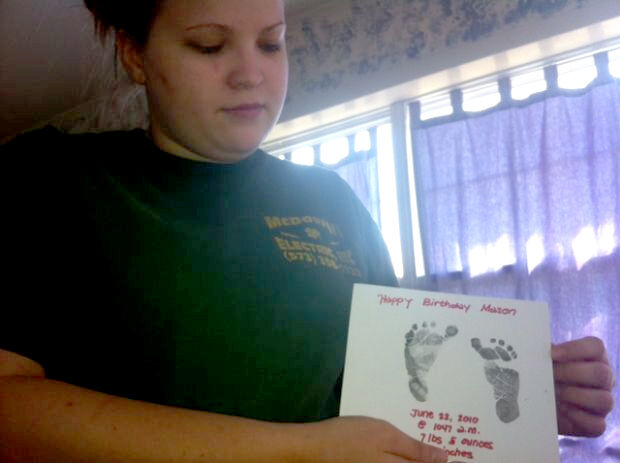 Jessica Coleman holds a copy of her son Mason Gorse's baby footprints. Photo by Kim Bell of the Post-Dispatch.

ST. LOUIS • Mason Gorse was a curious boy, nearly 3 years old, who liked to climb into the deep window sill in his bedroom and look outside at the dogs in the yard.

His mother had caught him doing it before. She scolded him. She lined up his stuffed animals in the sill, hoping to block him from climbing up. But what happened in mere minutes on the night of April 1 in Mason’s bedroom has his mother second-guessing herself still.

Jessica Coleman, 25, had put Mason down for a nap at the family’s home on Water Street. She went to check on him after about five minutes and didn’t see him in his toddler bed.

She saw what looked like a shadow near the window and turned on the light. She saw only the bottom half of his body; the rest was behind the wooden roll-up window blind. She thought he was standing up, but his feet weren’t touching the ground.

She got closer and touched him. She saw blood on his face and ran screaming for her boyfriend. Mason was hanging from the window blind cord, apparently getting tangled in it after climbing onto the sill and falling.

St. Louis police who investigated the boy’s death call it an accident. Though numbers each year vary, about one child a month has died this way nationwide on average since 1996.

“I always had window blinds in every house I lived in, and the danger is not something I thought about once,” Coleman said in her first interview about Mason’s death. “I don’t think people do until something like this happens.”

Linda Kaiser, a Barnhart woman who founded Parents for Window Blind Safety, said Coleman’s tragic loss is typical of the cases she has seen nationwide.

Kaiser founded the safety group after her 1-year-old daughter Cheyenne died in her crib in 2002. Cheyenne was found with an inner cord from a window blind wrapped around her neck. Kaiser had the pull cords tied up out of the baby’s reach, but Kaiser wasn’t aware of the inner cords.

“In all of these accidents, the parents are questioning their parenting abilities,” Kaiser said. “Some maybe felt they should have been watching their child more. Others maybe tied up pull cords out of the child’s reach and a loop still formed and pulled out from in between slats. They followed all of the safety precautions and it still happens.”

Kaiser adds: “It’s not about the way you parent. It’s about the product in your home.”

Despite a public-safety campaign that the Consumer Product Safety Commission told the industry to start two decades ago, Kaiser still sees a lack of awareness. October is the month the groups urge parents to check their window coverings for exposed or dangling cords.

“I think most parents don’t know about it, or they think the product in their house is safe because they bought it yesterday or bought it a few years ago,” Kaiser said. Kaiser recommends parents get the cords out of their homes. She suggests drapes, cordless blinds or a cord-covering device that costs about $15 a window.

Kaiser said some products being sold in the big-box stores now say “cordless” on the box even though the blind has a cord on the inside that raises and lowers the blind. “When a parent sees that, they think it’s safe,” Kaiser said. “That’s why we say, ‘If you can touch the cord and pull on it, that is not a safe product.’”

The industry group, the Window Covering Manufacturers Association, says recalls and other efforts have helped reduce the number of injuries and deaths. Warning labels are now on packaging, and the industry recommends that people with older blinds get a repair kit to retrofit older and recalled products. But industry leaders add that every hazard cannot be eliminated on these products, which aren’t designed for children.

The industry on its website reminds parents of the potential dangers and urges them to use only cordless products. But critics say the warning on the box won’t do much good if a person who rents or buys a home never sees the box, and the warning is nowhere on the product itself. And Kaiser said the retrofit kits aren’t foolproof.

Kaiser said the industry has taken steps to make products safer but needs to do more. “Unless the industry is forced to take the operational cords off products,” she said, “I don’t think we’ll see a reduction in deaths.”

Coleman said she never thought once about the hazards of window blind cords. She rented the home on Water Street, and the blinds were there when she moved in. The nylon cord was on the inside of the wooden roll-up window blind in Mason’s room, facing the window, and Coleman never saw the cord.

It’s been six months since Mason’s death. Her husband, Ron Coleman, was slain the year before Mason died, and her father is charged with the killing. Coleman says both losses have made her a more frantic mother now — checking on her 4-year-old son and newborn daughter several times a night. She always thought she was a protective parent before, but now she is in overdrive.

“Be aware of what’s going on in your child’s room,” Coleman urges parents. “Sometimes it’s the smallest thing that could save your child’s life, like cutting the cord or taking the window blinds down or installing curtains instead of having blinds.”

She and her two children and her boyfriend, Josh, who works construction jobs, moved out of the home on Water Street shortly after Mason’s death. They stayed with relatives for a short time, then found a rental home in De Soto. One of her first tasks was to install drapes on every window.

“I will never have window blinds again,” she said.

Police found the woman dead at the retirement home on Thursday afternoon.

Boy, 2, strangled by cord of window blinds in St. Louis

The boy died at a hospital.

Jessica Coleman talks about the death of her 2-year-old son, Mason Gorse, on April 1 in St. Louis. Mason strangled on a cord from a window bl…

Are your window coverings safe?

Mason Gorse in a family photo.

This police photo, taken in April, shows the window sill and window blinds in Mason Gorse's bedroom in the family's St. Louis home on Water Street.

A police photo shows the window blind cord that Mason Gorse was tangled in on April 1 at the family's home on Water Street in St. Louis.

Jessica Coleman sits in front of a table at the family's new home in De Soto. On the table sits some of her son Mason Gorse's favorite toys — and a wooden box that contains his ashes. Photo by Kim Bell of the Post-Dispatch.

Jessica Coleman holds a copy of her son Mason Gorse's baby footprints. Photo by Kim Bell of the Post-Dispatch.