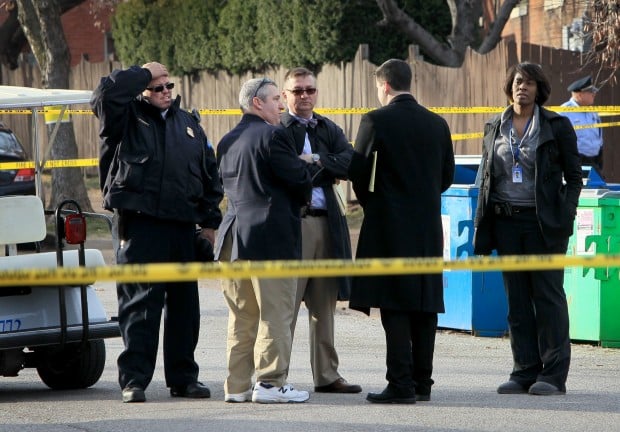 Police officers gather at the scene of a shooting at the intersection of Ninth and Barton streets in Soulard on Saturday, Feb. 9, 2013. The shooting came during Soulard Mardi Gras festivities. Photo By David Carson, dcarson@post-dispatch.com 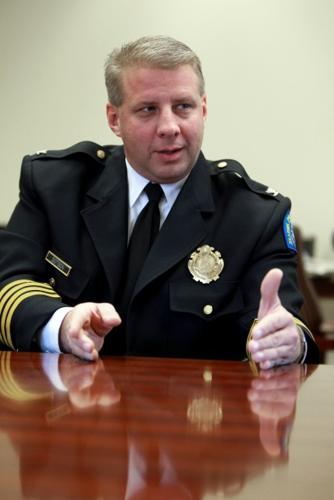 ST. LOUIS • With an aging arsenal of pistols, the St. Louis police leadership is being prodded by at least some officers to consider buying greater firepower.

The department has set aside $1.4 million this year to buy new sidearms for the department’s 1,300 or so officers. Beretta has stopped making the 9 mm semi-automatic they’ve been carrying for more than a decade.

The department only has enough new weapons to issue to the current academy class, which will graduate in January. When that supply runs out, recruits would have to get used guns.

For years, the Police Officers’ Association has lobbied for the larger .40-caliber pistols, which they say pack more stopping power plus have less tendency to pass through targets and on to unintended consequences. Other departments, including St. Louis County, use the bigger weapon.

“This isn’t about us wanting bigger guns, this is wanting to have a personal defense weapon that is equal to or as close as we can get to what’s on the street against us,” said the association president, Sgt. David Bonenberger.

The union’s voice in the matter has gotten louder, given a collective bargaining agreement it says requires police leaders and the rank-and-file to reach an agreement before the department can change weapons. If they cannot agree, the department will have to purchase more of the obsolete weapons, Bonenberger said.

But talks don’t seem to be going well.

Chief Sam Dotson said allowing officers to carry their own rifles is a “terrible idea,” and that the union should propose ways to reduce the need for officer-involved shootings rather than simply ask for bigger guns.

“This conversation would be a lot different if they were talking about ways to reduce the need for deadly force conflicts,” Dotson said.

And it appears that there is division within the police union as well.

Jeff Roorda, the business manager, insisted that Bonenberger does not represent the association in this matter, and said its board does not want to discuss it publicly.

'THERE'S BETTER OUT THERE'

The city has used 9 mm Berettas for about 20 years, with each weapon in use for about 15 years.

Caliber is a decimal of an inch; a .40-caliber bullet is four-tenths of an inch in diameter, about one-ninth larger than a 9 mm, which is measured in metric.

While the hole sizes are close, the energy delivered by the larger bullet is significantly greater. Specifications from one ammunition maker, Winchester, show a 27.5 percent difference (408 foot-pounds, a standard measurement of force, compared with 320).

In April 2012, the police academy and the police union tested five different types of bullets, which included firing them into ballistic gelatin. A slug must penetrate the gelatin at least 12 inches, but not past 18 inches, for it to be considered effective, according to FBI standards.

The 9 mm round failed the test, with the .40-caliber and .357-caliber rounds performing the best. The union agreed to endorse the .40-caliber, saying the .357 would be too expensive, Bonenberger said.

“We’ve got an opportunity to get better ammunition and equipment for us to protect our citizens, why wouldn’t we do that?” Bonenberger asked.

But it isn’t that simple, Dotson said.

The chief doesn’t know of any time when the department’s 9 mm has failed to stop a threat when officers hit their target. And the department has an adequate supply of 9 mm rounds, not .40-caliber bullets. Both sizes are scarce because of a nationwide ammunition shortage.

“I would never put officer safety behind economics, but we’ve got a weapon that’s performed,” Dotson insisted.

He said he also is concerned about errant rounds of .40-caliber weapons in an urban environment, and he believes the union is ignoring the risk.

“We miss more than we hit sometimes,” the chief said.

Bonenberger said the union agrees with the need for more training, and successfully argued to increase the number of times officers must qualify with their weapons to four times a year from only once.

“Why remain with what works when there’s better out there?” Bonenberger asked.

Earlier this month, about 95 officers responded to a union survey about rifles. Of them, more than 85 percent said they would participate in a personally owned rifle program and buy their own weapon — which can cost about $1,200 — if needed.

In St. Louis County, 67 officers have started carrying their own rifles since such a program began there three years ago. County Police Chief Tim Fitch it saves the department money while keeping officers and the community safer.

More than 85 percent of respondents to the city union’s survey estimated that a sergeant’s response time to a scene is five to 10 minutes, or more — a question born from a pilot program to put rifles in supervisors’ cars that has so far failed to launch.

The St. Louis Police Foundation spent about $81,000 on 45 Titan B/SL rifles for all district supervisors’ vehicles in April 2012. But they are still in boxes.

Department leaders did not account for everything needed to put the weapons to use, including ammunition and training rifles, said Dotson, who became chief in January. He estimates that the department needs about $173,000 to get those weapons on the streets.

The foundation’s director, Michelle Bagwell, did not respond to a phone call for comment.

Dotson said he has liability concerns about personally owned weapons and believes the department should provide officers’ equipment.

“It just wouldn’t work for a department our size,” the chief said.

At least one city officer has already carried his own rifle on duty. In 2011, Officer Jason Stockley was seen holding, but not using, an unauthorized AK-47-style rifle while trying to arrest a suspect who was later killed by police with a different weapon. Stockley remains on administrative duty. The deceased suspect’s family has sued the department over the incident.

But the decision nagging Dotson most in the move toward new weapons is what to do with the old ones.

He’s not sure how the sermon he often preaches during public appearances — that “more guns are never the answer” — will comport with the option of selling retired guns and risking seeing them go back on the streets.

“Do I melt them, or possibly monetize them?” Dotson asked, adding that he estimates the department’s 2,000 pistols to have a resale value of about $200 each.

The union sent Dotson an overview of how other departments have handled the situation, which includes selling the guns to officers or shipping them overseas to be sold to police in other countries.

In St. Louis County, about one-fourth of the officers have bought back their old weapons for sentimental reasons, and about 200 of the county’s guns went to law enforcement agencies in Puerto Rico, said John Bozarth, the county’s armorer.

The union and Dotson’s office have yet to schedule another meeting to discuss the issue.

And Dotson said he remains undecided.

Charges filed against man who was shot by St. Louis police officer after foot chase

The officer saw the man raising hand from his waistline and feared for his life, police said.

Officer was shot at after observing a man shooting from a front porch, police say.

The automatic weapons were appraised at about $770,000 but could be worth more.

Minority recruitment, advancements are a challenge for St. Louis police

Recent round of white promotions drew criticism from an association of black officers.

Merger is just the latest in a series of cost-saving moves the region’s two largest police departments have made.

More than 200 guns were seized, many from convicted felons.

Police officers gather at the scene of a shooting at the intersection of Ninth and Barton streets in Soulard on Saturday, Feb. 9, 2013. The shooting came during Soulard Mardi Gras festivities. Photo By David Carson, dcarson@post-dispatch.com