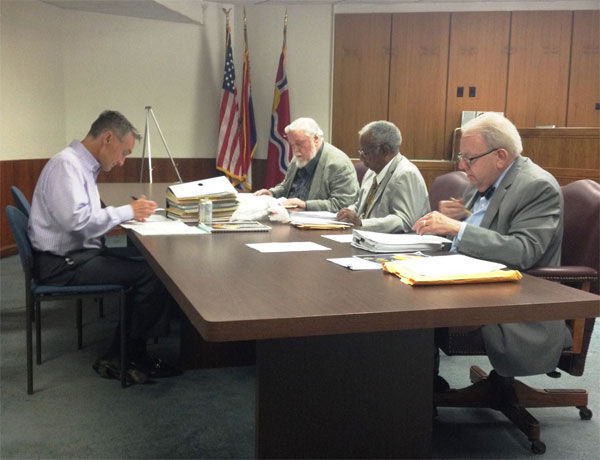 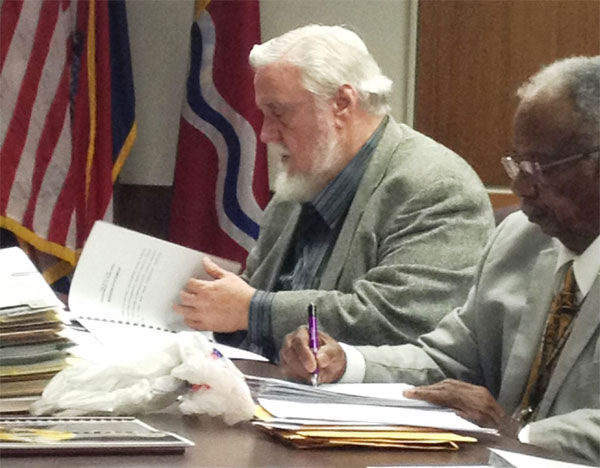 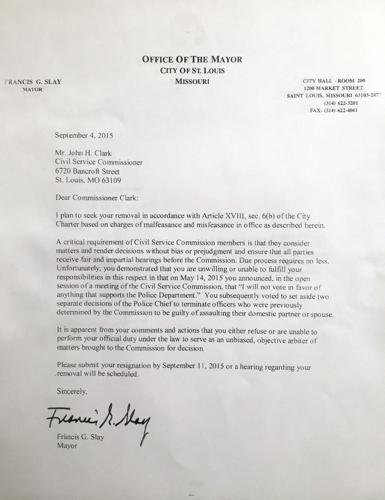 In a letter dated Sept. 15, 2015, Mayor Francis Slay notifies John Clark of an upcoming hearing to remove him from the Civil Service Commission.

ST. LOUIS • After several attempts at asking nicely, Mayor Francis Slay is about to force John Clark to resign from the Civil Service Commission — a move Clark believes is based on his outspoken criticism of police disciplinary matters.

Slay sent a letter to Clark 10 days ago notifying him that he will be forced to resign from the commission following a remark he made during a meeting in May. Slay accuses Clark of saying, “I will not vote in favor of anything that supports the police department.” It is a sentiment that shows Clark cannot be trusted as an objective and unbiased commissioner, the letter states.

During the commission’s monthly meeting this week, Clark loudly voiced his belief that the police department is intentionally keeping disciplinary matters away from the commission by issuing suspensions of less than 15 days. Under a provision known as Rule 19, only longer suspensions go to the commission on appeal.

Clark suggested that the provision is a way for police to keep their dirty laundry away from civilian scrutiny, and maintain a “good old boys” culture. He said Slay is after him because his remarks are being portrayed as anti-police, and the mayor cannot afford politically to polarize the police union.

On Tuesday, Clark prompted a preliminary vote to drop the threshold of commission involvement to a 10-day suspension.

“Our objective was to make this transition to local control as smooth as possible, and cutting the threshold to 10 days may give them the impetus to start sending more appeals over here,” Clark said.

Clark’s motion to change the rule passed, but it must be voted upon again at the commission’s October meeting.

A public hearing on his removal is set for 9 a.m. Sept. 25 in room 714 of the Carnahan Courthouse downtown.

Should the proposed change even make it to the commission’s agenda, the police union is prepared for a fight, said its business manager, Jeff Roorda.

“It would be a patently illegal breach of contract,” Roorda said. “And if you start tugging at this thread, everything unravels.”

A contract with the Police Officers Association, adopted during negotiations in transferring state control of the department to City Hall, says suspensions of less than 15 days can be appealed to a “summary hearing board” that includes a peer and two higher ranking officers. It has the final word.

Roorda disputed the notion that the rule is intended to shroud police from civilian scrutiny.

“Clark knows this is a hot-button issue, and that’s not at all what’s going on here,” Roorda said. “Our guys surrendered their appeal rights in favor of a summary board.”

Clark has been in Slay’s crosshairs for months.

Earlier this year, Slay called for Clark’s resignation, saying the appointee didn’t have enough time for the position because he spends two months a year in Thailand. Clark said then that causes him to miss only one meeting.

During a commission meeting Tuesday, Clark noted that the commission has upheld the police department’s recommendations on three of the four discipline cases that have come before it. But the reversal in April of Police Chief Sam Dotson’s recommendation to terminate Officer Matthew Schanz following a domestic dispute thrust Clark into the headlines once more.

Dotson and the city of St. Louis are now suing the commission over the reversal.

Dotson said Clark’s belief that the police are trying to avoid public scrutiny is “completely false.”

“We are on the cusp of welcoming a civilian oversight board, so it’s a completely false, uneducated, uninformed statement to say we’re trying to hide,” the chief said.

The Civil Service Commission is an autonomous entity set up by the city charter to review personnel matters, with members appointed by the mayor. Only its votes are public.

Police chief and city want Matthew Schanz fired after alleged domestic violence, but the officer won an appeal to get his job back.

St. Louis may end up suing itself over whether police can appeal discipline to civil service commission

Officers currently have internal board to handle disciplinary appeals

In a letter dated Sept. 15, 2015, Mayor Francis Slay notifies John Clark of an upcoming hearing to remove him from the Civil Service Commission.