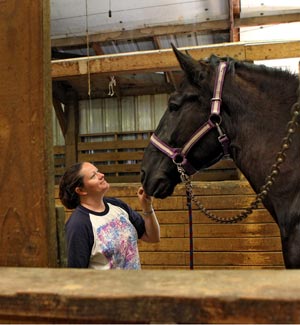 Business manager Jenny Holzum stands alongside Harry, a 10-year-old Percheron Draft Horse, in the stable of the St. Louis Carriage Company just south of downtown St. Louis on Wednesday, May 9, 2012. 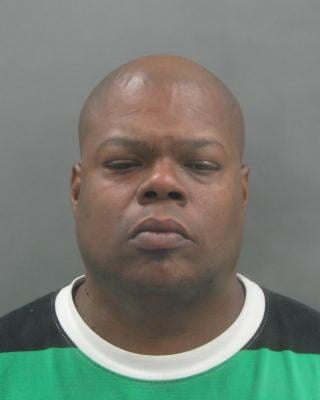 Johnny Medina in a photo provided by St. Louis police.

ST. LOUIS • A man police say attacked the driver of a horse-drawn carriage and took control of the reins in downtown St. Louis on Tuesday night was foiled when the horse instinctively ran back to its barn.

On Wednesday, police said they had arrested a man in a rare case of horse carriage-jacking.

Johnny Medina, 40, of the 4200 block of East Kossuth Avenue, has been charged with one count each of second-degree robbery, third-degree assault and animal abuse. He is being held on a cash-only $30,000 bail at the St. Louis Justice Center.

The St. Louis Carriage Company driver Larry Turner said he was steering his horse, Harry, back to the company's stables about 8:25 p.m. toward the end of his shift. He spotted a Medina sitting on some steps, staring at the carriage as he rolled by.

The man's glare made Turner nervous.

"I can remember his eyes, they were just like a wild animal," said Turner, 60, of Granite City.

According to Turner and police, Medina suddenly rushed the carriage and tried to jump on after Turner turned south on Eighth Street. Turner said he slapped Harry into a gallop but the man caught up and climbed aboard.

"As soon as he got in there, in the calmest voice possible, he said, 'Don't look at me, just drive the carriage,'" Turner said.

A nearby taxi driver who saw what was happening shouted if he should call police, Turner said. When Turner said yes and he looked to see if the man might have a gun, the man stood up and struck him in the head with his cane, Turner said.

"It was cheap wood and it broke immediately," Turner said.

Turner was not seriously hurt and was able to jump off the carriage.

With the attacker in the driver's seat, the horse did what Turner thought, running back to the barn at 1000 Cerre Street. The carriage struck and damaged a trolley parked at the company's lot, police said.

A barn worker inside the stable heard the crash outside, raced outside and tried to control the horse by grabbing the reins and trying to get the man off the carriage, said Jenny Holzum, 34, stable manager.

"They're playing tug-of-war" with the lines, Holzum said.

"I was in utter disbelief," she said. "I'm still kind of speechless about the whole thing. I'm just wondering what this guy's thought process was."

The horse was not hurt.

Turner said the two men who helped him subdued the man with a "choke hold," knocking him unconscious until police arrived.

He was taken to a hospital where doctors said the man was fit for confinement, police said.

Turner, a former jockey who has been driving horse carriages for seven years, said Harry is an "excellent" horse.

"He went home and I knew he would," Turner said. "He's tough. He does his job and he's extremely intelligent. He works hard and he does everything I ask him to do."

Turner says he has a small bump above his right ear but that he is OK. He said he has no reservations about returning to work Friday and feels lucky to have survived. He also said he is grateful to the two military men for helping him.

"It was a good ending to a potentially really bad situation," he said.

As for Harry, the 10-year-old black Percheron draft horse, Holzum said she gave him Wednesday off to rest. She said she is proud of Harry for running home safely without hitting anyone in traffic, and relieved Harry and Turner weren't seriously hurt.

After the ordeal Tuesday night, Holzum rewarded Harry with a massage.

Attacker was on probation for gun-related convictions, court records say.

Mariana Sanchez and Tom Gray were childhood friends in Maplewood. Then their paths diverged. Tom, who was a couple of years older, dropped out…

Business manager Jenny Holzum stands alongside Harry, a 10-year-old Percheron Draft Horse, in the stable of the St. Louis Carriage Company just south of downtown St. Louis on Wednesday, May 9, 2012.

Johnny Medina in a photo provided by St. Louis police.