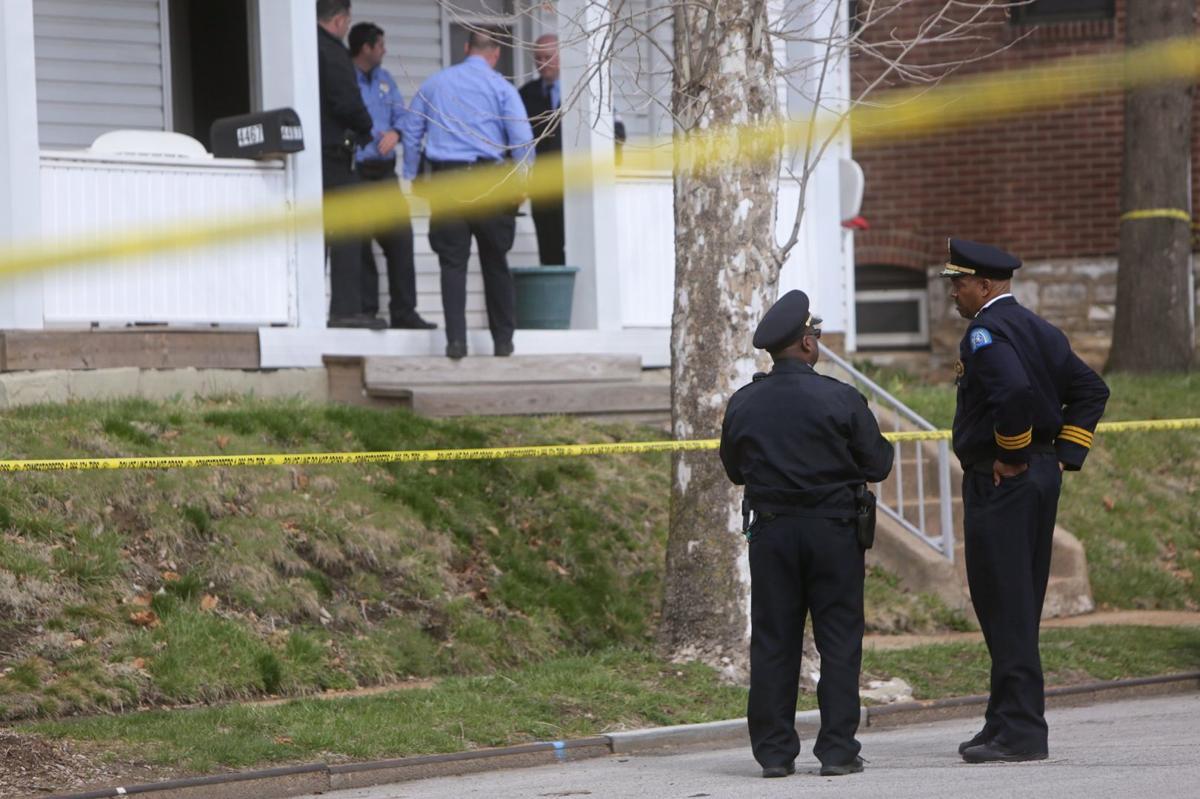 Police investigate a home on Itaska Street in St. Louis' Bevo Mill neighborhood where two people were killed and a third was injured in a shooting on Friday, March 27, 2015. Photo by Cristina Fletes-Boutte, cfletes-boutte@post-dispatch.com 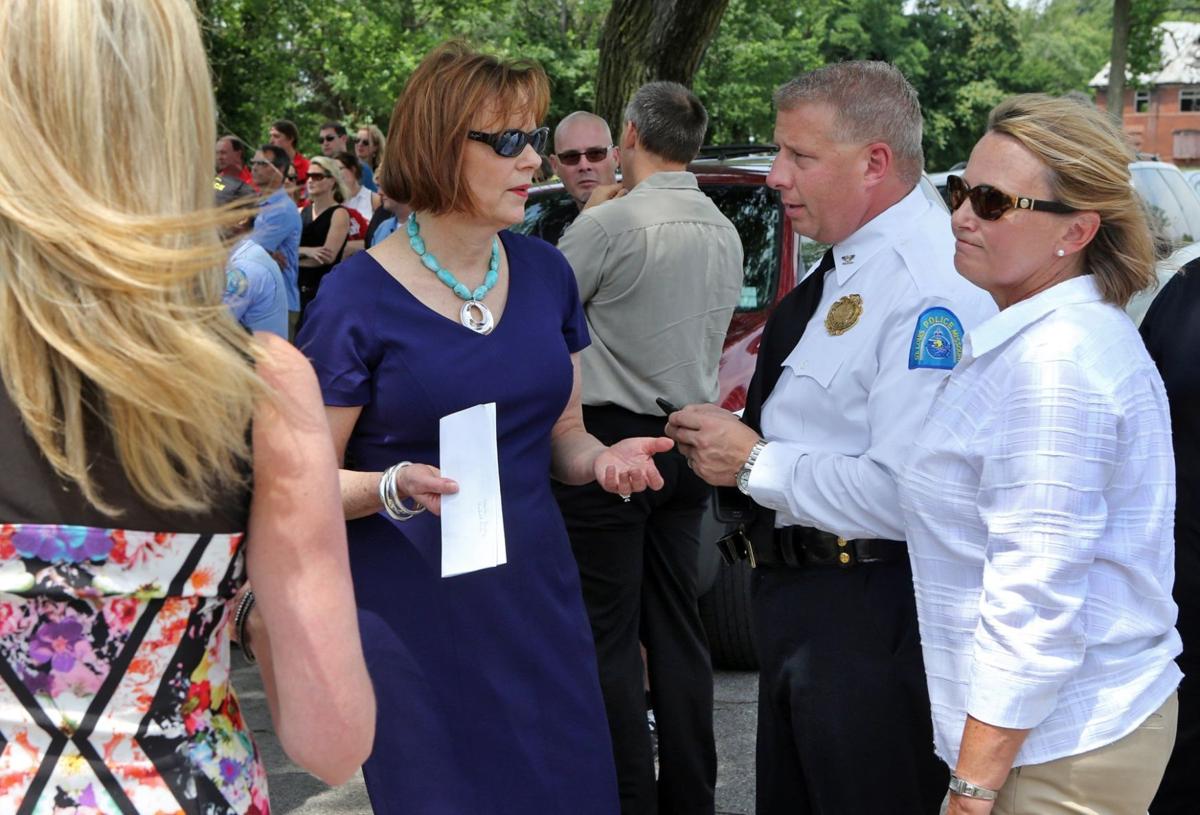 ST. LOUIS • In the face of frustration with a mounting homicide total and a new state gun law, Police Chief Sam Dotson and Circuit Attorney Jennifer Joyce are turning to the feds for help.

The U.S. attorney’s office here has issued federal charges in dozens of gun possession cases after an amendment to the Missouri Constitution made it difficult to get state charges against convicted felons caught with guns.

But Dotson also is taking some homicide cases to U.S. Attorney Richard Callahan, because he believes federal judges and juries are tougher on crime and defense attorneys aren’t as willing to take a gamble at trial, even when witness credibility issues are a concern. He said his detectives were looking for ways to take a case federal from the beginning of a homicide investigation.

“If I have a choice, and there is a nexis to a federal crime, I’ll take it to federal courts because I have better outcomes in federal courts,” Dotson said. “There is more consistency in sentencing from the federal courts, and defendants must serve 85 percent of their sentence. I’m dealing with a state court where a guy can shoot at a cop and get (probation).”

Callahan said the crime rate in the city and the passage of Amendment 5, a gun rights law put before voters last year by the Missouri Legislature, were compelling him to get involved.

“Our role is to not get in the way but help where we can,” he said. “And right now, because of the increasing gun violence coupled with crime, in part created by a state legislature that has a complete disconnect with urban violence, there is a bigger role for us to play right now and we’re there to play it.

Dotson would not disclose how many murder cases his detectives had taken to Callahan’s office, saying only that they typically involved “multiple” victims. He confirmed that one such case involved the killing of three people, including a mother and daughter, in south St. Louis earlier this year.

The homicide total for this year stands in the upper 80s, which is about a 45 percent increase compared with last year. And 2014’s total jumped by about 30 percent compared with 2013.

None of the cases has resulted in an indictment so far, but Callahan said he expected indictments to begin coming in “soon.”

Traditionally, Callahan’s office prosecutes only murders in which a federal official is involved. “But we do prosecute conspiracies involving guns and drugs, and if those conspiracies result in someone being killed, the punishment can go up to life or the death penalty,” he said.

Callahan said his office was not taking cases that Joyce’s office could prosecute, and believed the state prosecutor and local police department were the “first line of defense.”

“But when it comes to these drug killings and gun cases, we have greater resources to address drug murders and gather evidence where the state prosecutor is just overwhelmed by the numbers,” he said.

Joyce said she was not overwhelmed by homicides, adding that she was now sending a prosecutor to homicide scenes to build rapport with witnesses at the beginning of a case.

Police have identified a suspect in about 30, or roughly half, of the city’s homicide cases. As of last week, detectives had taken 27 cases to Joyce’s office for review, and she had issued charges in 18 of them, or about 67 percent of the cases police brought her.

But Dotson believes that when faced with the threat of a federal charge, defense attorneys are more likely to negotiate plea deals rather than take a gamble at a trial with an unfamiliar federal jury composed of residents from the eastern region of Missouri. He also added that federal investigators have access to other strategies and tools that can boost a case when witness credibility is a concern.

Joyce said urban residents tended to be more distrustful of the police, especially in drug possession cases in which an officer’s testimony may be the only evidence. But she said her office had had high success securing homicide convictions.

“People in this city are tired of dead bodies and tired of gun violence,” she said.

GUN CASES AND BEYOND

Voters passed last year an amendment to the Missouri Constitution declaring the right to keep and bear arms “unalienable.” Amendment 5 has made it harder to get charges to stick against convicted felons caught with guns, according to prosecutors.Though backers of the amendment say that wasn’t the intent, Dotson and Joyce say it has closed off a way of getting guns out of the hands of felons through state courts. Callahan’s office has so far issued charges in about 70 gun cases that Joyce said she could not have issued because of Amendment 5. “The feds have really saved the day and taken all of these Amendment 5 cases,” she said.

Joyce said she recalled a time shortly after she took office in 2000 when the Circuit Attorney’s Office, U.S. attorney and police department worked closely together, and homicide totals dropped to the 70s.

“Over time, that relationship eroded, and we are getting back to that,” she said.

Dotson and Joyce are also trying other methods to combat crime. One is a partnership with leaders from Kansas City, where an initiative called the No Violence Alliance, or NoVA, is being credited with dropping the homicide total by about 23 percent. The effort identifies gang members, brings them in for a meeting with police, prosecutors and family members of gun violence victims and pressures them to stop the violence or face the wrath of the legal system.

Joyce and Dotson discussed their plans for the initiative with the Post-Dispatch’s editorial board and reporters last week. Joyce said she was hoping to have the first “call-in” session in St. Louis sometime in August, but she said it would take time to see results.

“It’s going to be a crock pot, not a microwave,” Joyce said.

At issue is whether Amendment 5 negates a state law prohibiting ex-cons from having firearms.

Victims include three people killed earlier this year and a man murdered in 2010.

Editorial: Missouri's cities should stand their ground against gun lobby

A public health 'Castle Doctrine' so Missouri's cities can defend themselves against guns.

Editorial: The penalty for being a stupid kid shouldn't be death

Not even Missouri lets you shoot a child for prowling around your car.

Some answers may come from Kansas City and Manhattan efforts.

Partnership yields critical information and helps police and victims' families see the humanity in each other.

Police investigate a home on Itaska Street in St. Louis' Bevo Mill neighborhood where two people were killed and a third was injured in a shooting on Friday, March 27, 2015. Photo by Cristina Fletes-Boutte, cfletes-boutte@post-dispatch.com