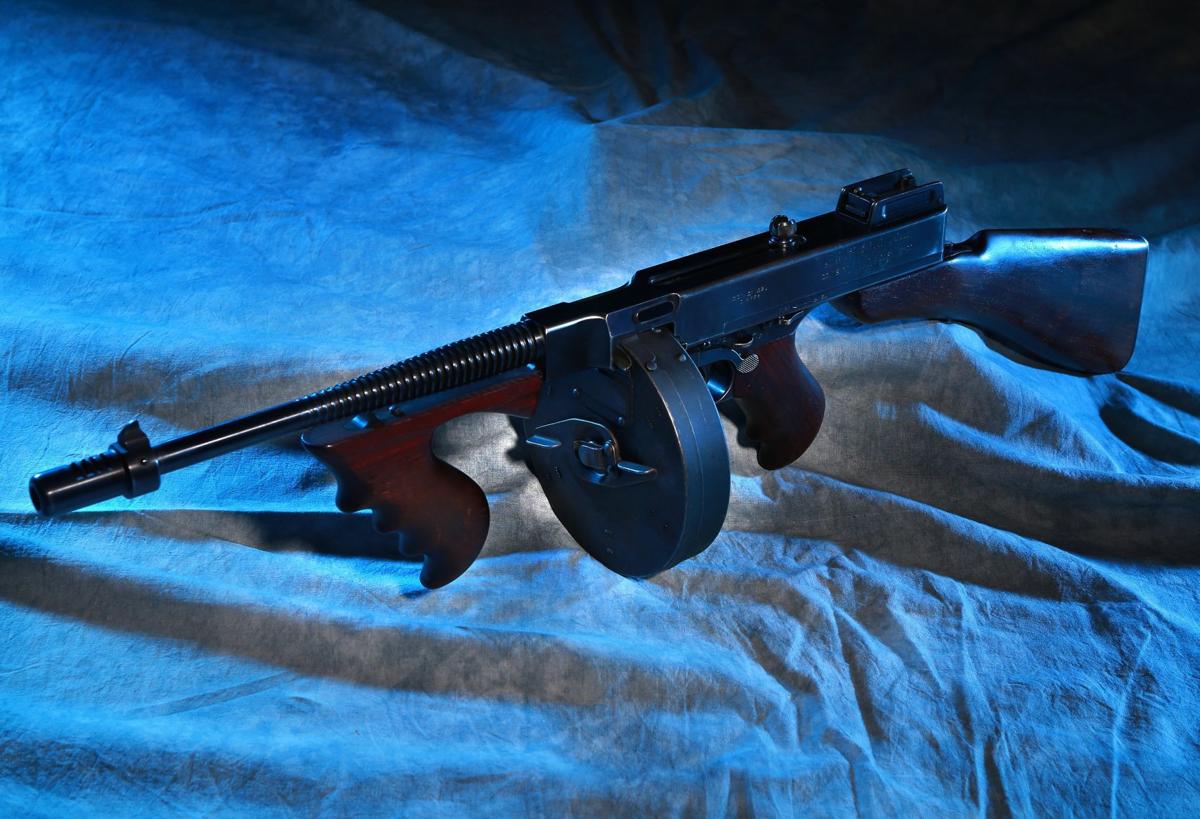 Thompson automatic submachine guns like this one, photographed at police headquarters on Thursday, May 29, 2014, are being sold by the St. Louis Police Department. Photo by Christian Gooden@post-dispatch.com 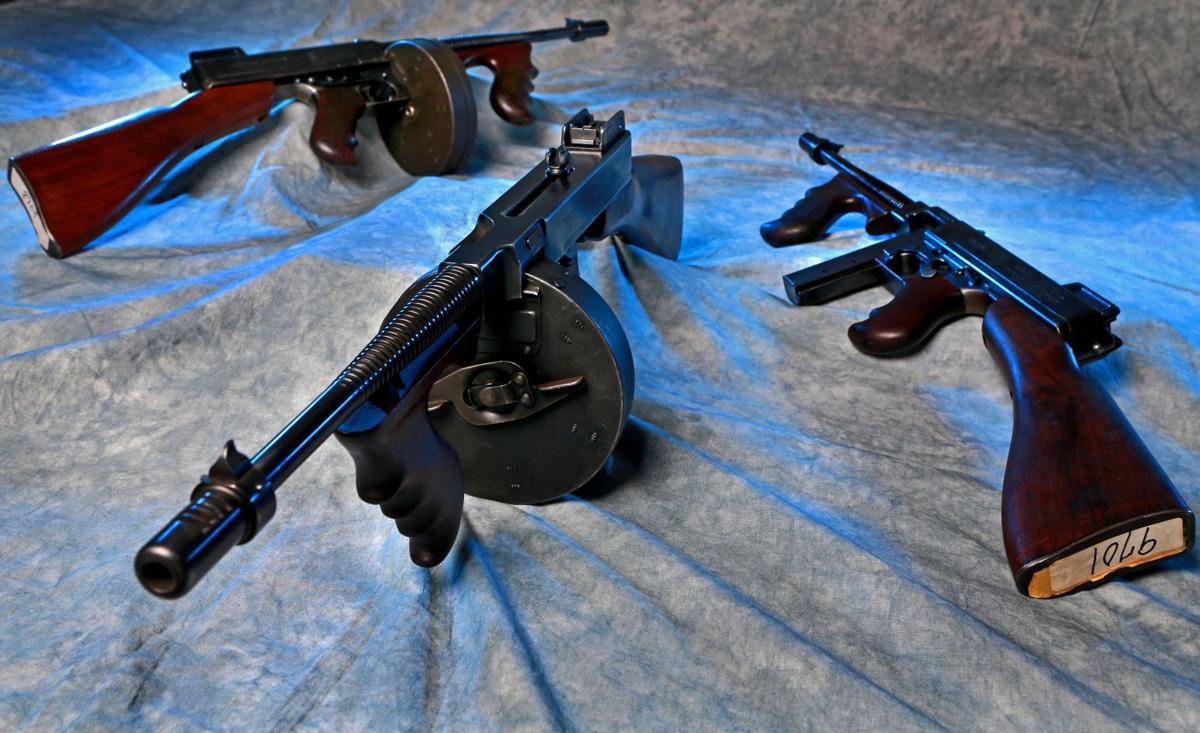 Thompson submachine guns owned by the St. Louis Police Department are photographed at police headquarters on Thursday, May 29, 2014. Photo by Christian Gooden@post-dispatch.com 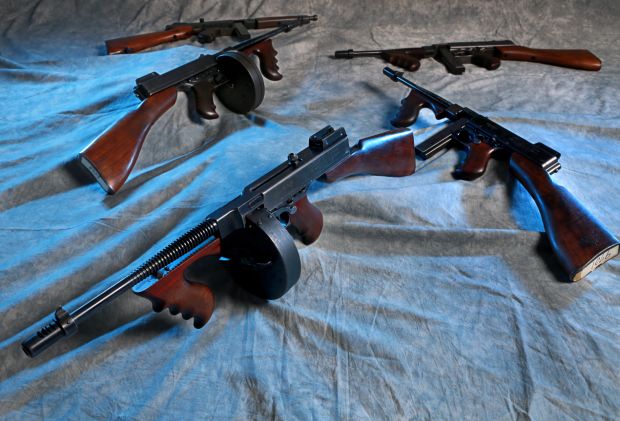 Authentic Thompson automatic submachine guns being put up for auction by the St. Louis Police Department are photographed at police headquarters on Thursday, May 29, 2014. Photo by Christian Gooden@post-dispatch.com

ST. LOUIS • Thompson submachine guns are as much a legend as the bad — and good — guys who fired them.

With as many colorful nicknames as the gangsters whose rat-a-tat-tats roared through the 1920s, the weapon remains an icon of American criminal, military and pop culture history.

No matter what you call it — the “Chicago Typewriter,” the “trench broom,” the “chopper,” the “annihilator” — the Tommy gun is a vintage Hollywood favorite. It was used not only by desperados such as John Dillinger to rob banks and Al Capone’s mobsters in the infamous St. Valentine’s Day Massacre, but also various lawmen and soldiers.

In 1939, Time Magazine declared it “the deadliest weapon, pound for pound, ever devised by man.”

St. Louis police took them out of service perhaps 60 years ago, but 29 are still stored in a basement bunker at the Police Academy downtown, with a 30th in the crime lab. Chief Sam Dotson and some collectors think it may be the biggest police-owned stock of Thompsons in the United States.

And it is about to go on sale.

With the police budget ever-stretched, Dotson said the department is planning to auction off what could approach $1 million worth of the guns in the next six months, and put the proceeds toward new sidearms for the whole force.

It’s necessary, the chief explained, since $1.4 million earmarked for new pistols was slashed from this year’s budget.

The sale, if a little bittersweet, is welcomed by the St. Louis Police Officers Association. It has long lobbied for larger and more powerful .40-caliber pistols to replace the 9mm Berettas that officers have carried for about two decades.

Choosing a new handgun has been part of contract talks with the police union in recent months.

Jeff Roorda, the union’s business manager, understands the lure of the Thompsons. “It’d be nice for nostalgia to have those in the police department forever,” he said. “But the more pressing need now is that officers have firepower that matches the firepower in the hands of the bad guys.”

The department plans to keep at least one of the Tommy guns as a historical piece.

The collection, which includes rare 1921 and 1927 Colts and a model made in 1942, was appraised by a local dealer in May 2012 at $770,000. Police and some collectors, however, think the stash could fetch far more. It is not clear how or when the department acquired the one newer Tommy gun.

The .45-caliber Thompson, classified as a submachine gun because it fires pistol ammunition, was designed by Gen. John T. Thompson, who served during the Spanish-American War and later helped develop weapons for the Army. It gained a reputation as a powerful and reliable weapon that could shoot 1,000 rounds or more per minute.

Thompson was looking for a lightweight weapon for advantage in World War I’s stalemated trench warfare. It became known as the “trench broom” even though it wasn’t ready for the market until the war had ended.

“The Tommy gun has a deep-seated connection to American history from the ’20s to today,” said Bill Troy, president of the Thompson Collectors Association, based in Ellicott City, Md. “It’s a work of art. Among collectors, it’s one of the Cadillac pieces — they’re expensive, they’re rare and they’re well-made.”

The number left in the world is unclear, but Troy said collectors generally believe there may be as few as 25,000 in the U.S.

About 15,000 were made by Colt in the 1920s. Some 1.75 million of an altered model were made during World War II, but many have since been destroyed or exported to foreign armies. A few thousand replicas and later models were made in the ’70s, ’80s and ’90s, but by then, demand shifted to lighter, faster and more powerful weapons.

BEATING THE HOODS TO THE PUNCH

Daniel Waugh, 36, a St. Louis author who has written two books on St. Louis gangsters and a third about a Detroit gang, said in an interview that police of the 1920s in many cities found themselves in an “arms race” against gangsters.

“St. Louis was one of the few cities in America where the cops beat the hoods to the punch” by getting Tommy guns, he said.

Police here bought at least 75 in the 1920s for use by the “Night Riders,” an overnight motor squad that targeted bank robbers and gangsters by raiding saloons and crime hangouts. It’s unclear what happened to 45 of the guns. Police say records of the original purchases were either not kept or disappeared.

A 1921 Globe-Democrat editorial painted the Night Riders in colorful terms: “Now the citizen of evil intent, skulking down dark streets or lurking at alley mouths looking for a chance to do a little porch-climbing or flat-robbing or holding up of unaware, belated residents, is most likely to have a motor car appear mysteriously in his immediate vicinity … It is the police car against the thieves’ car, the night-riders of public security against the night-riders of violence and dark deeds.”

Fifty Tommy guns arrived for the Night Riders in October 1921, according to the Post-Dispatch, which characterized the squad’s hunt for criminals during Prohibition as “red hot.” The department bought 25 more in 1927.

Whether the guns ever killed anyone — or if they were even used on duty — is a matter of debate. The guns have been used in training sessions over the years.

The St. Louis Police Journal wrote in 1927 of detectives training with the guns by firing from moving vehicles at a moving armored truck driven by an officer: “When he heard the incessant rattle of the .45-caliber bullets from the submachine guns on the steel, he felt that sensible bank bandits should leave St. Louis post haste.”

Police Sgt. Christopher “Blake” Tucker, who oversees the department’s firearms division, believes officers may have carried them into the 1950s, before adopting more modern arms.

“Some of these guns have souls on them, I’m sure,” Tucker said.

INTO THE RIGHT HANDS

The department wants to make sure the guns don’t take any more souls. “We want to be selective and make sure these aren’t going into the wrong hands,” Tucker said.

High prices and federal restrictions should help see to that.

The cheapest of the collection, an Auto-Ordinance/Savage M1 from 1942, is appraised at $14,000. The stars are two 1921 Colts, each valued at $31,000. (The department also has two World War I-era Lewis machine guns, believed to have been lent by the FBI, which are not for sale.)

Private possession of a fully automatic weapon requires a federal license. Obtaining the permit can take up to year. An applicant must pass a background check, pay a $200 federal tax and obtain approval of the local police chief.

Despite the obstacles, St. Louis police are optimistic that collectors will respond to the opportunity.

“Like a Bel Air, or a Duesenberg, or a Harley-Davidson motorcycle, or any number of truly classic American machines, the Thompson is easy on the eye, familiar, and comfortable,” wrote Bill Yenne, author of “Tommy Gun, How General Thompson’s Submachine Gun Wrote History.” “Like these machines, it is part of our culture, part of our heritage, and an important part of our history.”

Police contract would be first since city took over control of the department; it makes the annual fitness test incentive-based instead of mandatory.

At issue is a possible change from 9 mm handguns to .40-caliber, and allowing police to carry their own rifles.

Pulled from the archive: Post-Dispatch stories about the Night Riders

Thompson automatic submachine guns like this one, photographed at police headquarters on Thursday, May 29, 2014, are being sold by the St. Louis Police Department. Photo by Christian Gooden@post-dispatch.com

Thompson submachine guns owned by the St. Louis Police Department are photographed at police headquarters on Thursday, May 29, 2014. Photo by Christian Gooden@post-dispatch.com

Authentic Thompson automatic submachine guns being put up for auction by the St. Louis Police Department are photographed at police headquarters on Thursday, May 29, 2014. Photo by Christian Gooden@post-dispatch.com