St. Louis police watchdog group formed after Ferguson has been undermined for years, report says
0 comments
Share this
{{featured_button_text}}
1 of 3 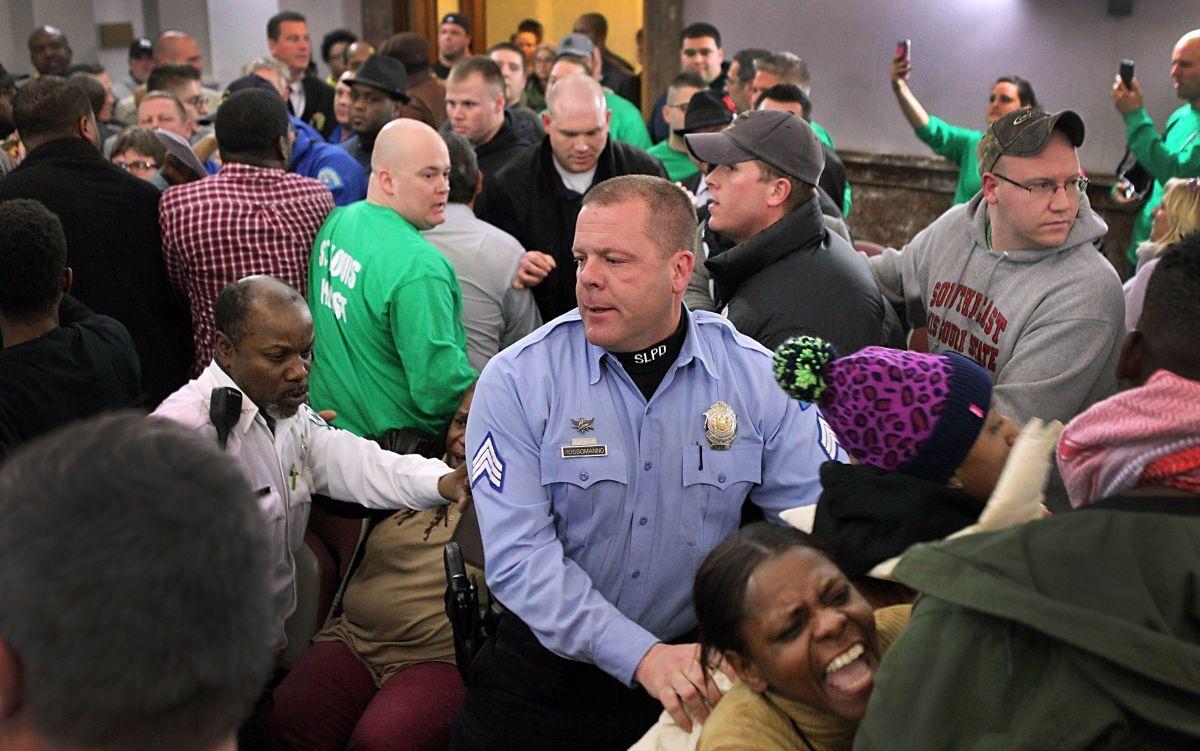 File photo - Wanda Brandon cries out as St. Louis Police Sgt. Brian Rossomanno moves people out of the way as a meeting on proposals to create a civilian oversight review board got out of control at City Hall on Wednesday, Jan. 28, 2015. Photo by Robert Cohen, rcohen@post-dispatch.com 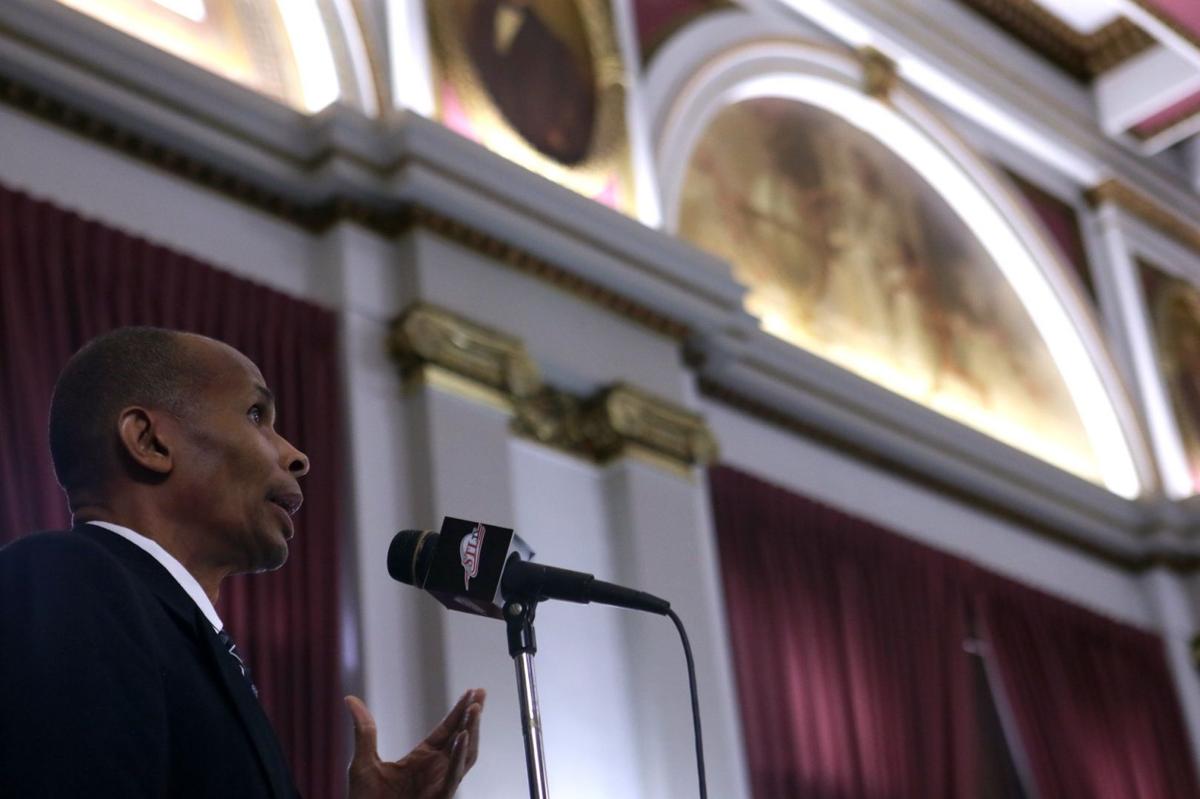 Alderman Terry Kennedy, chairman of the city's public safety committee, defends a police oversight bill after it had been in debate for nearly three hours before coming to a vote on Monday, April 20, 2015. "I have never seen a perfect piece of legislation," said Kennedy after several aldermen voiced their concerns with the bill. "What is our alternative?" he added. The bill was approved in a vote of 17-8 Photo by Cristina Fletes-Boutte, cfletes-boutte@post-dispatch.com 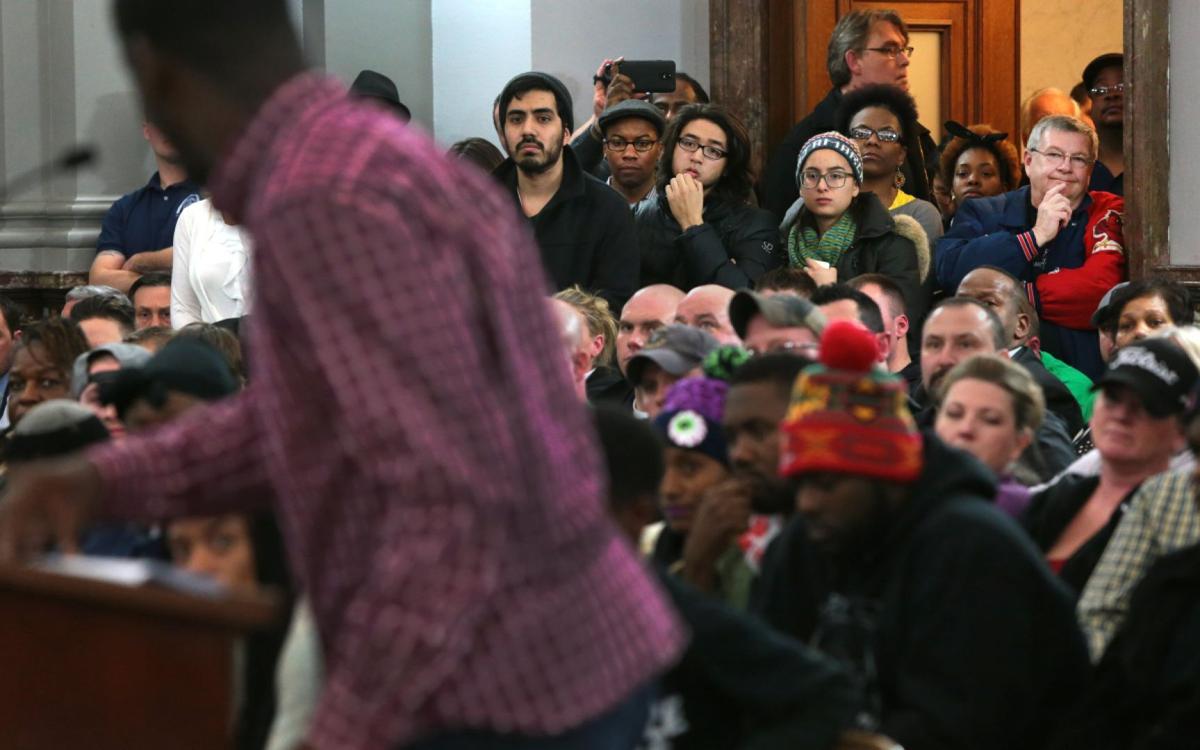 ST. LOUIS — The St. Louis Civilian Oversight Board, created in response to calls for police reform after Ferguson protests in 2014, has been blocked for years from its duties of reviewing police shooting investigations and most civilian misconduct complaints, according to a report released by the board Monday.

The 79-page report details the board’s first four years, from 2016 through 2019. It found that none of the St. Louis police department’s 21 investigations into fatal police shootings in that time — and only about 10% of all internal affairs investigations — were turned over to the board for review.

The report explains that the board is supposed to review police shooting investigations after the department completes them. But it cites a web of bureaucracy that has resulted in no case being considered “completed,” despite the oldest one happening more than five years ago.

Civilian Oversight Board commissioner Kimberley Taylor-Riley, who oversaw the report, said she hasn’t gotten a straight answer on why the investigations remain open.

Problems revealed in the report illustrate why St. Louis is among several U.S. cities that have formed civilian boards, only to find they lack the structure or cooperation to fulfill their role as a significant civilian check on police.

Taylor-Riley says she is hopeful the St. Louis board can get the reforms it needs to become more effective.

“I think we’ve been effective to the degree that we were able,” Taylor-Riley said. “And now that this information is out, I hope we will see a huge difference. I think there is support for the changes we need.”

Nick Dunne, a spokesman for Mayor Tishaura O. Jones, said the mayor and her public safety department, which oversees the board, are reviewing the report.

Within her first two weeks in office, Jones has signaled support for improving the board’s process. Last week, she signed an executive order closing a loophole that’s prevented some complaints from getting to the board. She also supported a city budget plan that adds about $300,000 to the civilian oversight department’s budget to create a separate civilian review board for complaints related to St. Louis jails.

“The mayor ran on police accountability,” Dunne said. “So she’s going to take seriously what the civilian oversight board is saying needs to change.”

St. Louis police reform advocates pushed for civilian oversight for decades, but the reform movement after the police killing of Michael Brown in Ferguson made it happen.

In late 2014, with the St. Louis area at the center of the national discussion on police reform, former Alderman Terry Kennedy filed a bill to form the board, with support from then-mayor Francis Slay.

The debate over the board’s formation was contentious amid months of protests. A public hearing on the matter in early 2015 drew hundreds of people packed shoulder-to-shoulder and erupted in a physical altercation between those on opposite sides of the issue.

The St. Louis Police Officers Association resisted the board, arguing it would prevent officers from doing their jobs by adding bureaucracy. Some aldermen insisted the bill didn’t go far enough to hold police accountable.

The tension resulted in a compromise: The board would be established, but it would lack the power to subpoena witnesses. That power was added through an amendment in 2018, though the board has yet to subpoena anyone because it hasn’t found a way to legally serve them, Taylor-Riley said.

The aldermen voted 17-8 in April 2015 to create the seven-member board. Members are volunteers appointed by the mayor and approved by the aldermen. The board also has four full-time staff members: a commissioner, two investigators and an administrative assistant. Its budget this fiscal year was $317,000.

The ordinance barred the board from interfering in police shooting investigations, though it could review those cases when investigations concluded. It also could not review internal complaints generated from members of the department and review of complaints that could result in criminal charges could be delayed.

The board could make recommendations to the police chief if it disagreed with a policy or internal misconduct investigation, but the chief would not be bound to follow the recommendation.

“Some will say this goes too far,” Slay said when the plan was introduced. “Some will say it doesn’t go far enough. But, our citizens want us to work out our differences and address the issues that divide us. That’s what we did.”

Barton was in charge of the board when it fully launched in early 2016 through September 2019. She soon noticed the police department was sending only some civilian complaints to the board, she said.

The problem centered on two forms. The ordinance forming the board had created a Joint Civilian Complaint Form — a way citizens could file complaints to the oversight board as well as the department. But the department continued to take complaints through its own form, and those have not been sent to the board, according to the report.

“What the ordinance didn’t say was that the department had to use only that form,” Barton said.

Jones signed an executive order last week mandating that the police department give the board access to all civilian misconduct complaints, regardless of the form on which they were submitted.

The exception that delays the board from reviewing cases that could result in criminal charges meant the board still hasn't seen some of the most serious civilian complaints, Barton said. For example, allegations of mistreatment of protesters by St. Louis police following the 2017 acquittal in the murder trial of former St. Louis police Officer Jason Stockley led to multiple lawsuits, but complaints have not reached the board, Barton said.

The report released Monday cites other barriers, including the department’s disregard of a rule requiring it to turn over investigations within 90 days. The department met that deadline only 16% of the time in 2019, the report found.

The report listed names of 21 people killed in fatal police shootings. None of those investigations have been turned over to the oversight board, despite clear language in the ordinance tasking the board with reviewing them.

“I had a mother of someone killed in a police shooting who used to call me asking when we would have information,” Barton said. “That’s the kind of transparency the board was set up to give, but I had to tell her we still hadn’t gotten anything.”

The problem is Taylor-Riley isn’t even sure if the Deadly Force Review Board exists.

“I haven’t been able to find anything in the municipal code laying out who is supposed to be on the board or how often they meet,” she said.

John Chasnoff, a member of the Coalition Against Police Crimes and Repression, was among the advocates who pushed for the oversight board for years before it was formed.

“It’s been frustrating to see the police department resist it rather than working cooperatively with the board,” Chasnoff said.

“There’s been bumps in the road,” Chasnoff said. “But I think reforms can be made to return the board to spirit of accountability it was created under.”

File photo - Wanda Brandon cries out as St. Louis Police Sgt. Brian Rossomanno moves people out of the way as a meeting on proposals to create a civilian oversight review board got out of control at City Hall on Wednesday, Jan. 28, 2015. Photo by Robert Cohen, rcohen@post-dispatch.com

Alderman Terry Kennedy, chairman of the city's public safety committee, defends a police oversight bill after it had been in debate for nearly three hours before coming to a vote on Monday, April 20, 2015. "I have never seen a perfect piece of legislation," said Kennedy after several aldermen voiced their concerns with the bill. "What is our alternative?" he added. The bill was approved in a vote of 17-8 Photo by Cristina Fletes-Boutte, cfletes-boutte@post-dispatch.com 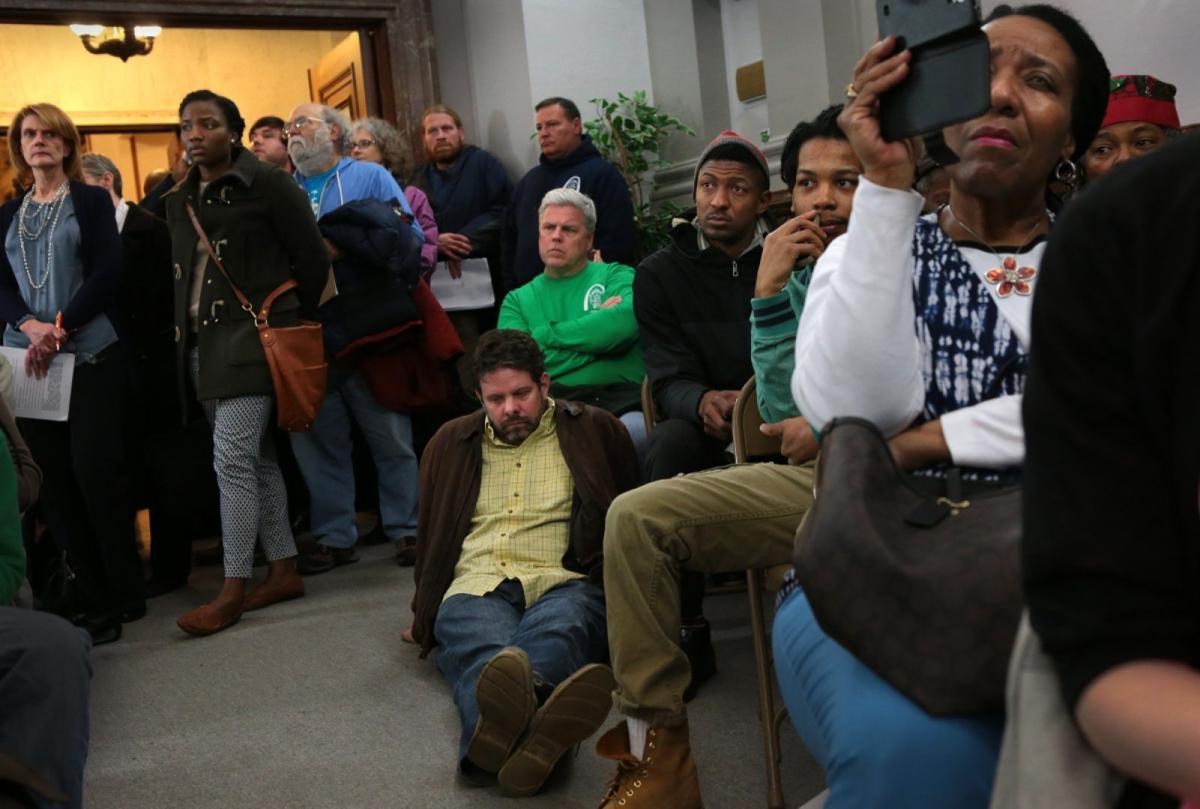 Some people sat on the ground at an overflow committee meeting where St. Louis aldermen heard testimony for a proposed civilian oversight review at City Hall on Wednesday, Jan. 28, 2015. Photo by Robert Cohen, rcohen@post-dispatch.com