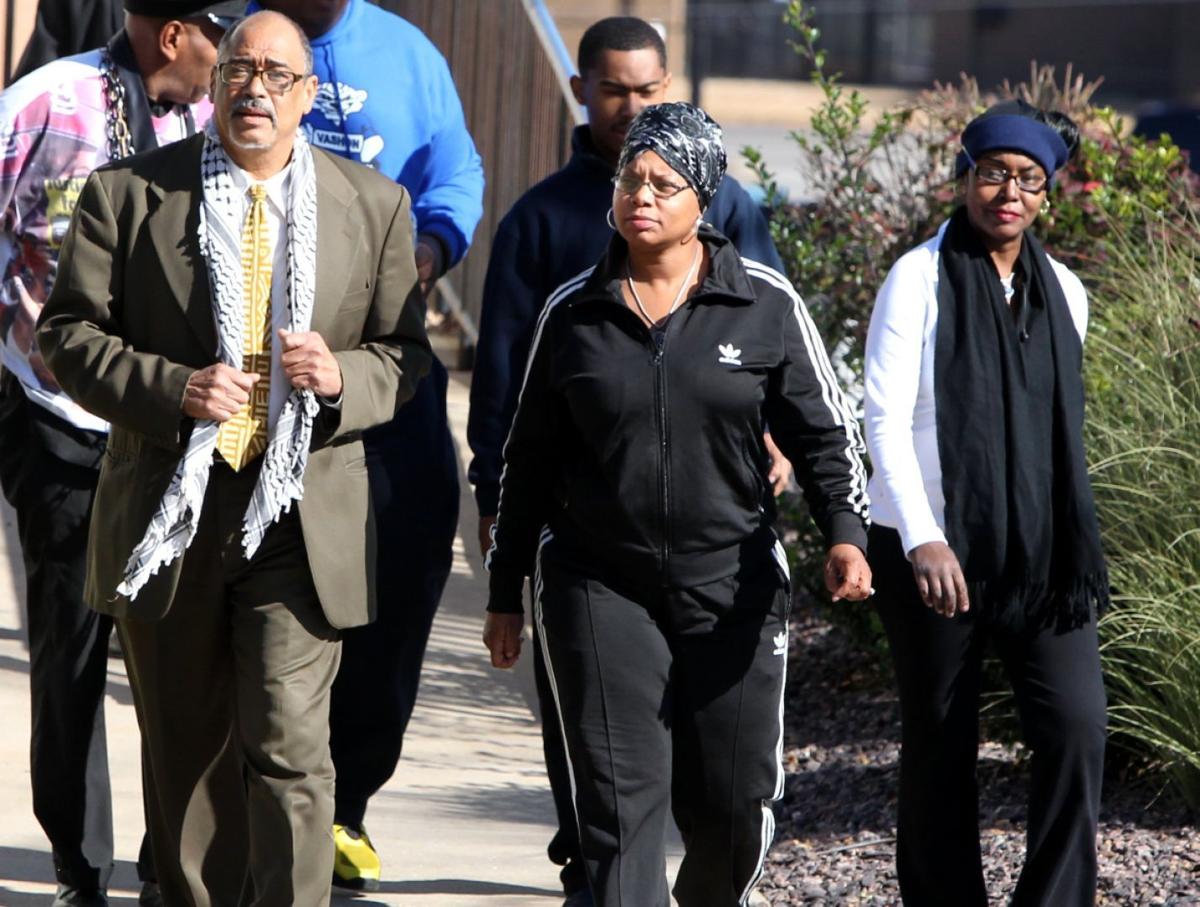 Missouri State Sen. Jamilah Nasheed (center), D-St. Louis, leaves the St. Ann police department with her supporters on Tuesday, Oct. 21, 2014, after being released on a charge of failure to obey lawful order of police. Nasheed was arrested outside the Ferguson police department Monday night in an act of civil disobedience protesting the shooting death of unarmed teenager Michael Brown by Ferguson police officer Darren Wilson. Photo by Christian Gooden, cgooden@post-dispatch.com 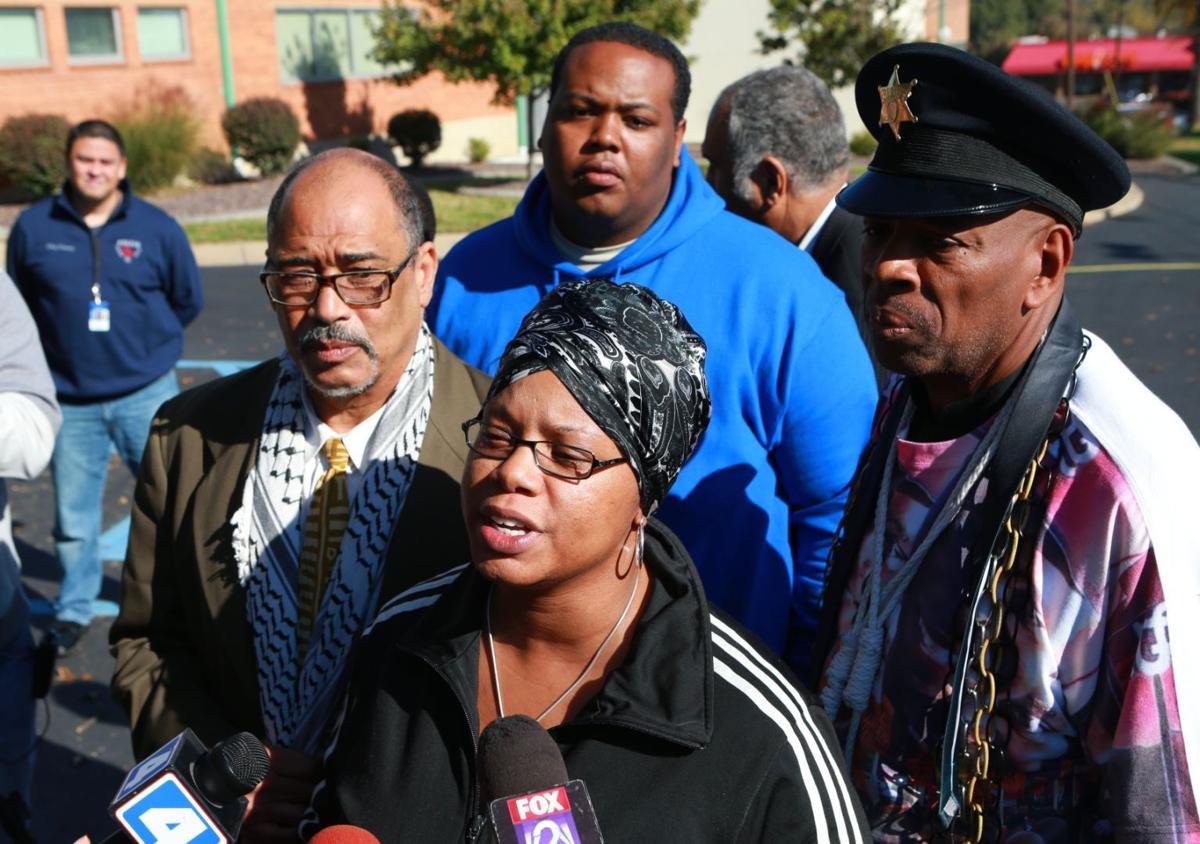 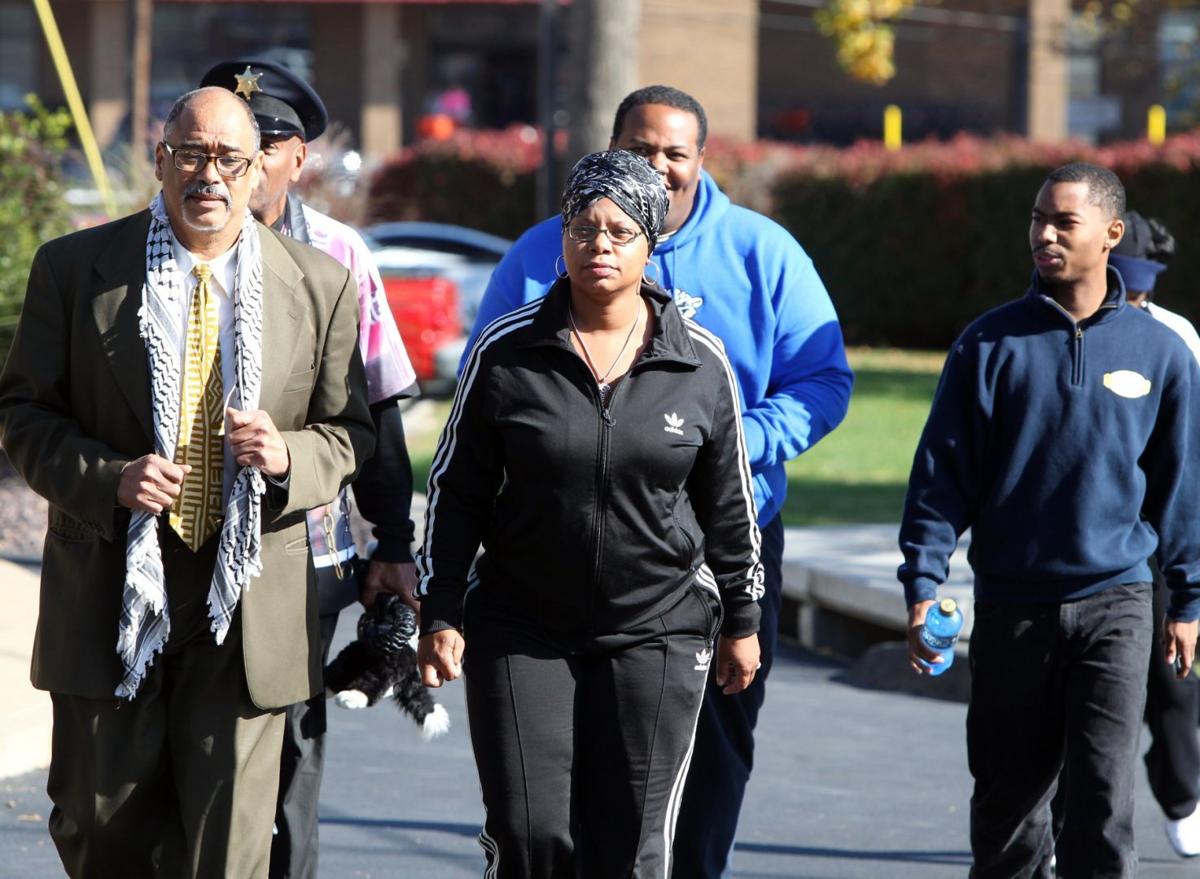 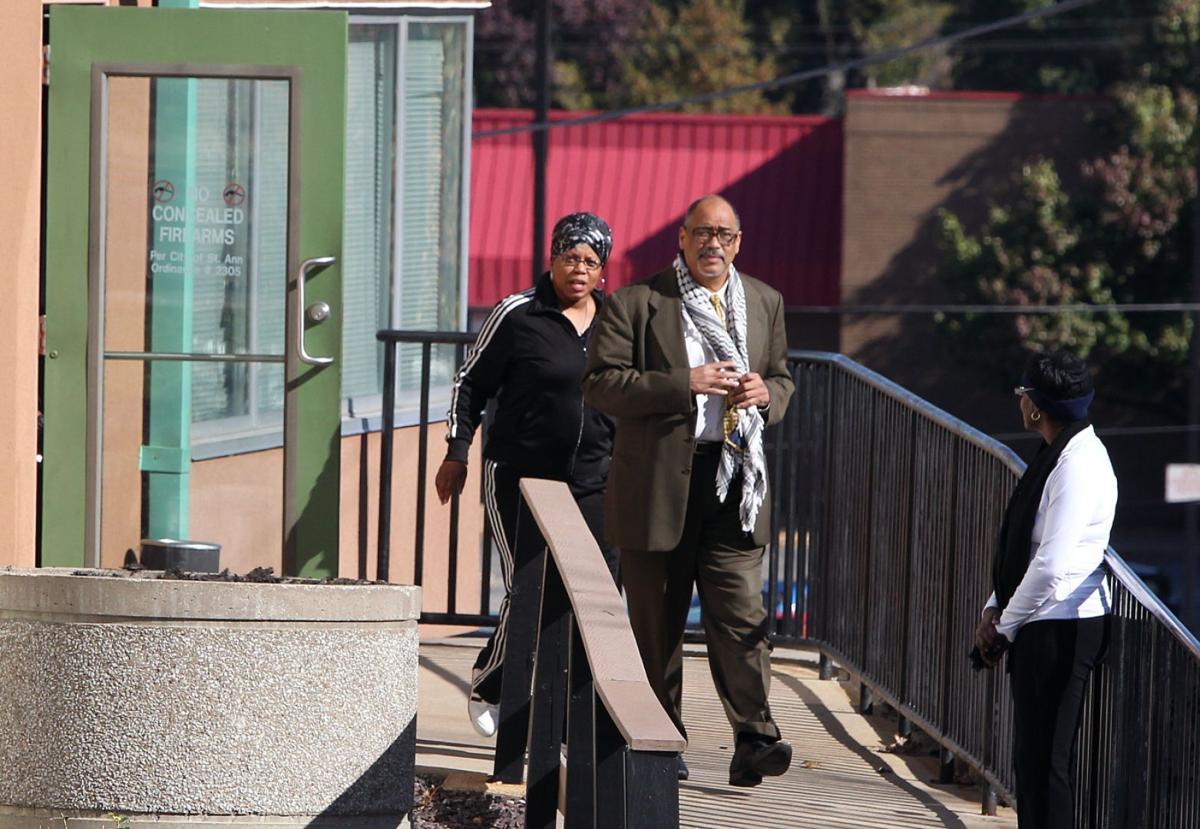 ST. ANN • State Sen. Jamilah Nasheed walked out of jail Tuesday and told a gathering of reporters that her arrest Monday evening in Ferguson was a “symbolic” act to promote peaceful protest.

Nasheed was arrested shortly after 8:30 p.m. when she walked into South Florissant Road outside the Ferguson police station and refused to return to the curb. She spent the night in the St. Ann jail, and was released about 10:50 a.m. Tuesday after someone posted her $600 bond in Ferguson.

“I wanted to send a message to all the protesters that we have a long road ahead of us these next three weeks,” Nasheed said, apparently referring to estimates for when the St. Louis County Grand Jury might return a finding in the shooting death Aug. 9 of Michael Brown, 18, by a Ferguson police officer. “It's OK to protest, it's OK to exercise your First Amendment rights, it's OK to go to jail for a cause, but it's not OK to destroy communities.

"It's not OK to burn down businesses," she continued. "It's not OK to protest violently in the name of Michael Brown. We all want justice, but we don't want violent protests.”

Some protesters had grumbled about Nasheed showing up Monday night and being arrested in short order. They said that they have been protesting nightly at the station and avoiding arrest by following police instructions.

“Everyone is going to criticize, but I had a message to deliver,” Nasheed said of the criticism.

Nasheed stood with her lawyer, Eric Vickers, and protest leader Anthony Shahid as she spoke to reporters in the St. Ann police parking lot.

Nasheed spent the night in the St. Ann jail through an agreement with Ferguson, which is renovating its own jail.

Ferguson Chief Thomas Jackson said Nasheed had a 9 mm handgun in her possession when she was arrested. Nasheed, who says she has a concealed carry permit, told the Post-Dispatch she always carries her gun.

St. Ann Police Chief Aaron Jimenez told reporters that Ferguson officers asked his department to give Nasheed a breath test for alcohol, but she declined.

Nasheed said she doesn't know why officers asked to give her the breath test and said she was not intoxicated.

She called the release of information about her gun and the breath test request "character assassination" and said she doesn't trust Ferguson police.

FERGUSON • State Sen. Jamilah Nasheed was taken into custody Monday night in front of the Ferguson police station after she walked in the street when police told protesters not to do so, a police spokesman said.

St. Louis County Police Sgt. Brian Schellman confirmed that Nasheed, D-St. Louis, was arrested along with a man she showed up with about 8:30 p.m.

“They were told multiple times to leave the street, and they were arrested,” Schellman said.

Nasheed, who was charged with violating a Ferguson ordinance about blocking a roadway, was released Tuesday morning.

Attorney Eric Vickers said late Monday that he represents Nasheed and that she had refused bond. He also seemed to confirm that her arrest was intentional.

"She wants to present this as an alternative to any sort of violent action," Vickers said, referring to the potential for violence if a grand jury fails to indict the Ferguson police officer who shot and killed Michael Brown in August.

Brown's death has been the focus of nightly protests in Ferguson.

Videos he posted of Nasheed on Twitter under his user name, @search4swag, shows Nasheed walking away from officers with her hands up, as police come up to arrest her. She smiled as they fastened her wrists. A man behind her was also arrested, Rice said. He said the man was with Nasheed.

“She was the only one marching by herself and some dude she marched with,” he said. “All of us protesting have been here all day. Then she shows up maybe 15 minutes ago, starting this crap. She was not over here protesting with us at all.”

Hours after Nasheed's arrest, activist Anthony Shahid was met with boos when he gave a crowd an update on the lawmaker's arrest. Most of the protesters seemed unsupportive of the lawmaker.

Catherine Jackson, 62, of Bridgeton, is among those who have held nightly protests at the police station. She didn't know who Nasheed was when the lawmaker made her sudden appearance Monday night and she later mused that Nasheed "has constituents she needs to impress."

But she saw an upside to the state senator's stunt.

"Anything that brings attention back to Ferguson is good," she said.

Nasheed recently announced she will introduce a bill when the Legislature returns to session in January to impose a mandatory 10-year sentence on anyone convicted of a gun-related crime.

She and other activists are asking for a Justice Department investigation into the death of VonDerrit Myers Jr., who was shot and killed by an off-duty St. Louis police officer in the Shaw neighborhood on Oct. 8. St. Louis police said Myers, 18, had shot at the officer.

On at least one night, she was also among those who gathered in protest in that neighborhood.

Attorney Jerryl Christmas came to the scene after Nasheed’s arrest Monday night. “She’s down with the struggle,” Christmas said. “These are her constituents. She’s one with what’s going on here and in the city.”

He added: “If somebody of her stature gets arrested, that ups the ante.”

While reporters were waiting for Nasheed to be released from jail Tuesday morning, Dave Spence dropped by to discuss Ferguson 1000 Jobs, a new organization he has formed to promote employment in north county. Spence, a businessman, was the Republican candidate for governor in 2012, losing to Gov. Jay Nixon.

Spence grew up in Overland. He said he wants to help create jobs in Ferguson and other north county communities.

Demonstrations planned at four other sites Wednesday afternoon and evening.

Missouri State Sen. Jamilah Nasheed (center), D-St. Louis, leaves the St. Ann police department with her supporters on Tuesday, Oct. 21, 2014, after being released on a charge of failure to obey lawful order of police. Nasheed was arrested outside the Ferguson police department Monday night in an act of civil disobedience protesting the shooting death of unarmed teenager Michael Brown by Ferguson police officer Darren Wilson. Photo by Christian Gooden, cgooden@post-dispatch.com