ST. LOUIS — Paramedic Trent Bowers received a call on a recent January night: A woman had been beaten at a St. Louis Family Dollar store.

When Bowers arrived, the woman showed him injuries across her body.

“This looks like it’s out of place,” he said, looking at her knee. He suggested she take the ambulance to the hospital, but the woman said she couldn’t afford it without insurance.

In less than an hour, a recording of the exchange reached hundreds of thousands of viewers on national TV’s “Live Rescue,” an A&E reality series that features “almost live” feeds of fire crews and emergency medical service units in seven U.S. cities.

Since its premiere in April, the St. Louis Fire Department has been one of the show’s most reliable stars.

There are pre-taped segments, but the big draw is the “live” unpredictability. Footage of emergency responses airs Monday nights about 20 minutes after it’s filmed. Viewership has reached at least 1.3 million some weeks, according to The Hollywood Reporter.

St. Louis fire Chief Dennis Jenkerson considers the partnership with “Live Rescue” a success, showing off the skill and humanity of the busy department. But the arrangement also has detractors who criticize using the misfortune of people who call for help as entertainment on national TV. Critics also worry that film crews risk violating federal privacy laws aimed at protecting patients.

St. Louis resident Dana Love, for example, was filmed after she was injured in an October car crash.

Love was in intense back pain waiting for an EMS crew to arrive at the scene of the crash in the Southampton neighborhood. When an ambulance pulled up, she saw the TV crew’s lighting man and a television camera get out of the ambulance before she could spot a paramedic. Her sister on scene began yelling for the cameras to move away, but Love says they continued filming and followed her into the ambulance as she received medical treatment.

“It was a scary ordeal,” Love said. “You’re thanking God you’re still breathing and just worried about being taken care of and then, bam, there’s a TV camera in the ambulance whether you like it or not.”

Jenkerson acknowledges there have been moments when the camera crews got too close, but he said those have been addressed and the crews typically step back as soon as a patient says they don’t want to be filmed.

”If there’s ever a question of privacy, then it’s no problem, that call doesn’t make the show,” he said.

“Live Rescue” takes its format from the wildly successful “Live PD,” another “almost live” show on A&E that follows police.

Both programs are created by Big Fish Entertainment, a part of MGM, which produces reality shows such as “Black Ink Crew” about tattoo artists and “Love and Hip Hop Hollywood.”

Quickly after its launch in 2016, “Live PD” ranked among the most-watched cable TV shows on Friday and Saturday nights, and it inspired spinoffs focused on female officers, police dogs and eventually “Live Rescue.”

The show’s producers set their sights on St. Louis about a year and a half ago, in part because of the high volume of EMS and fire calls in the city, Jenkerson said.

The chief thought the show would be a nice spotlight for people in his department.

“They’re not the highest paid firefighters or medics in the region. They are the most overworked,” he said. “So there has to be an inner drive and a compassion for these people who love what they do. That was important to me that the show would show that.”

It’s not the first time a St. Louis city department gave access to reality show cameras. In 2016, former St. Louis police Chief Sam Dotson invited crews with A&E’s “The First 48” to follow homicide detectives. The decision had critics, including a mayoral candidate at the time, Treasurer Tishaura Jones, who told reporters that she thought the show could hurt police relationships with the community.

The series completed segments in St. Louis, but they have not yet aired because the cases haven’t been fully resolved, the police department said this month. 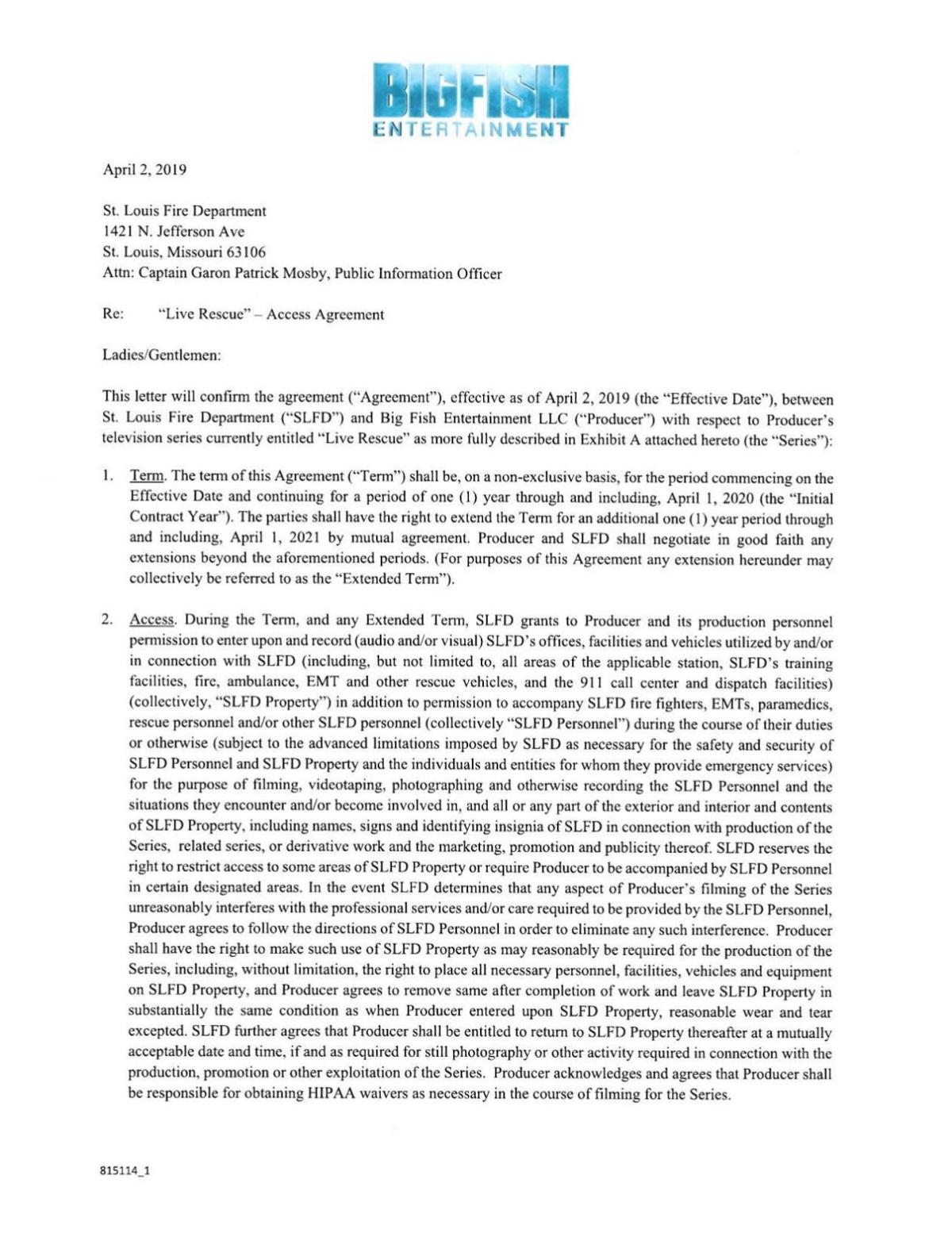 TV tightrope actOn a typical night of “Live Rescue,” Jenkerson sits at home for hours watching a live stream of the footage from three units to approve clips for “almost live” segments.

In the New York control room, producers switch between the new footage, pre-taped segments and color commentary from analysts, including Mosby, the St. Louis fire spokesman who flies to New York for every episode. The show covers his travel and expenses, and Mosby is not paid for his role, Jenkerson said.

St. Louis calls that have aired so far range from the goofy to gravely serious: A woman at a senior center with a bowel issue yelled for her cellphone, a man broke his ankle during a bachelor party attempting to strike a stop sign, and one patient with seizures rapped with paramedics on his ambulance ride. Other clips include shootings, overdose calls, mental health emergencies, car wrecks and fires.

In November, the cameras captured a firefighter having to tackle a man whose car was on fire after he threatened the first responders. In a July fire, footage shows chaos as people in north St. Louis run from smoke bursting out of a house and yell that there are children inside. After learning the children had escaped, firefighters put out the flames.

For Jenkerson, one of the moments that best showcased his department was paramedic and series favorite Laticha Vaughn’s emotional response after arriving to a call where a young child had been shot. A tearful Vaughn called her father, a former St. Louis fire captain, for support.

”That was a tough scene to watch for me because I saw how emotional Laticha was getting … and at some point some part of that becomes private,” Jenkerson said about his decision to include it on the show. “When she picked up the phone to call her dad I said, ‘Let’s cut it there.’”

One question hangs over “Live Rescue” for some viewers: How can segments air without violating the privacy of the people being treated?

A producer with the show typically asks people who are filmed to sign releases before footage airs, Jenkerson said. Faces are often blurred when the cameras capture someone who can’t give consent because of injury, intoxication or mental state.

According to St. Louis University Law School professor Matt Bodie, those measures do not eliminate the risk that the show could face lawsuits claiming privacy violations.

For the most part, filming someone on a public street is legal without consent because there is no expectation of privacy, Bodie said.

”Problems come if there is intrusion into an expected zone of privacy,” he said.

HIPAA rules prevent medical providers from exposing patient health information, Hales said. Regulators go so far as to advise doctors not to discuss a patient’s condition on an elevator so it’s not overheard.

”EMS are the special forces of health care. That makes for great reality television,” Hales said. “But they must follow HIPAA rules to protect patient privacy.”

The U.S. Department of Health and Human Services, which enforces HIPAA, says in its guidelines that medical providers should not allow crews to film areas where patient information would be disclosed without prior consent. Blurring a face or disguising a voice doesn’t necessarily solve the problem because HIPAA was violated by the filming itself, according to the agency.

In New York, a woman, Anita Chanko, was watching the medical reality show “NY Med” when she recognized footage of her husband receiving emergency surgery after he was hit by a sanitation truck. He later died from his injuries and the show never asked for her family’s consent to air the material, she told The New York Times. Her husband’s face was blurred but she recognized his voice and realized she was watching him die on TV.

She reached a $2.2 million settlement with the hospital.

So far, no such litigation has faced St. Louis in connection to “Live Rescue.”

Big Fish producers say that the show is a form of journalism and follows the same rules a local news photographer or cameraman does at a crime scene.

The difference, however, is that news outlets typically don’t have formal contracts with the fire department ensuring inside access.

In the St. Louis department’s agreement with the producers, the department agreed to assume legal responsibility for any HIPAA violation, while the show agreed to compensate the city for any other legal action and carries a $1 million commercial liability insurance policy.

So far, Jenkerson said, there have been just a handful of complaints compared to the positive response.

Fire and EMS workers have received fan letters and community support, and at least one paramedic even moved to St. Louis to join the department after watching the show, he said.

So would Jenkerson recommend that other cities sign on for “Live Rescue”?

“I would tell them it’s a lot, lot of work,” he said. “A lot of it is done after hours. You’re sitting there for two and a half hours and have to watch the feed. If something goes wrong, it gives the department a black eye, and you’re trying to make the city look good. You’re trying to give the people who do this work a pat on the back.”

Amid nationwide protests against police brutality, A&E has canceled one of its most-watched programs, “Live PD,” a reality show that follows police officers in cities around the country in real time. 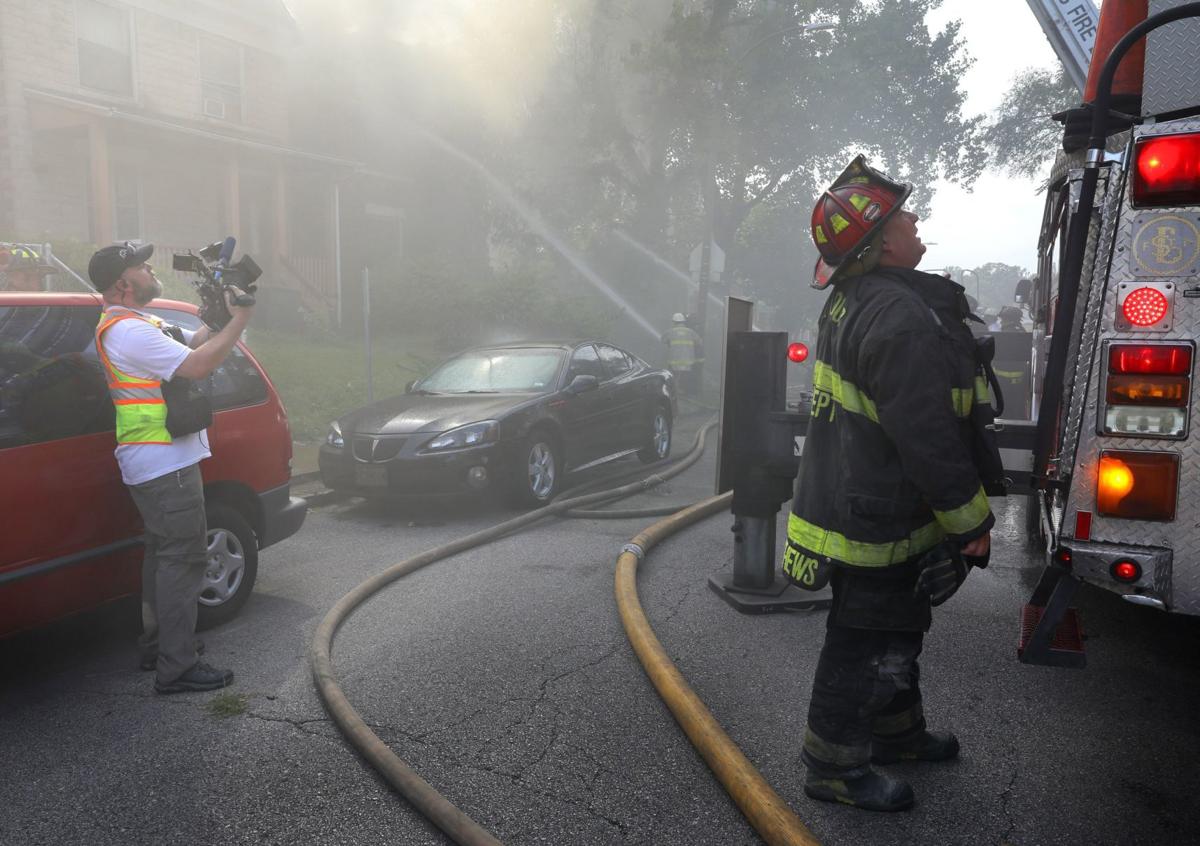 A cameraman for the "Live Rescue" television show documents the scene as St. Louis firefighters put out a fire at a vacant building in the 5900 block of Minerva Avenue on Monday, Aug. 5 , 2019. One firefighter sustained a minor injury. Photo by David Carson, dcarson@post-dispatch.com

An excerpt from the April 2019 contract between Big Fish Entertainment and the St. Louis Fire Department obtained by the Post-Dispatch through an open records request.