The suicide rate went up sharply in Missouri, mirroring a nationwide rise
0 comments
Share this
Subscribe for $1 a month

UPDATED at 4:15 p.m. with additional information.

Suicide rates rose in all but one state between 1999 and 2016, with increases seen across age, gender, race and ethnicity, according to a report released Thursday by the Centers for Disease Control and Prevention. In more than half of all deaths in 27 states, the individuals had no known mental health condition when they took their own life.

In North Dakota, the rate jumped more than 57 percent.

Only Nevada saw a decline — of 1 percent — for the overall period, though its rate remained higher than the national average. 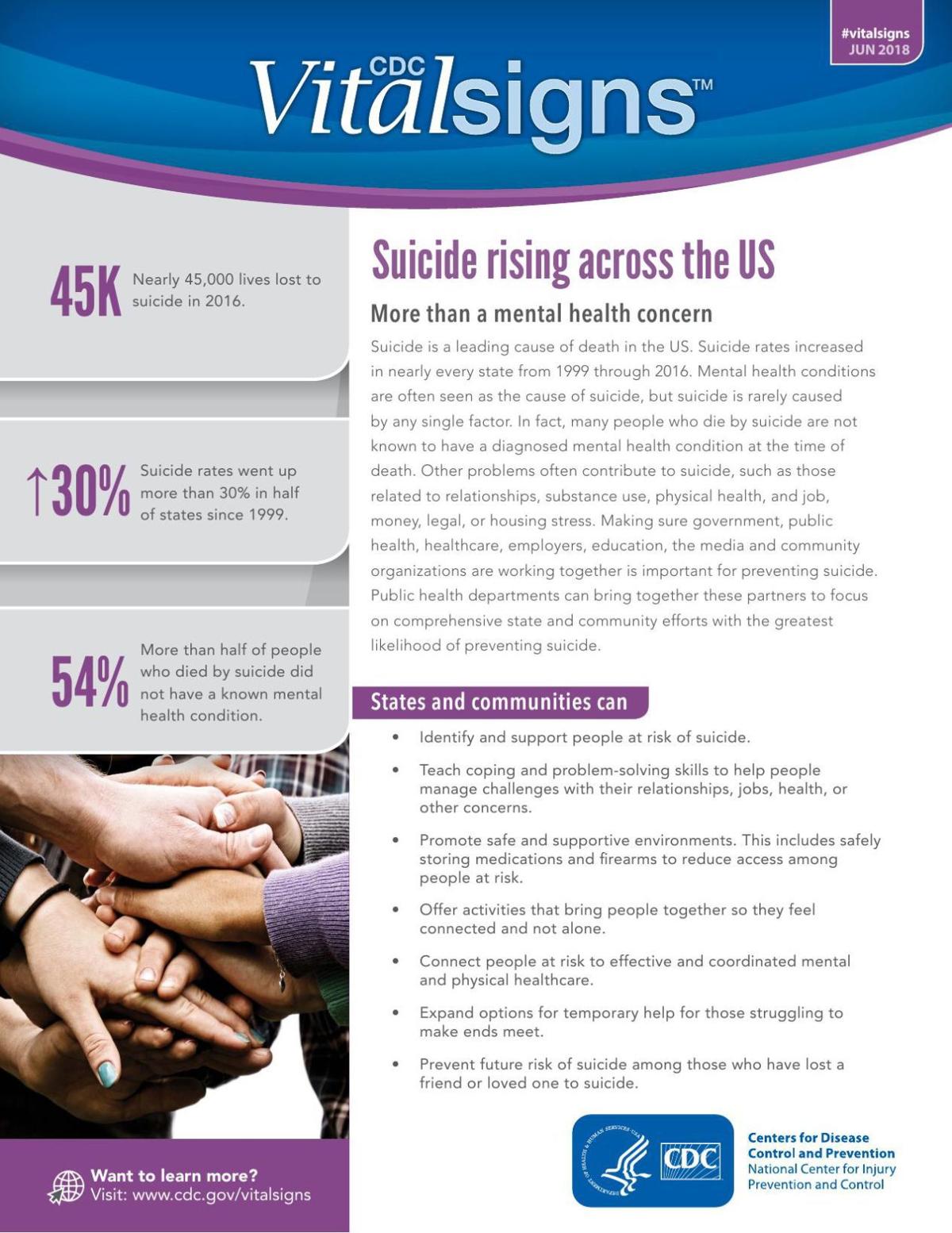 Overall, the most common method used was firearms.

"The data are disturbing," said Anne Schuchat, CDC principal deputy director. "The widespread nature of the increase, in every state but one, really suggests that this is a national problem hitting most communities."

It is hitting many places especially hard. In half of the states, suicide among people 10 years and older increased more than 30 percent.

"At what point is it a crisis?" asked Nadine Kaslow, a past president of the American Psychological Association. "Suicide is a public health crisis when you look at the numbers, and they keep going up. It's up everywhere. And we know that the rates are actually higher than what's reported. But homicides still get more attention."

One factor in the rising rate, say mental health professionals as well as economists, sociologists and epidemiologists, is the Great Recession that hit 10 years ago. A 2017 study in the journal Social Science and Medicine showed evidence that a rise in the foreclosure rate during that concussive downturn was associated with an overall, though marginal, increase in suicide rates. The increase was higher for white males than any other race or gender group, however.

"Research for many years and across social and health science fields has demonstrated a strong relationship between economic downturns and an increase in deaths due to suicide," Sarah Burgard an associate professor of sociology at the University of Michigan, explained in an email on Thursday.

If you or someone you know exhibits warning signs of suicide, call the U.S. National Suicide Prevention Lifeline at 1-800-273-TALK or visit su…

The dramatic rise in opioid addiction also can't be overlooked, experts say, though untangling accidental from intentional deaths by overdose can be difficult. The CDC has calculated that suicides from opioid overdoses nearly doubled between 1999 and 2014, and data from a 2014 national survey showed that individuals addicted to prescription opioids had a 40 percent to 60 percent higher risk of suicidal ideation. Habitual users of opioids were twice as likely to attempt suicide as people who did not use them.

High suicide numbers in the United States are not a new phenomenon. In 1999, then-Surgeon General David Satcher issued a report on the state of mental health in the country and called suicide "a significant public health problem." The latest data at that time showed about 30,000 suicides a year.

Kaslow is particularly concerned about what has emerged with suicide among women.

"Historically, men had higher death rates than women," she noted. "That's equalizing not because men are [committing suicide] less but women are doing it more. That is very, very troublesome."

But Joshua Gordon, director of the National Institute of Mental Health, said that statistic must be viewed in context.

"When you do a psychological autopsy and go and look carefully at medical records and talk to family members of the victims," he said, "90 percent will have evidence of a mental health condition." That indicates a large portion weren't diagnosed, "which suggests to me that they're not getting the help they need," he said.

Cultural attitudes may play a part. Those without a known mental health condition, according to the report, were more likely to be male and belong to a racial or ethnic minority.

"The data supports what we know about that notion," Gordon said. "Men and Hispanics especially are less likely to seek help."

The problems most frequently associated with suicide, according to the study, are strained relationships; life stressors, often involving work or finances; substance use problems; physical health conditions; and recent or impending crises. The most important takeaway, mental health professionals say, is that suicide is an issue not only for the mentally ill but for anyone struggling with serious lifestyle problems.

"I think this gets back to what do we need to be teaching people — how to manage breakups, job stresses," said Christine Moutier, medical director of the American Foundation for Suicide Prevention. "What are we doing as a nation to help people to manage these things? Because anybody can experience those stresses. Anybody."

The rates of suicide for all states and the District of Columbia were calculated using data from the National Vital Statistics System. Information about contributing circumstances for those who died by suicide was obtained via the National Violent Death Reporting System, which is relatively new and in place in only 27 states.

"If you think of [suicide] as other leading causes of death, like AIDS and cancer, with the public health approach, mortality rates decline," Moutier said. "We know that same approach can work with suicide."

Florissant woman accused of giving meth to girl, 13, and sodomizing her