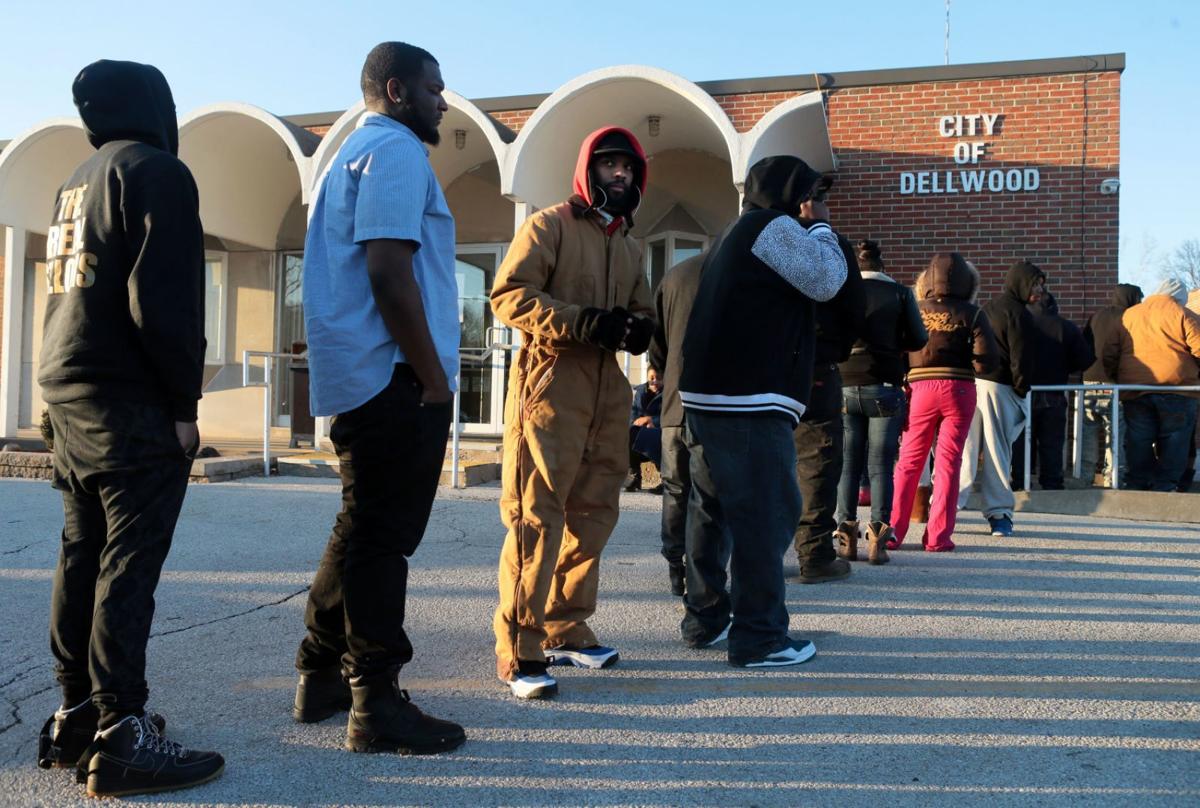 People wait in line for the doors to open for the municipal courts at Dellwood City Hall on March 5, 2015. Photo by Laurie Skrivan, lskrivan@post-dispatch.com 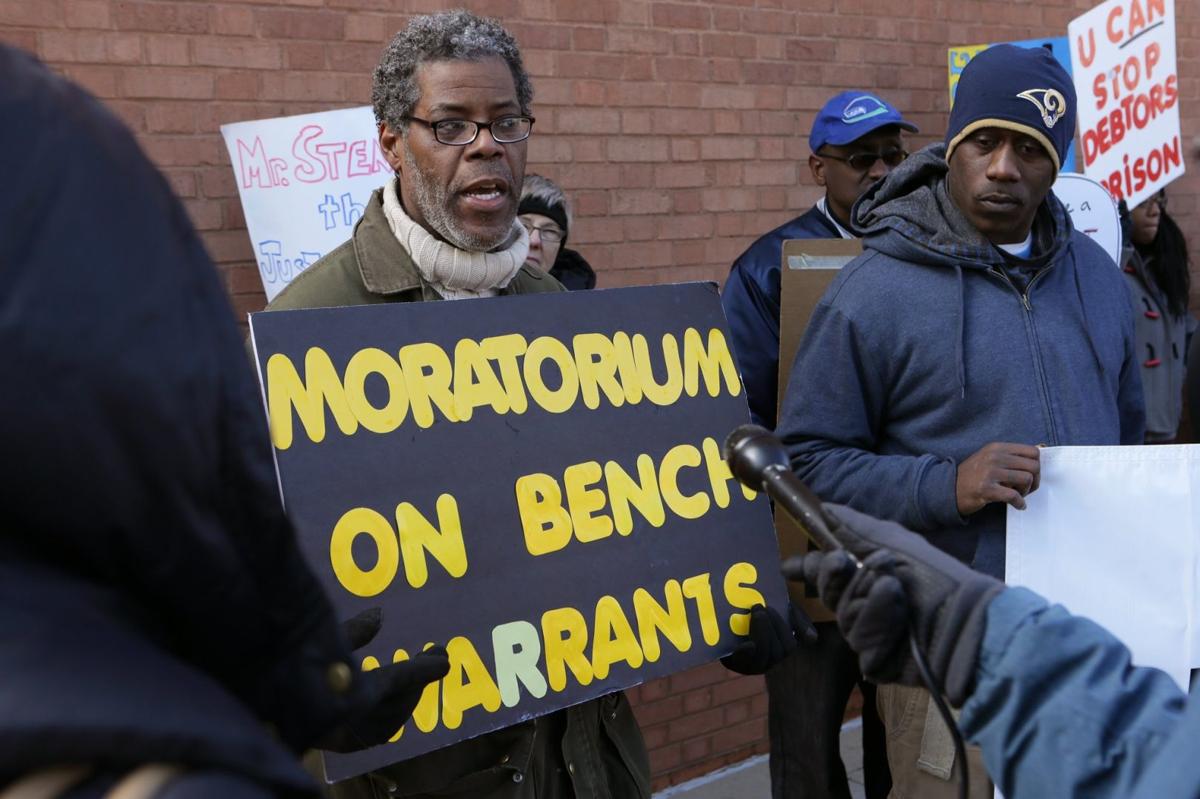 Derek Laney talks to reporters about his negative experiences with the municipal courts during the Missourians Organizing for Reform and Empowerment press conference outside the Lawrence K. Roos County Government Building in Clayton on Monday, Feb. 2, 2015. The press conference called for the reform of the municipal court practices such as jail time for non-violent municipal offenses. Photo by Cristina Fletes-Boutte, cfletes-boutte@post-dispatch.com

More than three years after anger poured out at abusive police and court practices across the St. Louis area, enforcement of traffic is down dramatically and in some places has nearly ceased.

Getting tickets and getting them fixed were two actions that defined life in the St. Louis area, thanks to a revenue-hungry municipal justice system that raised $52 million for municipalities in St. Louis County in the year ending June 2014.

But the numbers of tickets issued by police — and fees and fines collected by courts — have fallen in each of the three years since. In the year that ended June 2017, the municipal courts in St. Louis County brought in just $22 million — a 57 percent drop from the same period three years earlier.

Consider Bellefontaine Neighbors, which deployed a two-officer unit in 2013 to write traffic tickets on Interstate 270. Mayor Robert Doerr said the city ended the unit in 2014 to cover staffing shortages and respond to unrest across the region, and the city never re-established it.

The city’s police chief, Jeremy Ihler, said there had been an effort about two years ago to enforce traffic on a stretch of Interstate 270 in a partnership with the St. Louis County Police through a program with the Missouri Department of Transportation, but he advised city leaders that the action would disproportionately affect minorities.

The city still wants to combat dangerous driving, he said, but through the use of billboards, brochures and public awareness campaigns.

“There are a variety of options police officers can use: a conversation with the driver, a verbal or written warning or a citation are all options,” he said.

The absence of police officers aiming radar guns into traffic on interstates and state highways has been one of the most visible changes in the post-Ferguson landscape. The volume of traffic cases filed has been reduced by about half across the city and county.

The retreat was even more severe in the city of St. Louis, which has seen its municipal court revenue drop 70 percent over that time, to $3 million from $10 million.

“In many instances, a verbal warning is sufficient,” said Gary Hoelzer, the city administrator and police chief in Town and Country. The city, which has stretches of Interstates 64 and 270, has seen the volume of traffic cases cut by 48 percent and its municipal court collections fall 58 percent.

“Our message to our community is, frankly, that we are there to do what we can to make the road safer, but that doesn’t always reflect writing a summons,” said Steve Lewis, the police chief of Ellisville, where municipal court collections were down 83 percent in the year ending June 2017 from the same period three years earlier. A large portion of the decline was because the city stopped using red light cameras in May 2014. But even since then, Ellisville’s collections have dropped by more than half.

Tickets have long been a way to track an officer’s productivity, but Ellisville police under Lewis track officers’ contacts with businesses and people.

That’s a notable change, said Brendan Roediger, a St. Louis University law professor who has sued several municipalities over their municipal court practices. He wondered whether insurance companies that have paid out large settlements on behalf of municipal clients have urged them to ease off from writing tickets or risk losing coverage.

“Just like police have been told to write a lot of tickets, now they’re being told to slow down,” he said.

Municipal officials have openly worried that reducing traffic enforcement would encourage more dangerous driving. In fact, the impact is unknown. Crashes across the area were on the rise in 2015 and 2016. But they were also up nationally, and the spike has largely been attributed to distractions such as texting while driving.

There may not be a single reason for the collapse of the area’s traffic court industry.

In 2015 the Legislature passed Senate Bill 5, imposing new restrictions on court operations and lowering to 20 percent the amount that court revenue could contribute to city budgets. The bill’s sponsor, then-Sen. Eric Schmitt, R-Glendale, wanted a 12.5 percent cap in St. Louis County. The state Supreme Court ruled that the percentage had to be uniform across the state. The law also in effect removed jail as a punishment for nonpayment.

And municipalities are now banned from piling on charges when a defendant does not pay a fine or show up in court. Some municipalities such as Jennings now treat unpaid tickets as any other unpaid bill and close the case after sending the ticket to collection.

The Legislature is weighing proposals to undo some of the provisions of the court reform law, including limits on fines for minor traffic offenses, including court costs in the total revenue cities can raise and removing a requirement that cities allow indigent defendants to perform community service at no cost in lieu of fines. Also, cities would no longer have to file detailed financial reports to the state auditor showing they were in compliance with limits on revenue they could take from traffic cases.

Changes to the state law have had the greatest effect in many of the smaller and poorer communities that had been using court revenue to fund large proportions of their operations. In perhaps the most extreme case, the north St. Louis County village of Vinita Terrace had been funding more than half of its city budget with traffic court revenue. After the reforms went into effect, the village merged into neighboring Vinita Park in 2017.

Fees and fines collected by Pine Lawn’s municipal court are down 91 percent, largely because the city disbanded its police department and joined the North County Police Cooperative. Velda City’s court collected just $72,000 last year, down 78 percent from what it had been.

“We notice that people can get away with anything they want now,” Velda City police Chief Daniel Paulino said. “All they have to say is they can’t come up with the money. … Post-Ferguson, people now believe they are entitled to break the law whenever they want to. That’s the down side.”

But the reductions were not just limited to the cash-strapped north St. Louis County municipalities. Some of the richest municipalities in the area — including Ellisville, Frontenac, Creve Coeur, Ladue, Town and Country and Des Peres — have seen some of the biggest percentage decreases in traffic cases and fines and fees collected.

Some cities say it’s simply not worthwhile to issue tickets now because there is no way to compel defendants to court. And some are advocating for the state Legislature to roll back some of the SB5 provisions.

“It’s difficult to get people into court to pay their tickets now,” said Pat Kelly, executive director of the Municipal League of Metro St. Louis. “You can’t issue warrants or have them arrested.”

He said some municipalities wondered “why do we want to put our resources out on the highway? We’re not going to get most of the tickets because people aren’t mandated to pay them any longer.”

A call to Ladue Police Chief Ken Andreski was returned by an email from a public relations firm that said the department’s focus was on public safety, not generating revenue. The statement said the city enacted a policy in 2010 to emphasize community policing and focus traffic enforcement on hazardous driving.

“Our policing strategies, policies and practices have been refined to ensure that the people who live and visit Ladue are treated respectfully and fairly,” the statement said.

The top 10 declines in revenue from municipal court collections between 2014 and 2017.

Source: Office of the State Court Administrator, State of Missouri

The city of St. Louis and surrounding municipalities, both rich and poor, have backed off their longtime practice of using abusive police and court practices to pad their bank accounts. The court reforms that brought about the changes are working and should not be undone, as state Sen. Bob Dixon, R-Springfield, proposes to do.

Red-light cameras could make a return to St. Louis streets

Red light cameras in St. Louis and most of the rest of Missouri haven’t been used since the state Supreme Court in 2015 effectively put new restrictions on how cities employ them.

The top 10 declines in revenue from municipal court collections between 2014 and 2017.

People wait in line for the doors to open for the municipal courts at Dellwood City Hall on March 5, 2015. Photo by Laurie Skrivan, lskrivan@post-dispatch.com

Derek Laney talks to reporters about his negative experiences with the municipal courts during the Missourians Organizing for Reform and Empowerment press conference outside the Lawrence K. Roos County Government Building in Clayton on Monday, Feb. 2, 2015. The press conference called for the reform of the municipal court practices such as jail time for non-violent municipal offenses. Photo by Cristina Fletes-Boutte, cfletes-boutte@post-dispatch.com