FERGUSON • As soon as Dr. Dan Wentz took a look at Anak’s pearly whites, he knew the 106-pound police dog was on the verge of a career-ending injury.

The black German shepherd’s bottom canines looked thin, possibly in need of replacement. A specialist confirmed the problem and broke the news to Anak’s handler, Ferguson Officer Greg Casem, who knows that sometimes a police dog needs a bite as well as a bark.

Training, and an obsession with tennis balls, took their toll on Anak, 6 years old. Replacing the teeth with titanium crowns would cost $1,700.

Before the city even had a chance to decide between paying and retiring the dog, Wentz and his wife, Dr. Julie Wentz, started an online donation drive to cover the cost — and pay unexpected veterinary needs of the department’s three other dogs.

“Two years ago, I never would have considered doing this in Ferguson,” Dan Wentz said Monday from his office at the Ferguson Animal Hospital. “But given all that’s happened, the tax increases and the drop in the (police) force, I want to make sure we are doing what we can to help keep these dogs on the street.”

The force dwindled to 36 officers from 53 after the controversial killing of Michael Brown in 2014 ignited national protests. City voters passed two tax referendums and are dealing with costs of meeting demands in a federal consent decree over police and municipal court practices.

Among the concerns were the police dogs which, the Justice Department alleged, were used more liberally than necessary and with “out-of-proportion” force.

Its report says dogs were used in some situations in which they weren’t needed, and used against children, people known to be unarmed and those who committed low-level crimes, such as trespassing.

“They appear to use canines not to counter a physical threat but to inflict punishment,” the report reads.

It also says that every police dog bite in which race was known was inflicted upon an African-American.

Police Chief Delrish Moss said that since the Justice Department report, officers are forbidden from using dogs at protests.

“It can be very reminiscent of the 1950s and 1960s, and so that was a very easy fix,” Moss said, referring to memories of police dogs attacking peaceful civil rights demonstrators. “We didn’t want even the appearance that we were using the dogs to quell or deal with protesters.”

“Ferguson is a very giving community, and this doctor has a lot of passion for the police department, and this was his way of saying the city has had some budgetary issues, let me find a way to continue the services I do for the dogs,” Moss said.

Casem became a Ferguson canine officer in 1998, and Anak is his third dog, the son of his second. Anak mean’s “child” in Casem’s native language of Tagalog.

It is common for police dogs to be trained to respond to commands in German or Dutch, to help keep them under their handler’s control. “But to my knowledge, we’re the only canine team using my language,” Casem said.

Casem said he saw the Ferguson canine unit grow to four under former Chief Thomas Jackson’s administration, to ensure every shift had a dog available.

He recalled several examples of how the dog’s mere presence led to peaceful outcomes. In one, Casem said, a suspect called 911 to say he was surrendering after hearing that a canine unit was on the way.

Casem noted Anak’s work as a police ambassador at schools. He said he gets laughs at schools when children hear him praise Anak with the Tagalog phrase for good, “ma bu tay,” which sounds like “my booty.”

Once Anak has his titanium chompers, Casem said, he may teach the kids another: “makintab ngipin,” for “shiny teeth.”

Kristen Taketa of the Post-Dispatch contributed to this report.

Rep. Tricia Derges was convicted Tuesday of conducting fraud at medical clinics in southwest Missouri in part by falsely claiming that she was giving patients stem cell treatments.

The boy who was driving is the only survivor. He is 13 years old.

Are teens and scooters really the problem in downtown St. Louis?

St. Louis hits a 10-year high in underage arrests in the downtown area. Residents and business owners say police, parents can do more.

A joint statement, signed by more than 80 district attorneys, argued prosecutors can use “immense discretion” not to put limited resources toward criminalization of “personal medical decisions.”

Dawan Ferguson is set to be tried in the presumed death of his 9-year-old son, Christian, who had a rare genetic disorder and disappeared in 2003.

The driver, who took the vehicle without permission, was the only one to survive Monday's crash. His cousin, a 9-year-old boy, died, as did two unrelated 13-year-olds.

Pedestrian dies after an SUV hits him on Highway 94 in St. Charles County

Raymond R. Rooney Jr. died at a hospital after being struck Tuesday night. 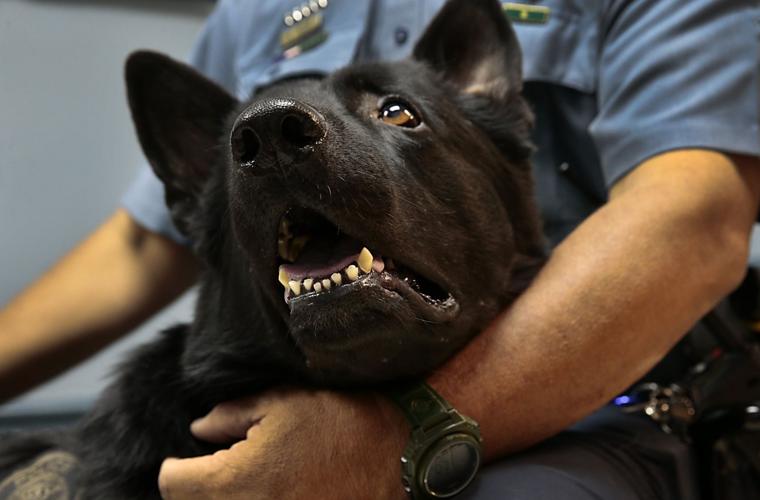 Anak, the police dog of Officer Greg Casem of the Ferguson Police Department, has his lower canine teeth filed down after having root canals on the teeth on Monday, Sept. 19, 2016. He will soon be fitted with titanium crowns, after the teeth wore down from years of training and work. Photo by Robert Cohen, rcohen@post-dispatch.com 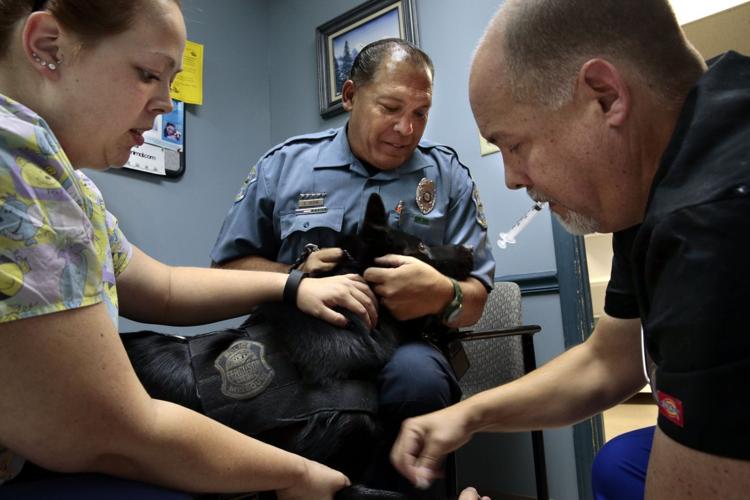 Dr. Daniel Wentz of the Ferguson Animal Hospital, prepares to draw blood from Anak, the police dog of Officer Greg Casem of the Ferguson Police Department, during his annual exam on Monday, Sept. 19, 2016. Melisa Hutchings holds his leg at left. Anak will soon receive titanium crowns after having root canals done on his lower canines. His teeth were worn from years of training. Photo by Robert Cohen, rcohen@post-dispatch.com 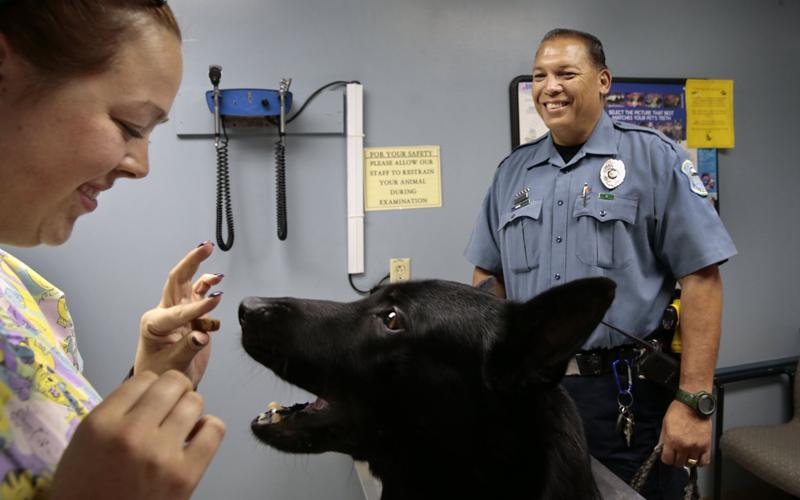 Melisa Hutchings of Ferguson Animal Hospital gives treats to Anak, the police dog of Officer Greg Casem of the Ferguson Police Department, before his annual exam on Monday, Sept. 19, 2016. The dog will soon have titanium crowns implanted on his lower canines after having root canals on the teeth. His canines were worn from years of training. Photo by Robert Cohen, rcohen@post-dispatch.com 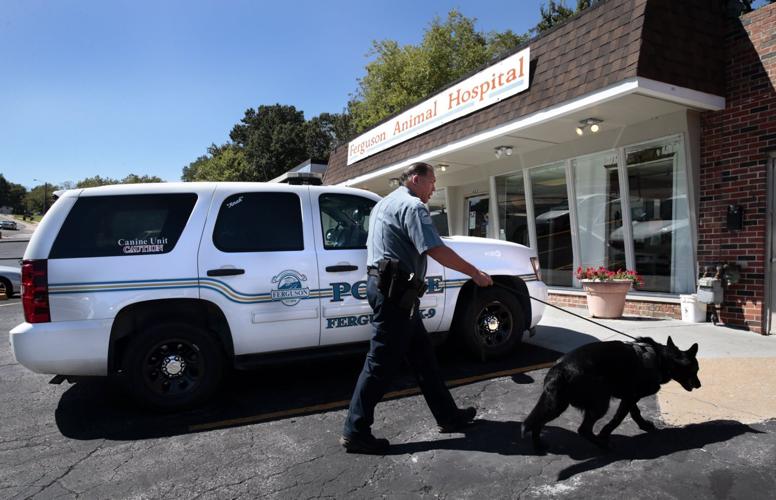 Anak, the police dog of Officer Greg Casem of the Ferguson Police Department, finds his way to the front door of the Ferguson Animal Hospital for his annual exam on Monday, Sept. 19, 2016. The dog will soon have titanium crowns implanted on his lower canines after having root canals on the teeth. The teeth were worn from years of training. Photo by Robert Cohen, rcohen@post-dispatch.com