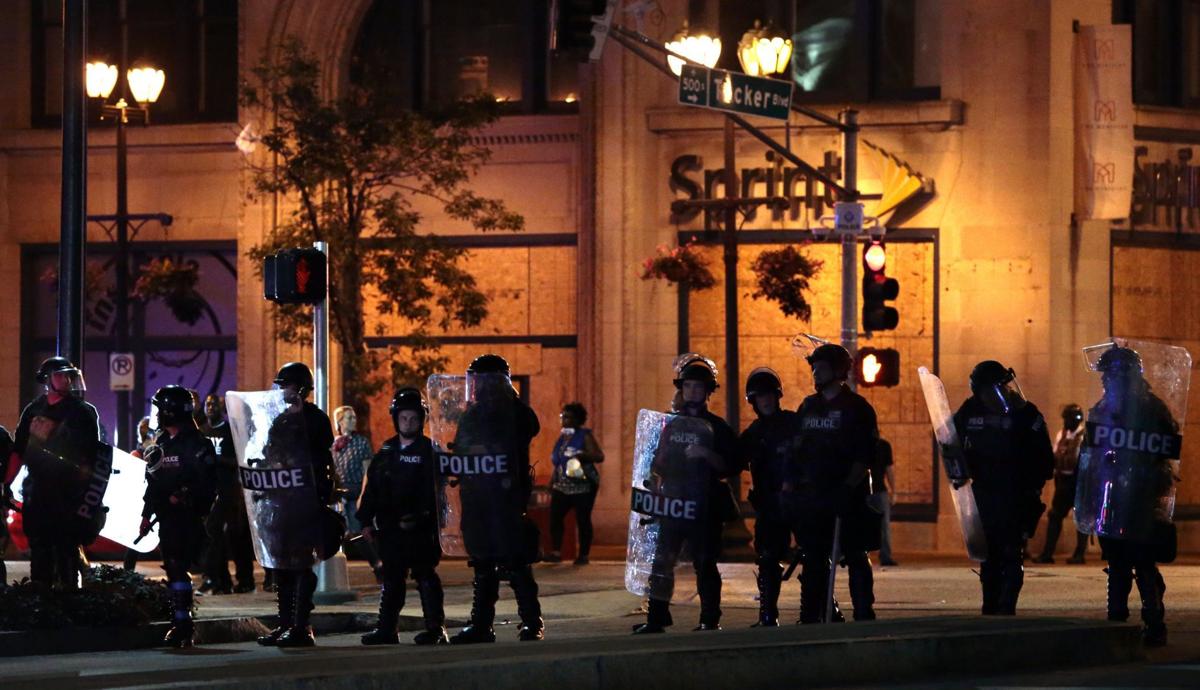 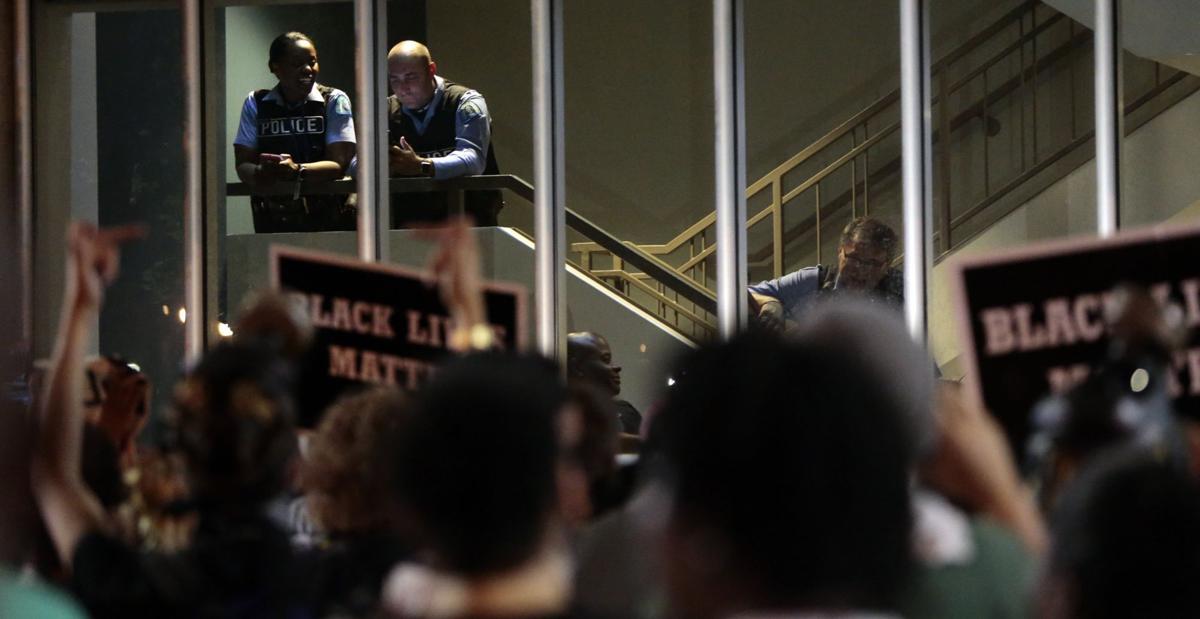 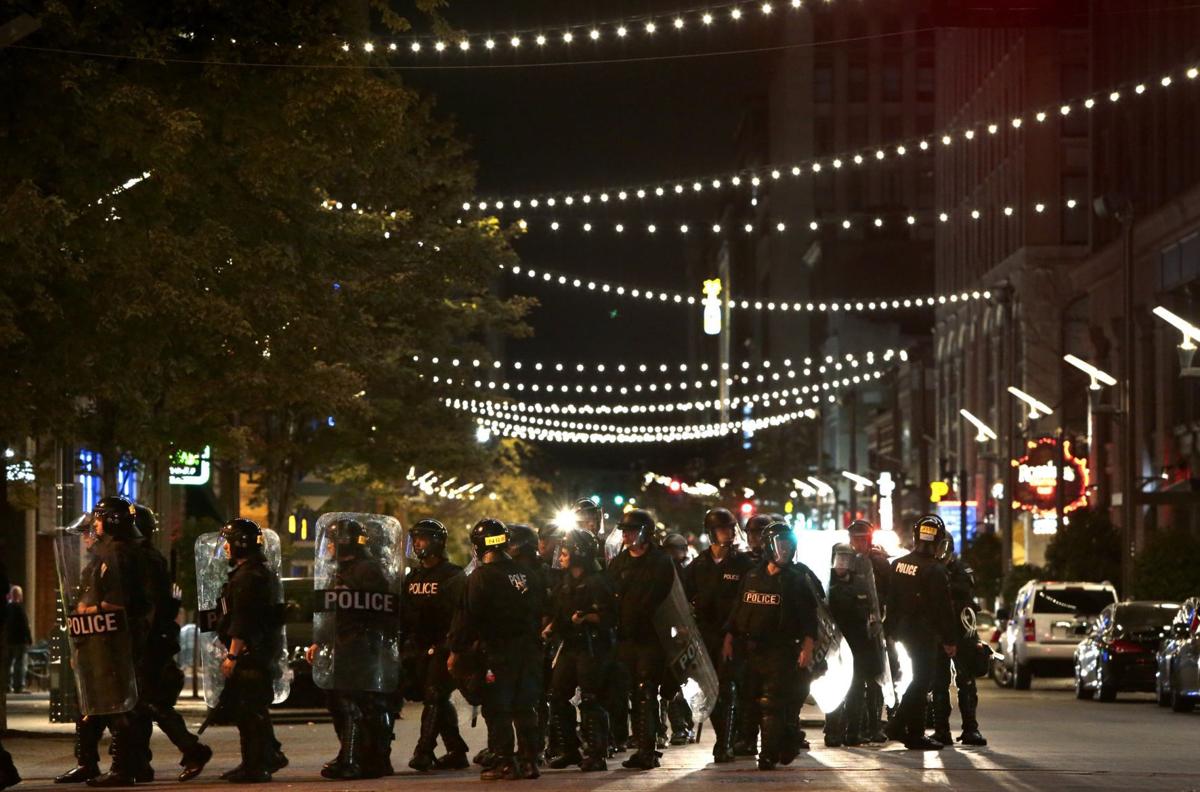 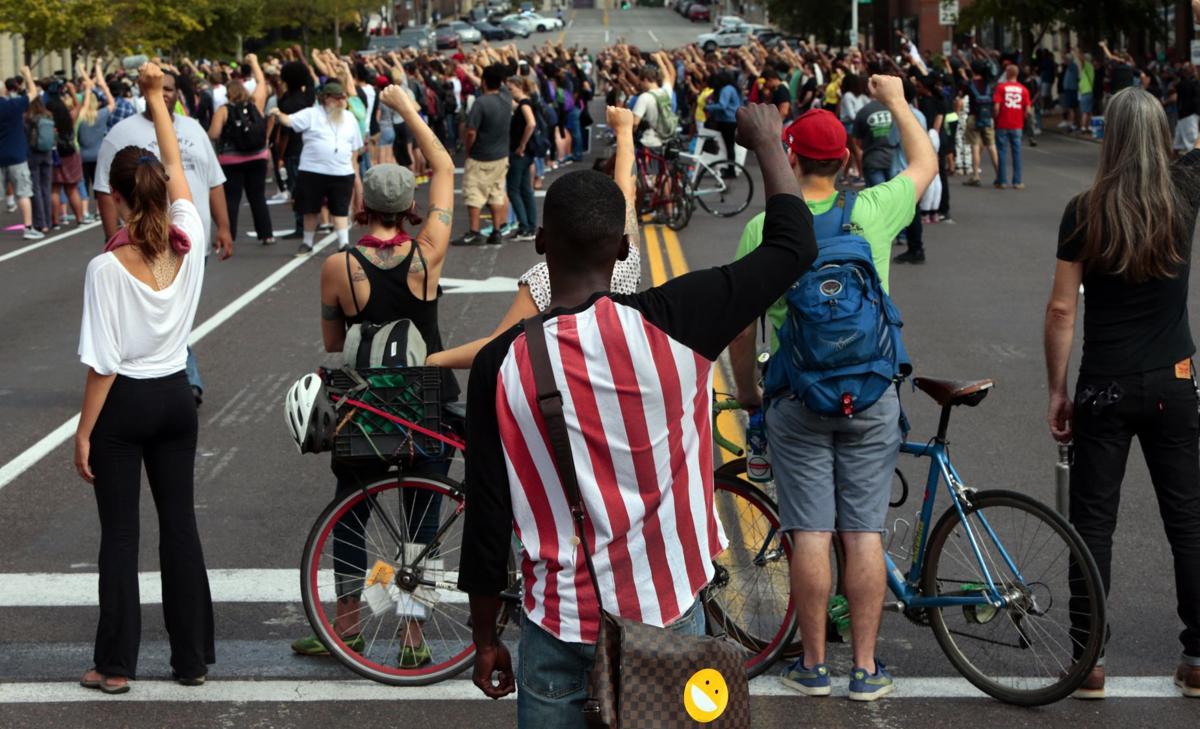 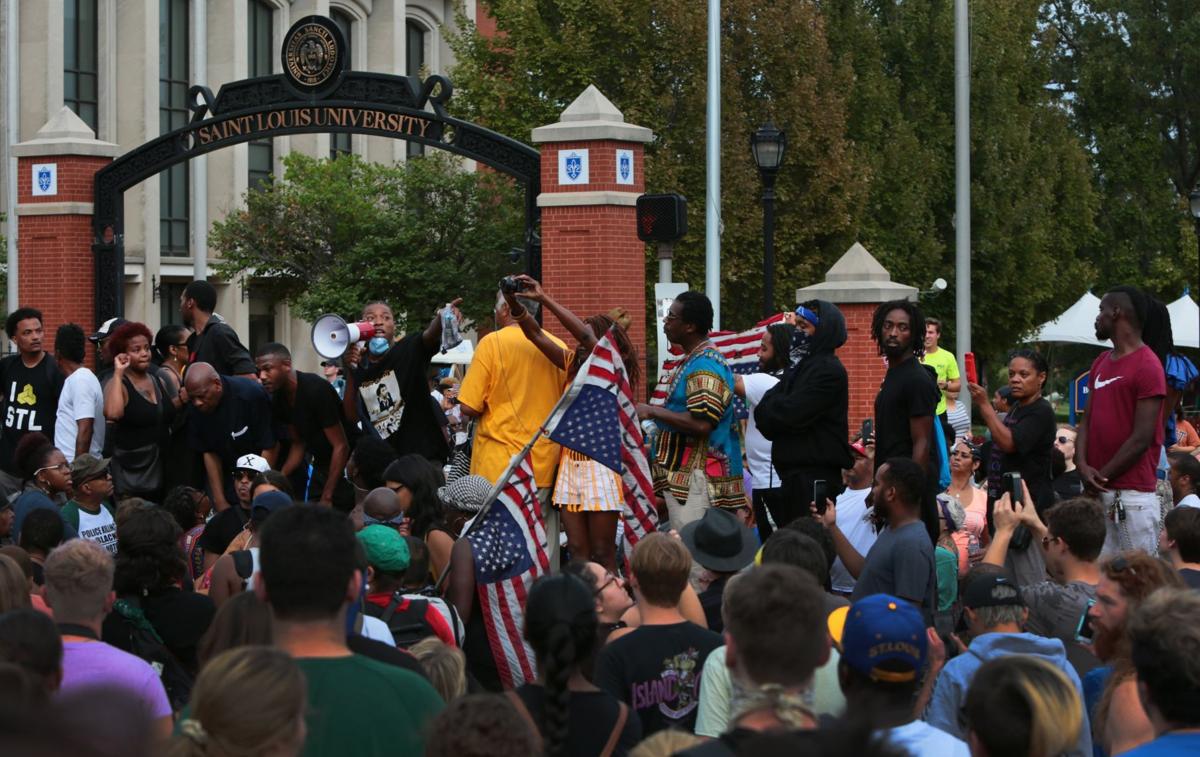 Protesters stand on the median wall on Grand Avenue as they stop their march in front of St. Louis University on Sunday, Sept. 17, 2017. Photo by Robert Cohen, rcohen@post-dispatch.com 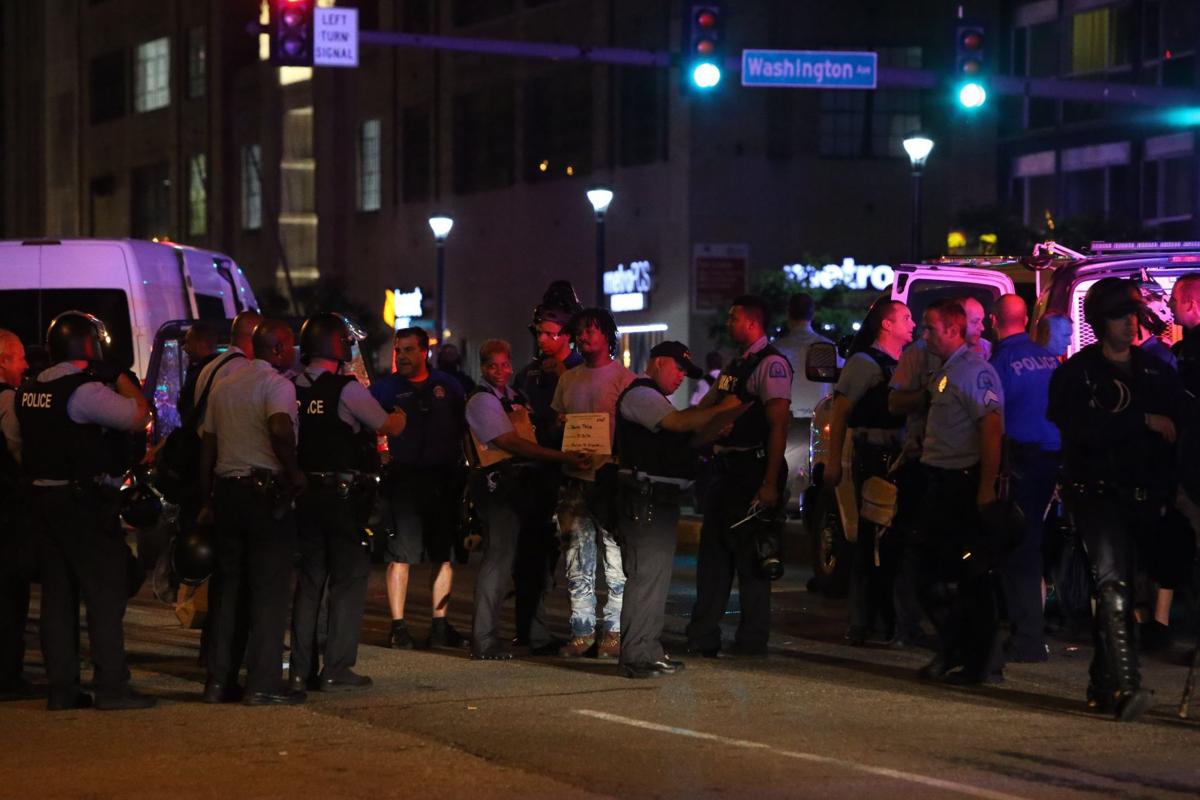 Gov. Eric Greitens is eager to show he’s not like a former governor whom he accused of tolerating looting and arson in Ferguson. So much so that his Facebook post Sunday about vandalism in the Delmar Loop dropped any claim to formality.

On Sunday night, as police officers marched downtown, a Post-Dispatch photographer heard them chant a refrain most often heard at Ferguson protests: “Whose streets? Our streets.”

Michael Brown’s death in 2014 sparked months of protests over the treatment of African-Americans in the criminal justice system. The language of many community conversations since then has reflected nuance and understanding, such as in the Ferguson Commission report.

In fact, a story in the St. Louis American the day before the not-guilty verdict was announced in the Jason Stockley murder case, O’Toole urged people who might have been dreading another round of unrest not to forget that protesters were trying to “shine the light on the injustices they see and feel.”

But after three days of protests, and some vandalism and attacks on police officers, the language of the establishment has mirrored the angry language of the protest movement.

Blame the Twitterization of political discourse, which has infected the words people use in 2017, said Mitchell McKinney, professor of political communication at the University of Missouri, who researches political rhetoric and civic engagement.

Protests are frequently marked by taunting and insults toward police, even by those considered to be peacefully exercising their rights to free speech. A Post-Dispatch reporter captured a brief video of a man standing at the skirmish line on Delmar Boulevard on Saturday night, nose to police shield, shouting at an unseen officer: “You and me go one on one, man on man, if you got the guts, the nuts, the heart, the dignity.”

To some, such verbal confrontations are akin to violence. To others, they are a means of communicating despair and outrage about inequality.

Officials using similar words “does not seem like a tactic that is intended to keep the peace,” McKinney said.

“It seems like government officials realize they have this megaphone of social media, and for it to be useful, for it to catch on, to be spread widely, there is a certain language that should be used,” he said. One example is Greitens’ statement on Facebook, which “doesn’t sound like an official press release from the governor’s office.”

He added, “We now expect our leaders to be advocates of one side and denigrate the other side. From the president on down, that’s what we see all too often. Whether it’s a Facebook post or a 140-character tweet, it’s easier to make a pithy attack than to formulate a nuanced message that is intended to acknowledge multiple perspectives.”

A nuanced message “probably runs the risk of alienating your base. You know what they want to hear, and you don’t want to upset them.”

Police co-opting a Ferguson protest chant was an example of a group reclaiming words they felt oppressed them, said John Baugh, a linguist at Washington University in St. Louis.

He said the police use of the chant was “a way to reclaim their authority.”

“Clearly, their usage of that expression was out of exasperation and reflecting the fact that the options they had available to challenge what the protesters were doing was limited.”

“Residents of the St. Louis region ... have a legitimate right to question how their police department uses force against them,” the letter said. “Many people see the chanting of ‘Whose Streets?’ as an attempt to intimidate protesters and raise tensions at the demonstration.”

Some officers also were upset by the chant.

Sgt. Heather Taylor, president of the Ethical Society of Police, an association of 252 city police officers, mostly African-Americans, said in a statement that the “chant goes against the very code of ethics we swore to abide by. Whether we agree with demonstrators, protests or acts of violence, it is our job to do our job free of personal bias.”

She said the sentiment behind it was common in the department and reflected deep differences within.

Before the verdict, the ethical society released a statement calling for Stockley’s conviction. That day, another sergeant posted a news story about the society’s call to his Facebook page. The wife of Stockley’s supervisor chimed in with the comment: “Let the racist (expletive) BLEED OUT. Hell is waiting for her.”

The wife said in a brief interview that Taylor was “a racist person and the harsh words that are going back and forth are of her doing” because the ethical society did not back Stockley.

Taylor’s response: “If you can’t voice your opinion without a layer of anger or hate, we’ll never get anything done.”

Suppressing citizens' political opinions is not the police's job

I was appalled to read that our police chief believes the St. Louis police "owned tonight" during the protests ("Protest chants, tone adopted …

Protesters stand on the median wall on Grand Avenue as they stop their march in front of St. Louis University on Sunday, Sept. 17, 2017. Photo by Robert Cohen, rcohen@post-dispatch.com