Big incentive for school attendance: Cash
Share this
{{featured_button_text}}
1 of 3 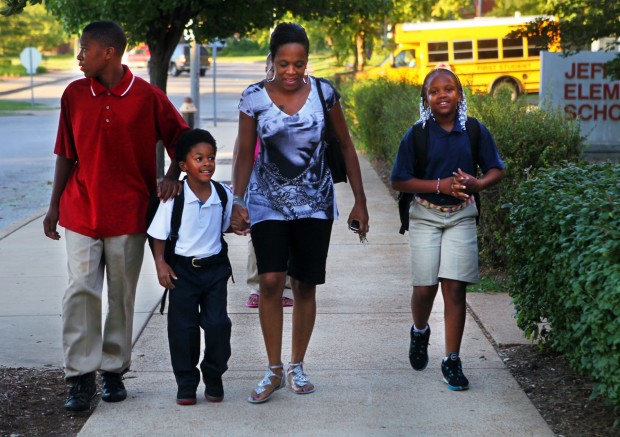 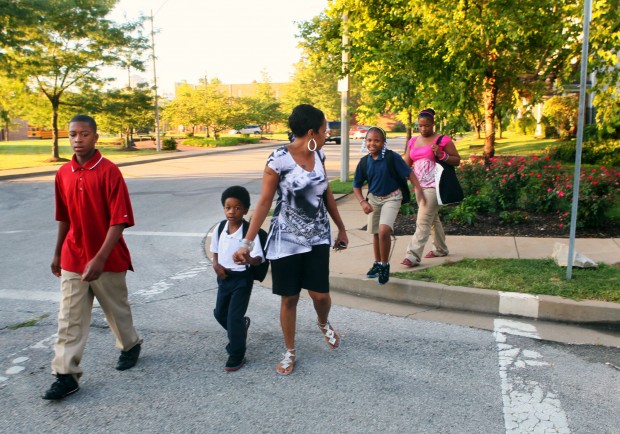 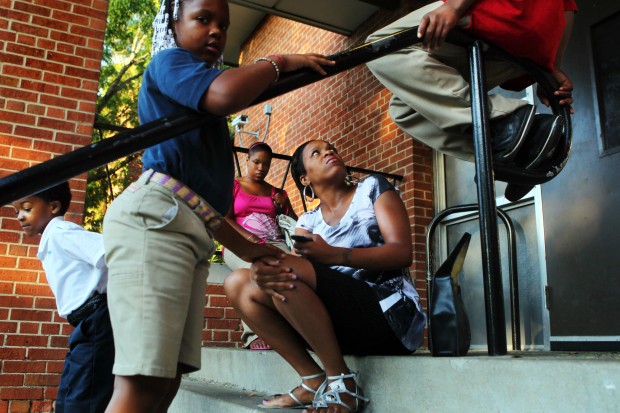 August 27, 2010--Stacey Wright sits with her kids outside Jefferson Elementary School Friday morning as they wait for the doors to open. Her kids from left to right are Doreon Dubose, 5, Diamond Lofton, 8, Ebony Wright, who attends Vashon high school, and Everest Wright, 12 (sitting on on the railing.) Emily Rasinski erasinski@post-dispatch.com
BY ELISA CROUCH • > 314-340-8119

ST. LOUIS • Stacey Wright had more than a dozen choices when it came to enrolling three of her children in an elementary school, from charters to magnets to traditional public schools in every corner of the city.

She chose Jefferson Elementary School, the brick St. Louis public school across the street. And for that, she may get $900.

For the first time, a local organization is offering parents a cash incentive to enroll their children at Jefferson. The money is limited to students who didn't attend the school last year. To get it, the kids must finish this semester with near-perfect attendance and receive no out-of-school suspensions; the parent must attend three PTO meetings. The program is being offered to families in three mixed-income housing complexes surrounding the school, where most of the students live.

Wright, an in-home caregiver, recently moved with her children to north St. Louis from Oxford, Miss. She's eager to get involved at Jefferson, located at Hogan and O'Fallon streets.

"It's an awesome deal," Wright said. "A lot of us can use that money. It doesn't sound like a lot, but it makes a big difference."

Paying families for their children's behavior and attendance is part of an ongoing debate in a half dozen cities. Kids themselves also have been paid for everything from grades on tests to the number of books they read. A Harvard University study in July showed that such incentives improve classroom behavior — but they don't necessarily raise test scores. The study looked at incentive programs offered to 38,000 students at 261 low-performing urban schools in four cities.

Proponents say the cash rewards are no different from offering college scholarships to top achievers at a high school, and that low-income families need the extra help. Critics counter that the cash prizes fail to address problems that lead to truancy and poor test scores, such as bad teaching or a dull curriculum.

"It's almost like bribing (the students) instead of correcting the core problems," said Garrett Duncan, an associate professor of education at Washington University.

At Jefferson Elementary, the $300 incentive per child is offered by Urban Strategies, a nonprofit organization based in St. Louis. For years, it has partnered with McCormack Baron Ragan Management, the development company that manages Murphy Park, The Brewery and O'Fallon, the three housing complexes surrounding the school.

In 1998, Urban Strategies raised money for renovations at Jefferson. This year, it's paying to train teachers in how to conduct at-home visits. The organization is offering $250 to the four teachers at Jefferson who make the most of them.

"We have deep roots in this neighborhood and in this school," said Kate Casas, senior project manager for Urban Strategies.

This month, Nathalie Means, the principal at Jefferson, mailed fliers and called parents about the $300 incentive program. Seventeen families enrolled their children as a result, giving Jefferson 22 new students, Means said. Those who transferred from other schools in St. Louis mostly came from Ethel Hedgeman Lyle Academy and Paideia Academy, two charter schools that did not reopen this year.

Not every parent jumped at the money.

"There were some parents who said, 'We like our school, we're not going to move back,'" Means said. "With the behavior piece in there, we had some families who said, 'I don't know if my kid can make it.'"

Means had hoped for 30 families. Enrollment at Jefferson is on the decline. It dropped to 246 last year, from 436 in 2005-06, according to the Missouri Department of Elementary and Secondary Education.

Earlier this month, parents got letters informing them that the school fell short of annual progress goals in the Missouri Assessment Program. Less than 15 percent of students passed the reading and math sections on last year's statewide test. The letter offered parents the option of transferring to other schools in the district.

Means said she fears what might happen if more students do just that. Last year, the school district closed 14 schools. Jefferson is one of a handful of "pilot" schools that give the principals more autonomy and classroom freedom to improve literacy. But to have a future, it needs more students and better test scores.

"There's always the fear that a school might close," Means said. "We came up with this as a way to start the incline."

If the cash makes a difference at Jefferson this semester, Urban Strategies hopes to offer it to more parents at the school, Casas said. The organization also would like to expand the incentive to nearby Dunbar Elementary School, and to other cities where it has partnerships.

Rewards in schools are nothing new. Suburban districts for years have offered pizza coupons, tickets to amusement parks and baseball games for those who make the honor roll or read a certain number of books over the summer.

In St. Louis Public Schools, the district has rewarded kids who attend the first day of school by entering them in drawings for tickets to sporting events. Until recently, Maritz Inc., the motivational and corporate travel company in Fenton, gave students at school the first week chances to win a big screen television, stereo equipment, T-shirts and rulers.

The $300 incentive at Jefferson shouldn't be troubling, said William Tate, professor of education at Washington University.

"What they're really saying to these kids is your presence on a regular basis is important," he said. "It's so important we're going to reward you for doing it."

Wright said she's going to do all she can to ensure that she and her three children at Jefferson do their part in earning the $900. Getting to the PTO meetings should be no problem, she said. The money would go a long way to help her family at Christmas, when finances are especially tight.

Urban Strategies plans to give parents their money on Dec. 15, at the last PTO meeting of this year.

"I'm not going to give up," Wright said. "It could pay some bills and help my kids out with school clothes."

Some parents cash in on their kids' good behavior, attendance

For each child with good behavior and near-perfect attendance, parents at this school collect $300.

Rich and Paula Simpson have been trying for more than two years to convince the Fox School District that excluding their daughter from certain activities because of her severe allergy to peanuts is no different from excluding a student in a wheelchair.

CHICAGO • Emergency room visits for school-age athletes with concussions have skyrocketed in recent years, suggesting the intensity of kids' s…

August 27, 2010--Stacey Wright sits with her kids outside Jefferson Elementary School Friday morning as they wait for the doors to open. Her kids from left to right are Doreon Dubose, 5, Diamond Lofton, 8, Ebony Wright, who attends Vashon high school, and Everest Wright, 12 (sitting on on the railing.) Emily Rasinski erasinski@post-dispatch.com
© Copyright 2021 STLtoday.com, 901 N. 10th St. St. Louis, MO | Terms of Use | Privacy Policy
Powered by BLOX Content Management System from TownNews.com.
You don't have any notifications.