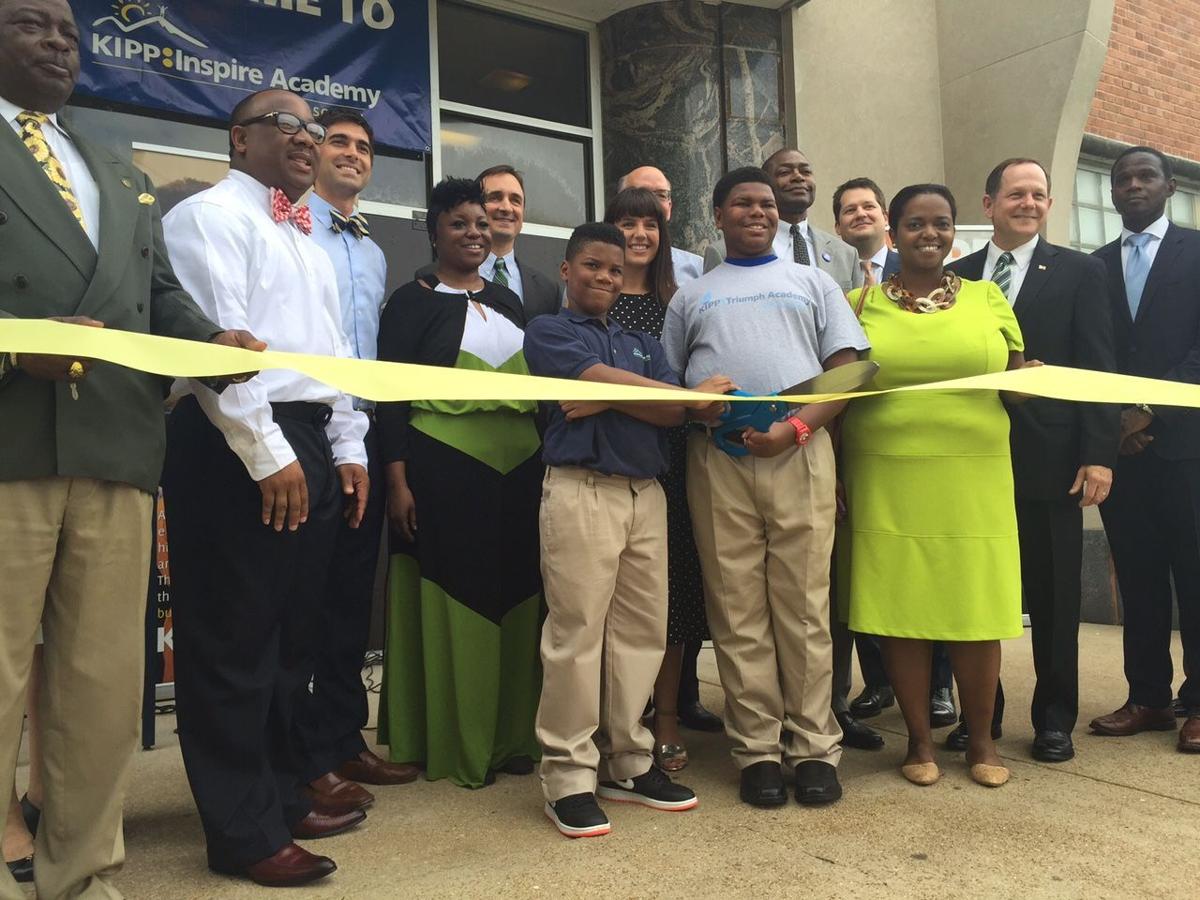 Students parents and civic leaders gather for the ribbon cutting of the new campus of KIPP Inspire Academy on July 22, 2015. Photo by Elisa Crouch of the Post-Dispatch 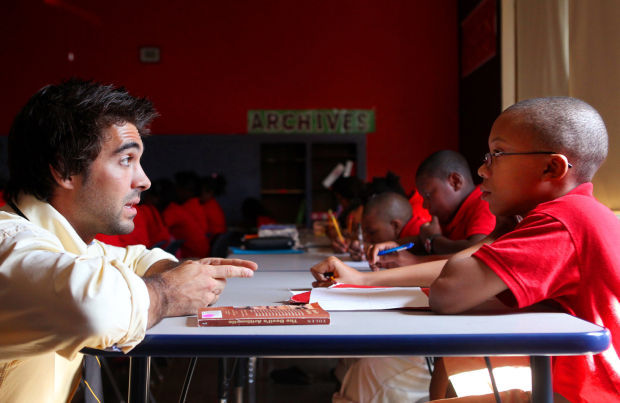 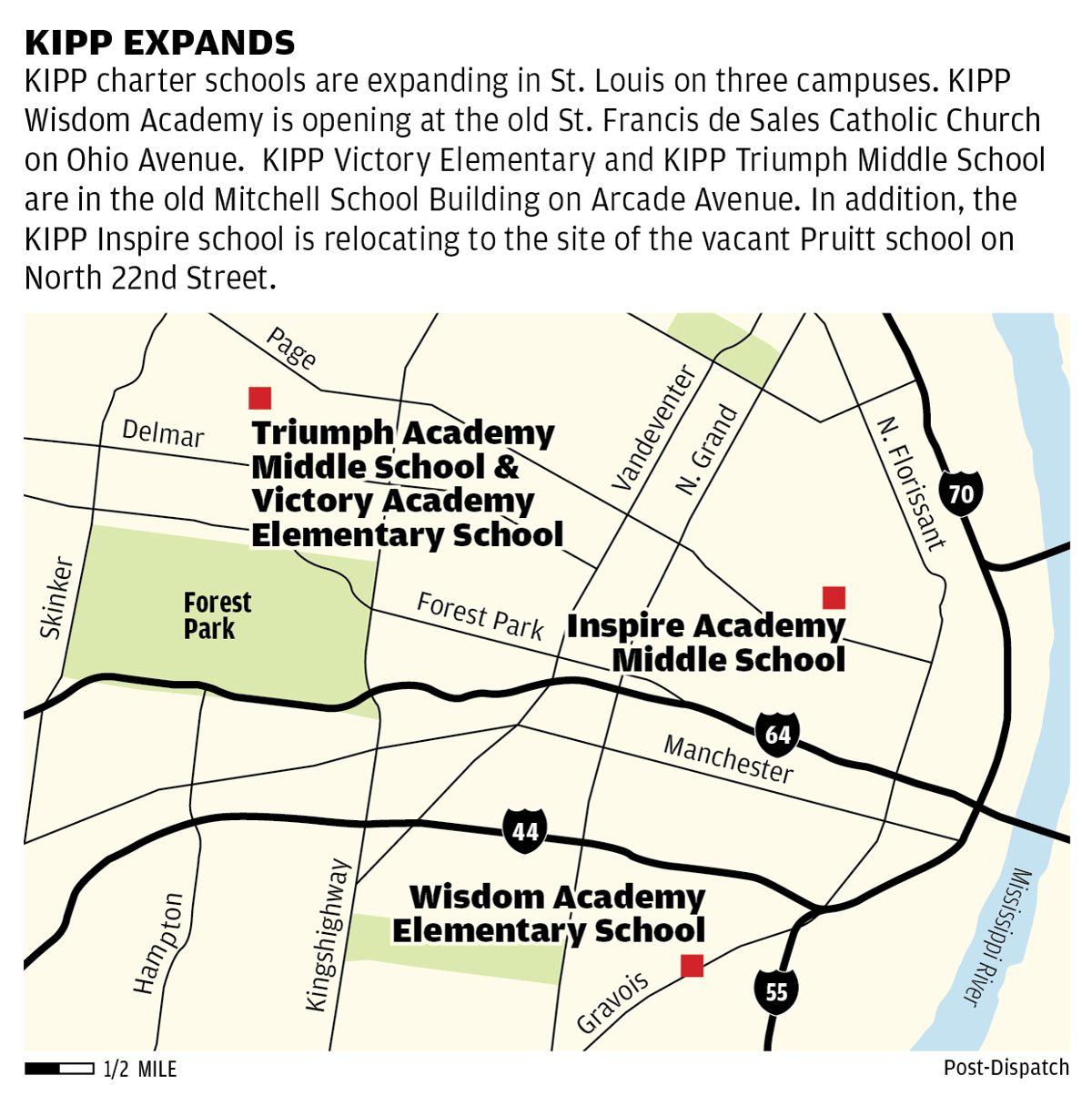 ST. LOUIS • It’s a rare event that draws city schools Superintendent Kelvin Adams and Mayor Francis Slay as dignitaries to the same ribbon cutting — much less for a charter school.

Slay is an advocate of charter schools — putting him at times at odds with some in the St. Louis school district.

But on Wednesday, the two men stood side by side as middle schooler Miles McVay cut a ribbon to celebrate the relocation of the high-performing KIPP Inspire Academy into a once-vacant city school building. The Pruitt school, at 1212 North 22nd Street, had been empty since 2010.

“This is not about us-versus-them,” Slay said, referencing the charter-versus-district rivalry that some in the city feel. “It’s about everyone working together, and collectively, to improve the quality of education and utilizing the buildings which have been empty and vacant for so long.”

About 75 educators, elected officials and supporters from the business community showed up to celebrate the growing partnership between the school district and KIPP — short for the Knowledge is Power Program.

It remains the only one of its kind in St. Louis. The school district provides the charter school network free use of its school buildings. In exchange, test score data collected at KIPP’s St. Louis schools will be reflected starting this year in the data of St. Louis Public Schools, potentially strengthening the performance of the city school system.

“In some ways,” Adams said, “we both are moving out of our own ideologies and moving into an ideology of, if we do this, how many kids in St. Louis will be impacted in a positive manner?”

The Special Administrative Board gave unanimous approval to the agreement linking the school district and KIPP in 2013. It also allows for collaboration in areas such as professional development for teachers.

“Because of this, we’re able to serve more kids in a more powerful way,” said Kelly Garrett, executive director of KIPP St. Louis.

For starters, KIPP doesn’t have to pay rent, freeing up more money for classroom instruction. The organization spent about $2 million renovating the Pruitt school. The district kicked in about $200,000.

KIPP organizers have long expressed their intent to create a cluster of schools in St. Louis, where nearly 19,000 children lack access to a quality education, according to a 2014 study.

Last year, the KIPP Victory Elementary School opened inside the district’s old Mitchell School building, 955 Arcade Avenue, which had been unused since 2008. Next week, KIPP Triumph Middle School also will open with fifth-graders in the same space.

And in the St. Francis de Sales Catholic Church building in Fox Park, KIPP Wisdom Elementary School is about to take root, starting with kindergarten and first grade.

This fall, about 1,000 children will be enrolled in the four KIPP schools.

The time and intensity of the KIPP program is greater than most traditional public schools.

KIPP students have longer days and school years than their peers in traditional public schools. They are overwhelmingly from low-income and minority families. Yet they are expected to perform at the same levels as their peers in more affluent schools, making KIPP schools a flashpoint for some who question whether meeting such goals is possible.

Some accuse the charter school organization of “creaming” promising students with supportive parents.

“I’ve heard nothing but good things,” said Armondo Fuqua, Miles’ father, who visited a KIPP school in Houston and decided Miles needed to be at one. He likes the structure. He especially likes that the focus is college.

“I want him to be as smart as possible,” Fuqua said of his son.

At KIPP Inspire, fifth- through eighth-graders have shown gains most years as they move through the school.

Inside the building behind the crowd, 75 students who will be new to KIPP Inspire Academy this school year were going through orientation. Classes start on Monday.

The charter school's intent is to empower girls and equip more of them to enter into STEM careers.

But attorney for two students says more investigating is needed.

As the district opens its empty schools to the public, some are shocked by their condition.

St. Louis Public Schools is collaborating with KIPP to open a charter school in the old Mitchell School in the West End.

Charter would get use of empty school buildings, district would get to count charter students' test scores, attendance rate.

Students parents and civic leaders gather for the ribbon cutting of the new campus of KIPP Inspire Academy on July 22, 2015. Photo by Elisa Crouch of the Post-Dispatch